VISITORS TO THE BIRD ROOM AND DECK

Last Saturday I spent a sometime watching birds from our bird room and the deck. Our first visitor was this male Ruby-Throated Hummingbird.  Like all hummingbirds he was quite busy.  So far this is the best photo I've been able to get.  His gorget appears black in this photo because the sun's rays were obscured by the mature White Oak trees on the south side of the deck. 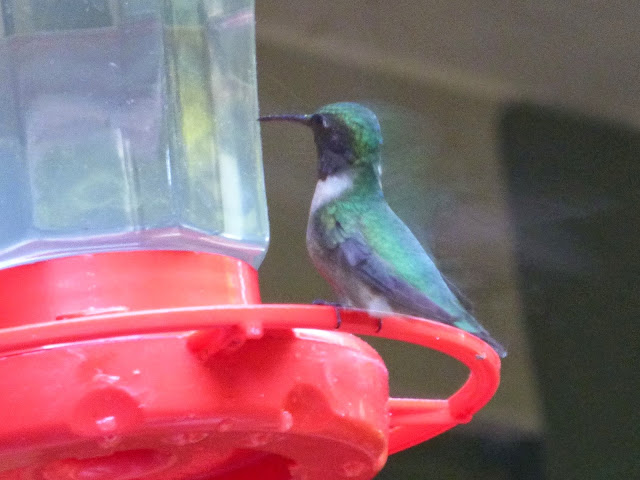 This male Eastern Bluebird was checking the terracotta saucer for live mealworms. His four young nestlings are just five days from fledging and he is as active as his mate in feeding them. 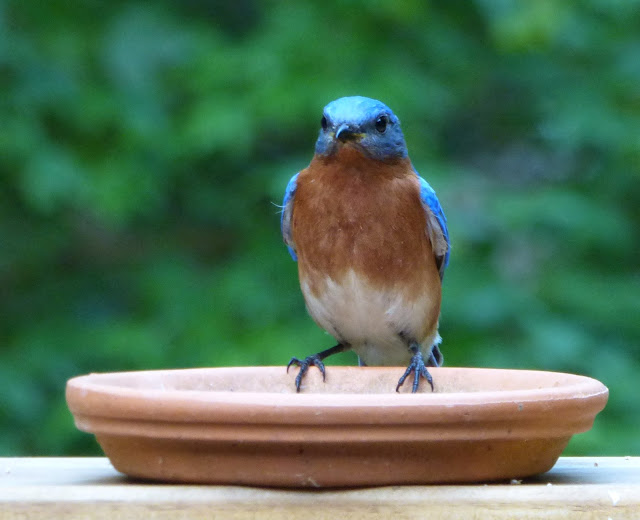 Back inside the bird room, I left the windows open again with a plastic tub of live mealworms on the table nearest one of the windows.  It wasn't long before the female of this pair showed up. She gave me a cautionary glance as I sat quietly with the camera on the other side of the room. 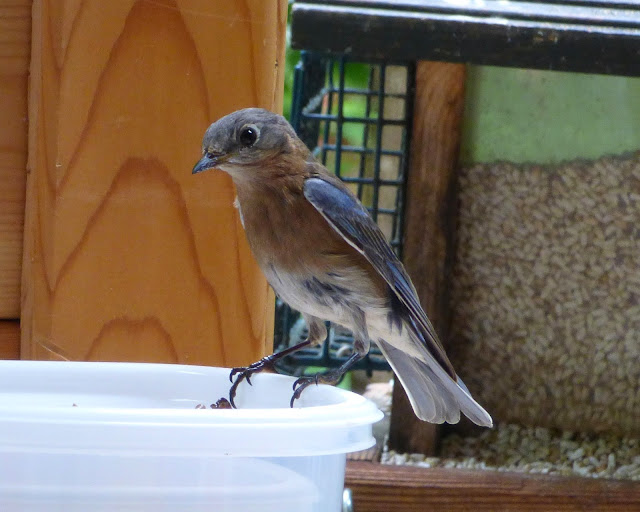 She gave a few quick wing beats to balance herself as she picked out the one she wanted.  I just love the soft beauty of these female Bluebirds. 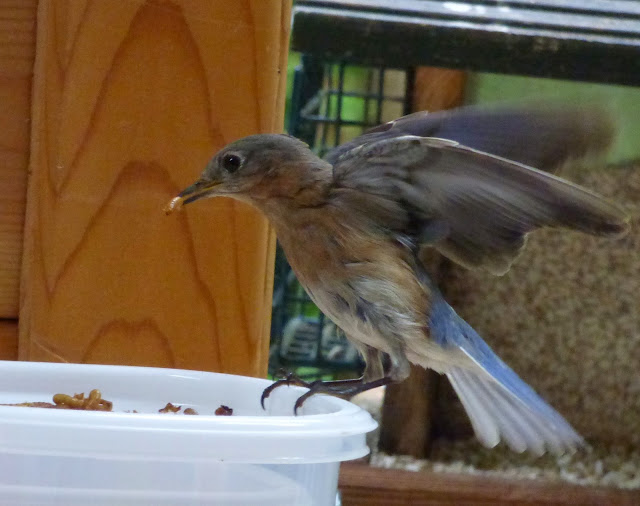 She secured the mealworm before flying back out of the window to the nest box that holds her four nestlings. 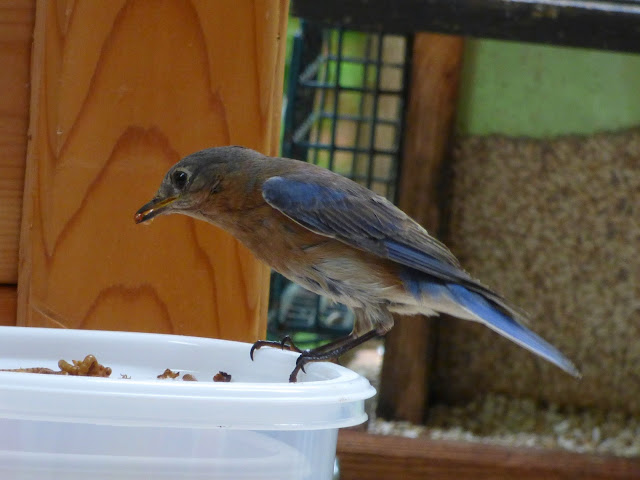 One of the bravest birds is the Carolina Wren.  For such a small bird they have a huge voice.  They creep and skulk around, often close to the ground before darting inside.   The wren's tail is characteristically held in a jaunty position and is rusty brown and marked with dark brown bars.  Their throats and bellies are buff in color and they have pink feet. 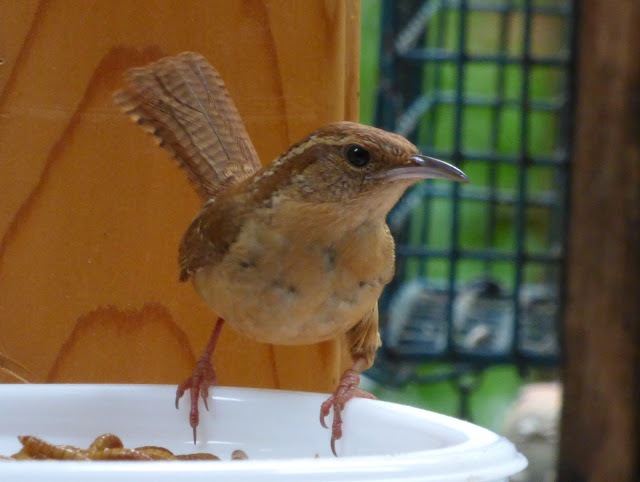 Two other characteristics of Carolina Wrens are the long white stripe over the eye and the longish, slightly downward curving beak.  I have been wondering where this bird might have nested.  The pair usually exits the window and then dives down under the deck to some remote location.  I had been looking around to see if I could find their nest, but was very surprised this week when I found a Carolina Wren nest in the bottom of a large Rubbermaid trashcan in the corner of the Moth Pit.  I could see four eggs in the nest around 6 pm that evening.  I returned after dark and peeked over the edge of the trashcan to see just the beak of the mother bird protruding form the nest's opening.  Two mornings later when she was away from the nest, I counted five eggs.  I have a new nest to monitor! 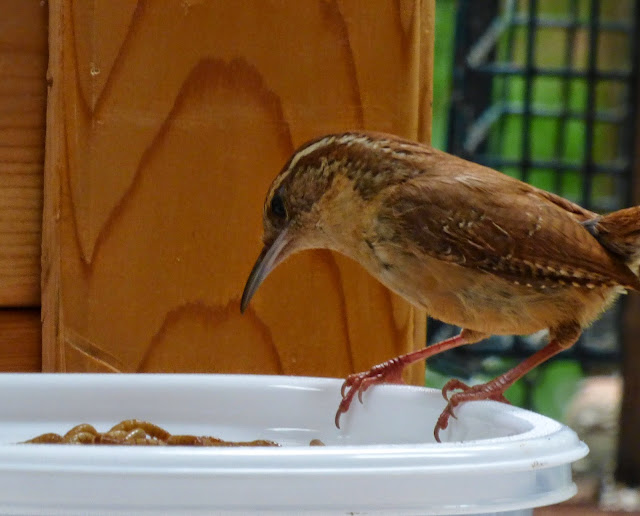 At least one Carolina Chickadee visited the indoor mealworm feeder.  These little birds are also brave around humans.  They have a soft gray back, a whitish belly and cheeks, and a black cap and throat patch.  We had a nest of chickadees in the yard last year, but this chickadee seems to fly into a neighbor's yard with its mealworms.  At the lab there are currently three active chickadee nests. 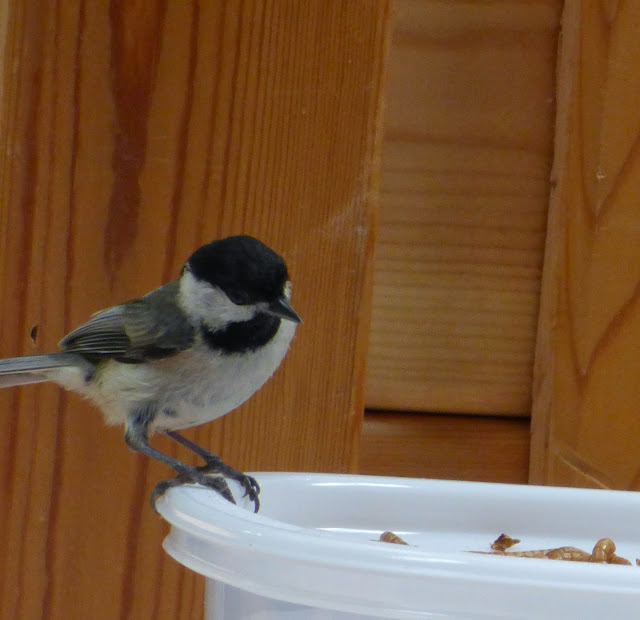 In this photo you can see how small the chickadee is using the mealworm for comparison.  They are probably two-thirds the size of the bluebirds. 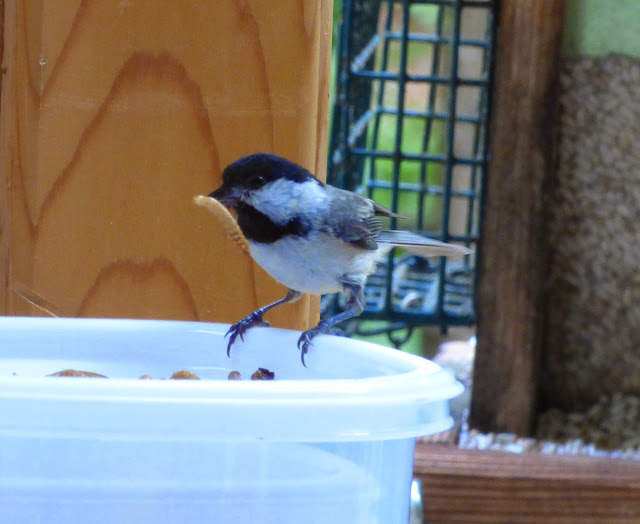 The final visitor for the morning was this Tufted Titmouse.  This relative of the little chickadees has a soft gray back and head with a crest  that it sometimes lays close to its head.  Its undersides are whitish with a touch of orange under its wings. 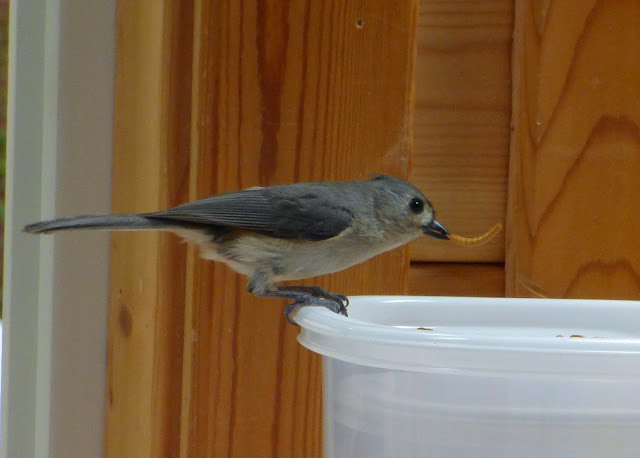 Last May we had a nest of titmice that failed about a week after the babies hatched. Something apparently happened to the mother bird.  This year there is a nest of six babies that are now well feathered.  I watched today as both parent birds made frequent trips to the nest with food. 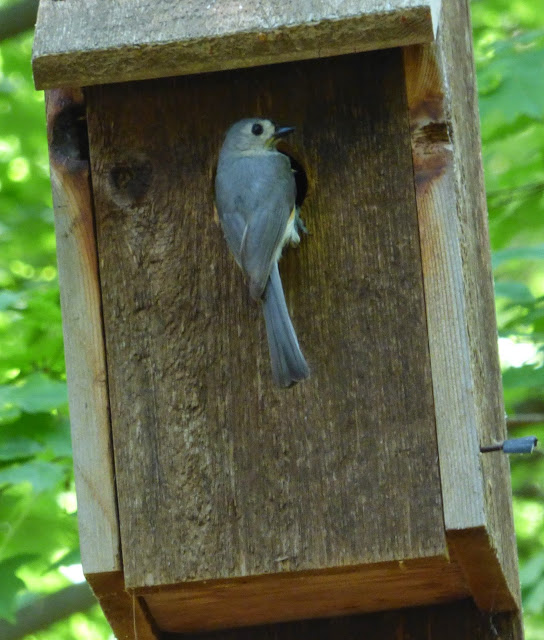 Posted by From Bluebirds to Turtles at 10:51 PM