Spring is in the air with bluebirds, chickadees, and nuthatches incubating their first nests of the season.  But for me, nature's bounty extends beyond the birds to six-legged creatures.

On April 20th I came across this fabulous metallic green Six-Spotted Tiger Beetle ambling over and around some dead vegetation that was strewn across large granite stones at the mouth of a retention pond that captures storm water run-off from the lab's large parking area.  Each shell-like outer wing often has three (but as many as five) white spots for a total of six (but as many as ten). This insect mostly ran along the rocks but occasionally took short low flights from spot to spot.  These guys are voracious hunters of other insects and have a magnificent set of jaws.


(link to bugguide.net photo of jaws) 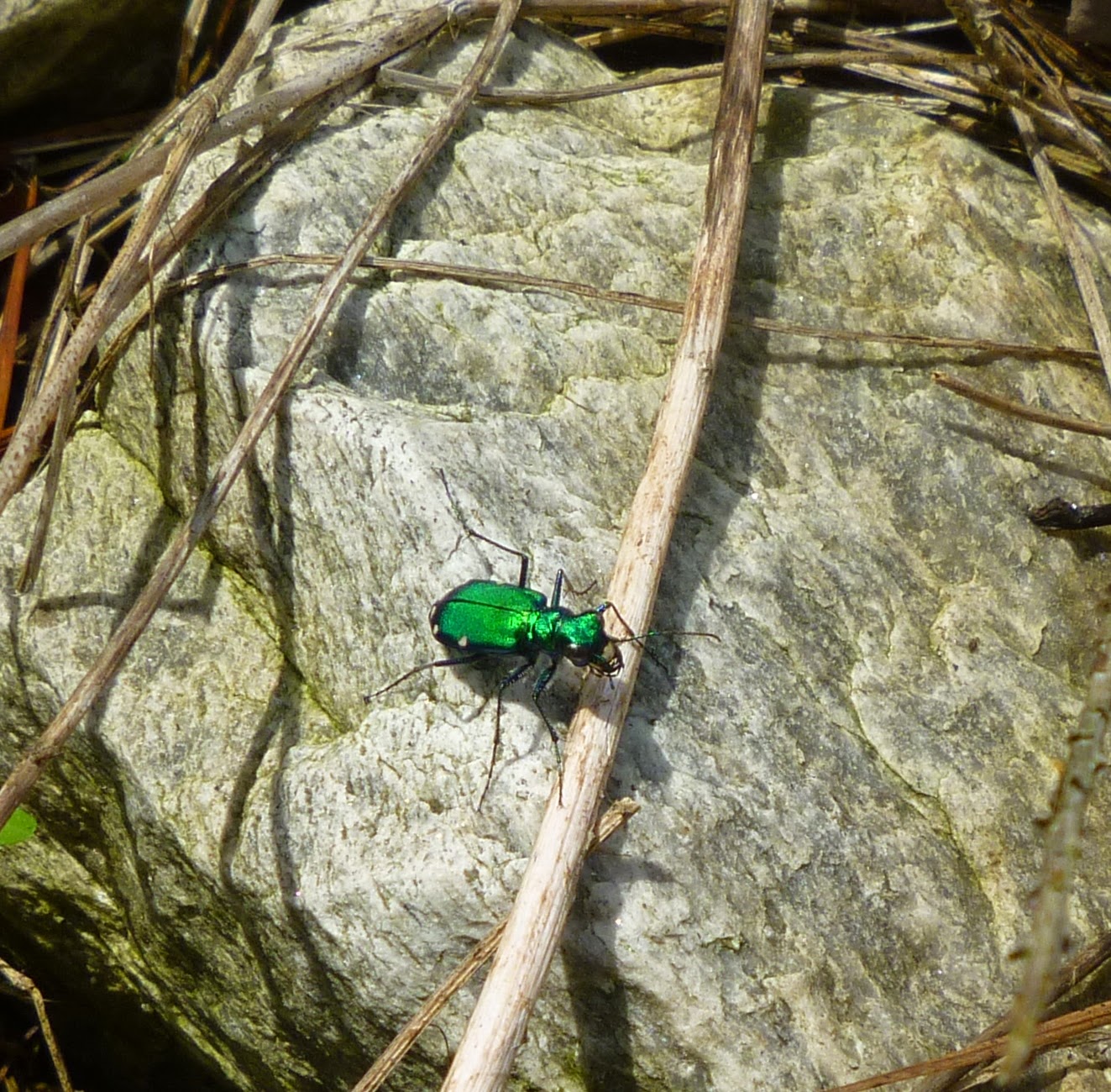 A couple weeks later I found another Six-spotted Tiger Beetle on a cloudier day, so its appearance is not quite as iridescent as the previous one.  This individual has an additional small pair of white spots toward the middle of it back. 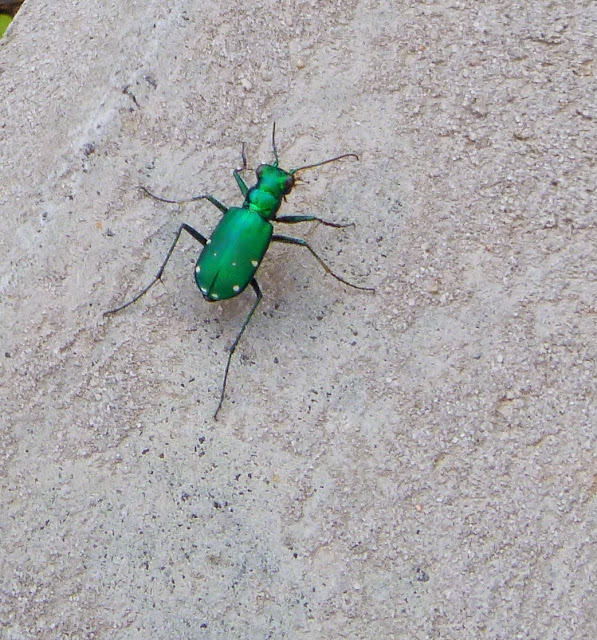 A few days earlier I found this pair of crane flies affixed to a second floor window along the connector between the two wings of the lab.  The mated female will lay her eggs in wet soil nearby or perhaps in water.  The larval crane flies often feed on decaying plant material, but the adults do not eat and live just long enough to mate and lay eggs. Crane flies are called by many other names like; mosquito eater (skeeter eater) or mosquito hawk (they do not eat mosquitoes), giant mosquito (they are not related to mosquitoes), gallinipper (though this name actually refers to a species of mosquito), and in Europe they are called "daddy long-legs" (the name we use for the spider-like harvest-men).  I read on Bugguide.net that there are more than 1500 species of crane fly in North America.  I have no clue what species this is! 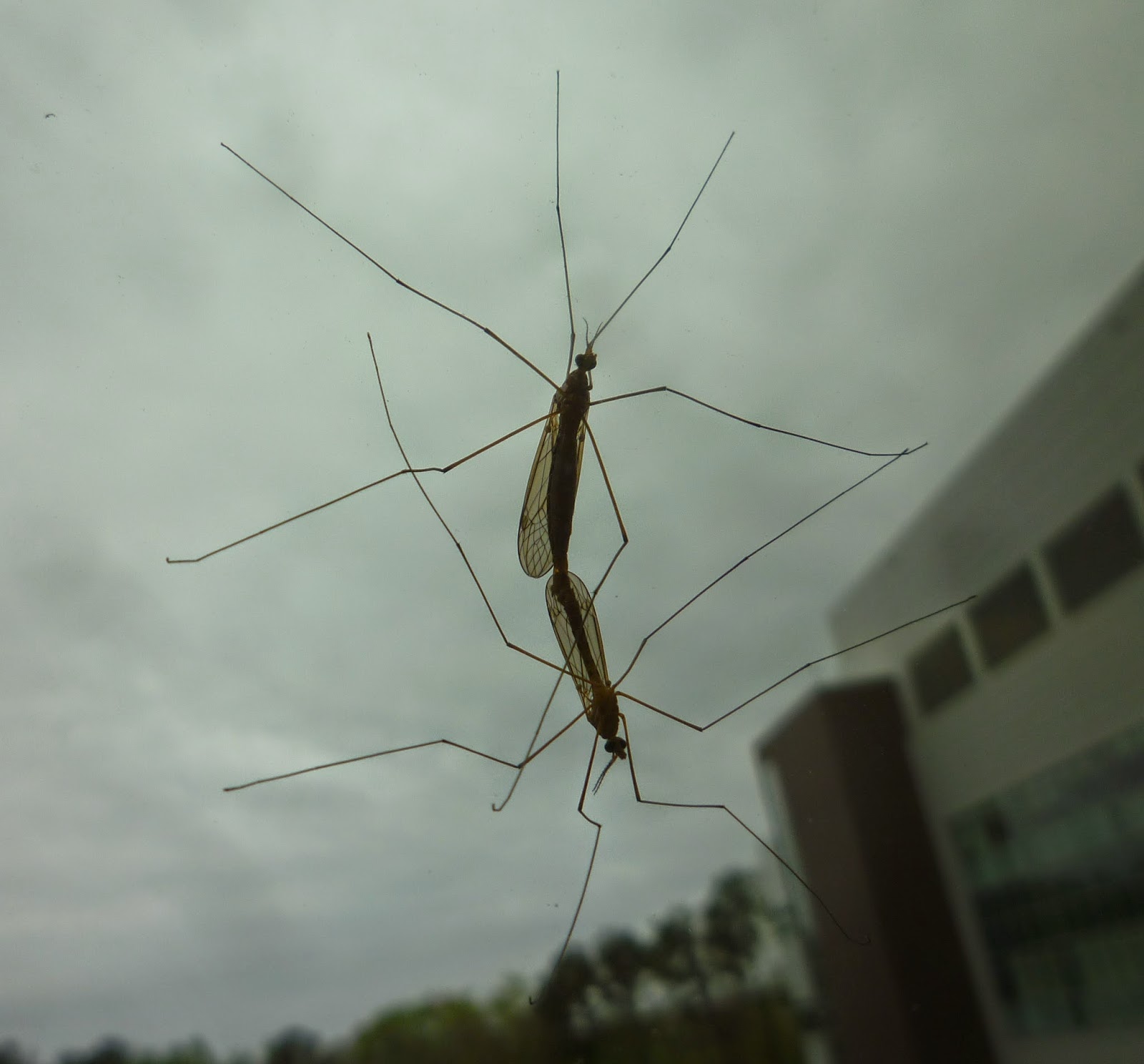 One feature that all Crane Fly species share with flies, gnats and mosquitoes is a pair of "halteres" that are located behind the fore-wings.  I read that these structures are a modified set of hind wings that act as a sort of gyroscope and aid in the crane fly's balance as it flies along with its long dangly legs hanging from its light weight body.  In this enlargement of the upper crane fly you can see the spherical "knobs" of the halteres just behind the third pair of legs. 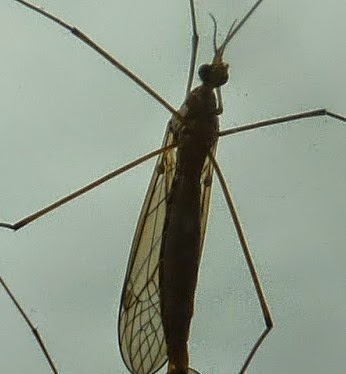 I learned from further reading that the development of halteres in flies, gnats,and mosquitoes, is controlled by a specific gene (the Ubx gene).  If this gene in these insects is "turned off" in an experimental laboratory setting, the young fly (or gnat or mosquito) will grow a fully developed second pair of wings instead of halteres.  This is an example of how one mutation in one specific gene can make a significant change in the anatomy of a species.

This is another species of crane fly that I found in March. The halteres are the "straight pin" shaped structures between the second and third pairs of legs. 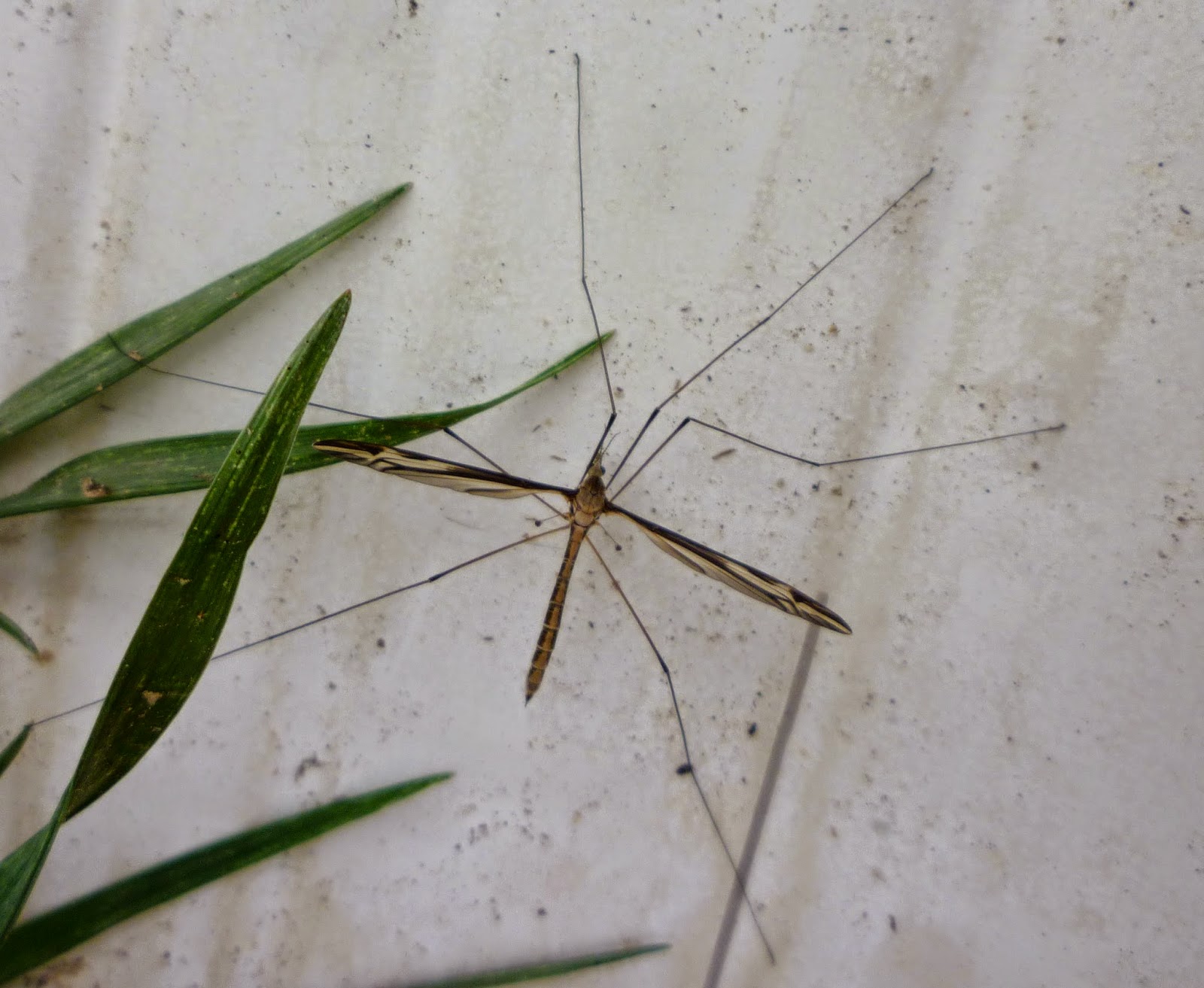 As I was checking the nest boxes at the lab one day in early May I noticed this green dragonfly hovering about.  It would land on vegetation and then move away from me as I got closer.  Since I did not have my long lens with me, this is the best photo I could capture.  It is a bit fuzzy from serious cropping.  From studying Bugguide.net this appears to be an Eastern Pondhawk.  It is either a female or more likely a young male based on the pair of white claspers at the tip of the tail.  I read that as a male pondhawk ages, he develops a waxy covering on the abdomen and eventually the thorax which causes his coloration to become a powdery blue.  This species of dragonflies is an aggressive hunter of other insects, not only as an aquatic larva at the bottom of ponds, but also as an adult that zooms around over ponds and habitat nearby. They are not harmful to humans. 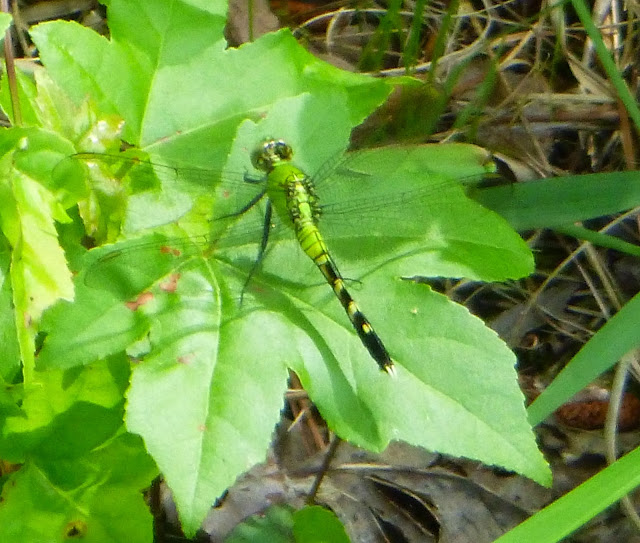 Wednesday morning May 13th I went to check on the Bluebirds nesting in our backyard.  On the side of the nest box I found this pair of orange and black moths.  It first I thought they might be beetles, but they had feathered antennae.  I have recently join the "Moths of the Eastern United States" Facebook group, so I posted my first moth ID check.  From looking at Bugguide.net I had guessed that these might be Black and Yellow Lichen Moths (Lycomorpha pholus).  Within a few minutes I had a response that gently suggested that these were Orange-Patched Smoky Moths.  A quick visit to Bugguide.net confirmed this identification.  I read more about this moth today and discovered two items of interest.  The larvae of this moth are leaf skeletonizers.  The caterpillars eat the material between the leaf veins which leaves a skeleton of the original leaf.  Instead of feeding on live leaves like many skeletonizers, this species appears to feed mostly on leaf litter, especially oak.  The other interesting point is that the adult insect is a color mimic of a toxic orange and black beetle.  In fact, this moth is also thought to be toxic as well, actually manufacturing its own cyanide compound to ward off creatures that would attempt to dine on it.

(link to info about Smoky Moths) 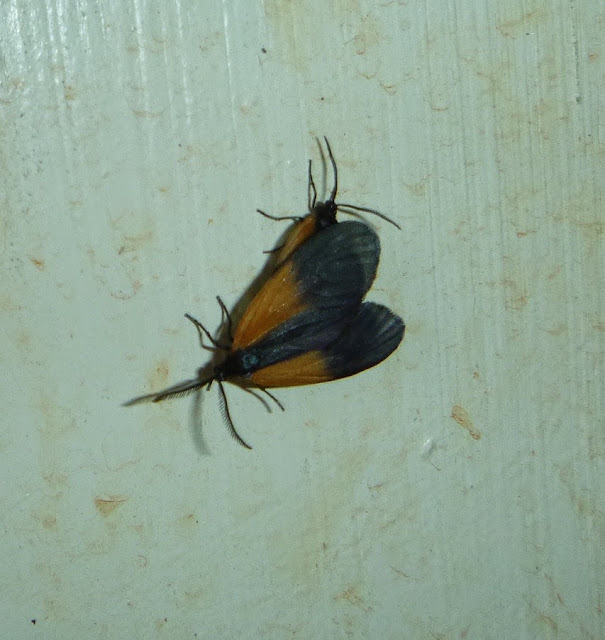 Later the same day as I returned to the lab's back door I came upon this beautiful fly on the concrete patio.  After consulting Bugguide.net, I learned that this is a Golden-Backed Snipe Fly.  I was able to identify this as a female fly from her thicker abdomen and the fact that her eyes do not touch each other as do the eyes of male flies.  This fly is thought to be predatory on other insects.  Though there are similar species that live in the western states of the US that bite humans, this species apparently does not. 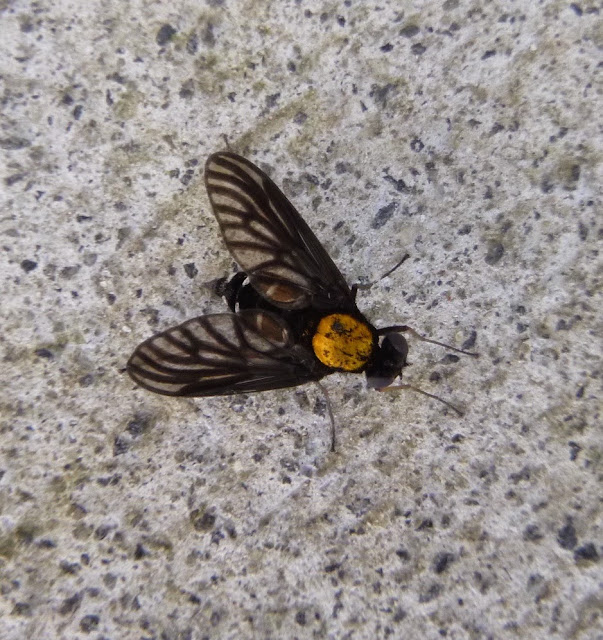 Posted by From Bluebirds to Turtles at 8:32 PM