The weather was quite pleasant on May 2nd, so I opened the windows to the "bird room".  This way I could photograph birds at the feeders without the distortion of the windows' glass. 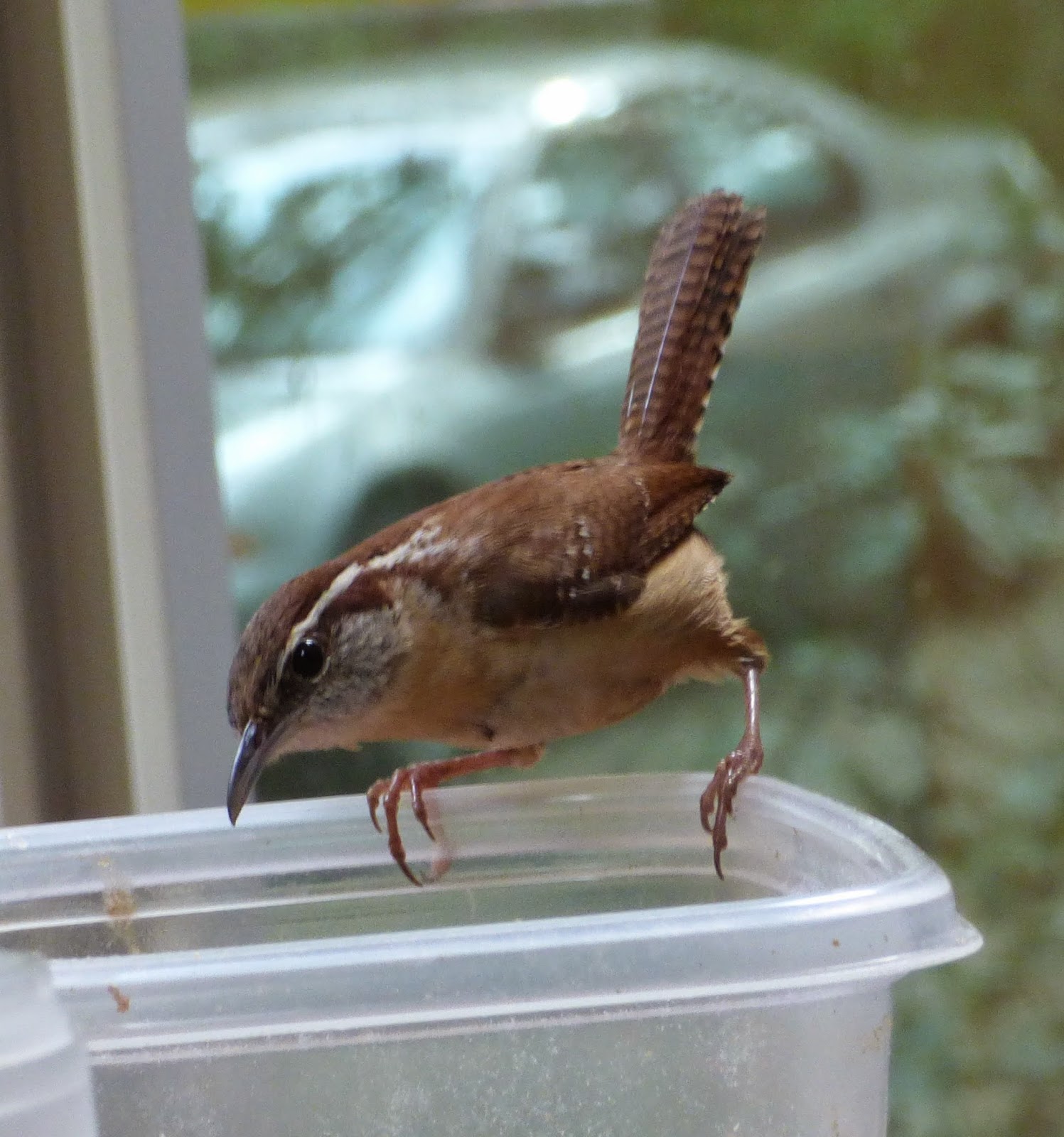 A little closer look is in order. 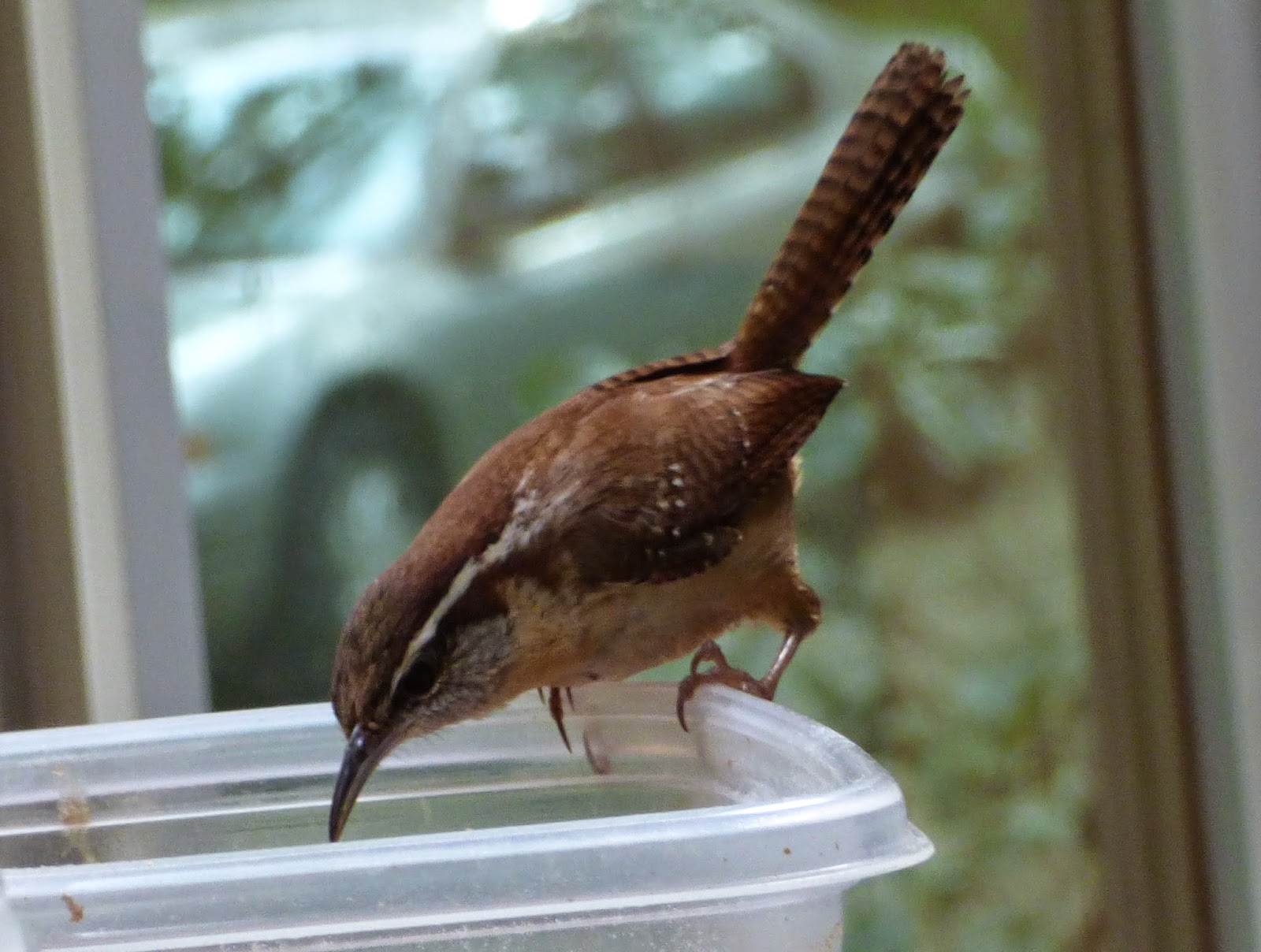 OK, the perfect mealworm is selected.  Or is that two? 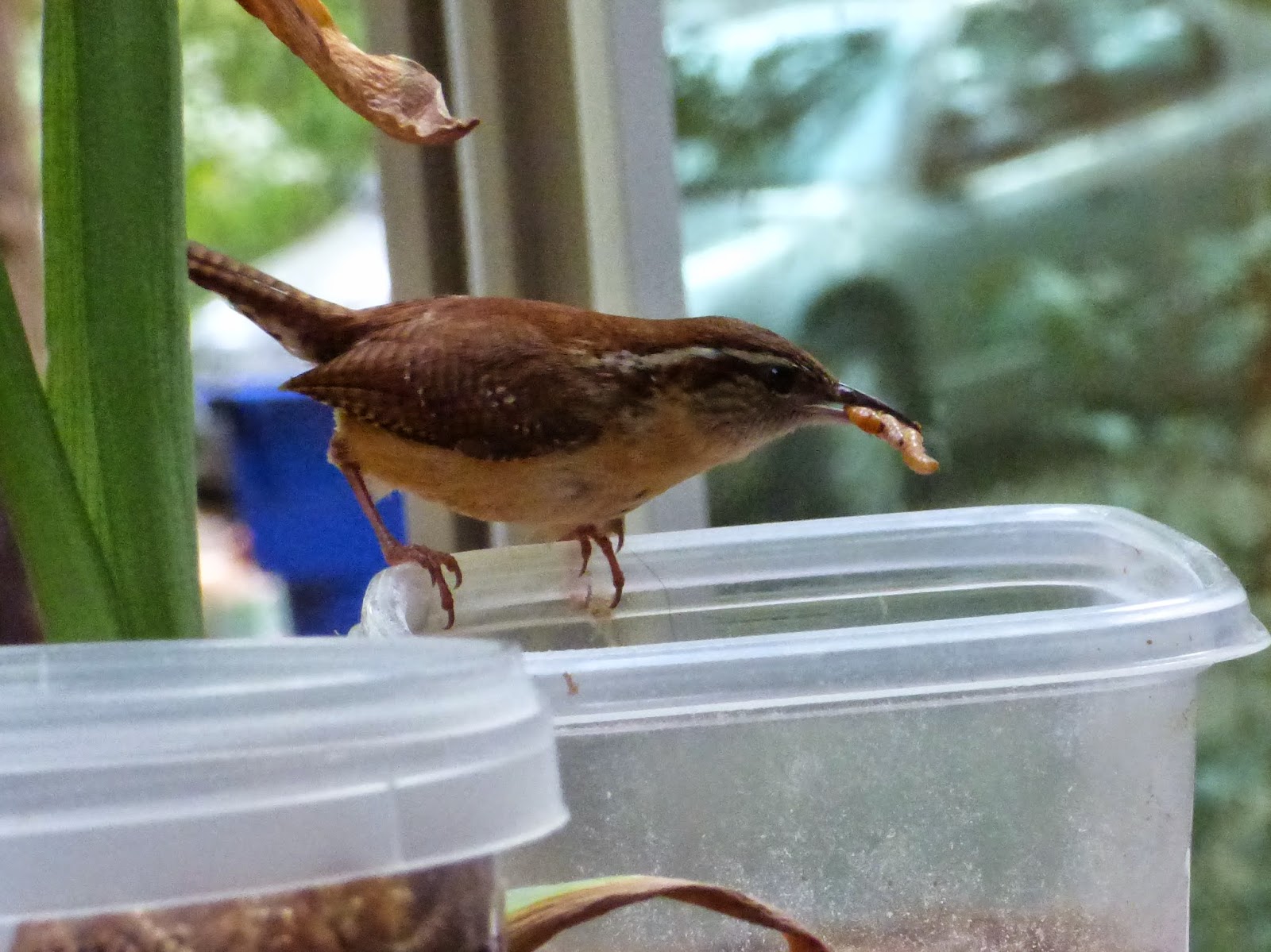 Now it's time to check out and head for the nest that the wrens must have nearby.  I have yet to locate it. 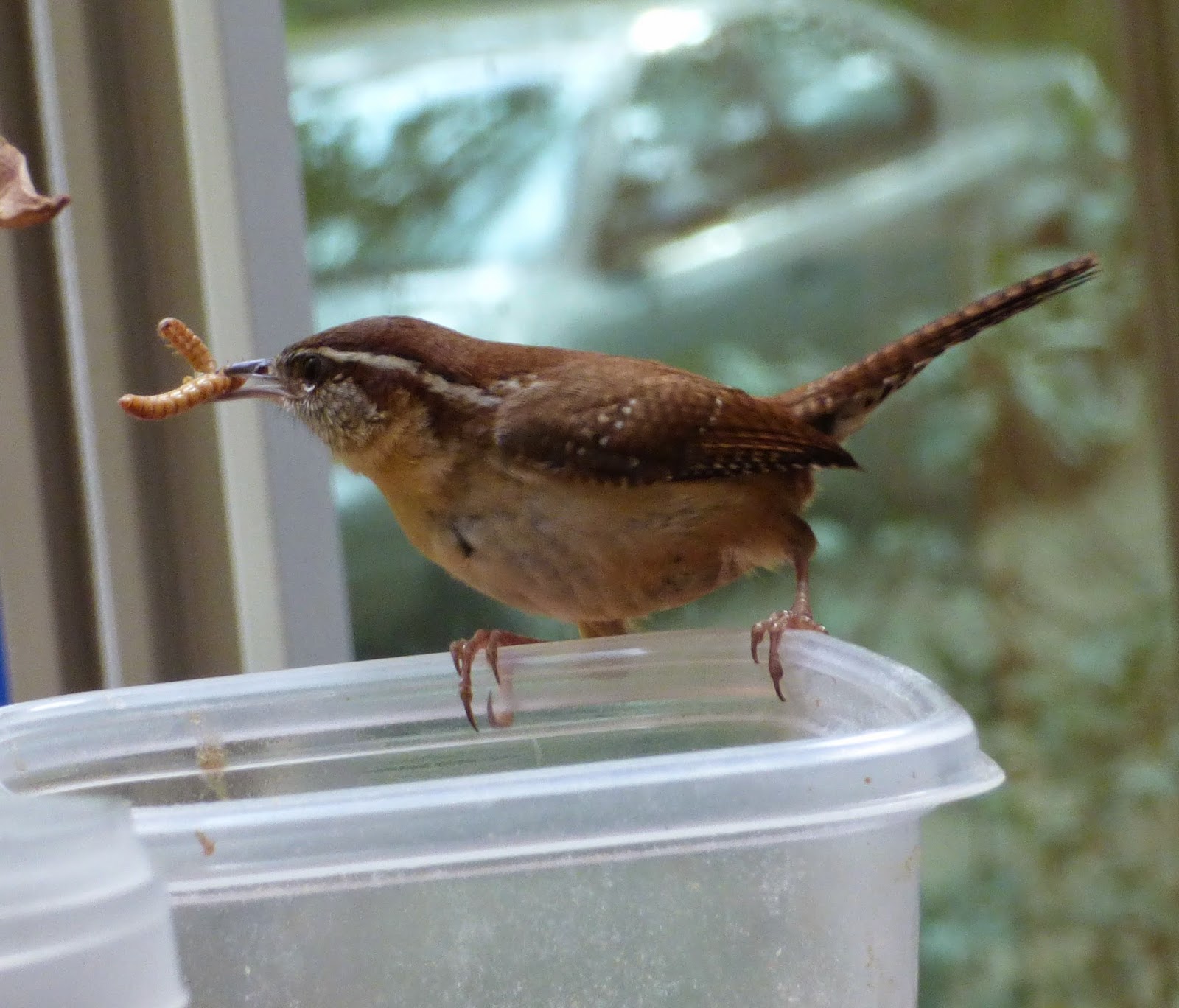 
Of course one of my favorite birds to watch is the Eastern Bluebird.  With two bluebird nests in the yard, each male is busy trying to keep the other bluebird pair away from the mealworms.  But eventually both pairs get their share.  It is interesting to watch these beautiful blue males allow wrens and titmice to feed on mealworms at will, but object when either of the bluebirds from the other pair approach. 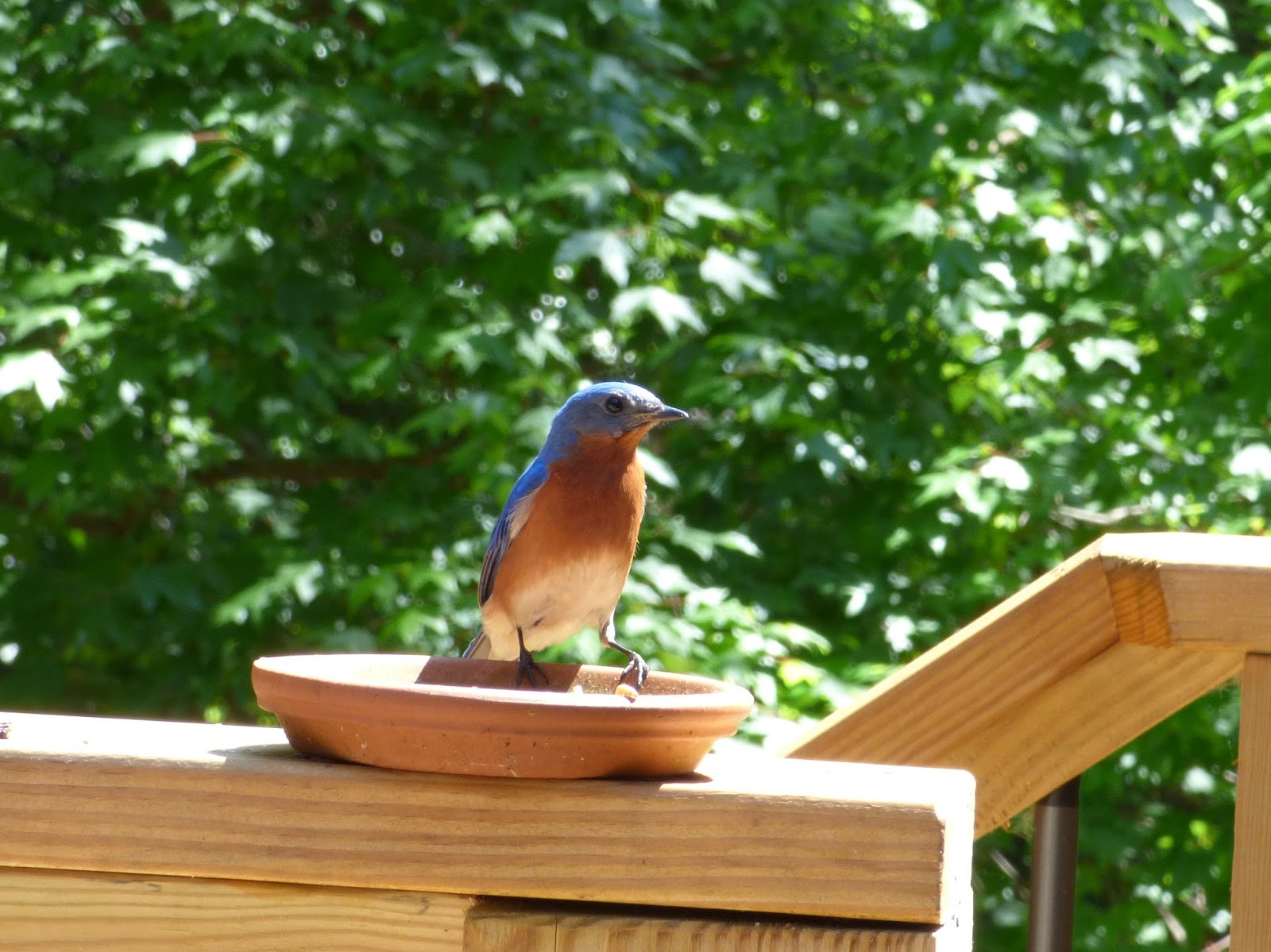 Wow, what a magnificent and stately bird.  Watch out, there go those sneaky mealworms heading over the edge of the flower pot saucer! 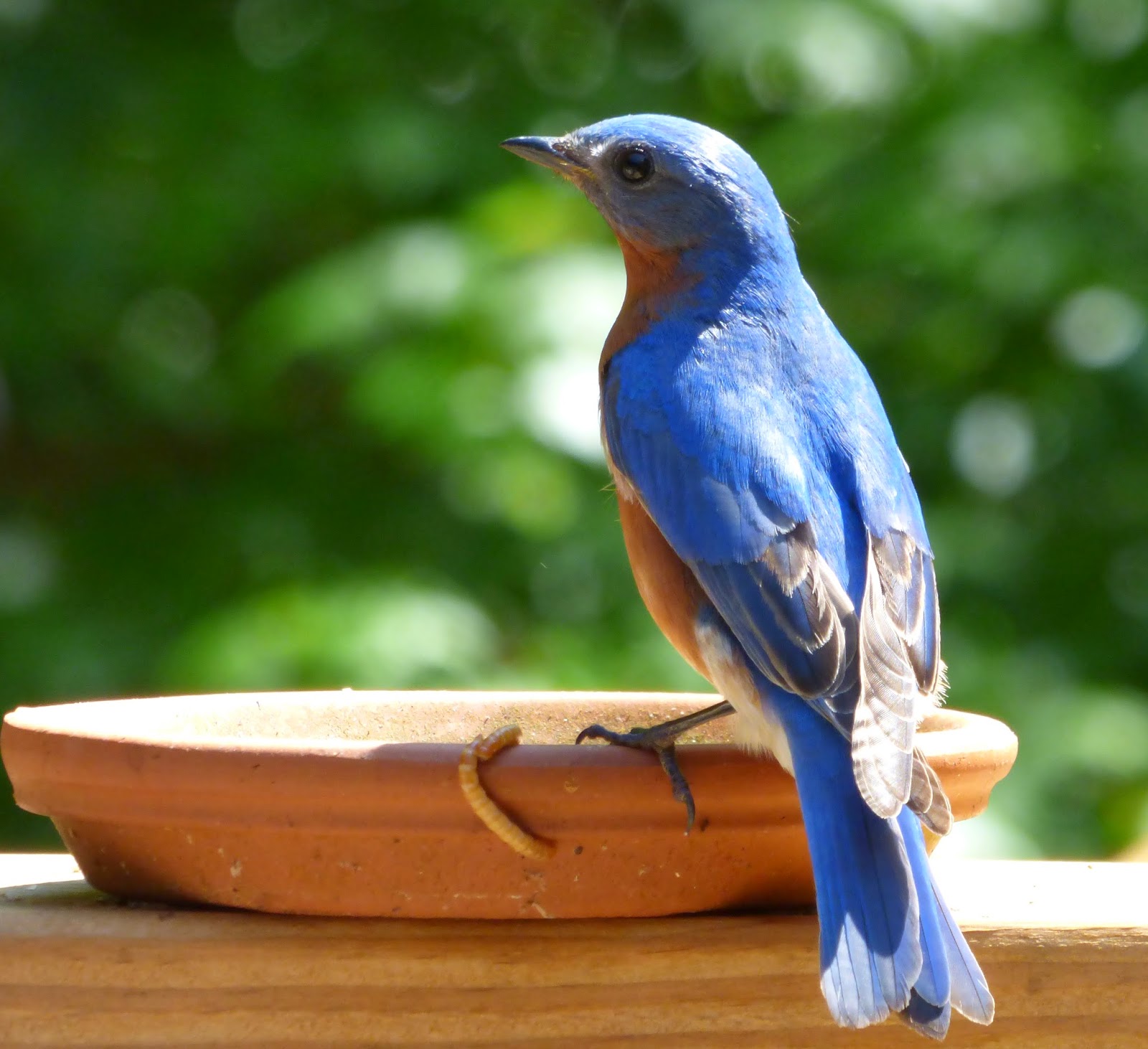 Here is the female Eastern Bluebird.  Right down the center of her tummy, you can make out a vertical slot where her brood patch is located.  This is a bare area of skin on her abdomen that she uses to keep her eggs warm during incubation and to keep her developing young snug during the first several days after hatching. 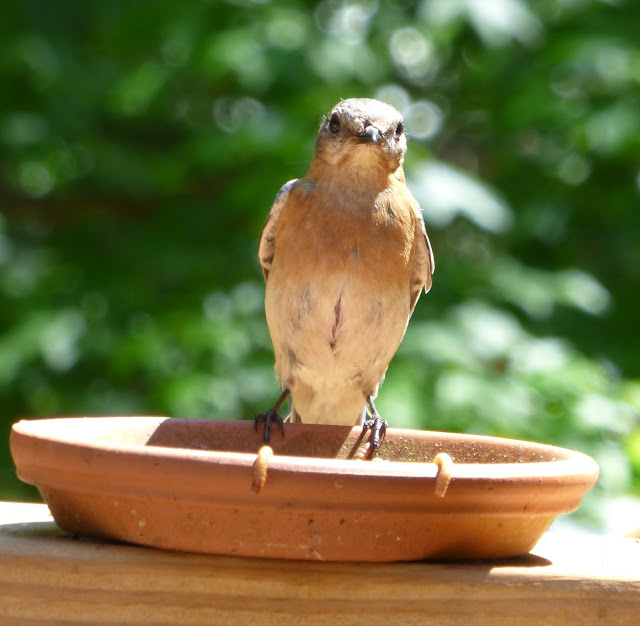 I refilled the suet feeder last week to supplement the adult insect-eating birds while they are hunting live insects for their babies.  The bluebirds are taking advantage of this additional supply of energy food. 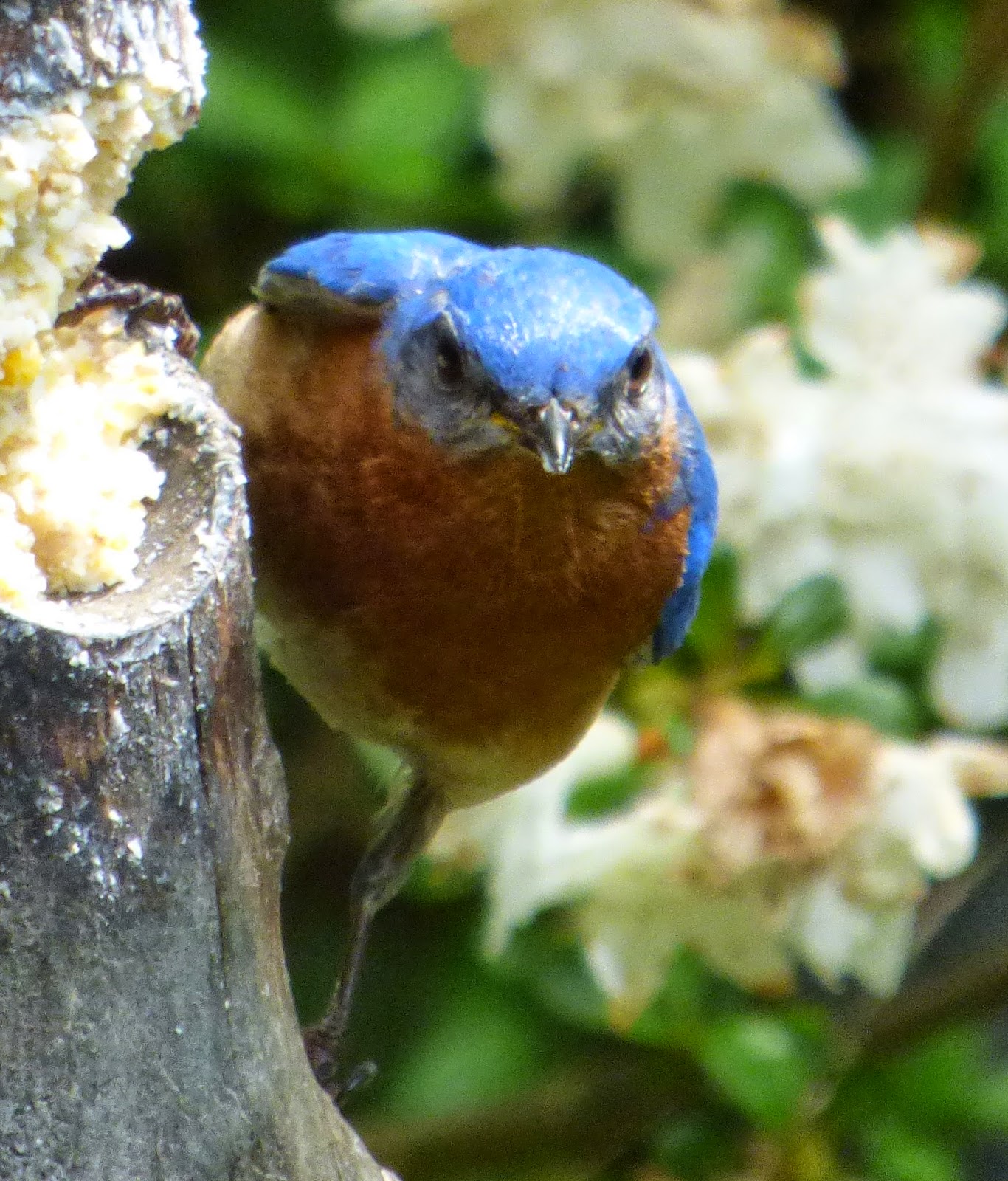 Male bluebirds are very attractive birds and their behaviors are enjoyable to watch. 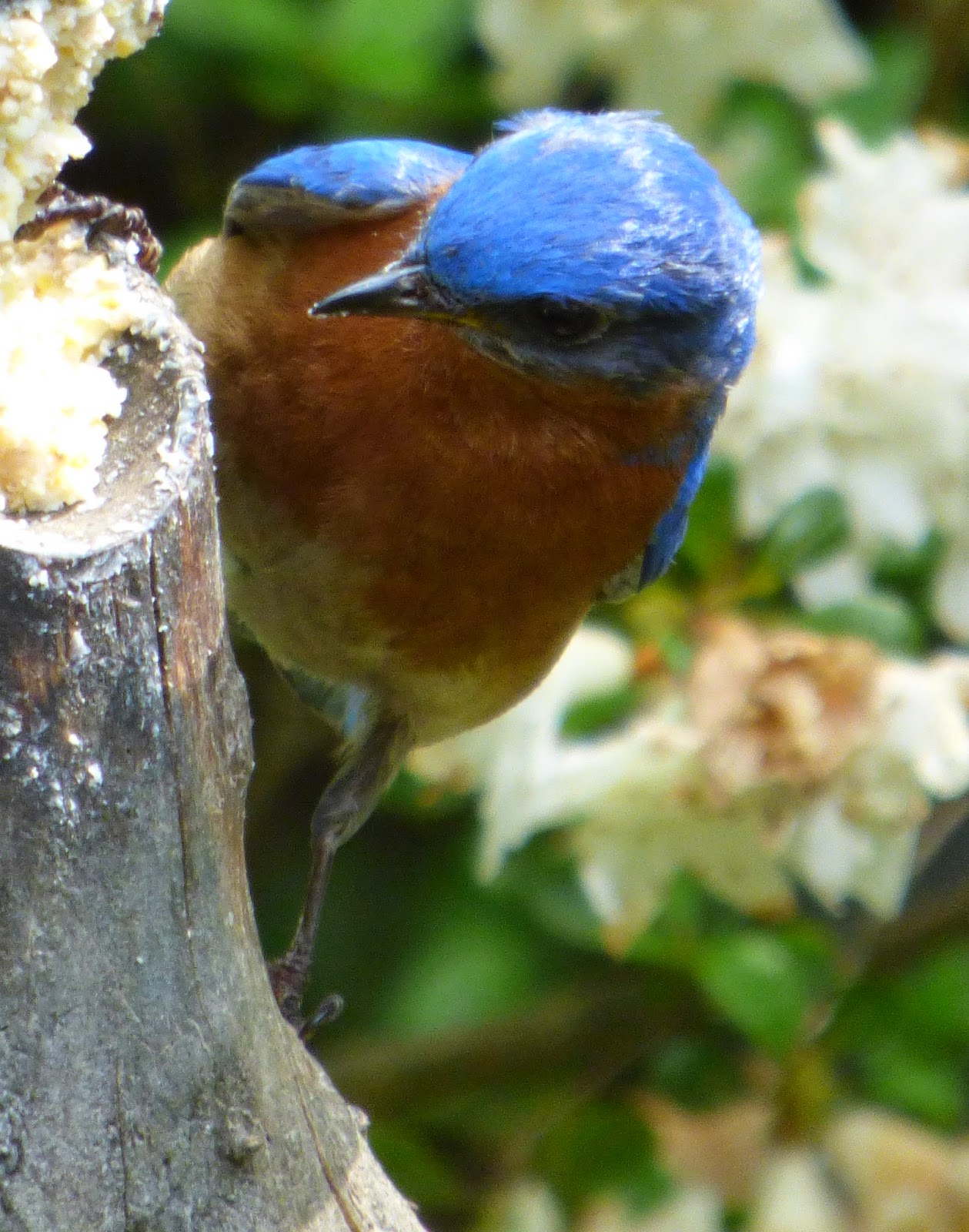 
This handsome Red-bellied Woodpecker visits the suet feeder occasionally.  He also spends plenty of time checking out the overlapping bark on trees in the area looking for insects and spiders. 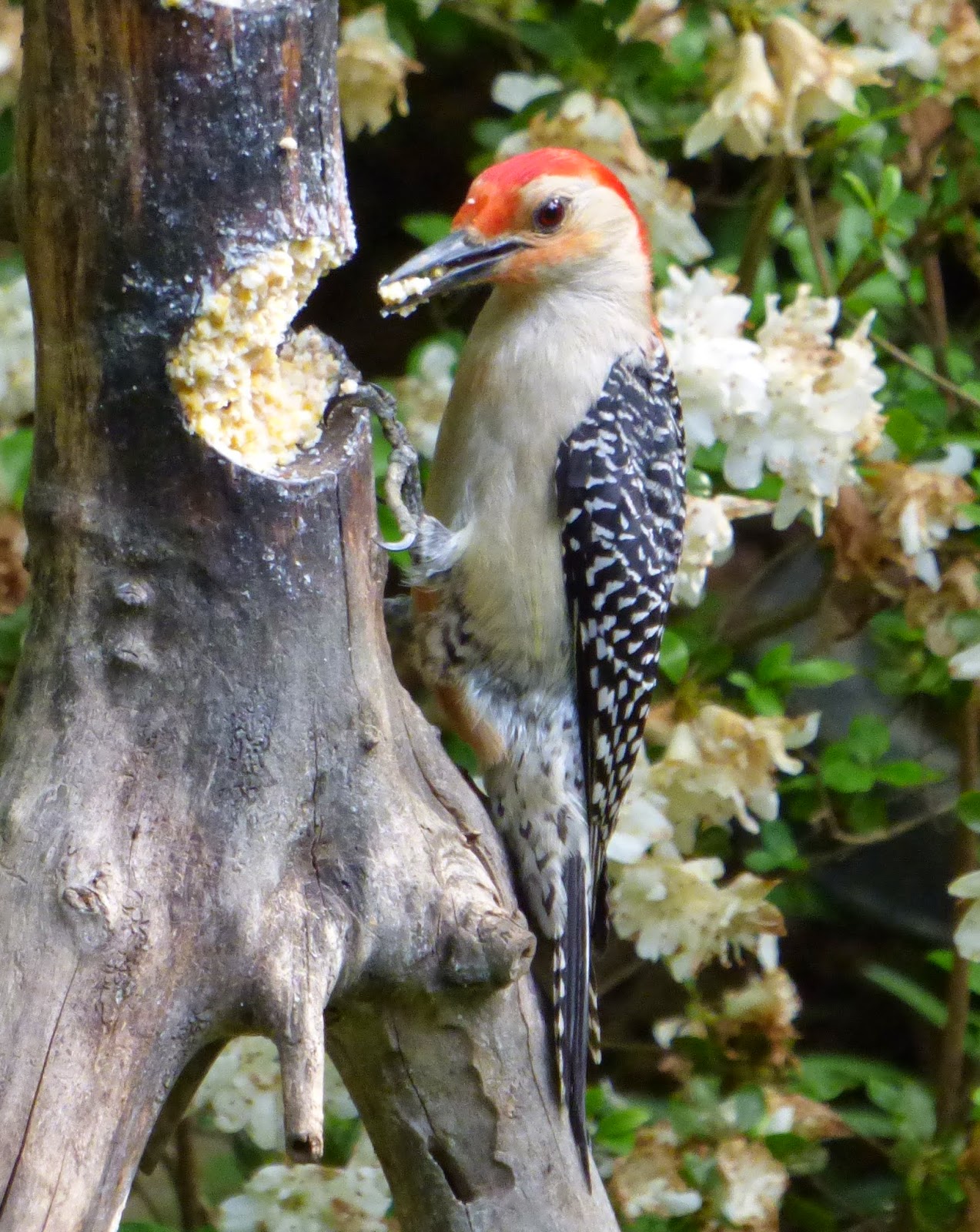 Now this is a mouthful of suet! 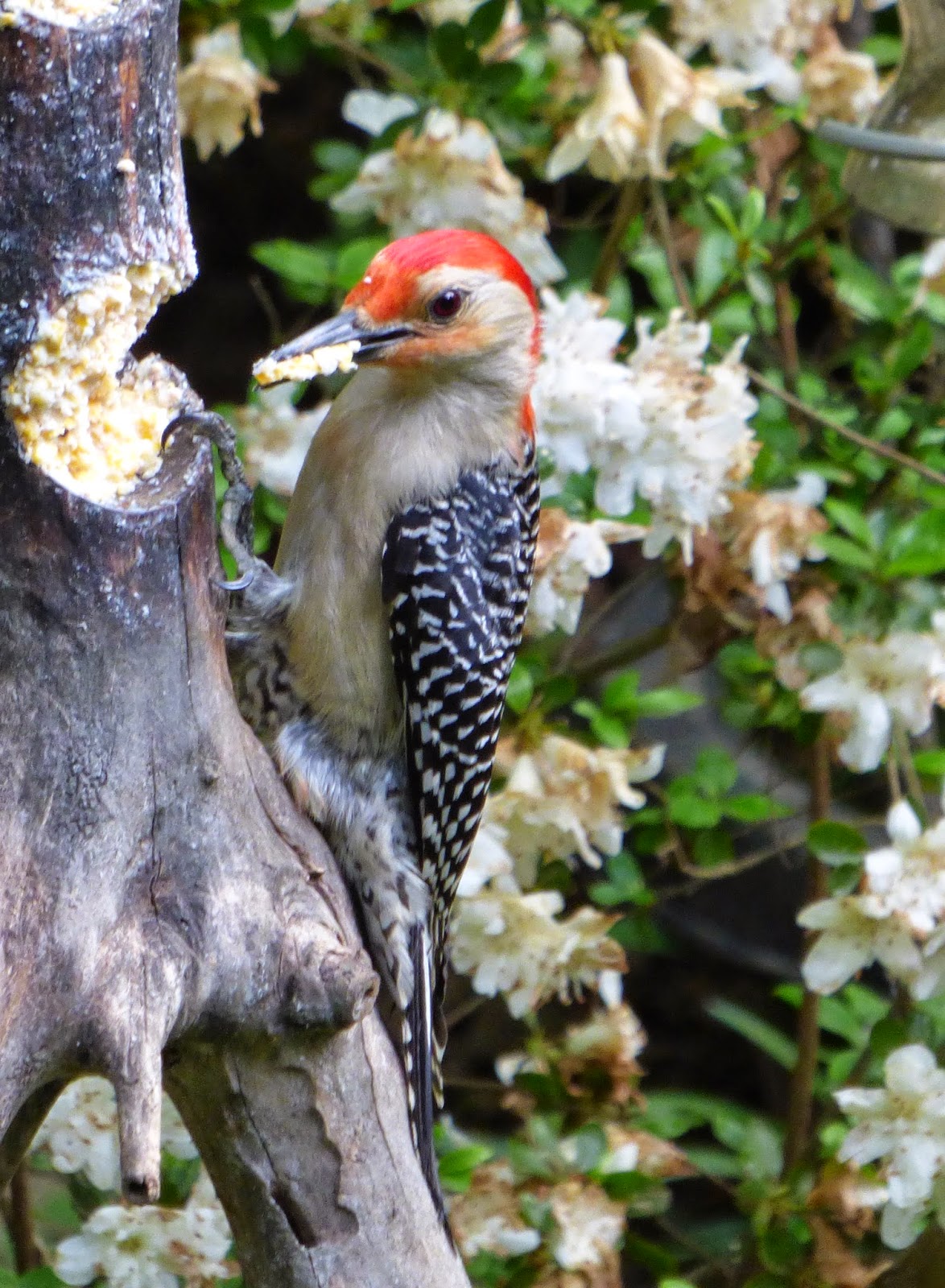 
This female Downy Woodpecker also visits the suet feeder. She is about the same size as the bluebirds. Woodpeckers have a toe arrangement that is different than most of the songbirds which have three toes pointing forward and one pointing backward.  The Downy has two toes pointed forward and two pointed to the back which helps them in maneuvering around on the bark of trees. 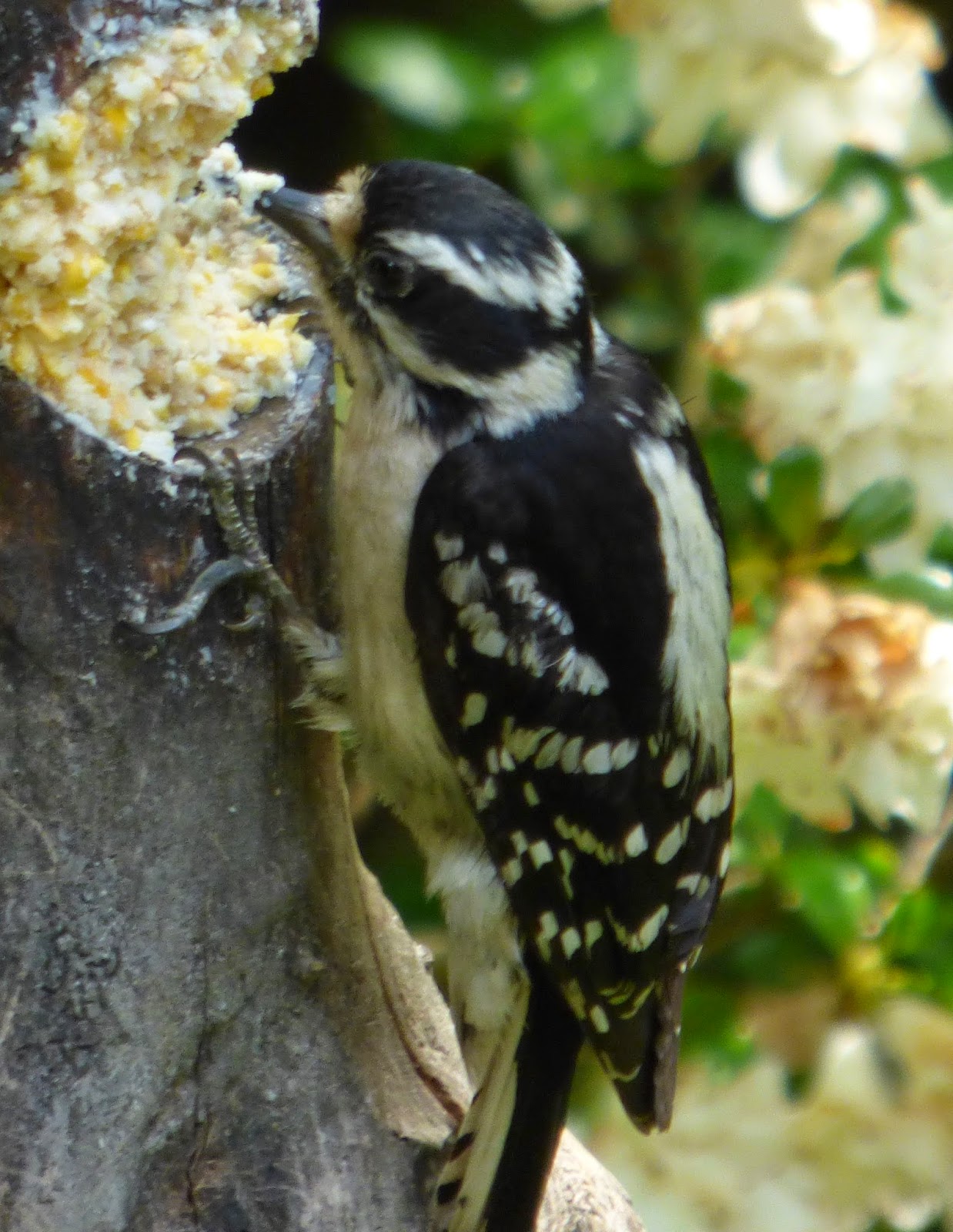 
The Gray Catbird migrates south in winter while its kin, the Northern Mockingbird and the Brown Thrasher, remain here year round.  These three species are "mimids" that mimic the songs of other birds.  Typically mockingbirds repeat other birds' songs in at least a triplet, while brown thrashers sing doublets of each call before moving on to the next.  Catbirds usually repeat each call just once which gives their song a very rambling nature.  They also have a "mew" call that sounds much like a kitten's.  Gray Catbirds are a uniform slate gray with a black skull cap. 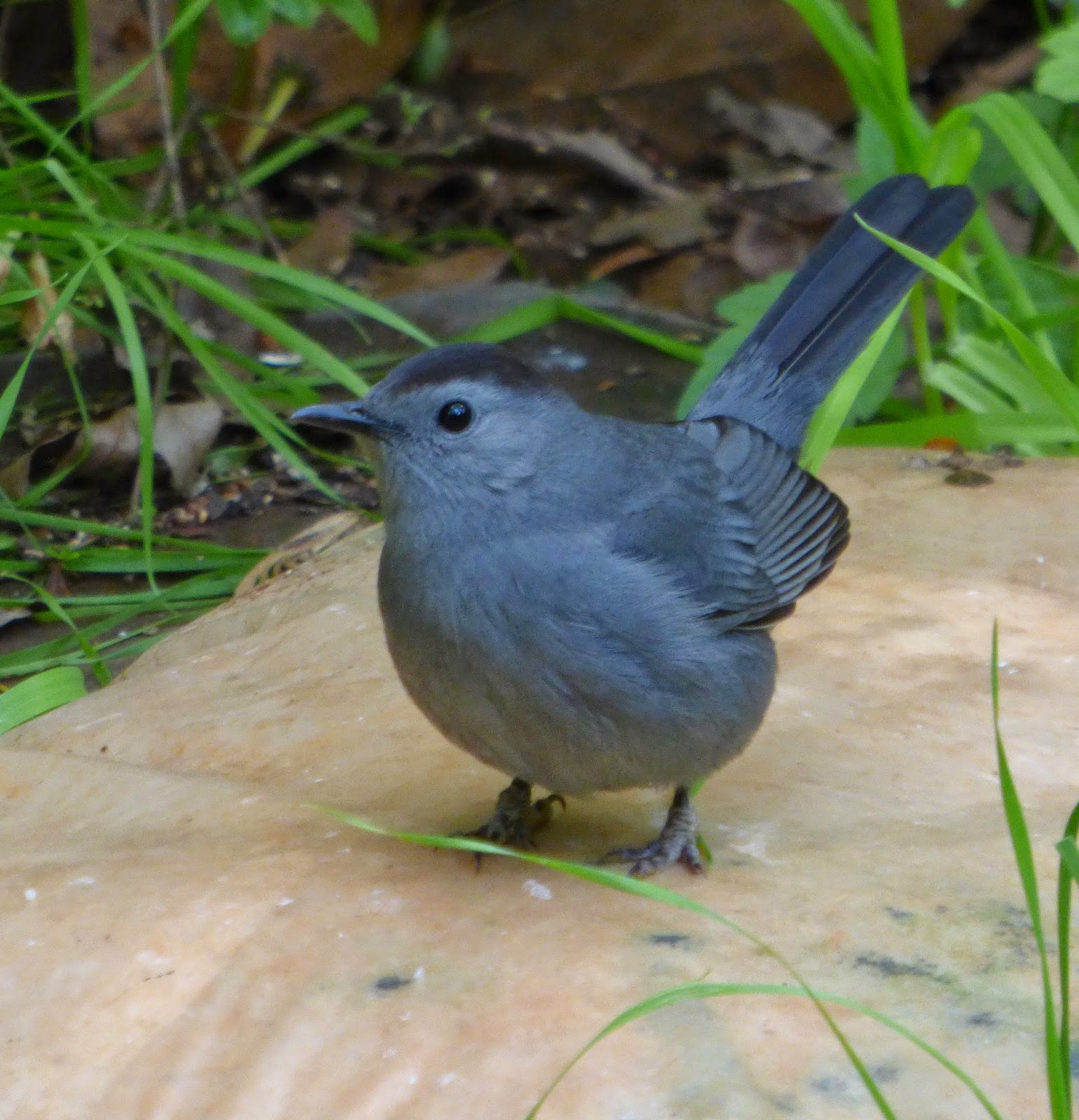 It is nice to see the shy catbirds return in the spring.  There have been a pair visiting the suet feeder and also picking up morsels from under the feeders.  I suspect they may have a nest in some thicket nearby, but I have yet to locate it.  The Gray Catbird has a rusty patch beneath its tail that you can see here. 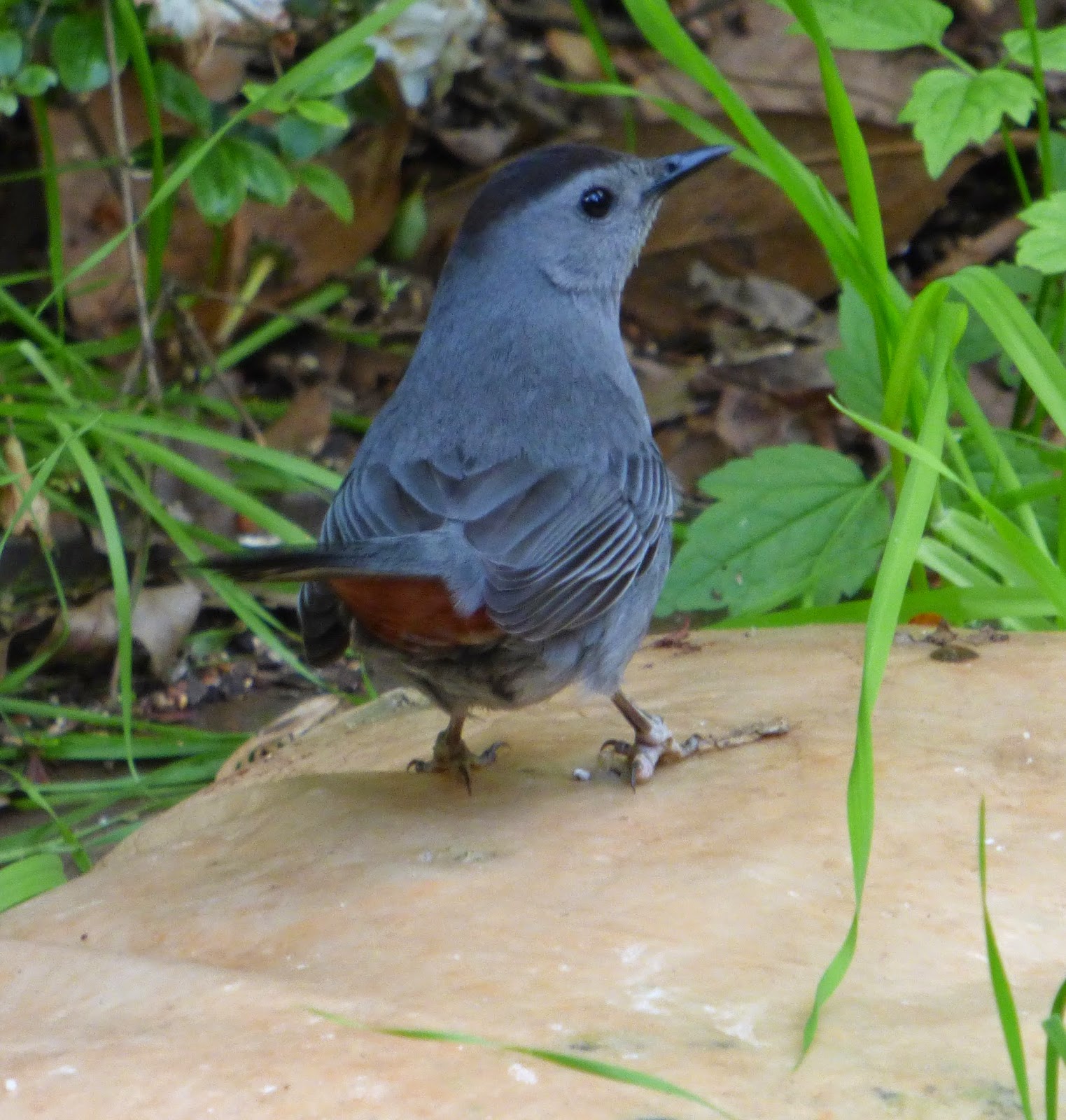 
The acrobatic White-breasted Nuthatch is a common visitor to seed and suet feeders year round.   They have an impressive beak made for probing under the bark of trees searching for insects, but can also hammer the dickens out of sunflower seed that they often stash in nooks and crannies of trees for later retrieval. 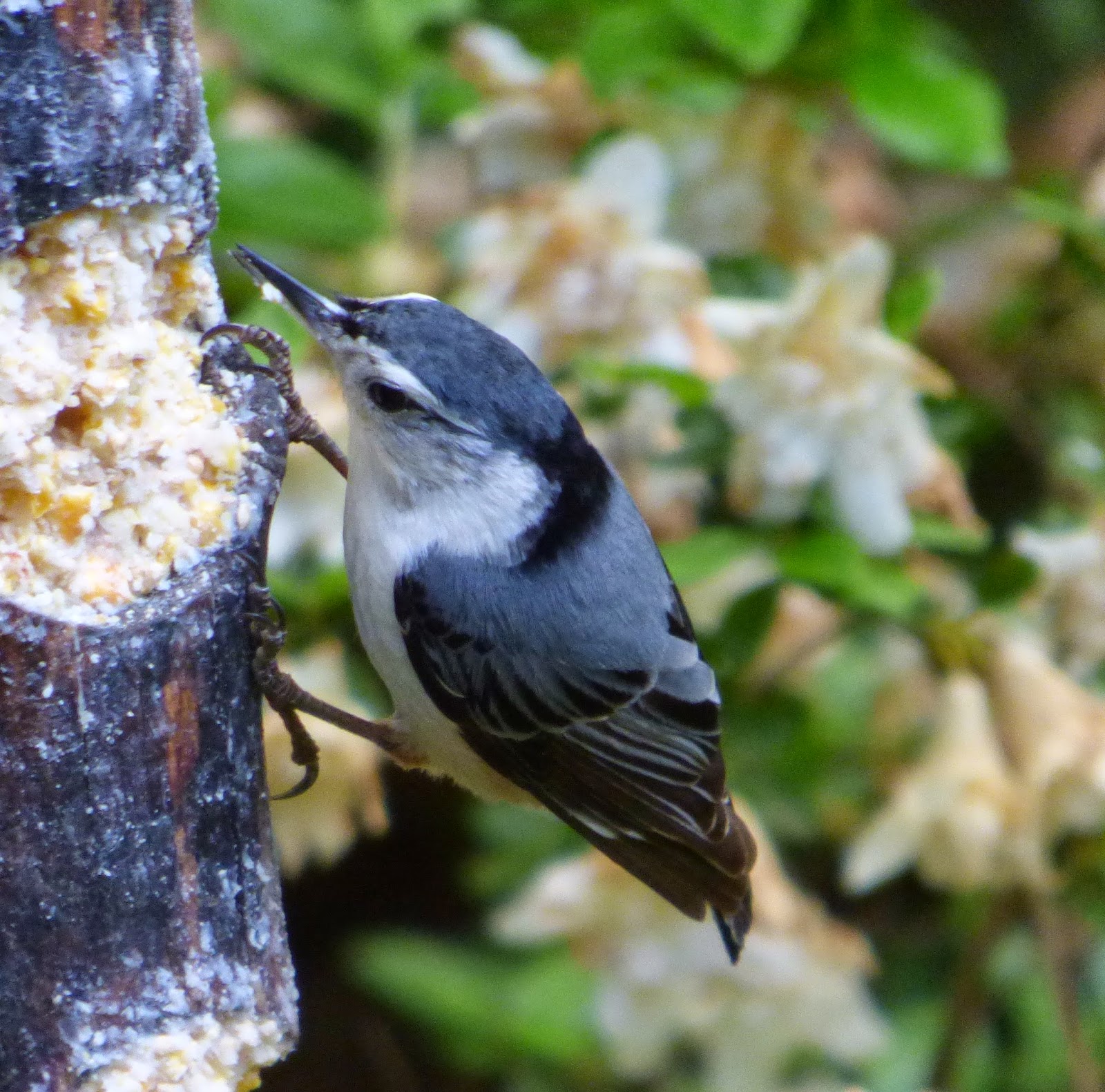 This is a typical pose of the White-breasted Nuthatch, with its head pointed down.  I love to hear their lively "yank, yank, yank, yank" nasally call. 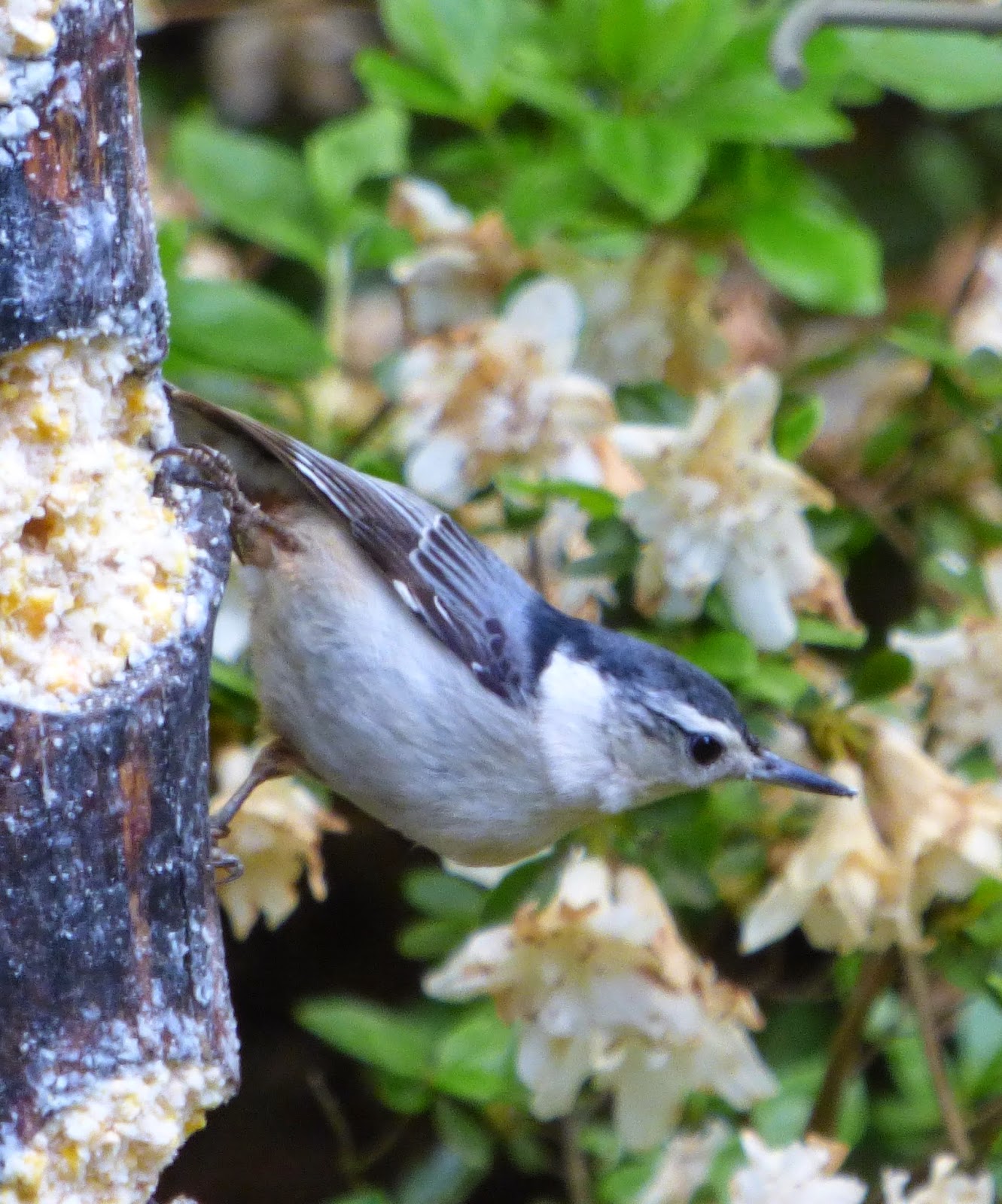 
This dazzling male Yellow-rumped Warbler has been coming to the suet feeder recently.  He has transformed quite a bit since the winter when there were ten or more at one time frequenting the feeders. 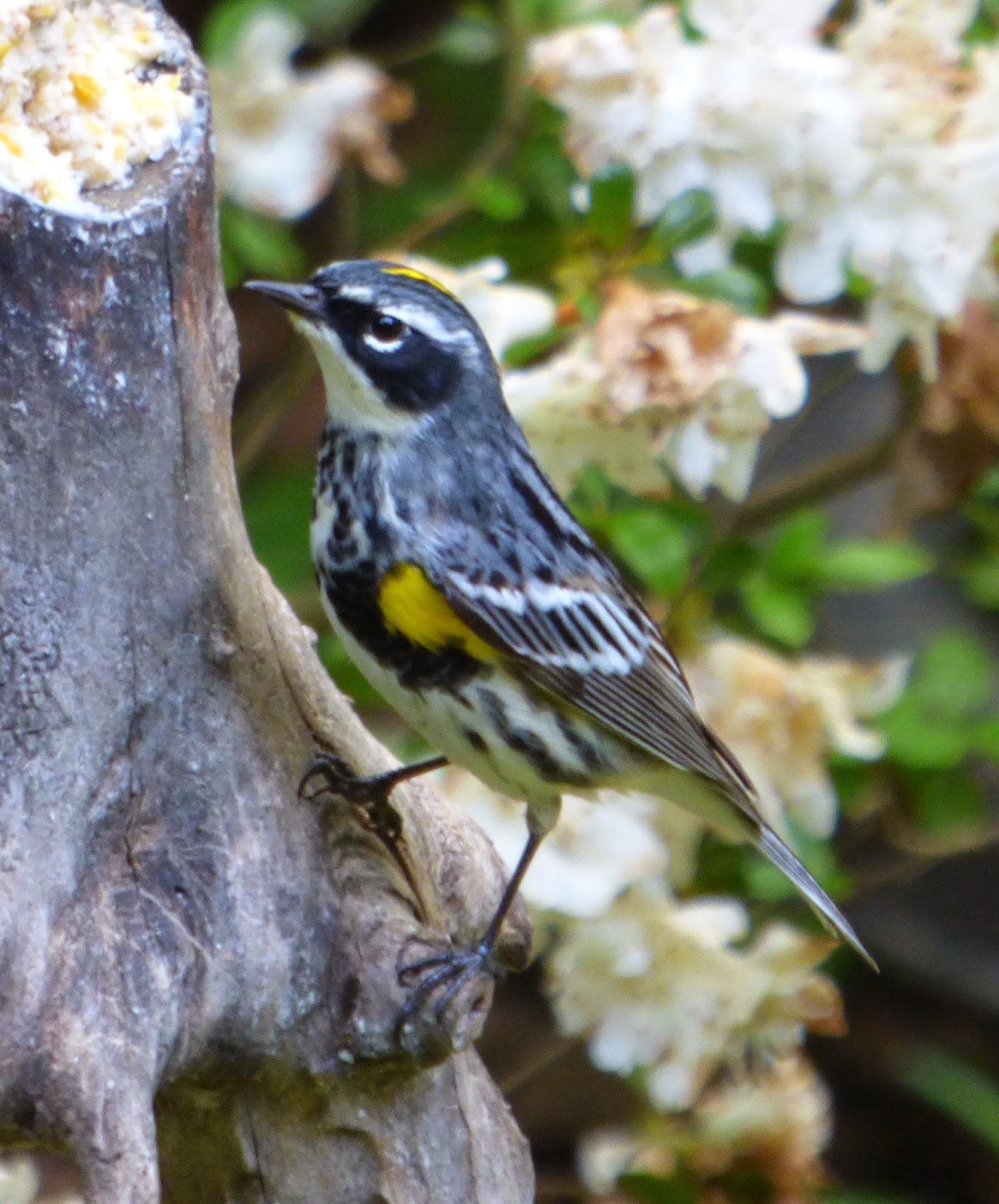 This member of the wood warbler tribe has a large patch of black feathers on his cheek and another surrounding his bright yellow shoulder splotch. There is a streak of yellow on his crown as well as the definitive yellow rump patch that gives these birds their common name. Wood warblers are primarily insect eaters.  Their sharp thin beaks are well adapted to catching these food items.  In the east, this species was formerly named Myrtle Warbler because of the large numbers of wax-myrtle berries (also called bayberry) they consume.  Most other warblers are not able to digest these waxy berries.  The Yellow-Rumped Warbler's ability to strip off the waxy coat during digestion actually aids in the germination of the wax-myrtle seeds later. 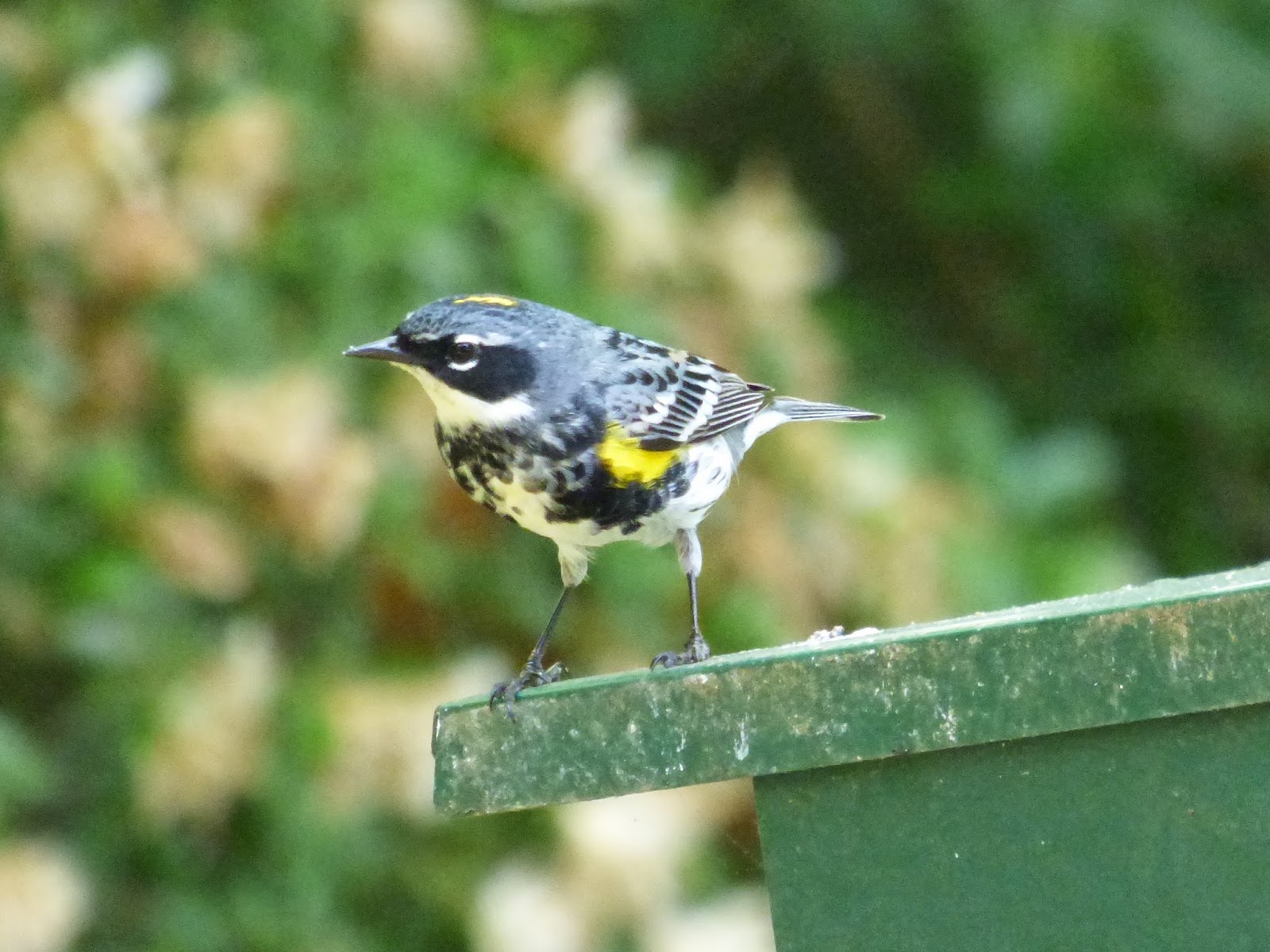 The male Yellow-Rumped Warbler has a bright white throat and belly in his summer plumage. 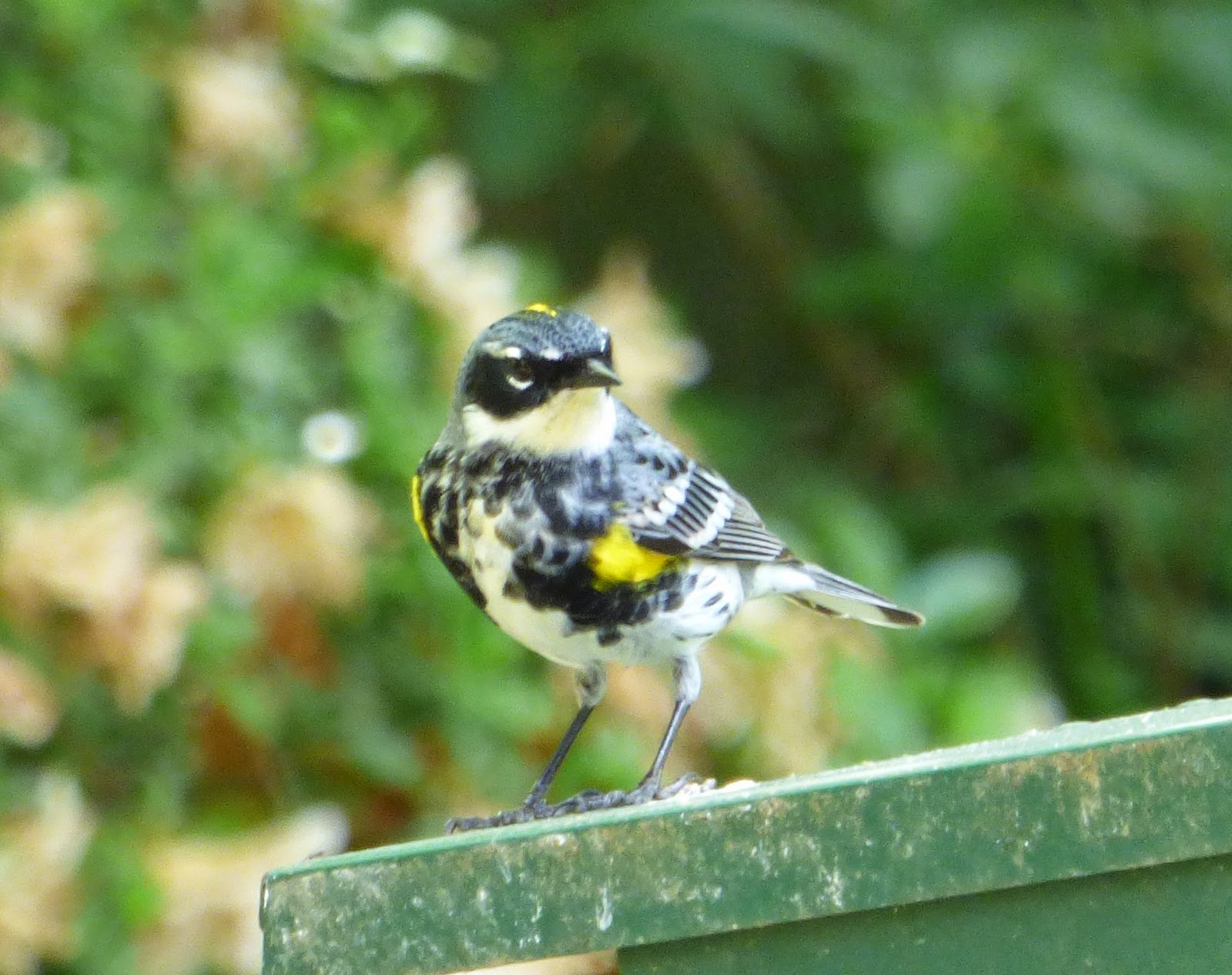 Posted by From Bluebirds to Turtles at 6:46 AM