MOTHS OF LATE MAY AND EARLY JUNE

I've turned into a bit of a moth nut in the past couple years, but particularly recently. It all started when I attended a Moth Night event at the North Carolina Museum of Natural Sciences facility at Prairie Ridge EcoStation in July two summers ago (2013). The 8 p.m. to midnight event exposed me to so many moths out there that I did not know existed. There are so many thousands of moth species and I only knew a few.
UNDER THE LIGHTS


Last summer I bought a Mercury Vapor Lamp (MVL) security light fixture online and then found the MVL lamps (bulbs) at a local big box hardware store.  I did a little wiring to make this broad spectrum lighting unit portable enough for me to set up on the spur of the moment.  And I bought a black light to add another moth attracting dimension.  I first tried it out in July last year when our grandsons were in town.  We saw several moths and some beetles.  Nearly a year passed before I hung up the white bed sheets again and got the lights set up. I've been checking the sheets for moths since late May.

At work I found this moth on the sidewalk near the front entrance.  It has a very fuzzy/furry head, is light brown in color with two creamy white lines that cross its wings from side to side.  So this turns out to be a very common moth that I had not taken notice of before.  This is the adult form of the Eastern Tent Caterpillar that builds its web-like nest in early summer in the limbs of cherry trees and other trees of the Rose family. The fuzzy caterpillar has lovely blue, black, orange and white markings along its sides and a creamy colored line along its back.
(link to Eastern Tent Caterpillar) 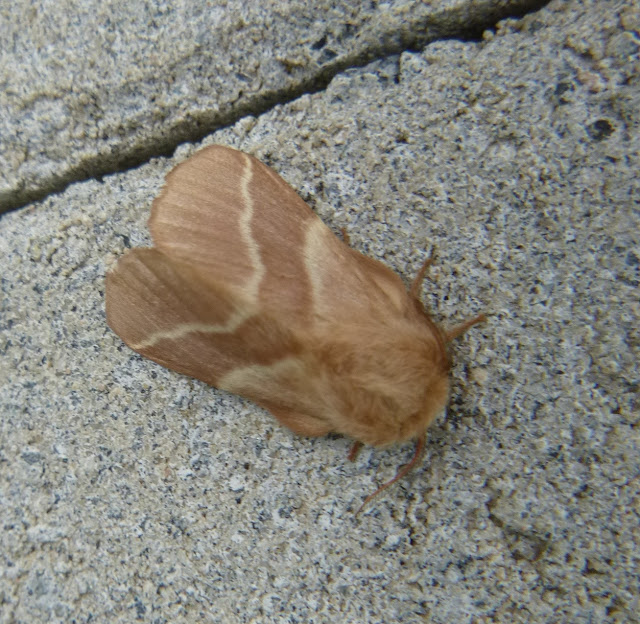 The first night I had the lights going, I found another Eastern Tent Caterpillar Moth on one of the sheets. Its feathery antennae lets us know that this is definitely a male moth. The wings are a little darker brown than the one I found at work, but there is some variation in color in many species of moths. 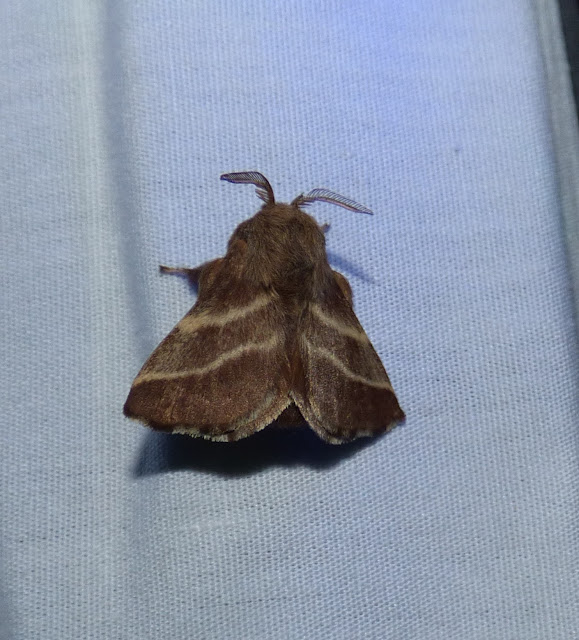 Some of the first moths I saw at both the porch lights and the mercury vapor lamp were these white moths.  I did not notice the markings at first until I looked at the digital photos I had taken. Some individuals had very pale lines that were hard to detect in the bright light.  I used Google to try and identify this moth but was not certain I had the right species.  So I requested an identification check on the Facebook group I joined called "Moths of the Eastern US".  This group is very helpful and guided me to the correct moth species which belongs to the geometer family. There are about 1400 species of geometer moths in North America according to Wikipedia. The name "geometer" comes from the Greek for "measure the earth".

Here is a well marked individual of what I learned was a Lesser Maple Spanworm Moth. Its caterpillar form is one of the "inch worms" or "measuring worms" and is about 3/4" long.  The larvae feed mostly on maple leaves. 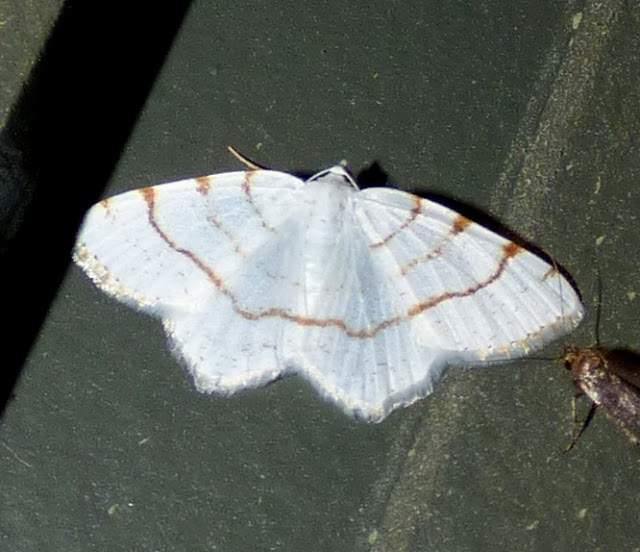 Another early moth that showed up on many nights in late May and continuing into June was this Yellow-fringed Dolichomia Moth.  It does have a yellow fringe along the trailing edge of its wings as well as a pair of yellow triangles on the leading edge (costal margin) of its wings.  Its overall color is rather purplish.   I used Bugguide.net and the Moth Photographers Group websites to identify it.  I learned through Buguide.net that the caterpillar of this moth feeds on oak leaves.  Well, we live in a wooded neighborhood with many, many oak trees!

(link to Bugguide page for this moth) 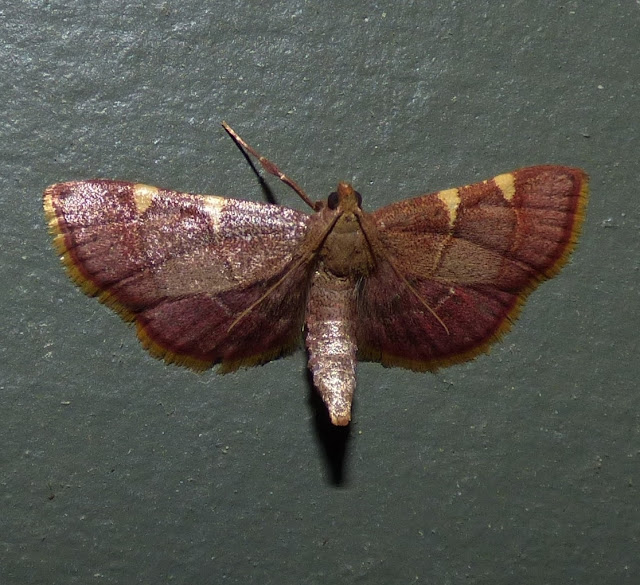 One of the moths that I learned about two years ago at the Moth Night event is the delightfully colored Rosy Maple Moth.
This is the first one I found at home near the mercury vapor lamp.  The caterpillars of this moth feed on the leaves of maple trees, but also beech, sycamore, and oaks.  This is actually a very common moth in our area, but its beautiful pink and creamy yellow color gives me a bit of a thrill each time I find one. 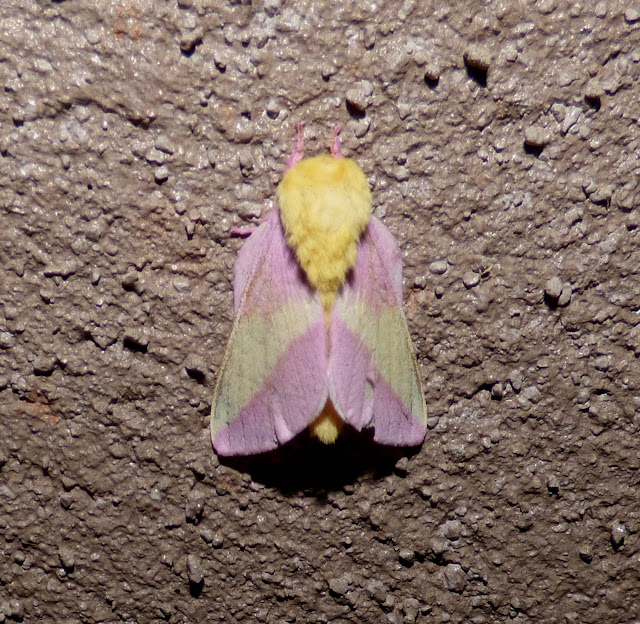 A few nights later I found three more Rosy Maple moths. Although smaller, they are related to the Giant Silkworms moths like the Luna Moth and the Polyphemus Moth. This male moth crawled right up on my thumb for a photo.  He has the large feathery antennae of male moths. 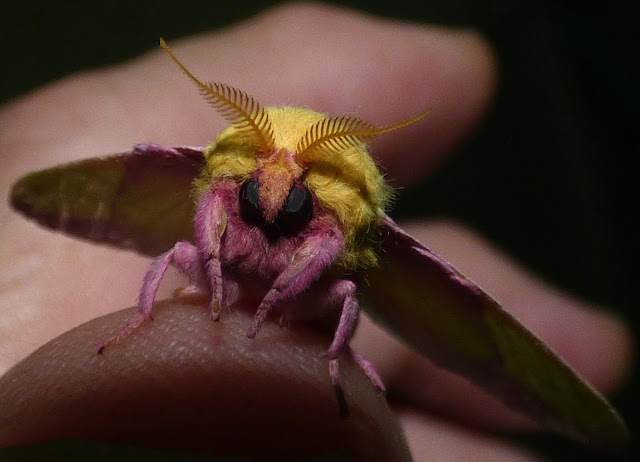 I've have seen several of these moths over the last week of May and into the early weeks of June. The colors of this Painted Lichen Moth seemed quite fashionable to me.  The wing color starts as yellow at its head and transitions to deep orange at the tips. There are broad gray stripes that run the length of the wings. The caterpillars of these pretty moths are found feeding on trees where patches of lichen and moss have established colonies. 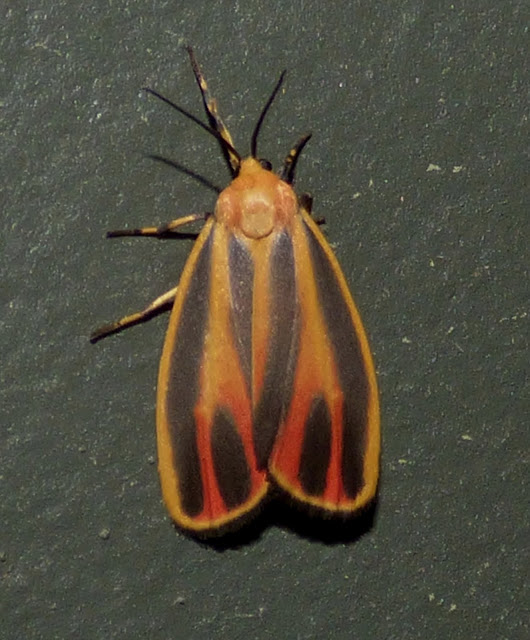 This moth showed up on the painted siding away from the lights in late May.  From the feedback I received from the folks at Bugguide and the Facebook moth group, I am pretty sure this is the Red-headed Inchworm Moth.   At first it seemed to me to be an older worn individual, but the guides say that the lines that extend from the dark marks along the leading edge of the wings are often faded.  The caterpillars of this species feed on pine. 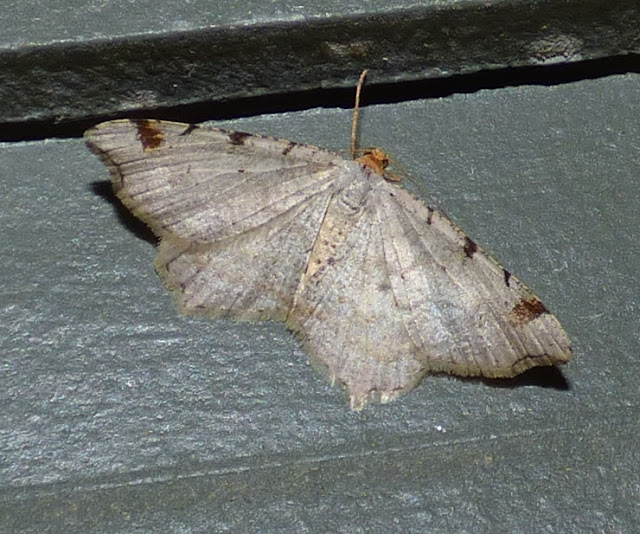 Another moth from late May was this Decorated Owlet Moth which has a wingspan of about an inch.  Its scalloped wings are indeed decorated with yellows, browns, and purples.  The caterpillars are thought to feed on the leaves of blueberries. 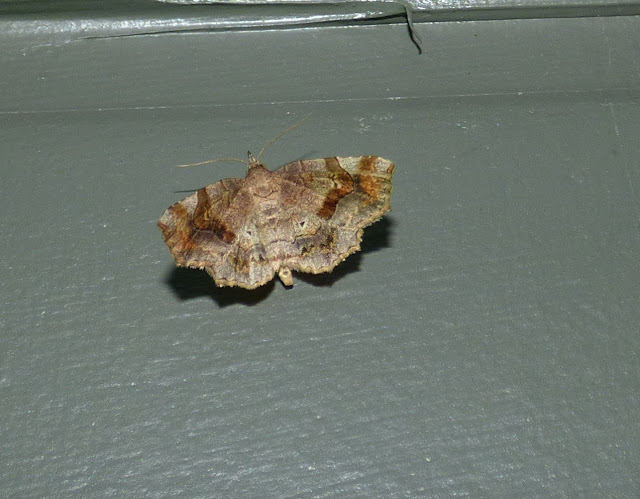 This is a close-up of the same Decorated Owlet Moth. 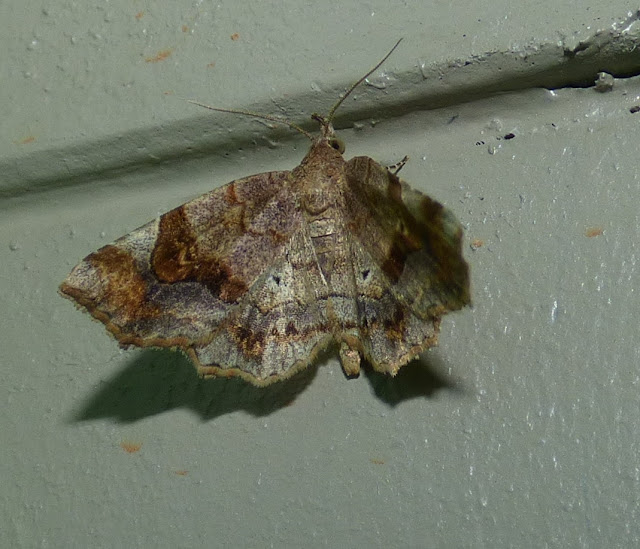 Besides putting up lights to attract moths, I also decided to try sugaring for these night-flying insects.  I read about making "moth sugar" which has varying recipes, but often included a few very overripe bananas, brown sugar, molasses, maple syrup, etc.  I blended the ingredients together and sat the lightly covered container in the sun for a few hours.  Just before sunset, I used a paint brush to spread the moth sugar on the trunks of two trees about three to four feet above the ground.  I also painted a few leaves with this concoction.  So far I have not had a lot of visitors.  With much help from the Facebook group I was able to identify two of the species that I was able to photograph.

The first visitor that I found coming to the "moth sugar" was this Rotund Idia Moth that landed on a mulberry leaf.  It was identified for me by friends on the Facebook group, Moths of the Eastern US.  Bugguide.net describes this moth as having a "shiny, sooty black forewing with obscure dusky lines".  Its larvae feed on dead leaves and coral fungus. 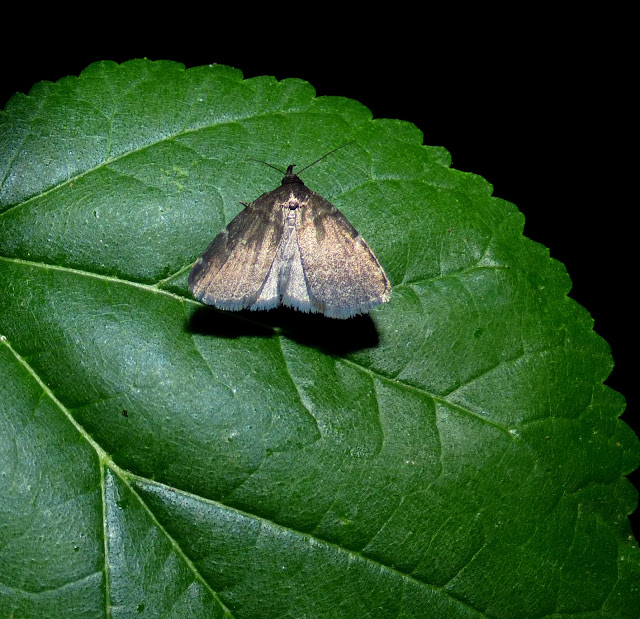 The other "moth sugar" visitor was also identified for me by the Facebook group.  This light brown moth with brownish-orange lines is a Morbid Owlet Moth.  It was feeding on the "bait" on the trunk of a Winged Elm Tree. Bugguide indicates that the caterpillar of this species feeds on the dead leaves of deciduous trees. 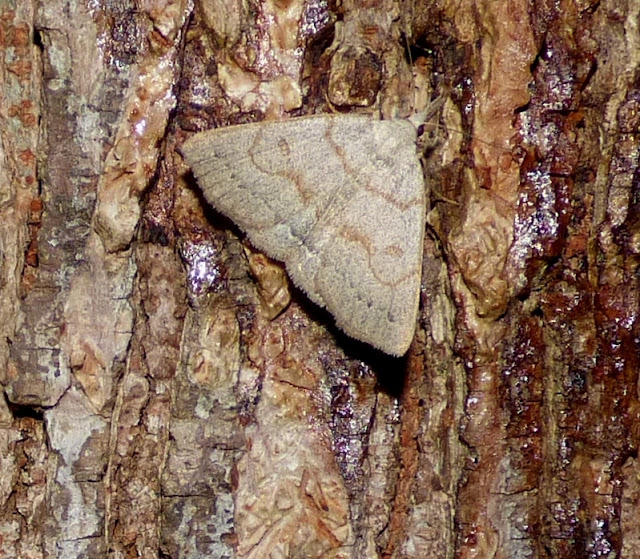 It has been a busy summer taking photos of moths and other insects as well as the White-tailed Deer that have been visiting the backyard.  I hope to catch up soon with posts that share the other summer treasures I've found.  I have posted a number of these on Facebook each week, but I hope to give more detail here in the coming weeks.

Posted by From Bluebirds to Turtles at 6:09 PM 3 comments: