BABY BIRDS IN OUR NEST BOXES

I visited the Home Boxes around lunchtime today (May 2nd). Hope to go over and check on the Lab Boxes tomorrow.

I found the Eastern Bluebird eggs in Home Box #1 freshly hatched on the evening of April 24th.  One of the eggshell halves was still in the nest. 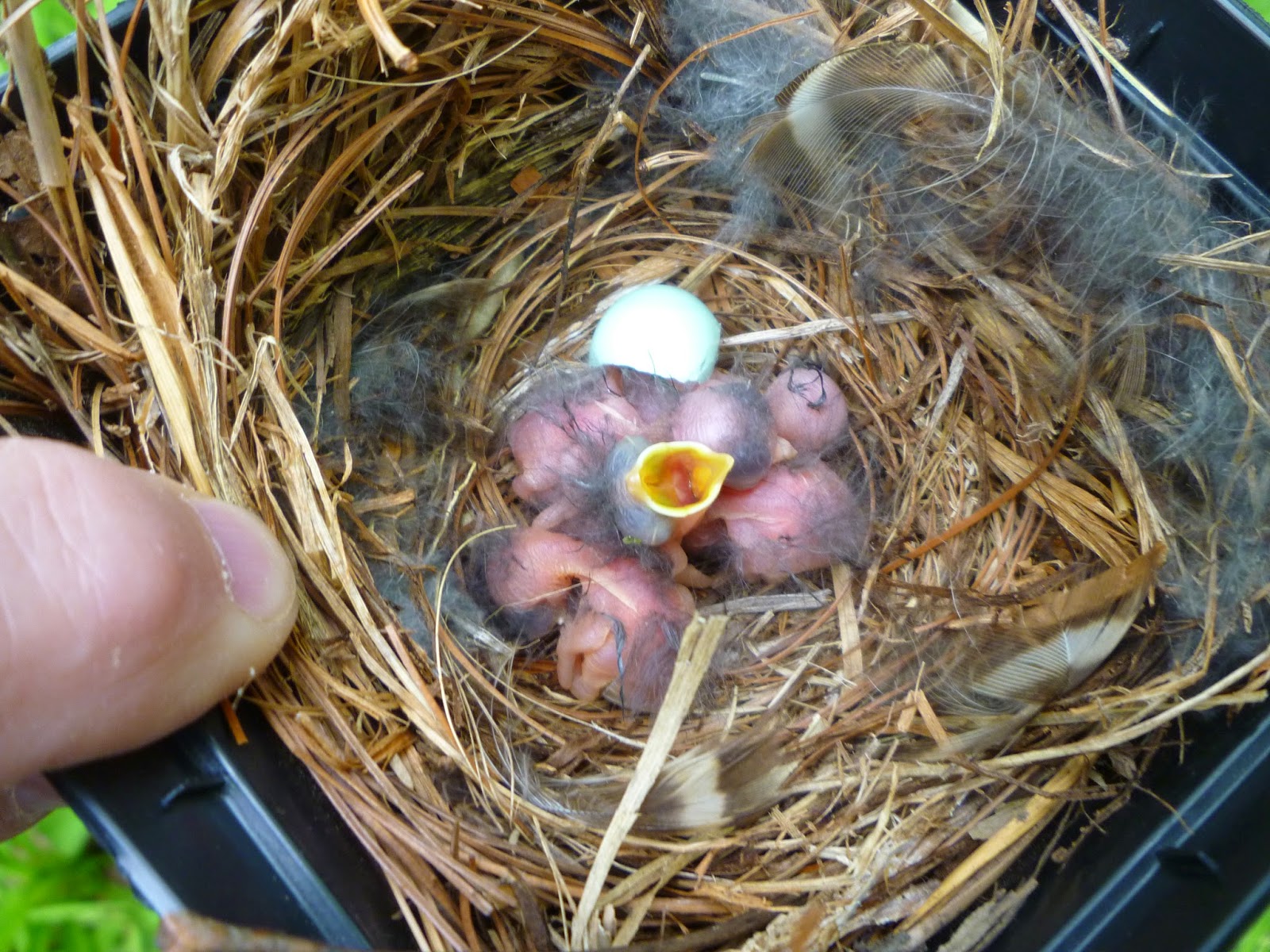 On April 28th the little four day old bluebirds have doubled in size and are showing a lot of fuzzy down and the beginnings of feather tracks along their flipper-like wings. 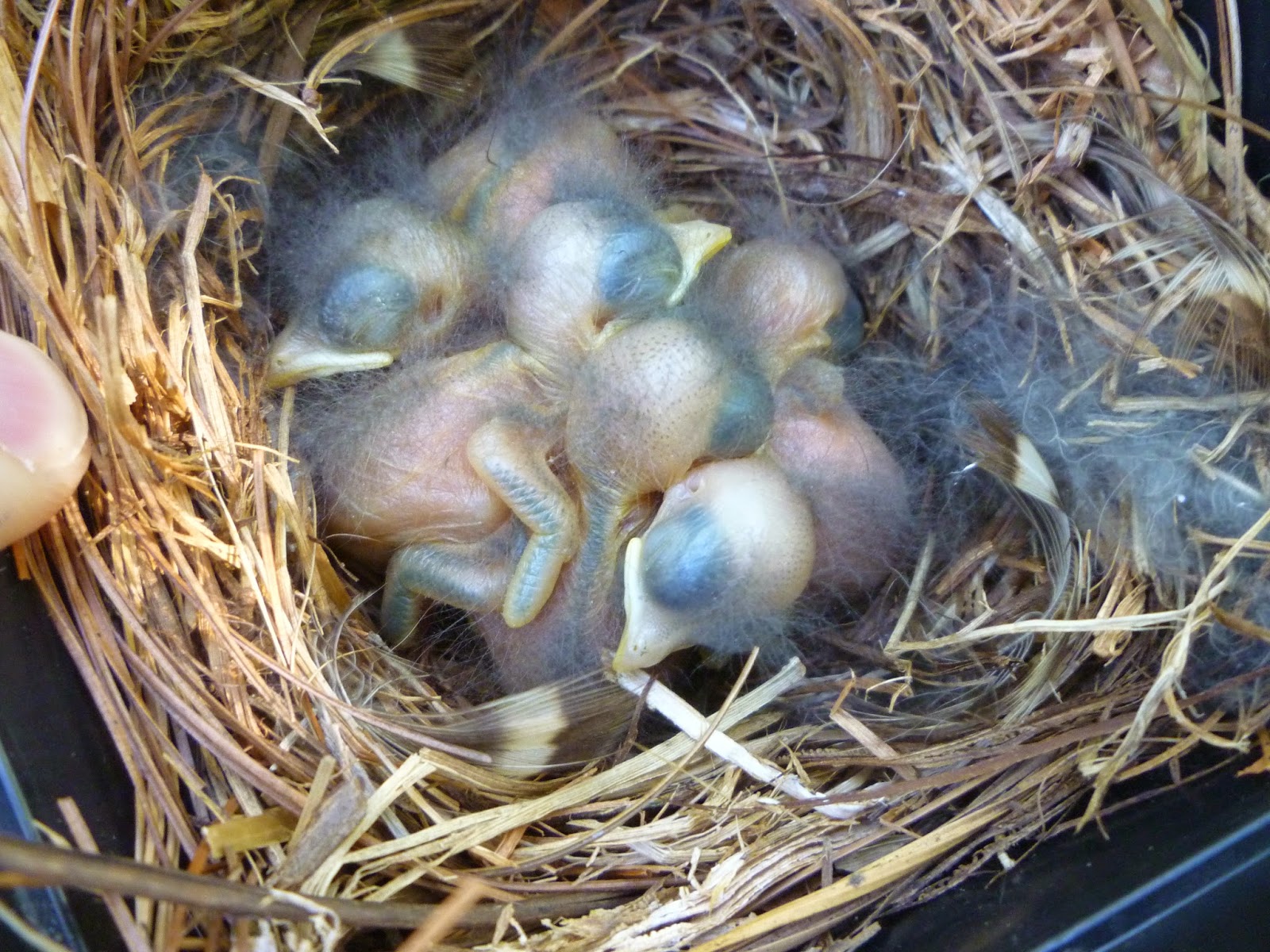 On May 2nd these little guys are now eight days old.  Their eyes have not yet opened, but you can see the development of the feather tracks along the crown of their heads and down their backs.  The feather sheaths along the back edge of their wings are developing nicely. 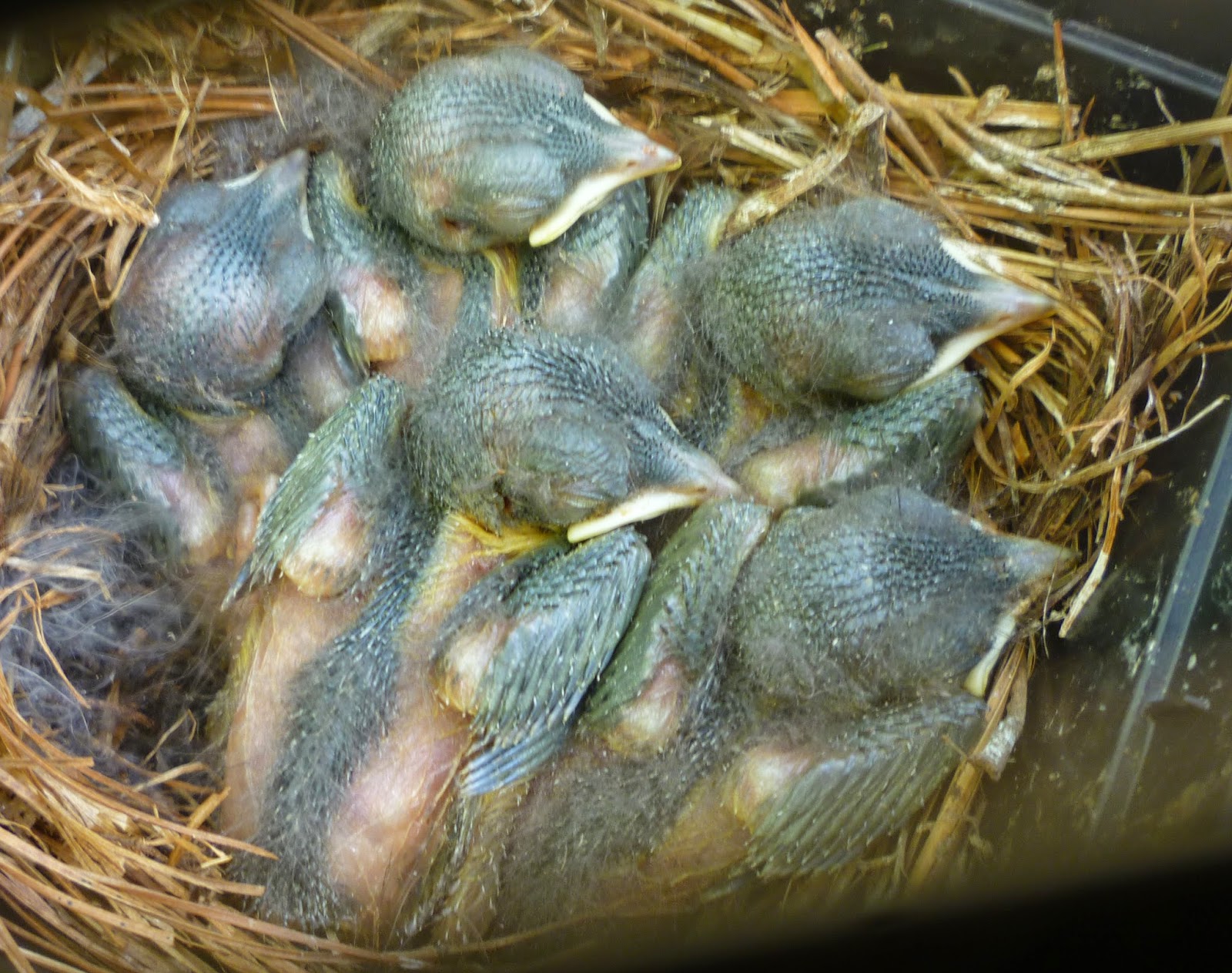 The tip end of my index finger gives an idea of how much these babies have grown in the past 8 days.  You can also see the ear canal openings on at least two of the five nestlings. 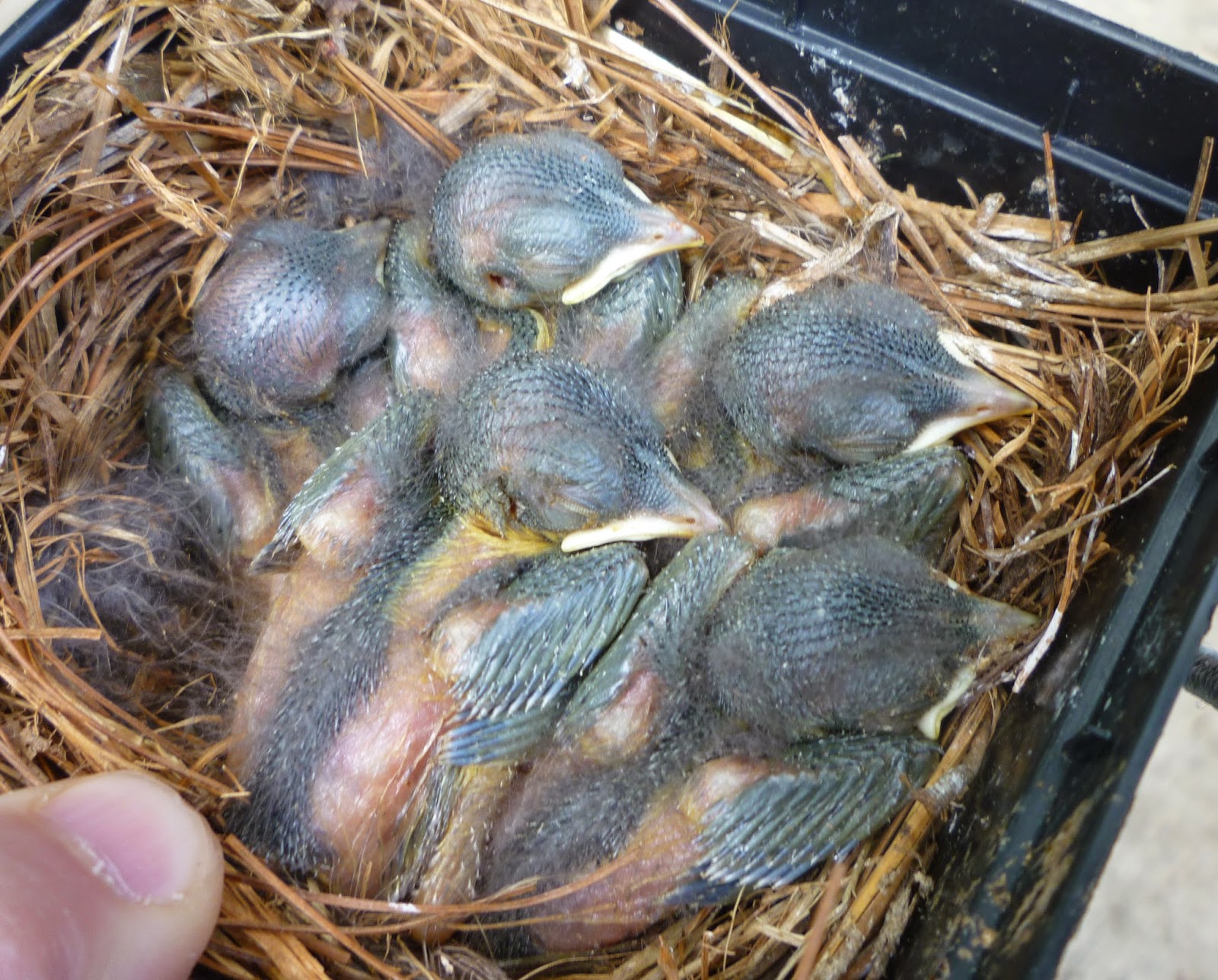 I recently found a supplier for some nice lively mealworms to put out for the adult bluebirds to share with their babies (wrens and titmice are stopping by, too).   RedHen is a strong advocate for environmental conservation, and uses her yard to grow all sorts of edibles.  She is also a public school resources person who teaches students the importance of the four R's of Environmental Conservation: Reduce, Reuse, Recycle, and Rethink (Re-purpose).  In addition, she teaches them how to make what she calls "Black Gold", (rich, black compost to use in gardening) by employing earthworms to breakdown fruit and vegetable scraps from the kitchen.

(link to the 4 R's of Environmental Conservation)

I opened some of the windows in our little "bird room" for a while this afternoon so I could take a few pictures of songbirds at the feeders.  The plastic container in which I am storing the bulk of these scrumptious little mealworms was sitting uncovered on the table near an open window.  After being out of the room for a few minutes, I came back to find one of the mother bluebirds perched on the container's edge selecting the juiciest worms for her babies. 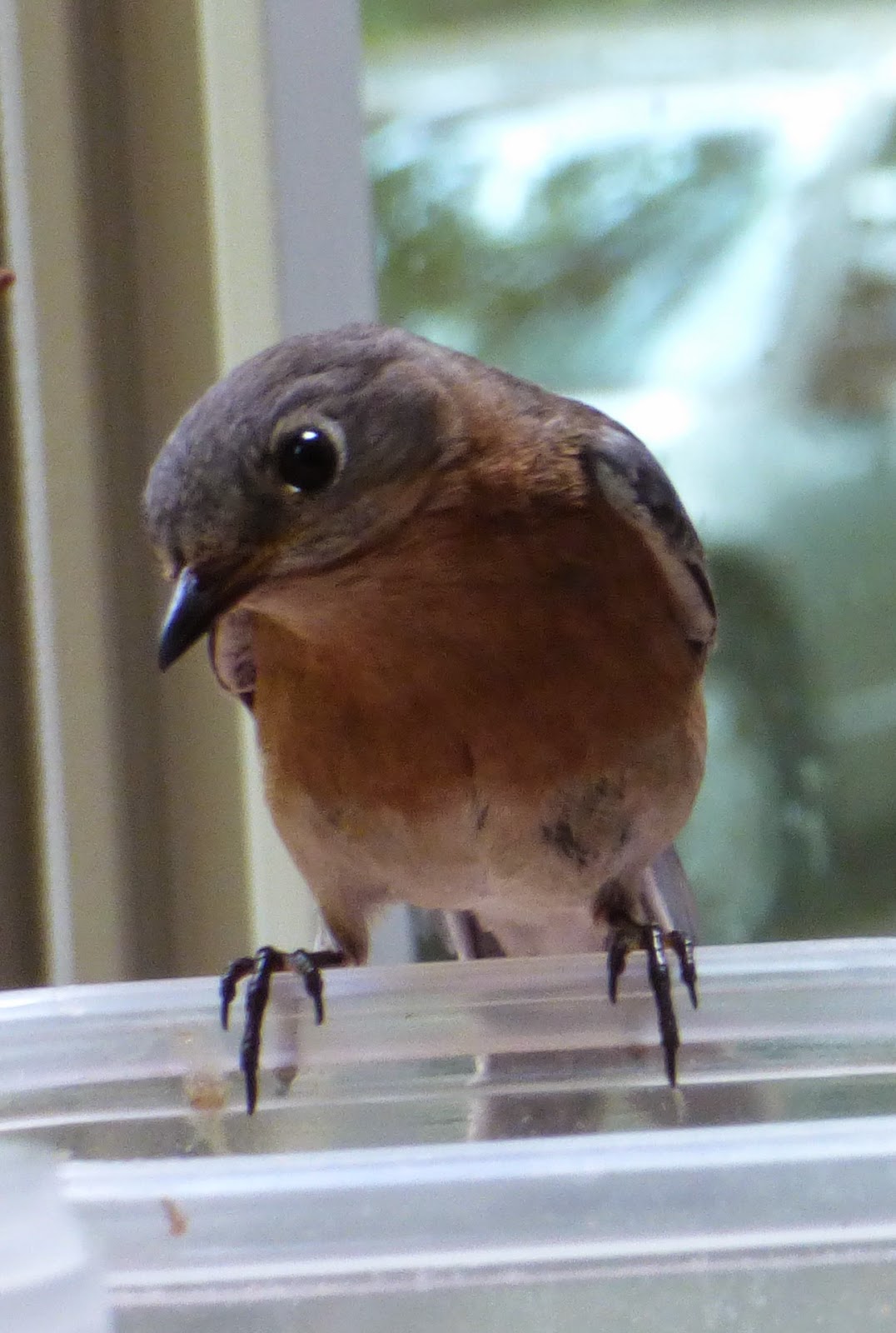 I also tried out the video feature on the new camera.  Here is that beautiful female Eastern Bluebird waiting for me to leave the "bird room" again.

On April 28th the Brown-headed Nuthatches in Home Box #2 hatched.  There were six little eggs just the day before and I am pretty sure there are six little hatchlings somewhere in this pile of avian tininess.  They are smaller than my thumb nail. 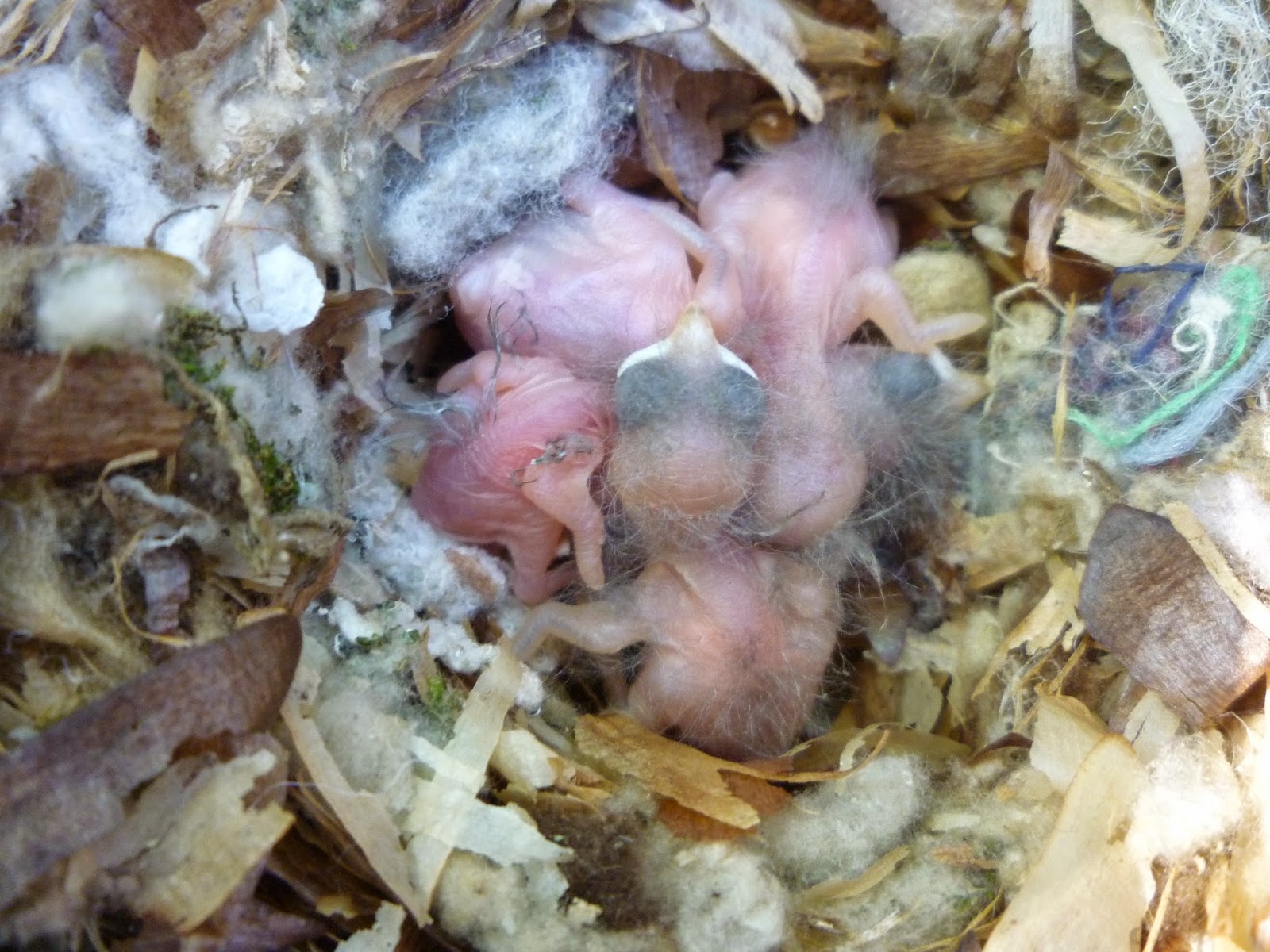 On May 2nd these little guys are four days old and they are not shy about asking to be fed.  The adult nuthatches are shuttling back and forth to take care of these six siblings. 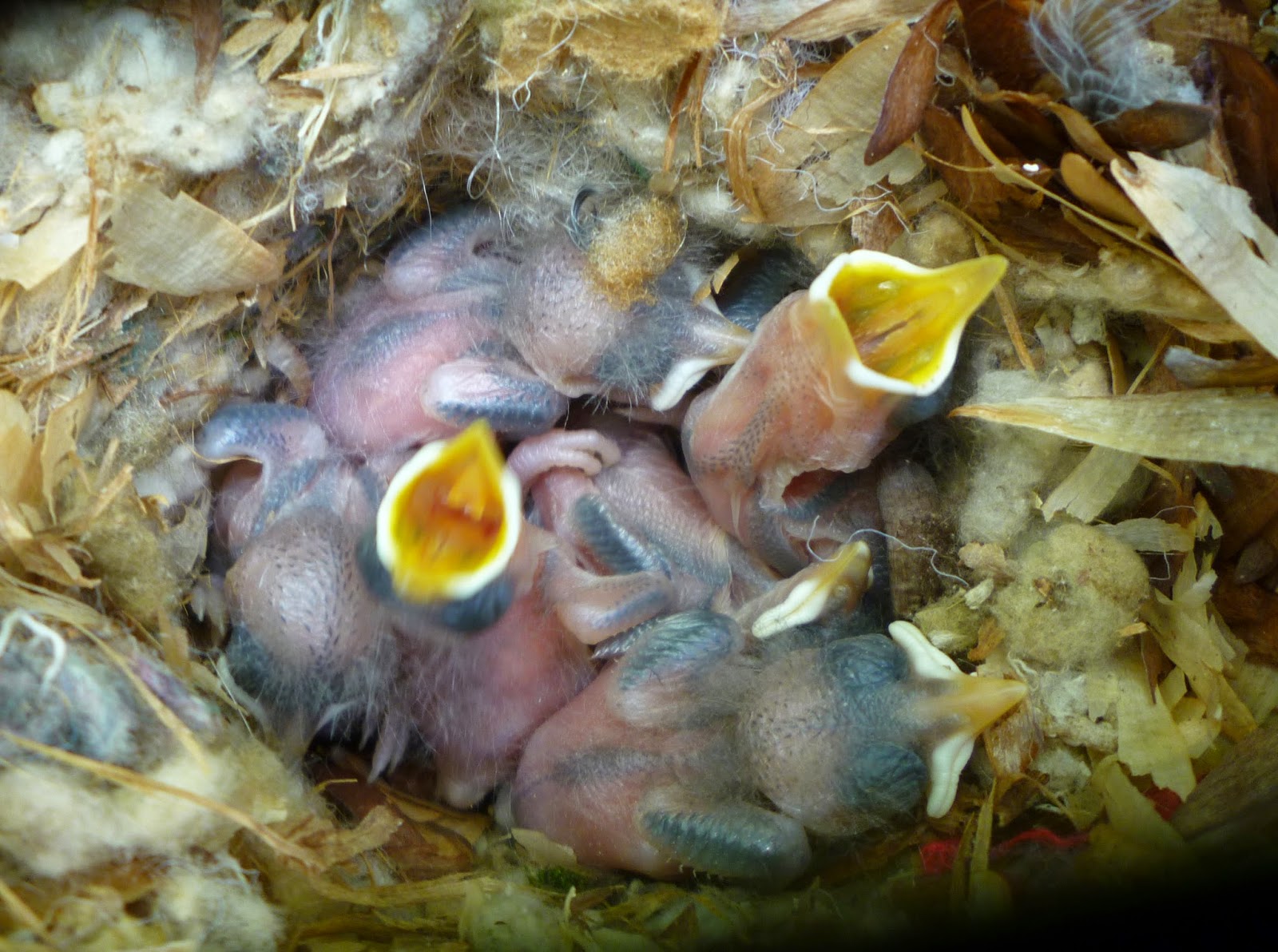 Their yellow gapes are trimmed with white borders to give the adult birds good targets for placing food items in the darkened cavity of the nest box. 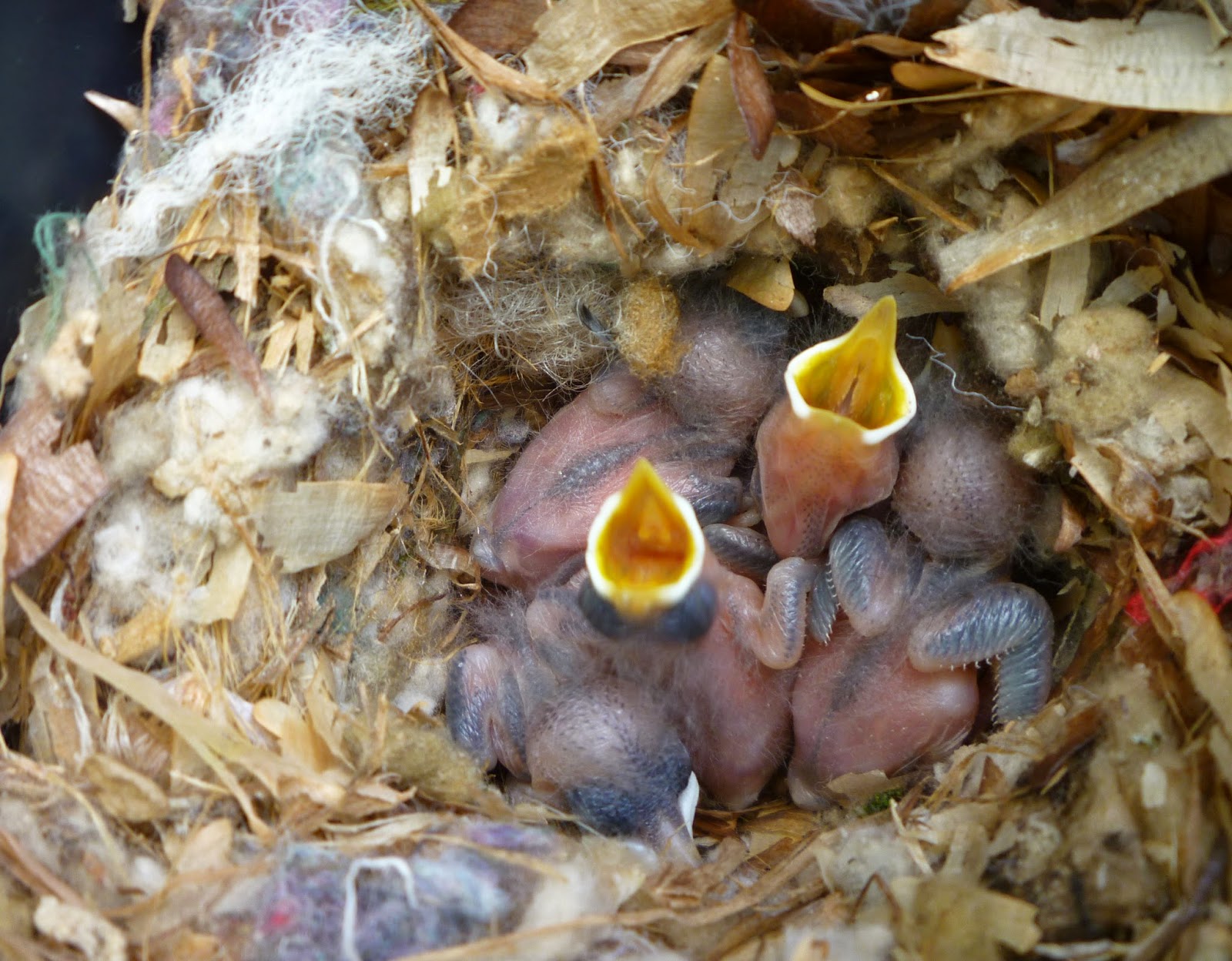 There are definitely six little beaks (or parts of beaks) visible in this picture. 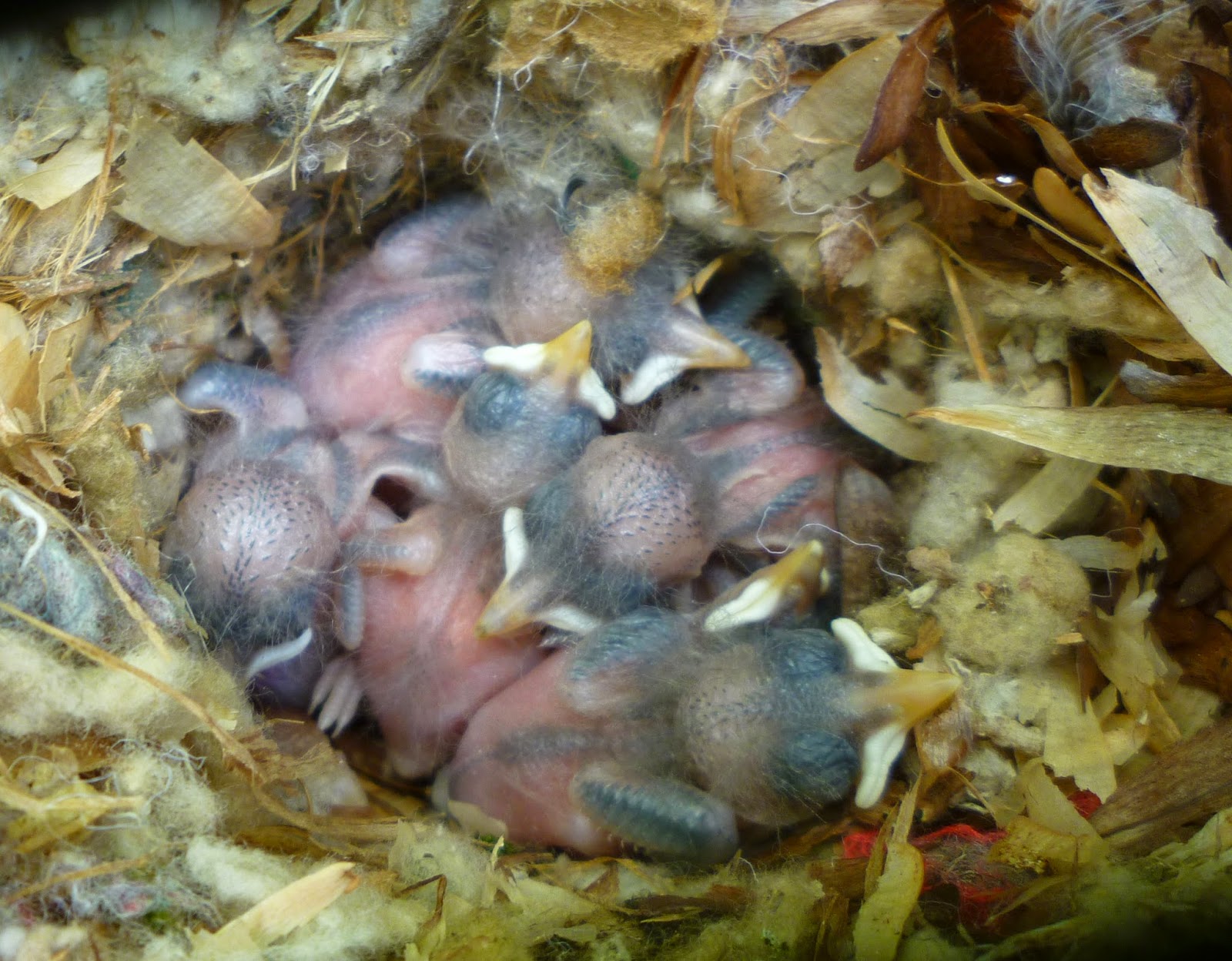 
May 2nd appears to have been hatching day for the young of the Tufted Titmouse pair that nested in my "big" Great Crested Flycatcher nest box which is mounted on a ten foot pole.  As we look out from the windows of our back bedroom, the box is rather hidden from the view by the leafy branches of a Winged Elm, so I had made my earlier supposition of which species had built this nest on its composition.  I assumed from the mossy material I had encountered in Carolina Chickadee nests over the past years that this was a chickadee nest.  Just a few days ago as I tapped on the pole before lowering it to check the nest's contents, I thought I caught a glimpse of a White-breasted Nuthatch fly from the box.  Well, today it was obvious that it had been a titmouse pair all along.  The parents are coming to the deck for live mealworms to supplement their hatchlings' diet. 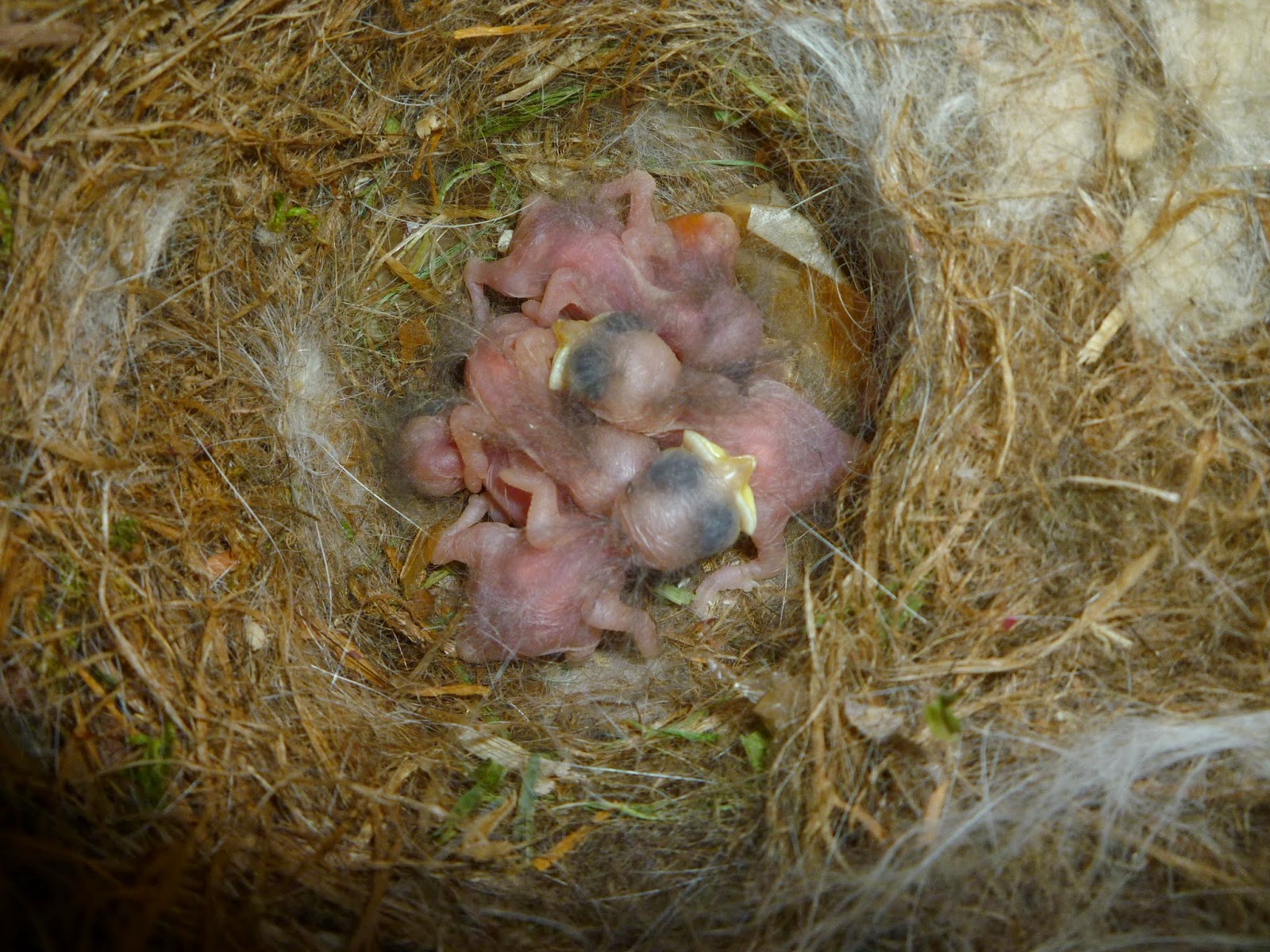 This little titmouse has its head up and mouth open, ready for the next morsel from mother or father bird. 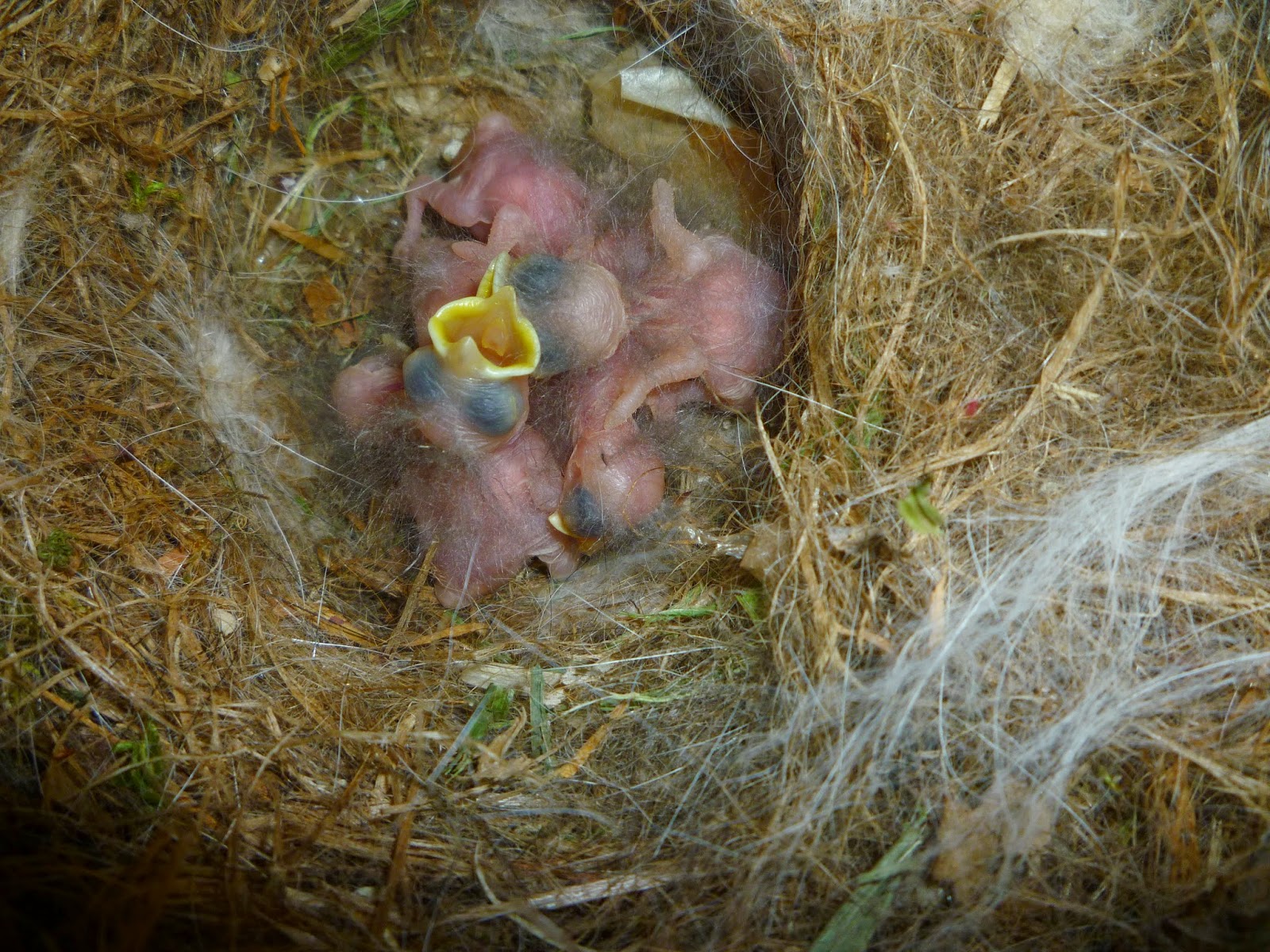 I can count at least five hatchlings, but I am hoping there is a sixth underneath as the mother bird laid six eggs.  I should be able to tell next week when I check on the nest again. 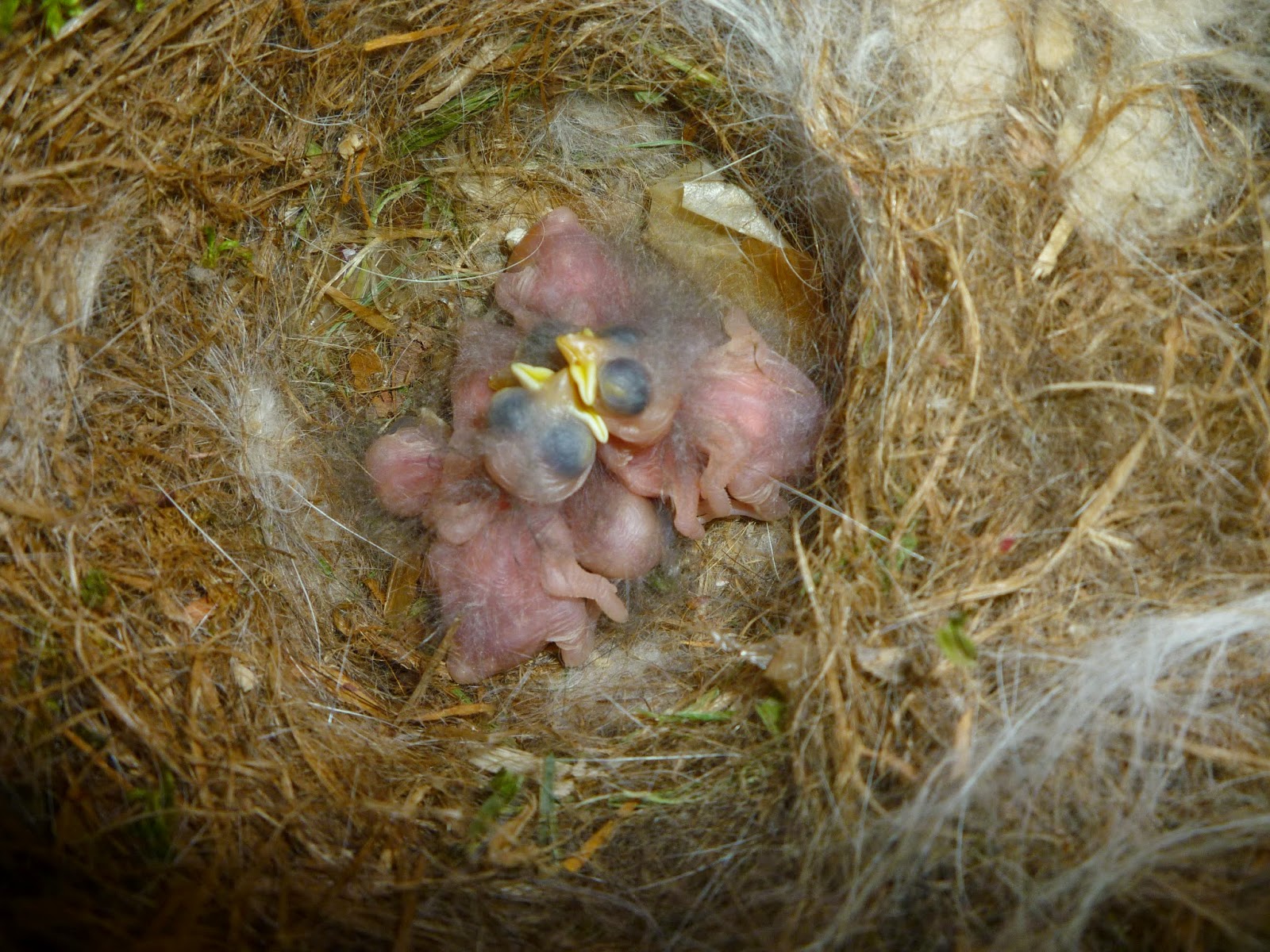 The Eastern Bluebirds in Home Box #6 probably hatched early on May 28th.  I visited in the late afternoon and all four chicks look pretty dry.  Both parent birds dive-bombed me pretty strongly during the 20 or 30 seconds I was at their nest box. Adult birds do "love" their babies! 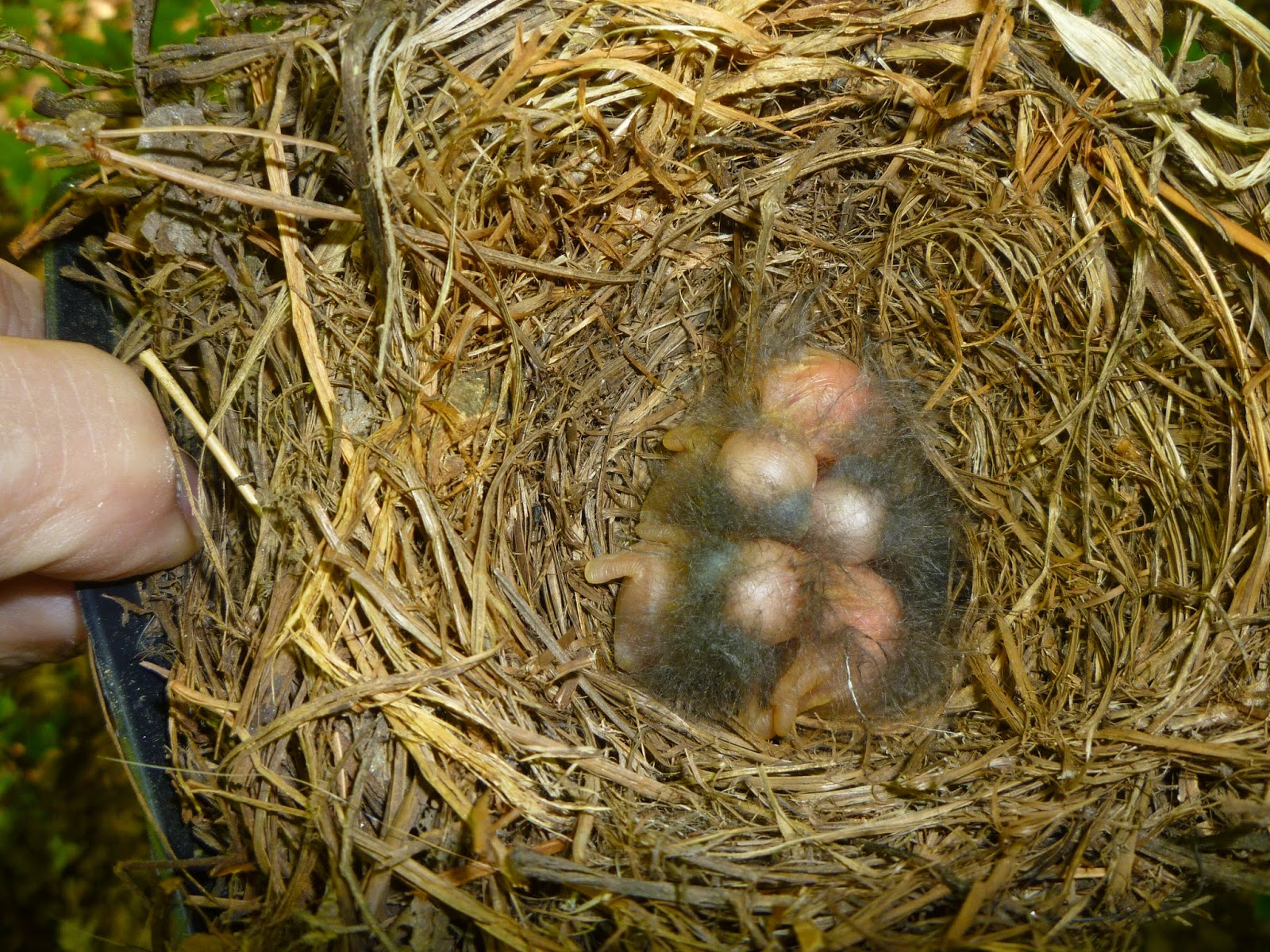 On May 2nd the four little four-day old bluebirds are all snuggled in.  They have a solid pair of parent birds watching over them and keeping them well fed. 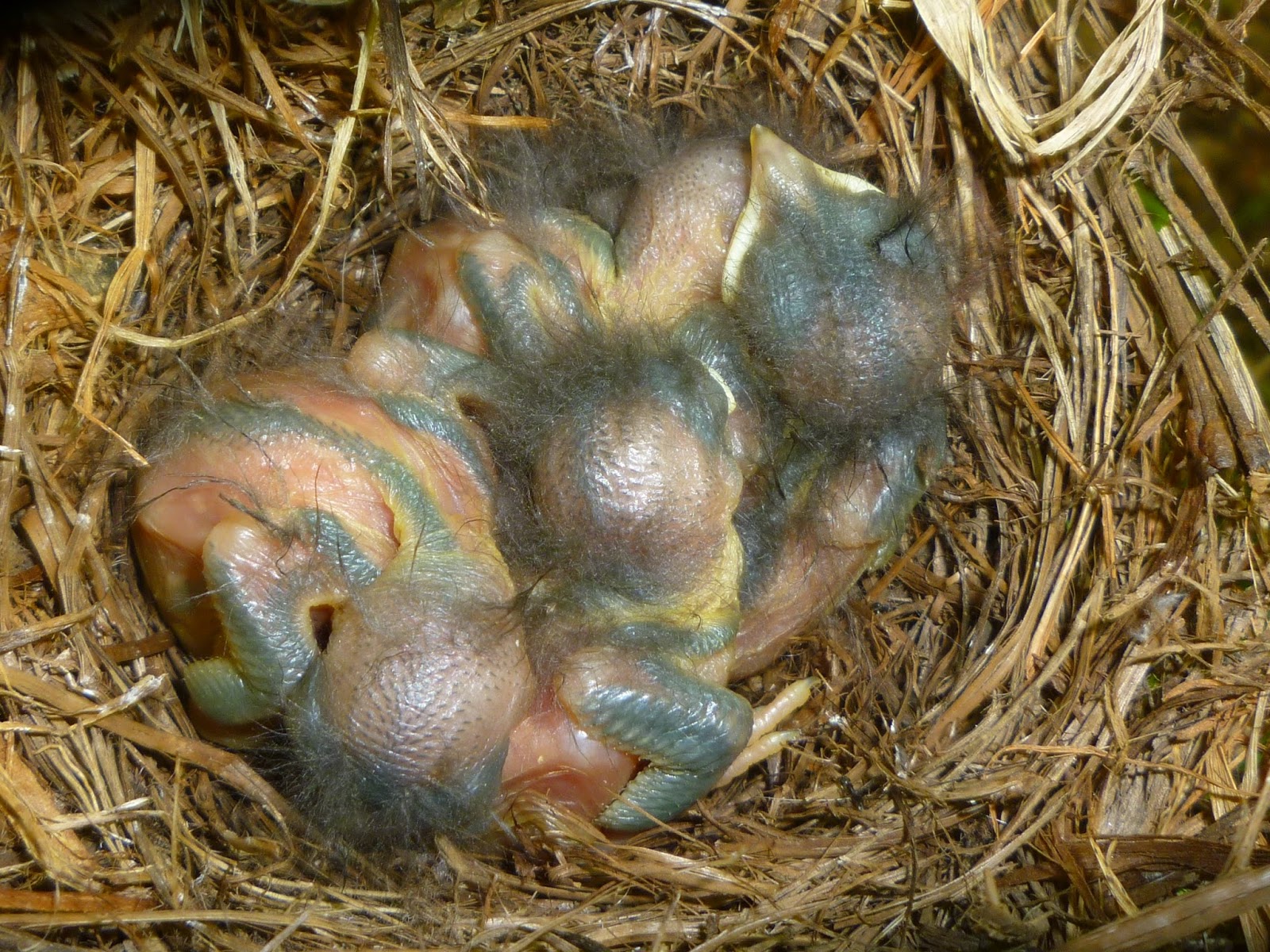 This picture was taken a few seconds later with no flash. 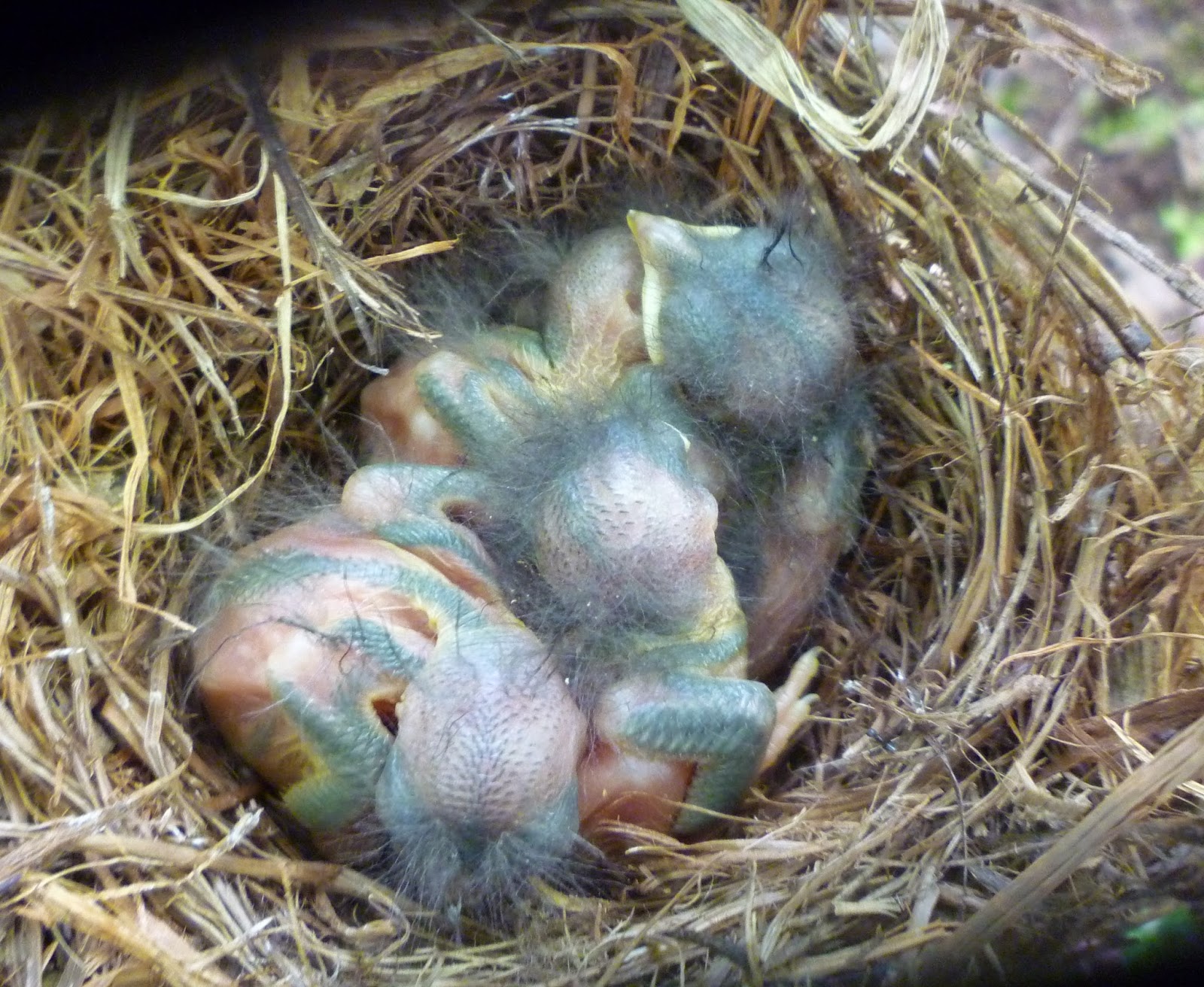 This is a Male Eastern Bluebird at one of the saucers I placed on the deck railing today to "hold" live mealworms.  I see two trying to escape!  This male is a brave individual who has dive-bombed me so closely when I was checking his nest that I could feel the wind from his wings. 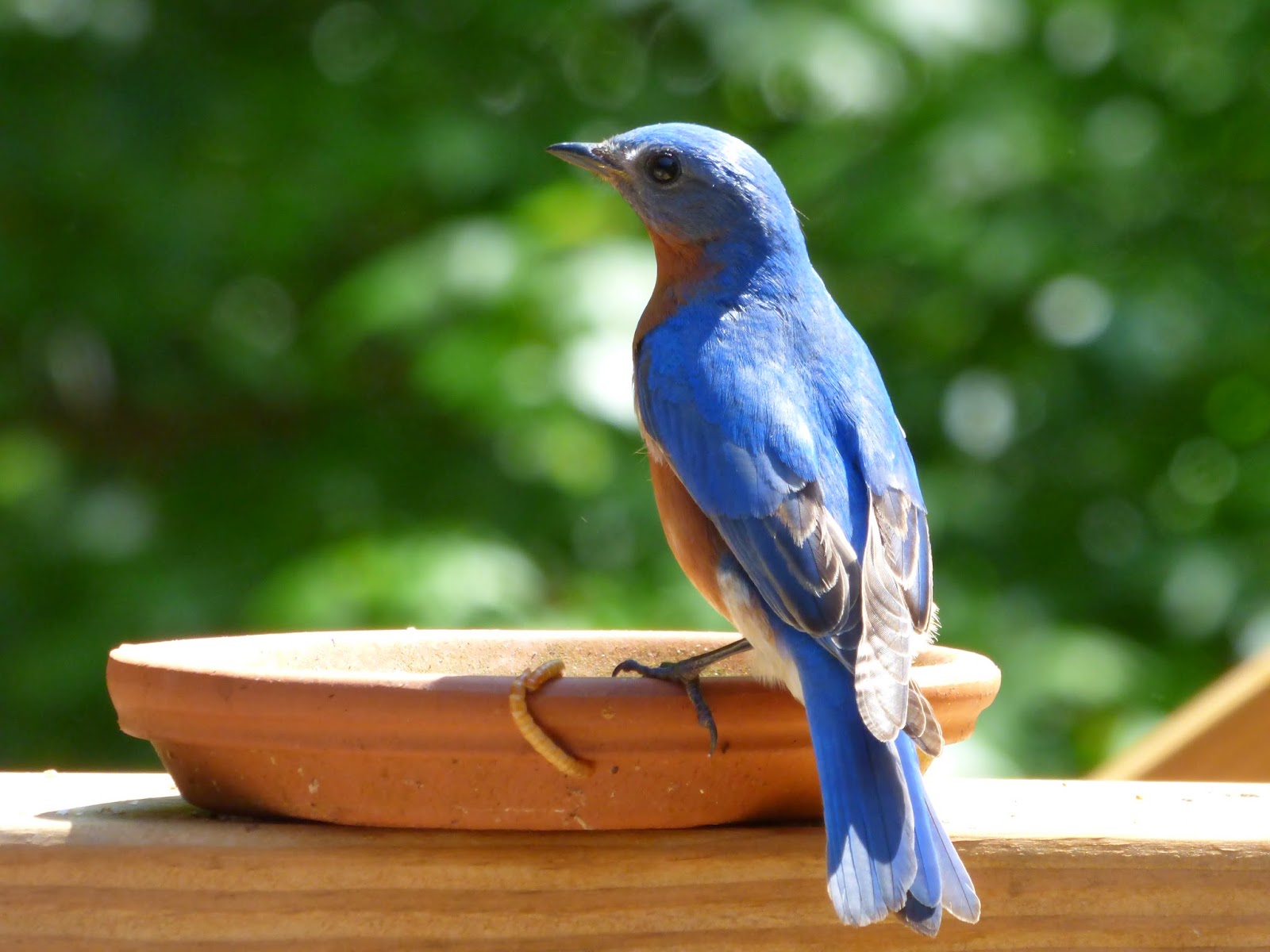 This is the female Eastern Bluebird mate to the male bird above.  She often carries more than a few mealworms in her beak at a time to feed her four babies. 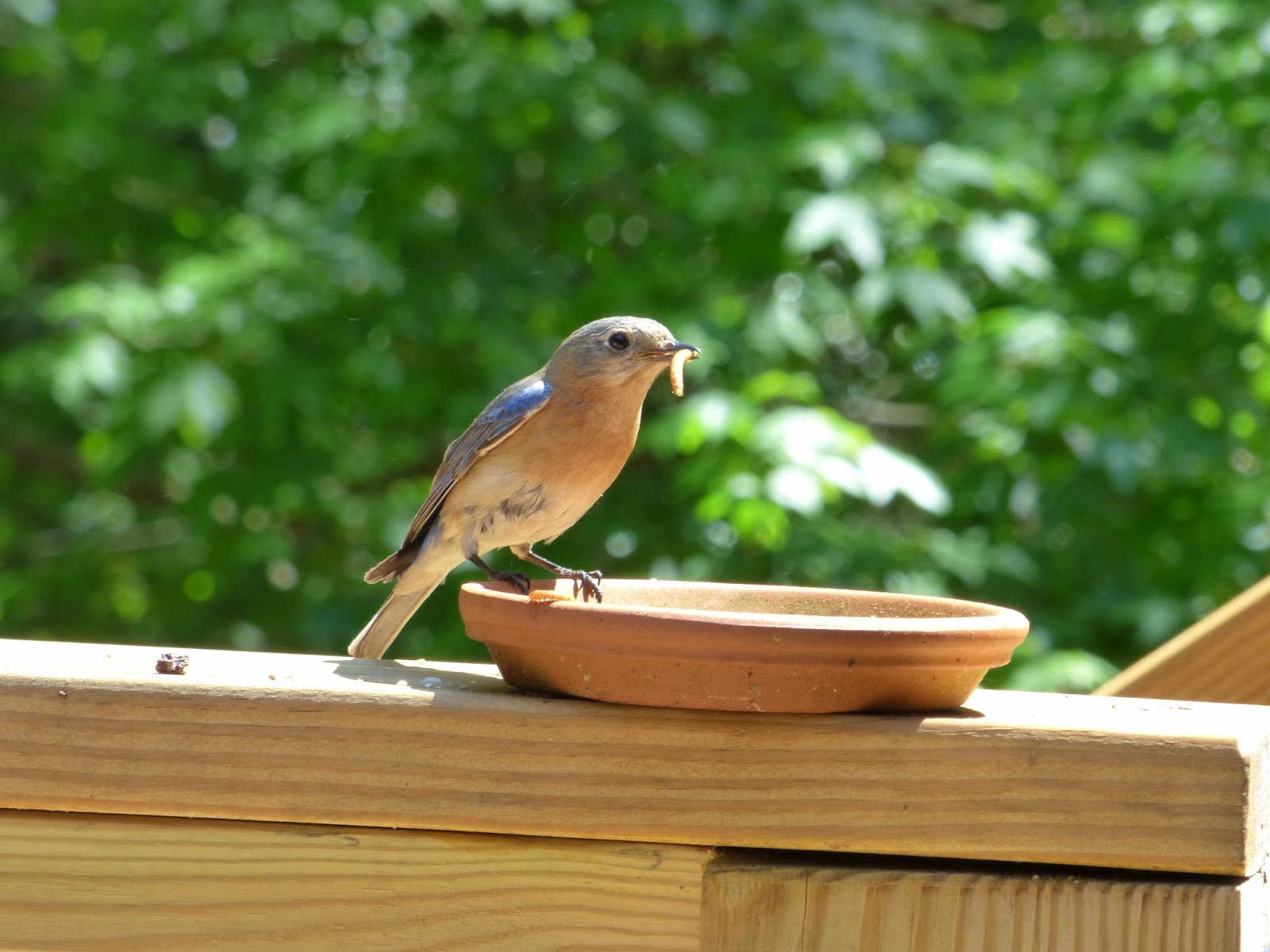 Posted by From Bluebirds to Turtles at 1:11 AM