LAB NEST BOXES ON MAY 3RD


On Sunday May 4th I drove over to the lab to check the eight nest boxes there. Here's what I found.

The Brown-headed Nuthatches in Lab Box #1 have filled out their nesting to a total of six eggs.  I look forward to seeing this bunch hatch.  It is in a location where I can invite a few folks to see the little ones when they hatch. 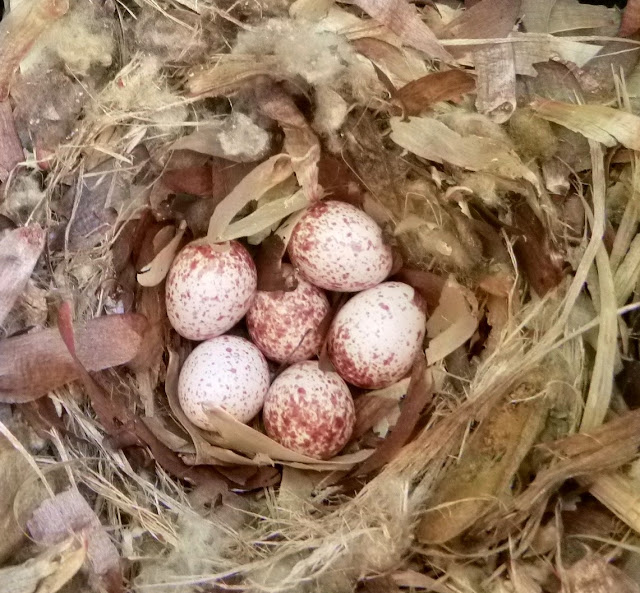 The early nest of Eastern Bluebirds in Lab Box #2 holds three young birds that are about 10 days old.  Two of the eggs in this nest did not hatch. You can see slivers of those eggs at 12 o'clock and 4 o'clock. The nestlings' wings are covered with feather sheaths that are showing little puffs of feather at their tips.  This stage always reminds me of paint brushes. 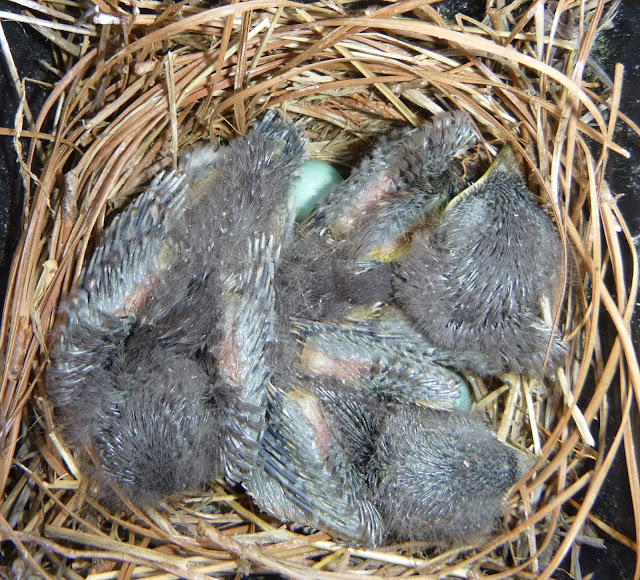 The mother Carolina Chickadee in Lab Box #4 stuck tight to her nest on May 3rd as I peeped in.   I closed the box promptly to give her the privacy she deserves 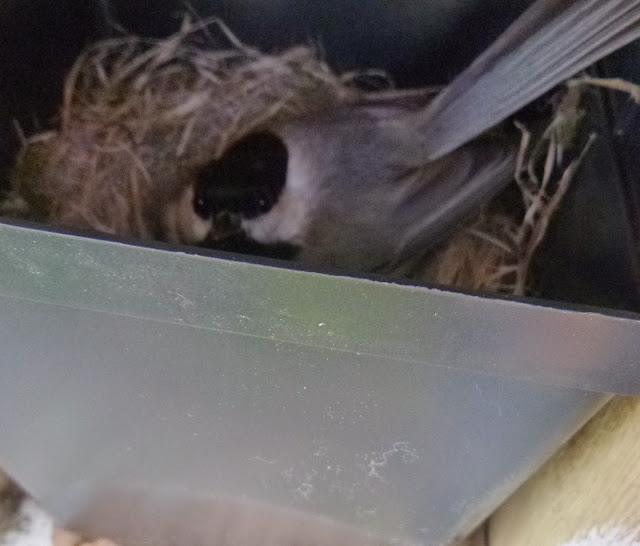 A day later on May 4th I checked again and found that five of the six babies had hatched.  I will go back in a few days to see if the sixth egg was viable.  Four of the five popped open their little beaks when I did a little "pishing". 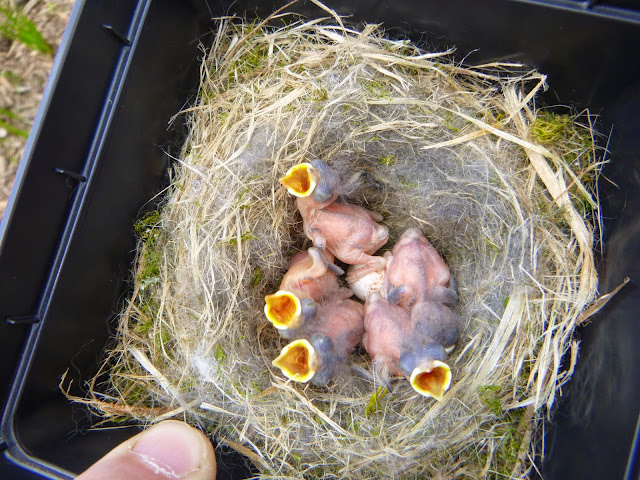 The Eastern Bluebird eggs in Lab Box #5 still have not hatched.  I am concerned that this nest has failed for some unknown reason.  I plan to contact a friend at the NC Museum of Natural Sciences about how to proceed.  Most likely, I will remove the entire nest and replace it with a new nesting container in the hopes that this pair will try again.  I may open one of the eggs to see if there is any evidence that the eggs were ever fertile. 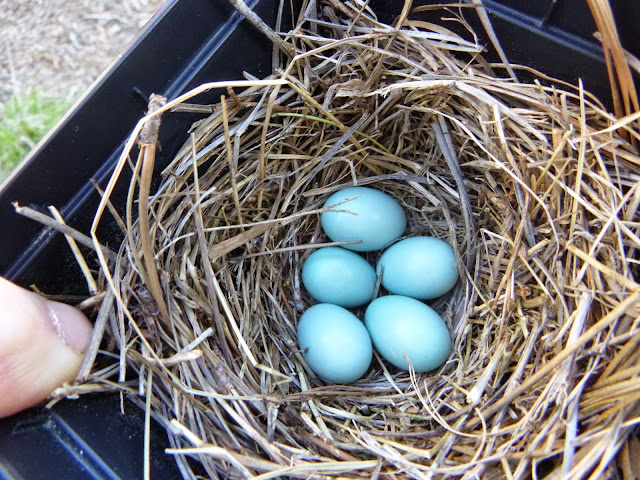 The Carolina Chickadees in Lab Box #6 near the loading dock hatched on May 3rd. All five babies are active and responded to my "pishing".  I like the green fibrous stuff that a parent bird added to the nest cup. 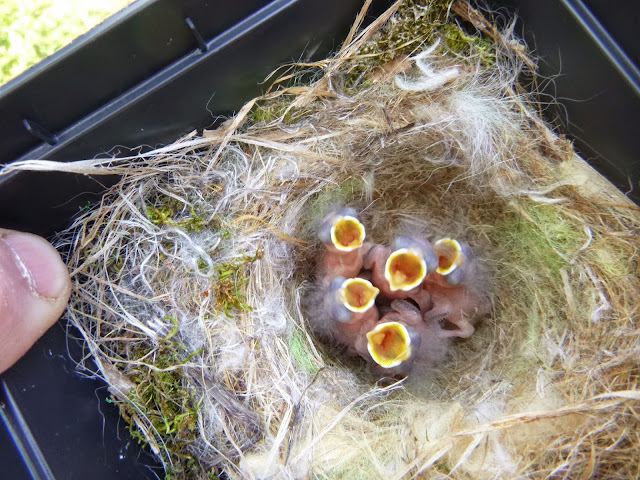 Much to my surprise Lab Box #7, which has been empty for the past two seasons, suddenly has a complete nest in it. The nest cup was covered over, but I gently laid the camouflage back and was able to observe two speckled eggs. 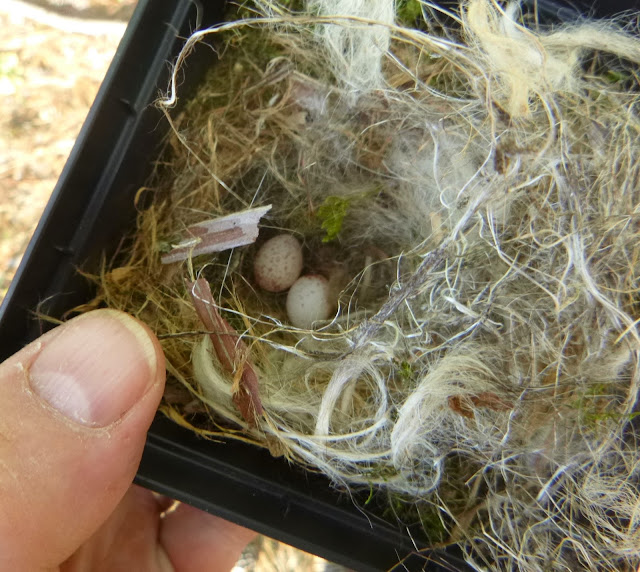 I'm not sure yet what is nesting here, but I'd guess another chickadee nest or perhaps a Tufted Titmouse.  I'll keep an eye out as this is an easy box to check on my way home in the afternoons. 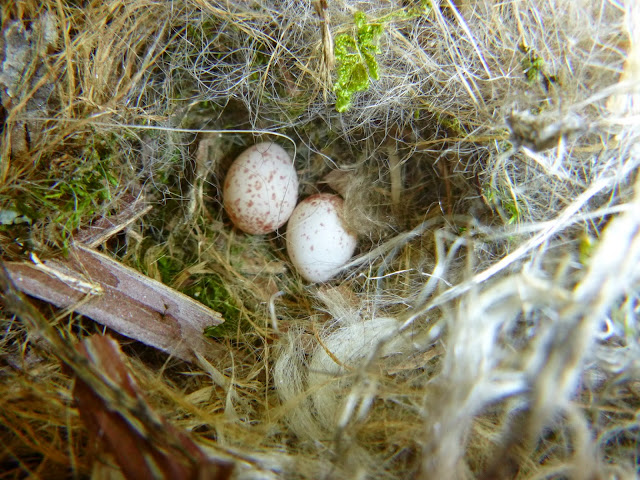 Posted by From Bluebirds to Turtles at 8:41 PM