NEST BOX CHECK - MAY 8TH AND A BOLD JUMPER!

I made the rounds to the active nests on Friday afternoon. Here is what was going on.

In Lab Box #1 the Brown-headed Nuthatches have a total of six eggs that are white with reddish brown splotches especially concentrated around the large end of the egg. They should be hatching in around a week. 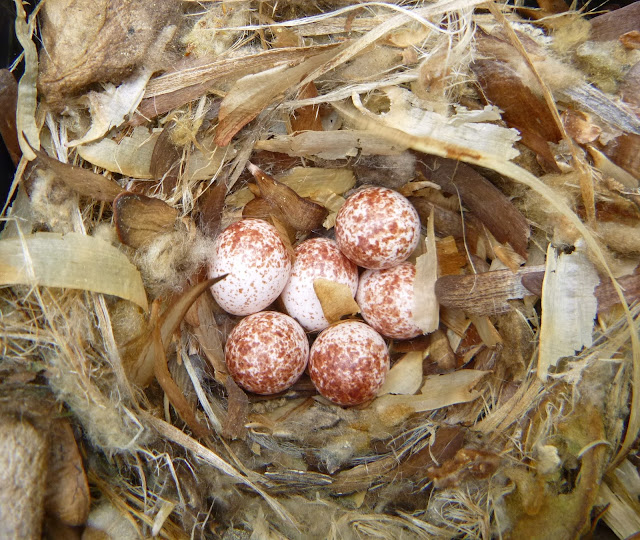 In Lab Box #2 the three Eastern Bluebird nestlings are fully feathered and getting big.  They should be fledging in the next two or three days.  The plastic nesting cup has a lot of what appears to be fecal debris around the edges.  I have not seen this before. 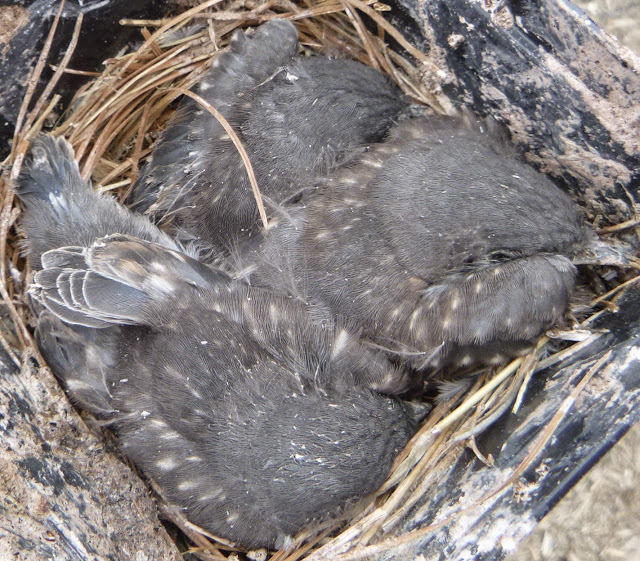 In Lab Box #4 there appears to be a chickadee pie, divided into 5 wedges!  These little Carolina Chickadees have about ten days to go before leaving the nest. 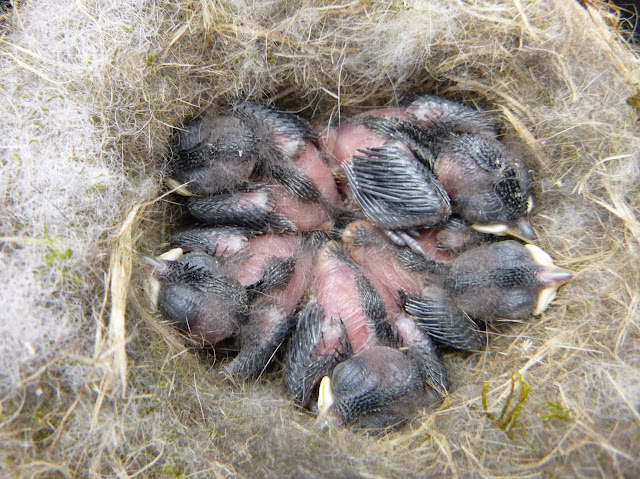 In Lab Box #5 I found the five eggs still unhatched eight days past the usual incubation period.  I had noticed some change in the coloration of the eggs a few days ago that was similar to a nest last year where the parent birds seemed to have disappeared during incubation.  On advice from a bird researcher at the NC Museum of Natural Sciences, I removed the nest, cleaned out the nest box, and replaced the old plastic nesting cup with a new one on the chance that the bluebird pair will begin a new nest.  At the museum staff's request, I delivered the nest cup with the nest and four of the eggs to the lab facilities at Prairie Ridge EcoStation for potential examination by a new researcher who specializes in bird eggs. 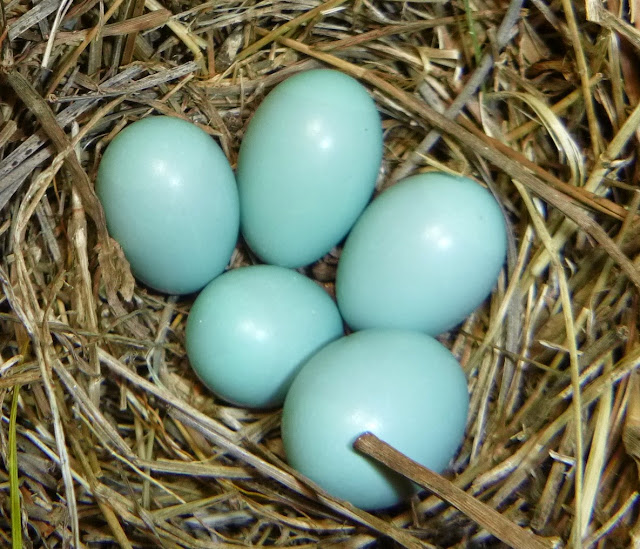 I took one of the eggs to my lab for a close up photo.  You can see the demarcation line that corresponds to the air cell at the large end of the egg.  The area of the shell over the air cell is more like the original shell color.  The rest of the egg is a shade or two darker.  I opened the egg from the large end and could see a network of blood vessels just beneath the membrane.  When I further opened the shell I found a lifeless embryo that was developed enough to identify its eyes, beak, and very tiny legs and wings.   It is hard to know what caused the end of the development of these eggs, although we did have temperatures in the upper thirties at least twice during the first week after incubation would have commenced. 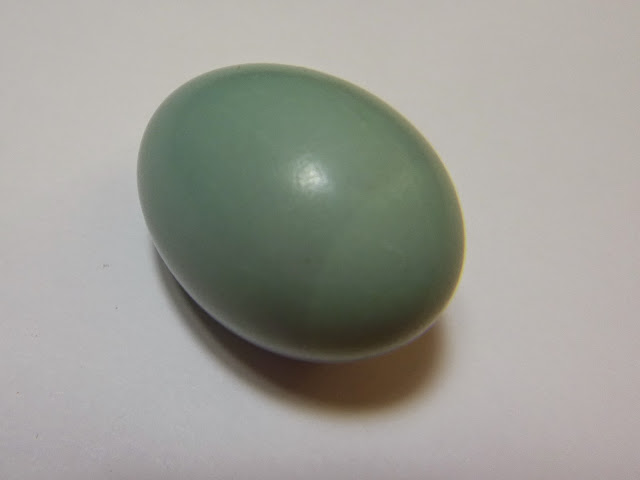 In Lab Box #6 the Carolina Chickadee young are thriving. Two of the five immediately popped their beaks open hoping for insect meal.  The fledge date for this clutch is in about a week.  You can see the eyes beginning to open on these little birds. 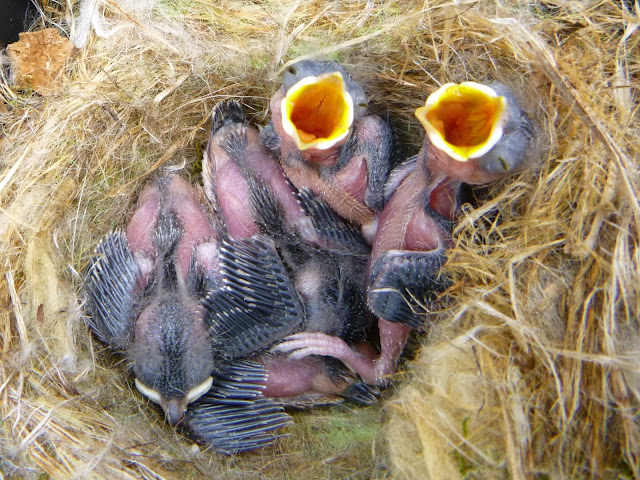 In Lab Box #7 our unknown bird (chickadee or titmouse, I think) has five eggs. Perhaps in ten days these eggs will have hatched and I'll see the parent birds flying to and from the box with food items. 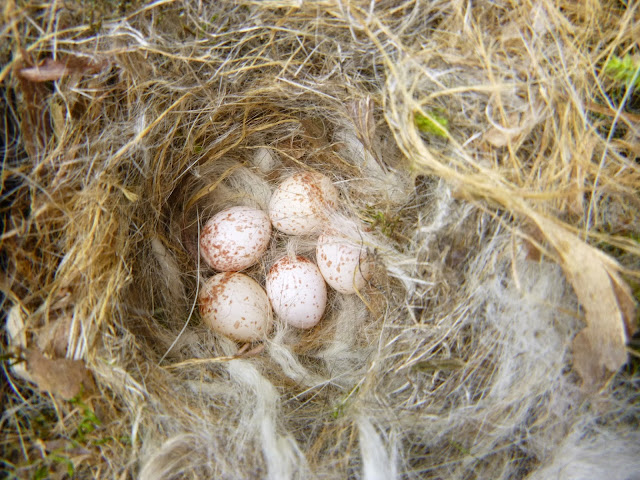 On Thursday I found a black jumping spider on a wall in the hallway that separates our Cytology Prep Lab from the Chief Medical Examiner's Toxicology Lab.  I scooped the spider up in a plastic lab bottle with lid and released it today while I was out checking nest boxes.  I placed it on a facility structure about 4 feet off the ground.  It immediately leaped to the ground, but I was able to get a few blurry pictures plus this decent one.  At home Friday evening, I zoomed in on this photo to admire the typical "sports car-like headlights" that all jumping spiders have for eyes.  But I was astonished by the metallic green jaws (chelicerae) between its pedipalps.  The pedipalps appear to be slightly "clubbed" at the ends.  If so, this would be a male spider.  I am seeking conformation on the gender.  But I did learn through Bugguide.net that this is a Bold Jumping Spider (AKA Daring Jumping Spider) with the scientific name Phidippus audax.  The big forward facing eyes are instrumental in their hunt for insect prey and also in the dances that this group of spiders employ in seeking a partner.  These spiders are not prone to biting humans and should be a source of interest not fear.  A new acquaintance on Facebook who is a retired park ranger wrote me that placing a mirror in front of a male jumping spider can produce an entertaining show.  The male jumping spider often puts on a display in an effort to scare away what he thinks is another spider of his species. 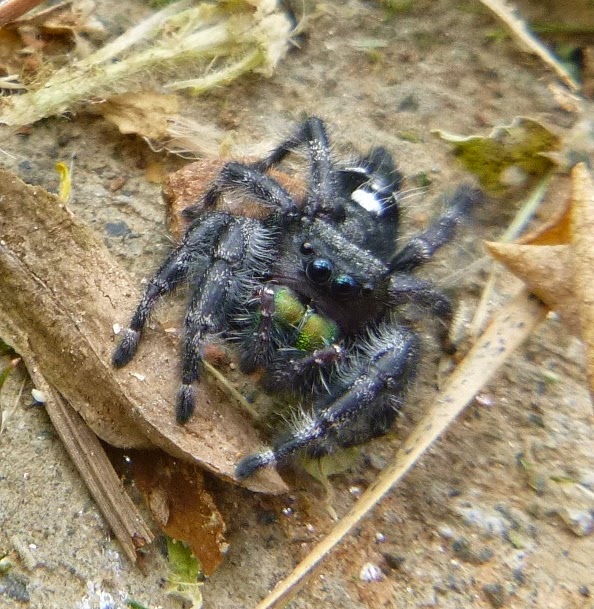 In Home Box #1 there are five well feathered Eastern Bluebird nestlings.  You can see a little bit of blue in the wing feathers of the bird on the left (could be a male). They should be ready to fly by midweek. 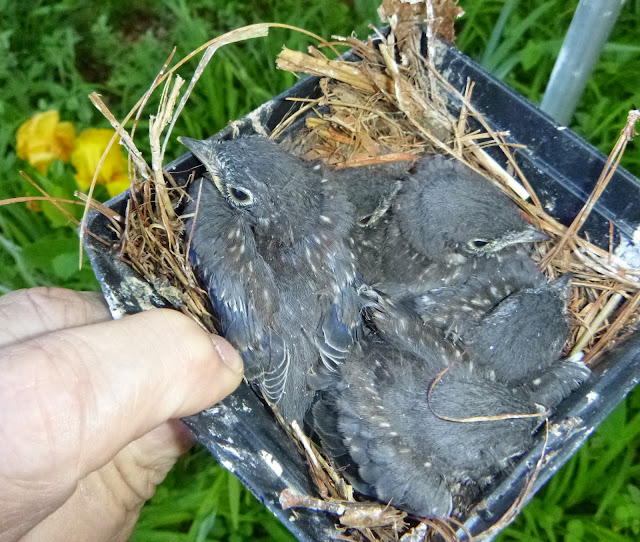 In Home Box #2, the Brown-headed Nuthatch babies are getting their "shark-tooth" shaped beaks!  If you look closely, you can count all six nestlings.  It will probably be near the middle of the month before these birds take flight 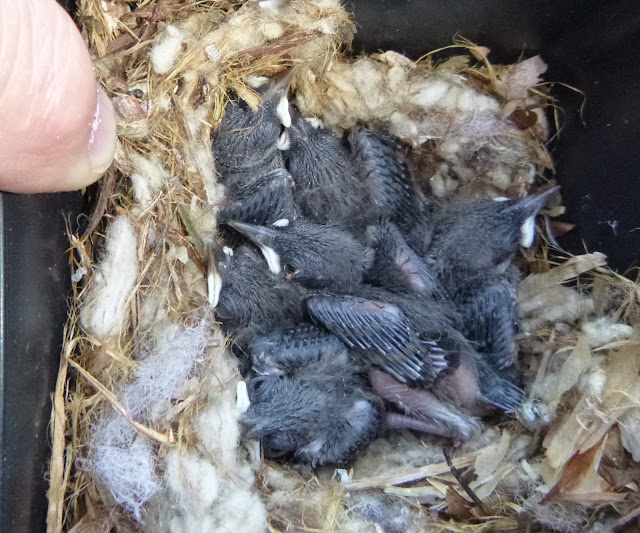 In Home Box #5 the Tufted Titmouse nestlings are definitely hungry.  Here you can see five of the six mouths wide open. 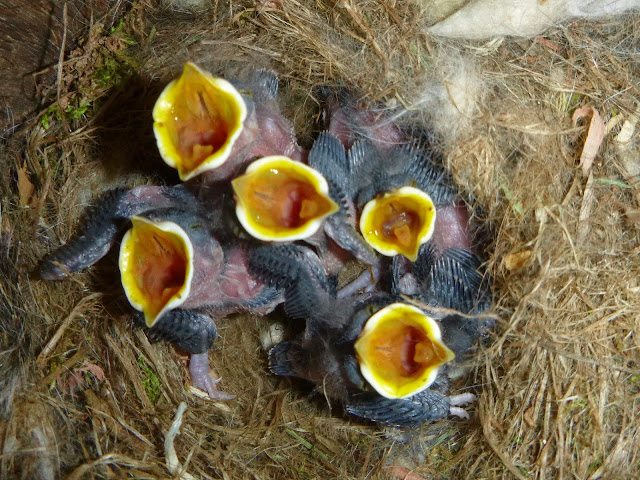 When I opened the box, one of the nestlings was away from the other five in this very spacious nest box that was intended for Great Crested Flycatchers.  Before I moved the little titmouse back closer to its siblings, I just had to hold its warm little body in my hand for a few seconds.  It had no problem begging for food from this big old fuzzy fellow.  Sorry, I've got no mealworms on me at the moment! 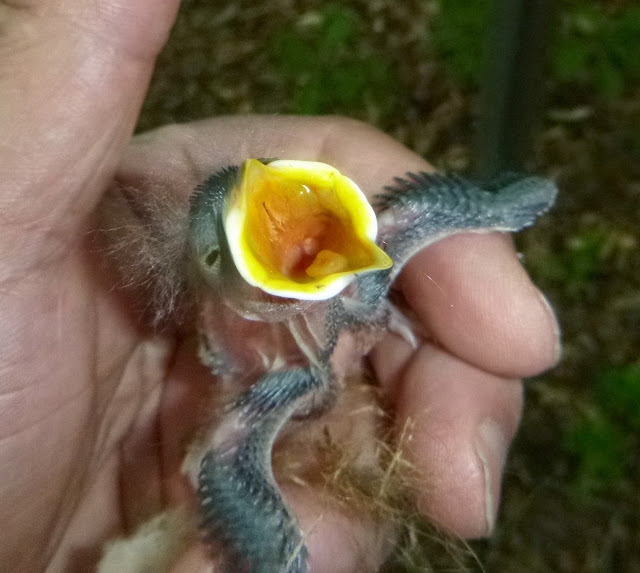 Saturday morning I put out some mealworms in the terracotta saucer on the deck railing.  The Tufted Titmice were the first to arrive!

In Home Box #6 the four Eastern Bluebird nestlings have plenty of feathers  They are just a a few days behind the nestlings in Home Box #1.  These babies seem have experienced parents.  They both dive bomb me whenever I check the nest. Neither of them are reluctant to grab mealworms from a clay saucer on the deck rail even when I'm nearby. 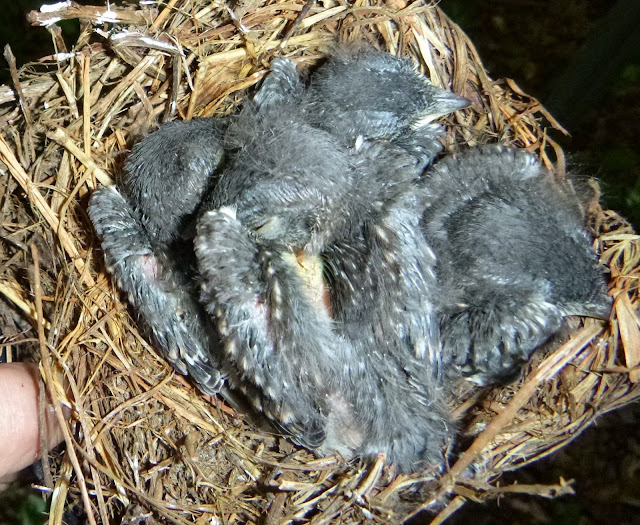 I hope to have more pictures next weekend!

Posted by From Bluebirds to Turtles at 2:06 PM