This has been a busy week in the nest boxes at home and at the lab.  A total of 12 young Eastern Bluebirds successfully flew out of their dark and protective nest boxes into a big bright new world.  Here is the recap.

I checked on the nest in Lab Box #1 twice this week and found either the mother on the nest or one of the adults calling from the tall Loblolly pines nearby.  I am hoping to find hatchlings when I monitor the nest box on Monday (May 18th). 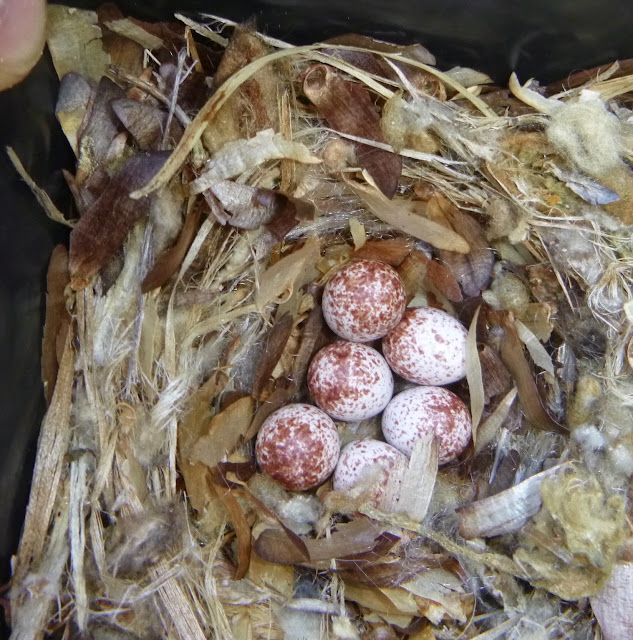 Lab Box #2 had an eventful day on May 12th.  When I removed the plastic nesting cup from the box about 10 a.m. to check the 19 day old nestlings (16 to 21 days is typical age for fledging), one of the three young birds looked up at me and immediately flew strongly straight out from the nest and curved slightly to the left down the hill about 200 feet before landing in a 20 foot maple tree, one of a few young trees that line the drive leading to the lab parking lots.  Within just a few seconds one of its nest mates took off and followed almost an identical flight path. Not long later I could hear the parent birds calling to these first two fliers. The third young bluebird spent a minute or two tucking its head into the bottom of the nest in an effort to hide.  Here you can see the last nestling peeking at me with one of the two eggs from the clutch that did not hatch.  I placed the nesting cup back in the box and checked the box again that evening to find that the third young bluebird had fledged as well. These were my first three fledgling birds of 2015.  I removed the old nesting cup, washed out the inside of the nest box itself, and placed a fresh nesting cup inside in the event this bluebird pair decides to nest again this summer.  Later in the afternoon I opened the unhatched eggs and found nothing but yolk in one egg and just the tiniest amount of tissue in the other. 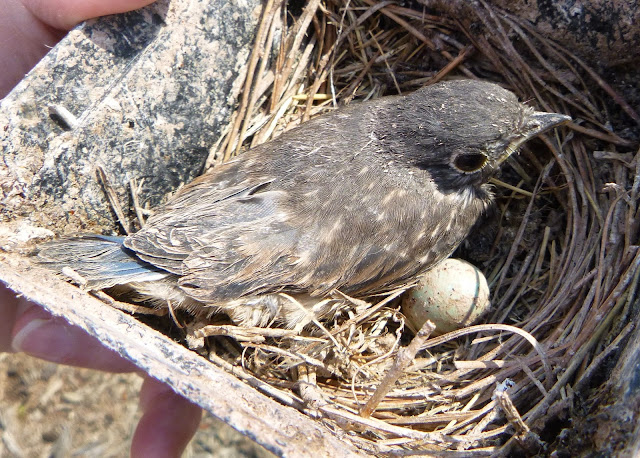 The Carolina Chickadees in Lab Box #4 have developed their characteristic black cap.  The five of them seem to be keeping the same arrangement in the nest as they did last week, looking a bit like wedges of pie.  Notice the feathers expanding from their feather sheaths on the nestling nearest my fingers.  They look rather like makeup brushes that I've seen in my wife's makeup kit.  This visit was on May 13th. 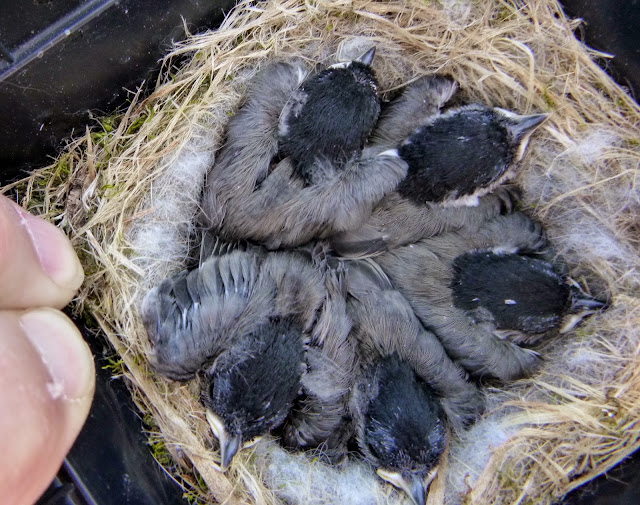 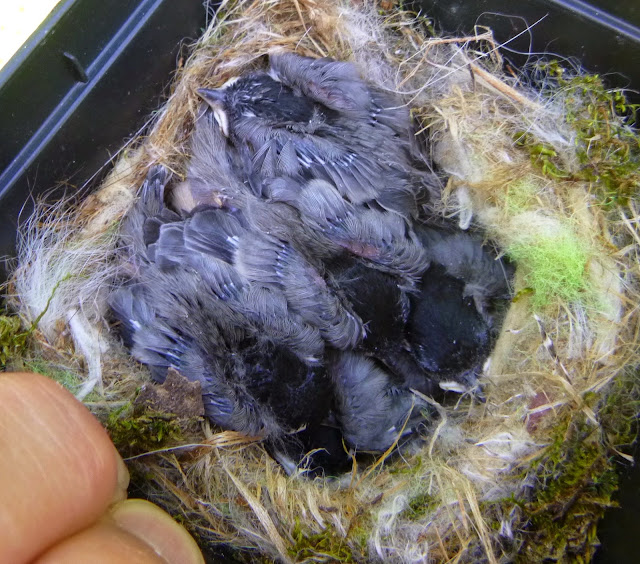 The most recent nest at the lab also belongs to a pair of Carolina Chickadees and is located in Lab Box #7. On May 13th there were still five eggs being incubated.  This box is at the end of a section of parking lot near the lab and may offer a chance for me to share a view of the little chickadees to a few lab mates late next week. 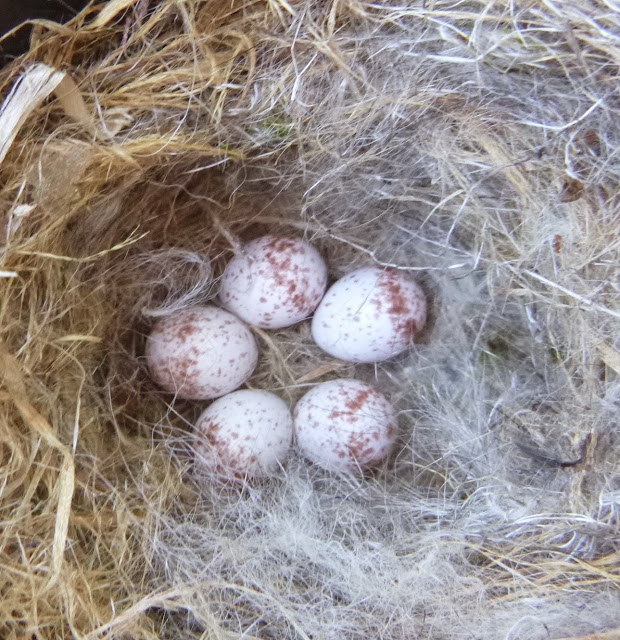 I checked on the Eastern Bluebirds in Home Box #1 on the morning of May 12th before heading to work.  All five young 18 day old birds looked healthy and fully feathered.  That evening, I put several live mealworms in the driveway and sat in my car hoping to get a few photos of parent birds taking food to their young charges. After sitting for a while and not seeing any activity, I got out of the car and checked the nest box.  It was EMPTY!!!  So these were bluebirds 4, 5, 6, 7, and 8 to fledge on this day! 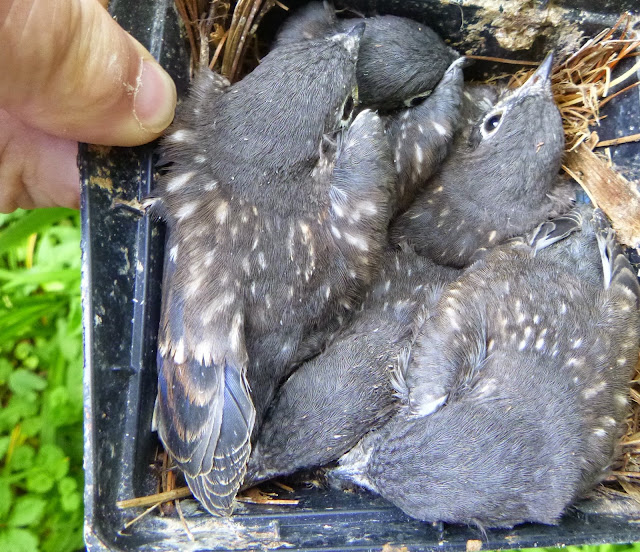 In Home Box #2 the little 15 day old Brown-Headed Nuthatches are fully feathered on May 12th.  The characteristic white patch on the nape of their necks is quite evident. 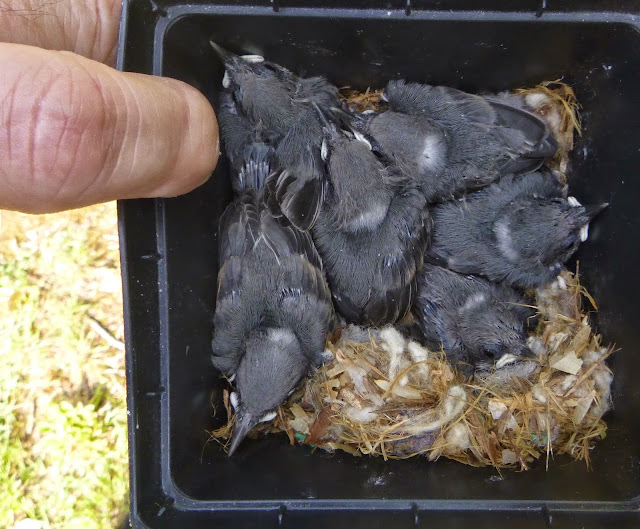 I lifted one of the young nuthatches out of the nest for a closeup photo. It promptly made a deposit!  Its dagger-like beak will be put to good use in just a week or two as these tiny birds are fond of fishing out insects from behind bark as well as splitting open sunflower and safflower seeds.  I read somewhere recently that some nuthatches have been seen using a piece of bark to wedge behind the bark of trees to expose deeper insect hiding places.

(link to stanford.edu info on Tool-Using) 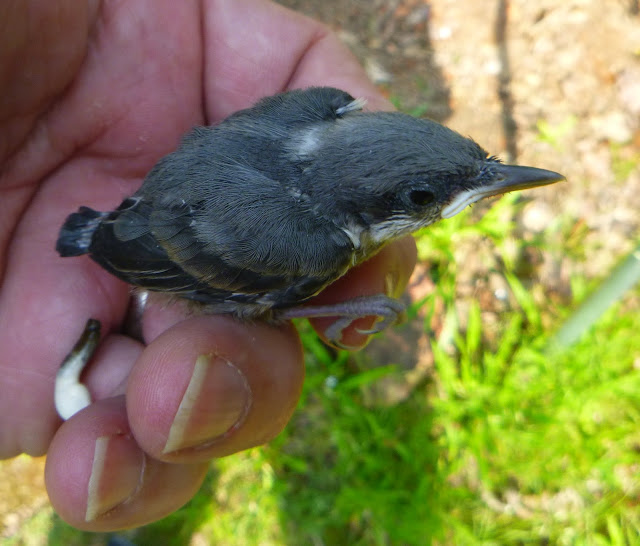 On May 13th the elevated Home Box #5 still holds six little Tufted Titmice.  They are feathering out nicely and I've enjoyed watching from the window as both parent birds busily carry food to their young. 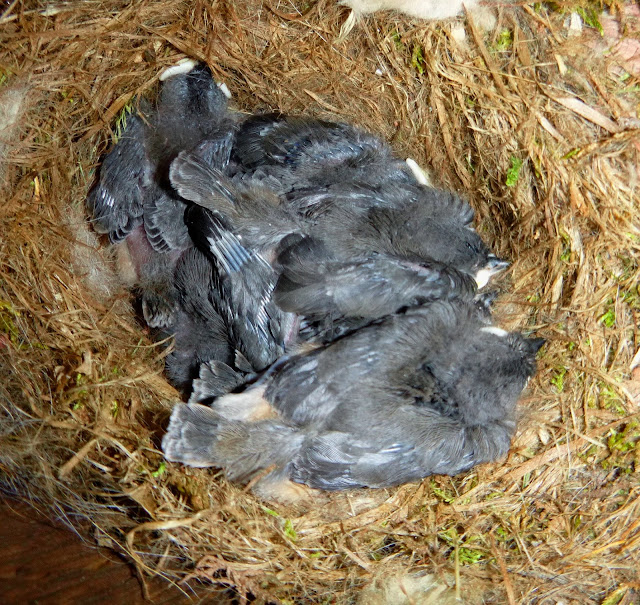 I checked in on Home Box #6 on daily from May 13th (photo) through May 15th. The father bird nearly brushed my shoulder on one dive bombing run.  Early in the morning of May 15th these four nestlings became Bluebirds 9, 10, 11, and 12 to fledge from the nest boxes I've been monitoring. 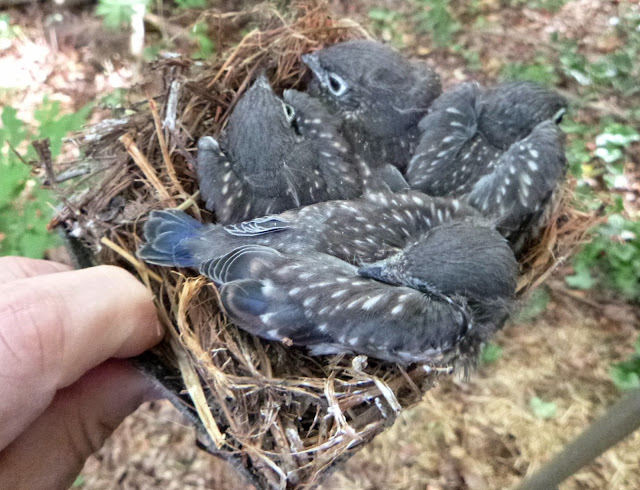 In the late afternoon of May 12th as I began to ready the Moth Pit for luring in various nighttime visitors in the next week or so, I stumbled upon a mass of wheat straw, grasses, small twigs and thin pieces of plant roots in the bottom of a nearly empty light blue Rubbermaid trash can.  Upon closer inspection, I found four whitish eggs speckled with tiny flecks of reddish brown.  This is the nest of a Carolina Wren, but was it active?  I waited until after 9 p.m. and slipped out to take a peek.  I could no longer see the eggs, but could barely make out the beak of the mother wren.  The wrens are such a resourceful bunch!  The next evening there was a fifth egg and the mother bird seems to have set about incubating. 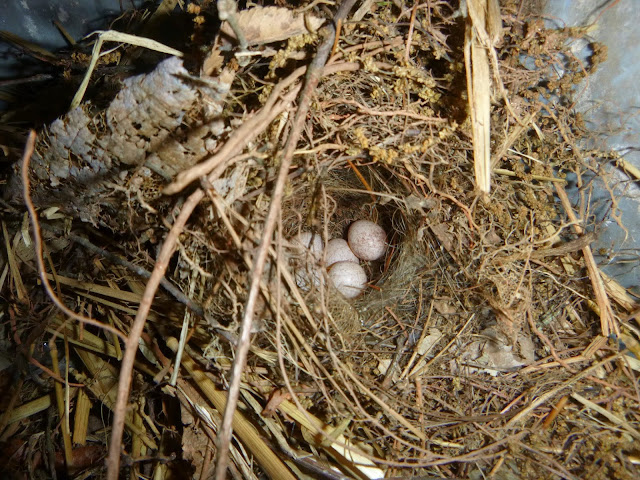 Posted by From Bluebirds to Turtles at 12:13 AM