This afternoon my sister Sally, who was in town visiting her son's family, sent me a text saying they had found seven little snakes under stones that serve as a perimeter around a flower bed and a small tree in Matt and Beth's front yard.  It didn't take long for me to get on the road headed that way.

The stones had been replaced after the slender reptiles had slithered out of sight. As the stones were lifted again, we found three of the snakes.  I was delighted to hold my first snakes of 2015.  It was hard to get all three heads in focus at the same time, but here are two in the photo below. 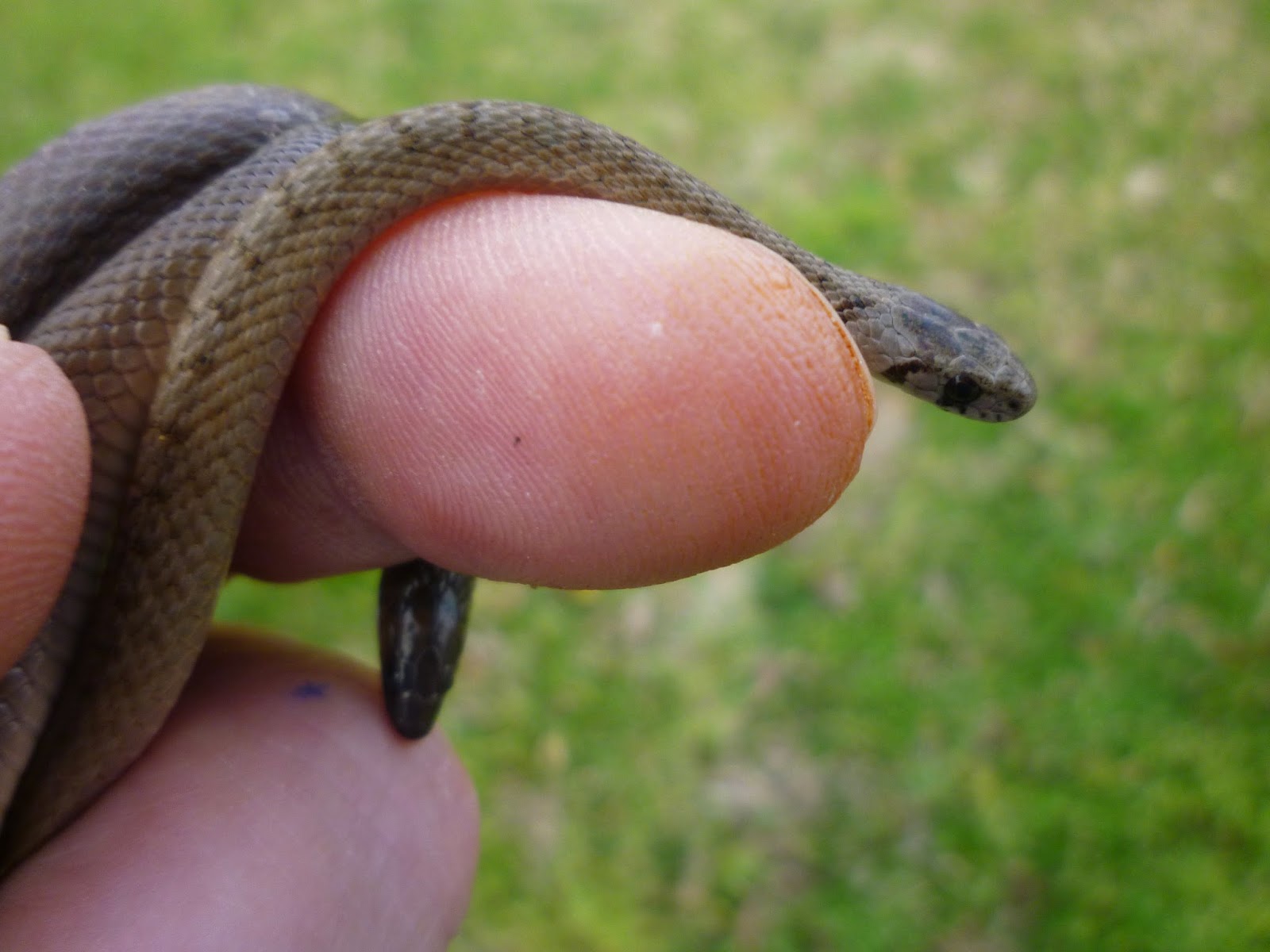 It was soon apparent that we had two species of snakes here.  They were a little squirmy, but the cool weather tamed them a bit.  The slimmer snake on the right is a fairly young Dekay's Brown Snake (Storeria dekayi), maybe a year or two old.  The paired small dark spots along the back are a common characteristic of this species. These spots are sometimes connected.  Another diagnostic feature is the dark crescent marking near the back of the head.  These snakes eat soft-bodied insects and worms. In searching for food they actually help aerate the soil and even add a little fertilizer with their waste.  They are healthy for your garden! 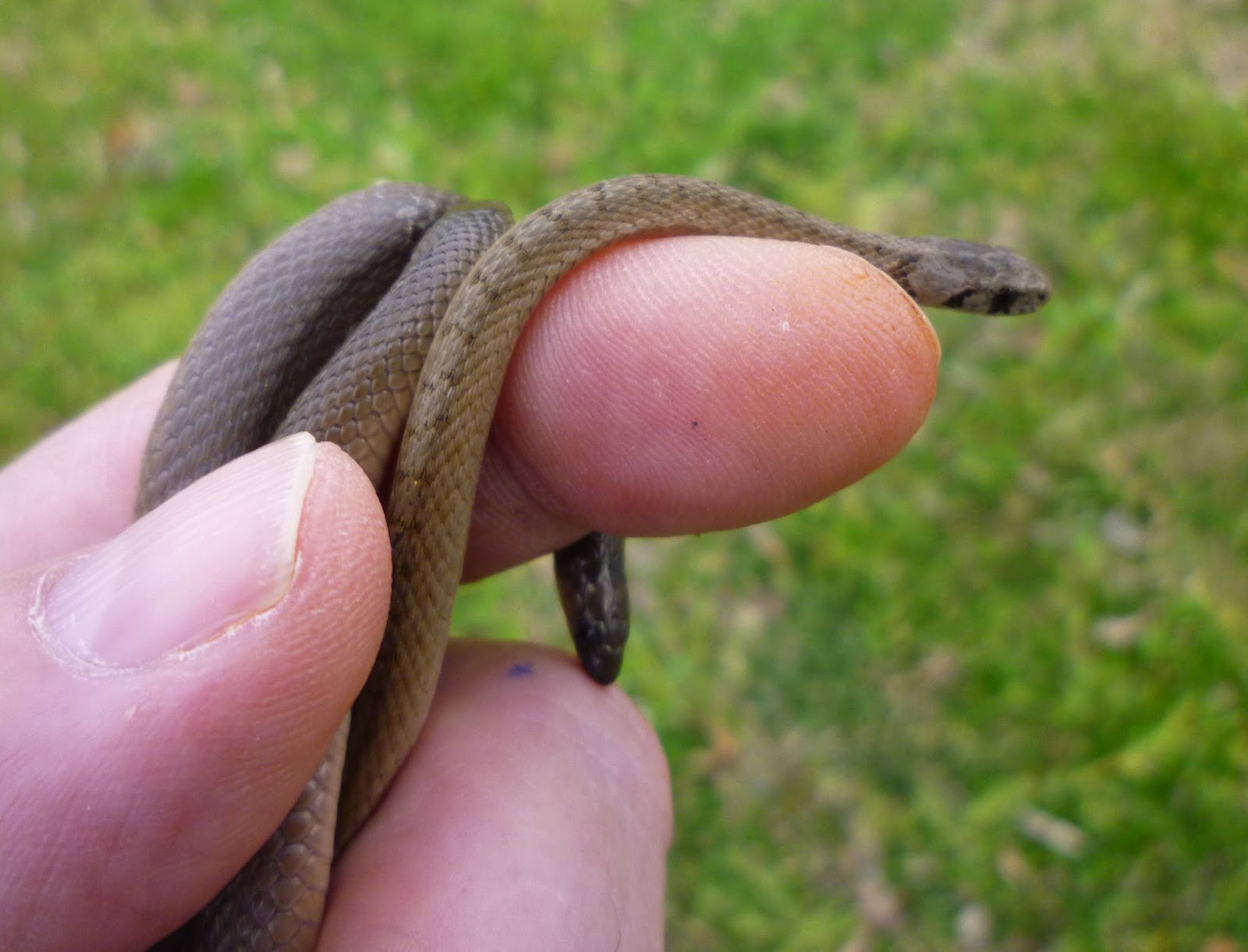 Here you can see the slight connection between some of the paired spots on the Dekay's Brown Snake as well as the crescent marking along its jaw-line.  The other two snakes are Rough Earth Snakes (Virginia striatula).  They seemed to be very mature snakes at about 12" long and a bit heavier bodied than the brown snake. The Rough Earth Snakes have a uniform brownish gray body with a creamy colored belly.  Their scales are keeled (having a ridge in the center of each scale) which gives them a bit of a "rough" texture when held.  Earth snakes share the same diet with the brown snakes and are good for your garden.  Both species are fossorial in that they prefer to stay hidden under rocks, logs, leaf litter, etc. 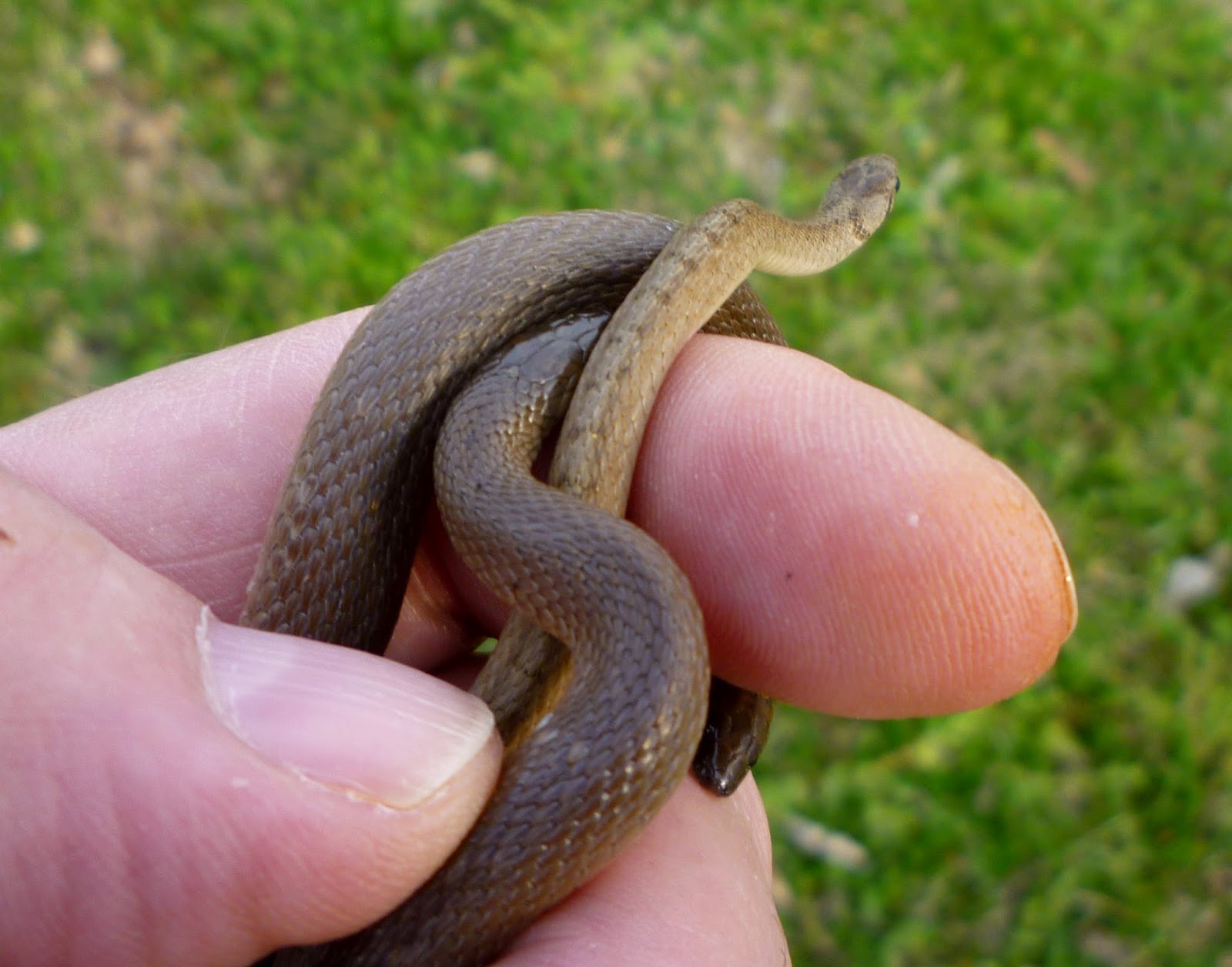 The Dekay's Brown Snake has a bit more of a "neck" that separates its head from the rest of its body.  It has dark markings on top of its head and also has keeled scales. 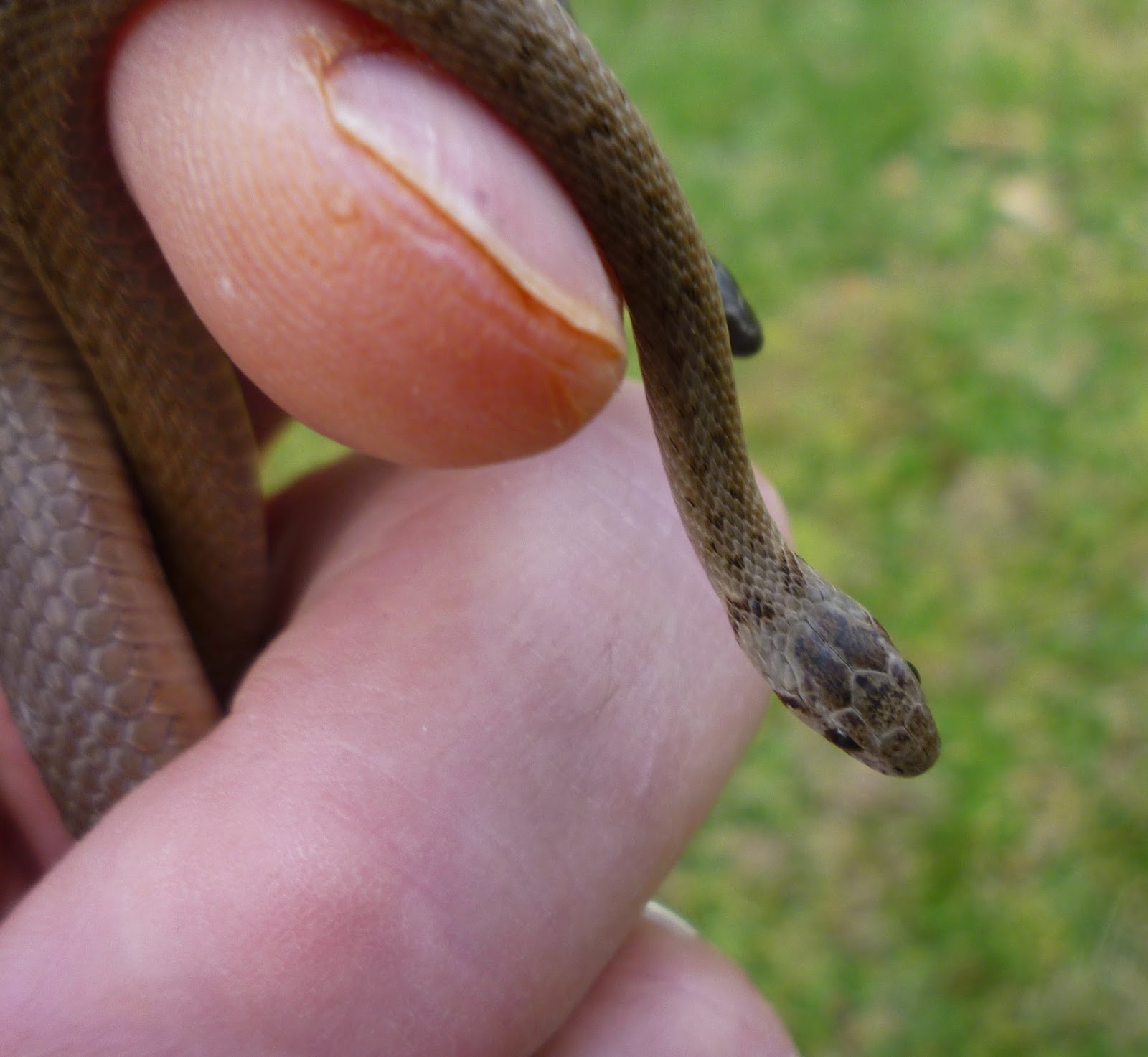 Both of the Earth Snakes had a number of small pick-like wounds along their bodies.  It made me wonder if a cat had "played" with them over the years.  Notice the more pointed nose of the earth snake (below) in comparison the the rounded nose of the brown snake (above).  The Rough Earth Snake has a very thick neck or no neck at all!  Both of these snake species get no longer than 12 to 13 inches and are perfectly harmless. They do not grow up to be copperheads or pythons!  They are perfect reptile creatures for introducing to your children or grandchildren. 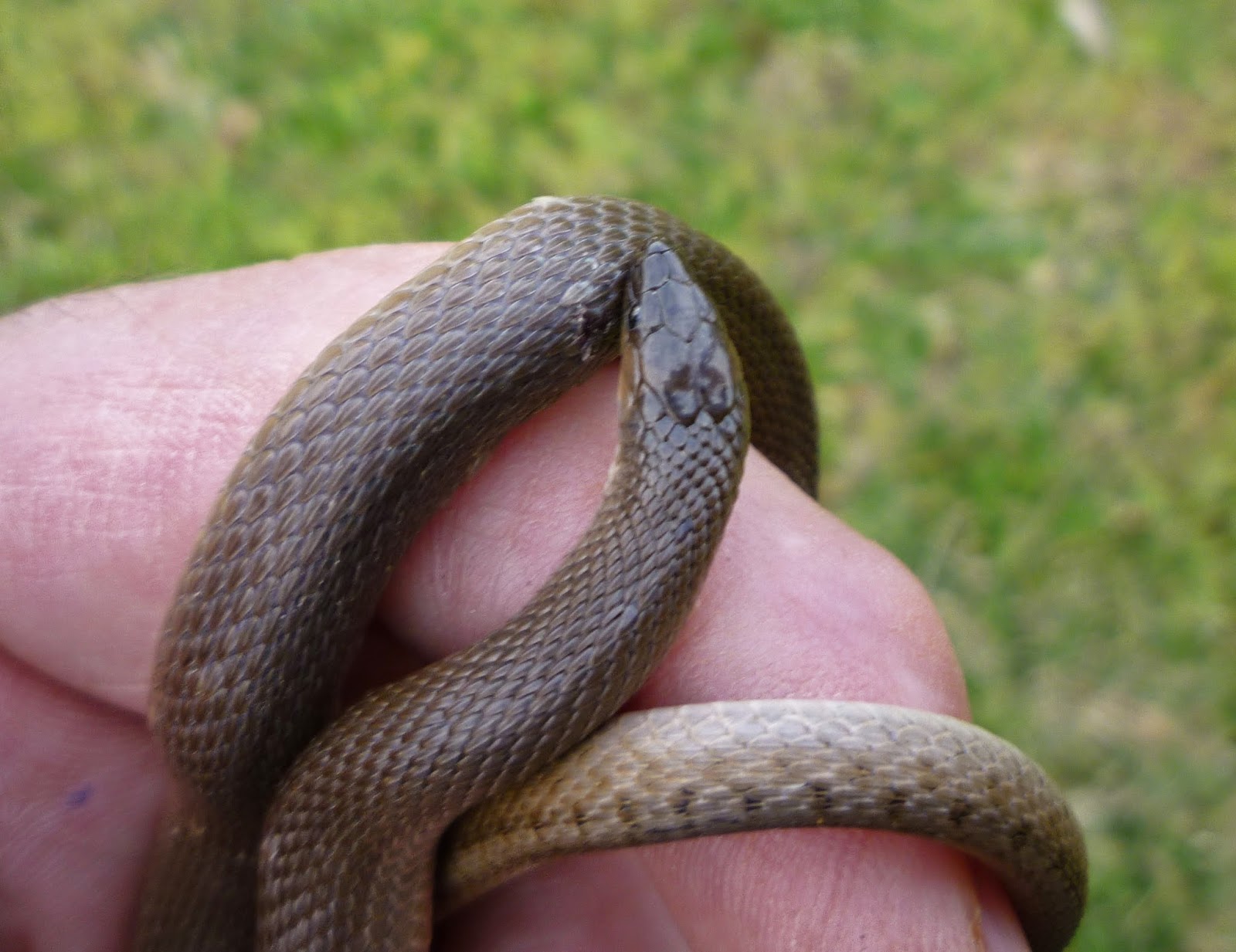 Posted by From Bluebirds to Turtles at 10:05 PM