Two of our favorite birds have been at the feeders most of the winter.  This bird is a male Pine Warbler.  He will get more yellow as Spring matures.  Pine Warblers live in our area year round and can often be heard trilling away in the tops of tall pine trees. 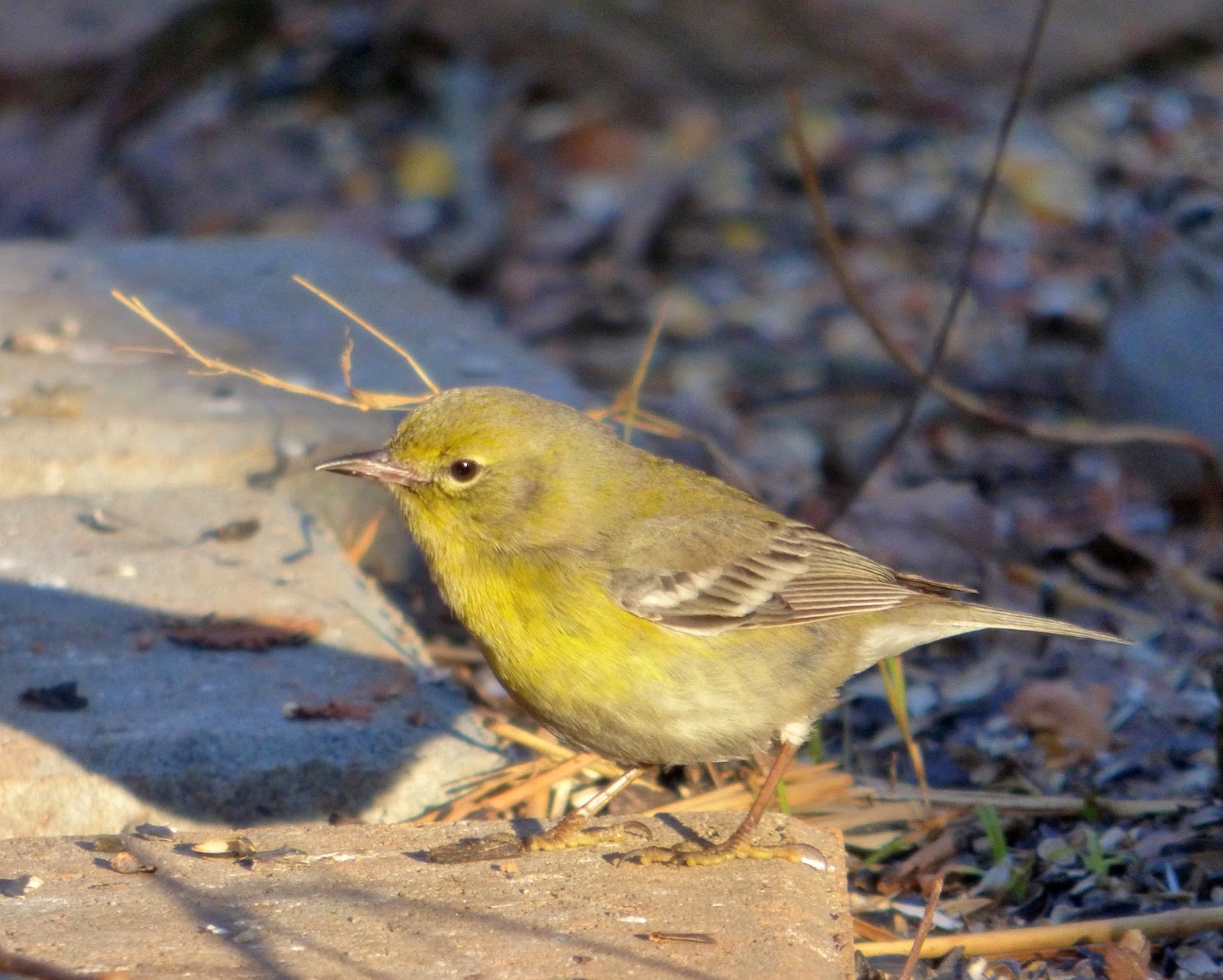 Pine Warblers seem to be quite tolerant of humans near the feeders.  They are curious and inquisitive.  I find that they will stay at the feeder while other species vanish at the sight of a human nearby. 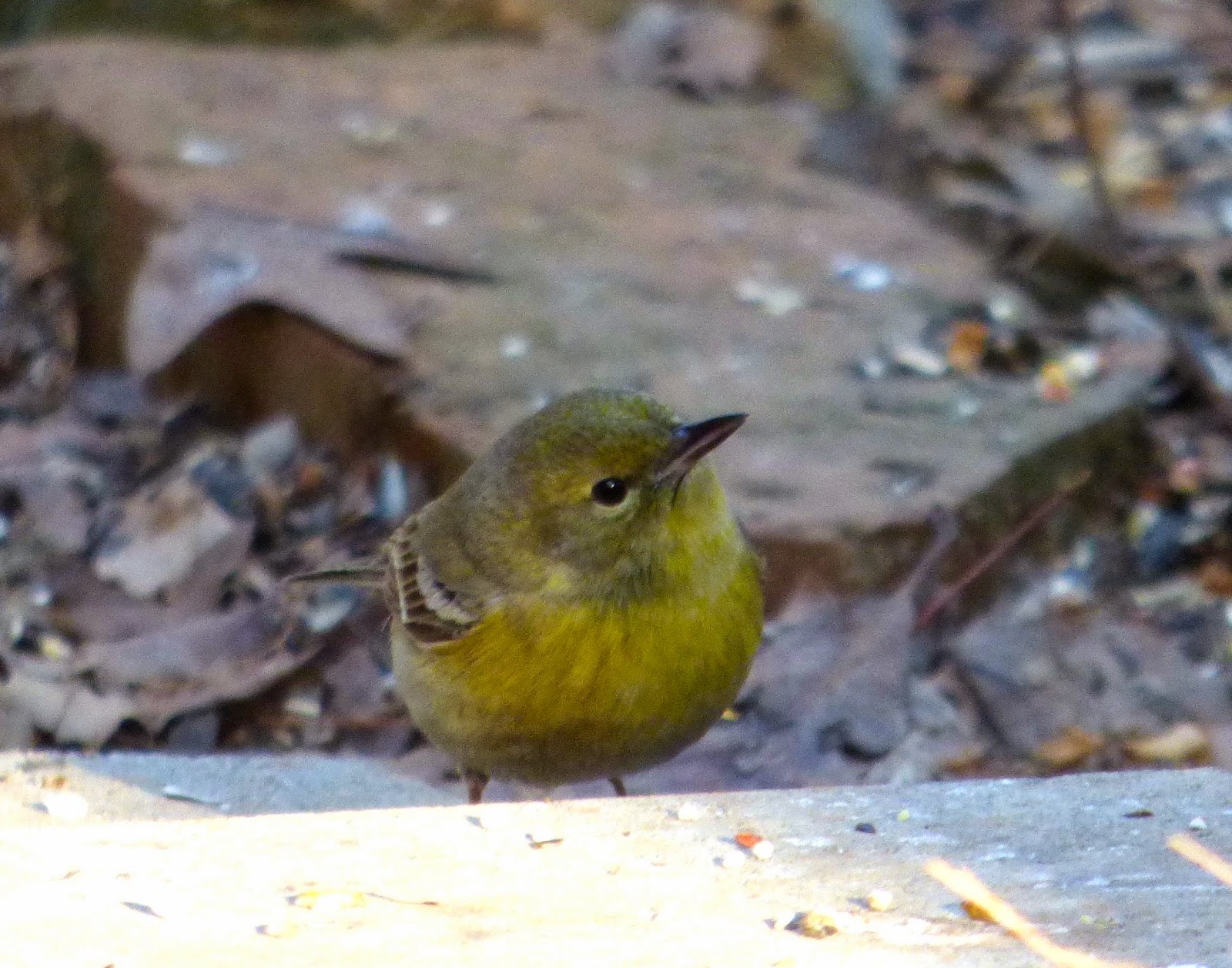 The pair of white wing bars is a characteristic of Pine Warblers though their coloration can be somewhat variable in different seasons, ages, and genders.  A light eye-ring is another feature of this warbler.

(link to: The Many Faces of the Pine Warbler) 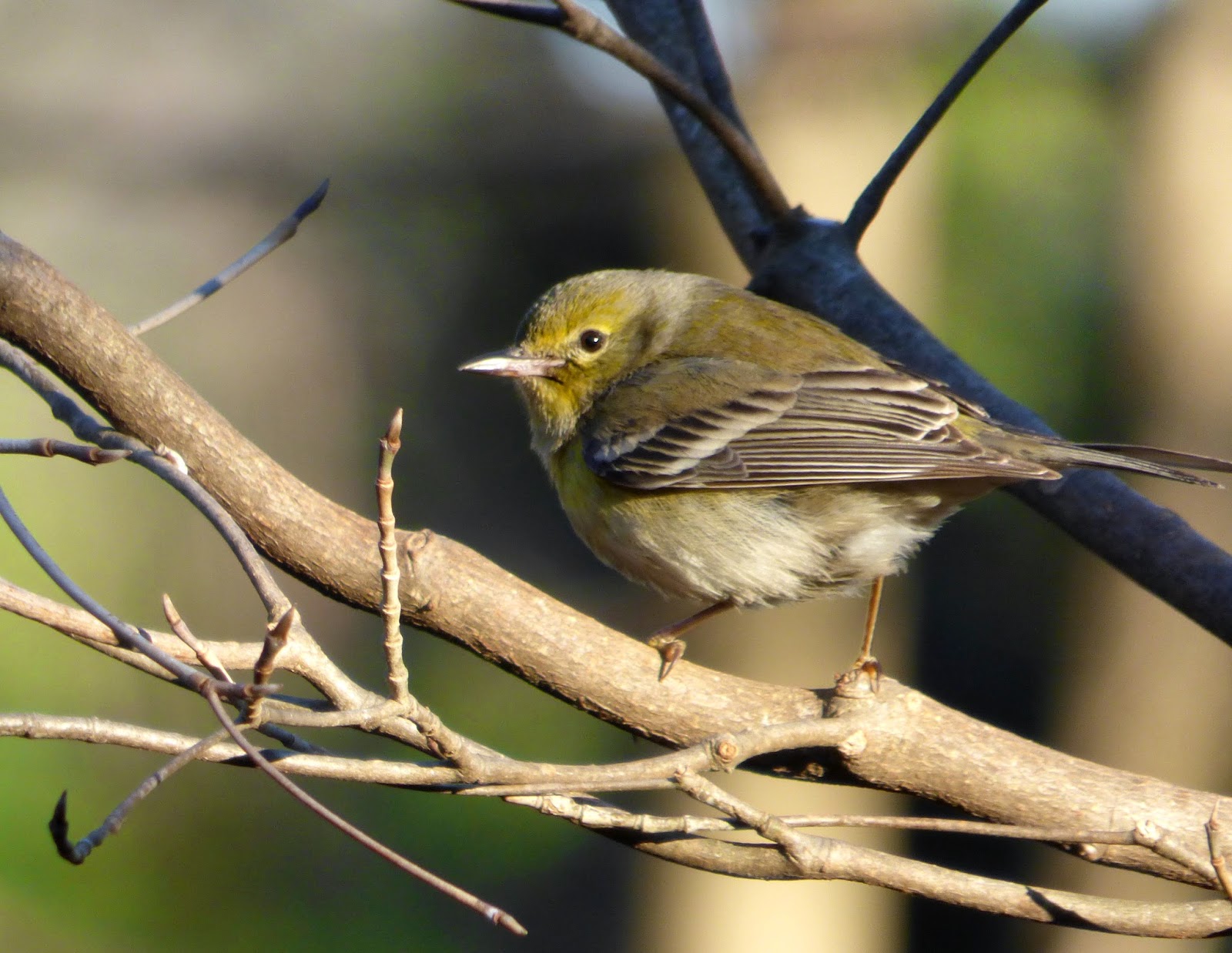 Another favorite visitor, is the diminutive Canadian visitor, the Ruby-crowned Kinglet.  It flits and fidgets around the feeders from time to time and then is gone for a while.  I have rarely seen more than one of these kinglets at a time.  They are smaller than the Chickadees and have two white wing-bars like the Pine Warblers. They have a prominent eye-ring that makes their eye look bigger than it really is. 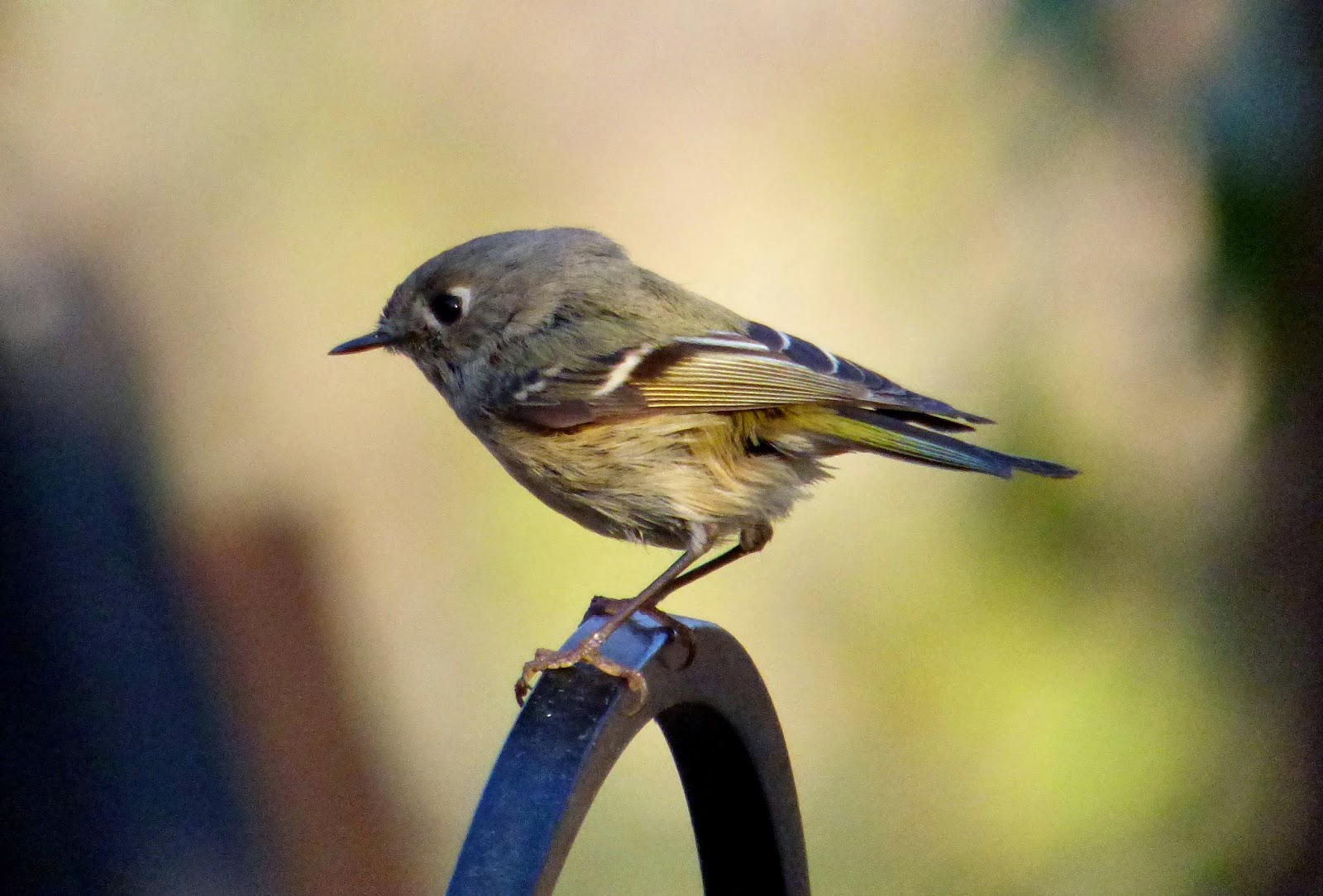 It turns out that this kinglet is a male.  On the top of its head you can see a tiny streak of red feather.  The males often keep these feathers concealed. In times of stress and during breeding season, the male kinglets flare these feathers into full view.  It is quite impressive.  There is also some yellow in both the primary wing feathers and along the edges of the tail feathers.  This kinglet is perched at a suet feeder, but I've often seen them grab smidgens of suet without alighting. They are also inquisitive birds and seem unconcerned when I am sitting nearby. 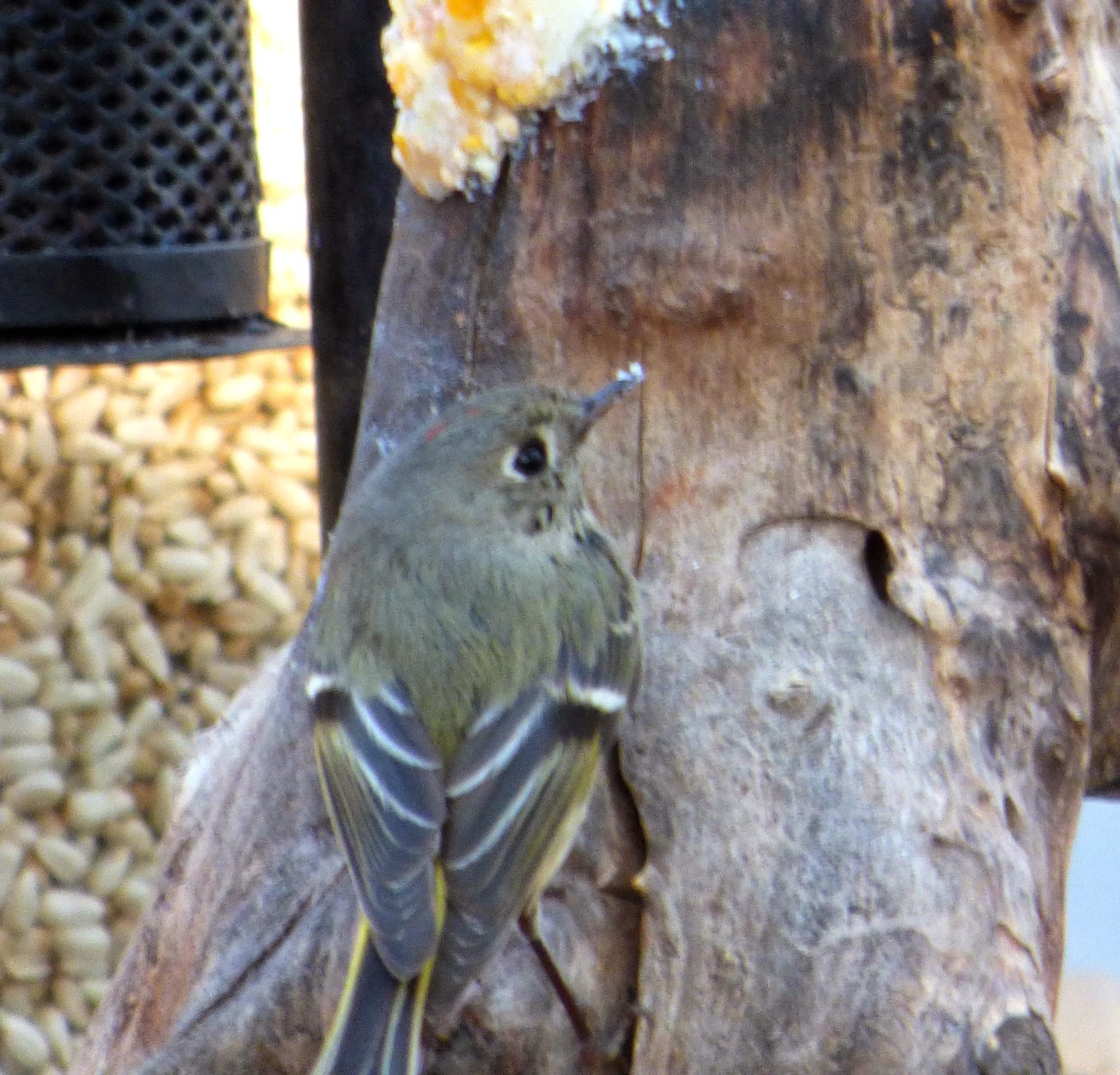 Posted by From Bluebirds to Turtles at 10:59 PM