A BUSY NIGHT AT THE CAMERA TRAP

After capturing deer on the little trail camera twice over the first 10 days, I decided to invest in a product called a deer block.   This is a 25 pound cube of nutritional supplement that includes protein, milo, corn, soybeans, cottonseed meal and molasses.  I placed the block in the backyard on an inverted galvanized tub to get it up off the ground.  The deer block is just out of the pictures on the left-hand side.

The next morning the following parade unfolded as I checked the pictures on the trail camera SD card.

Up first image was of a neighborhood gray mackerel tabby cat (Felis catus).  I'm guessing that the deer block has some aroma emanating from it that attracted the attention of this evening roaming feline.  Wiki says that mackerel tabbies have an "M-shaped" mark on their foreheads.  I also learned that "tabby" is a color pattern that is found in a wide variety of cat breeds. 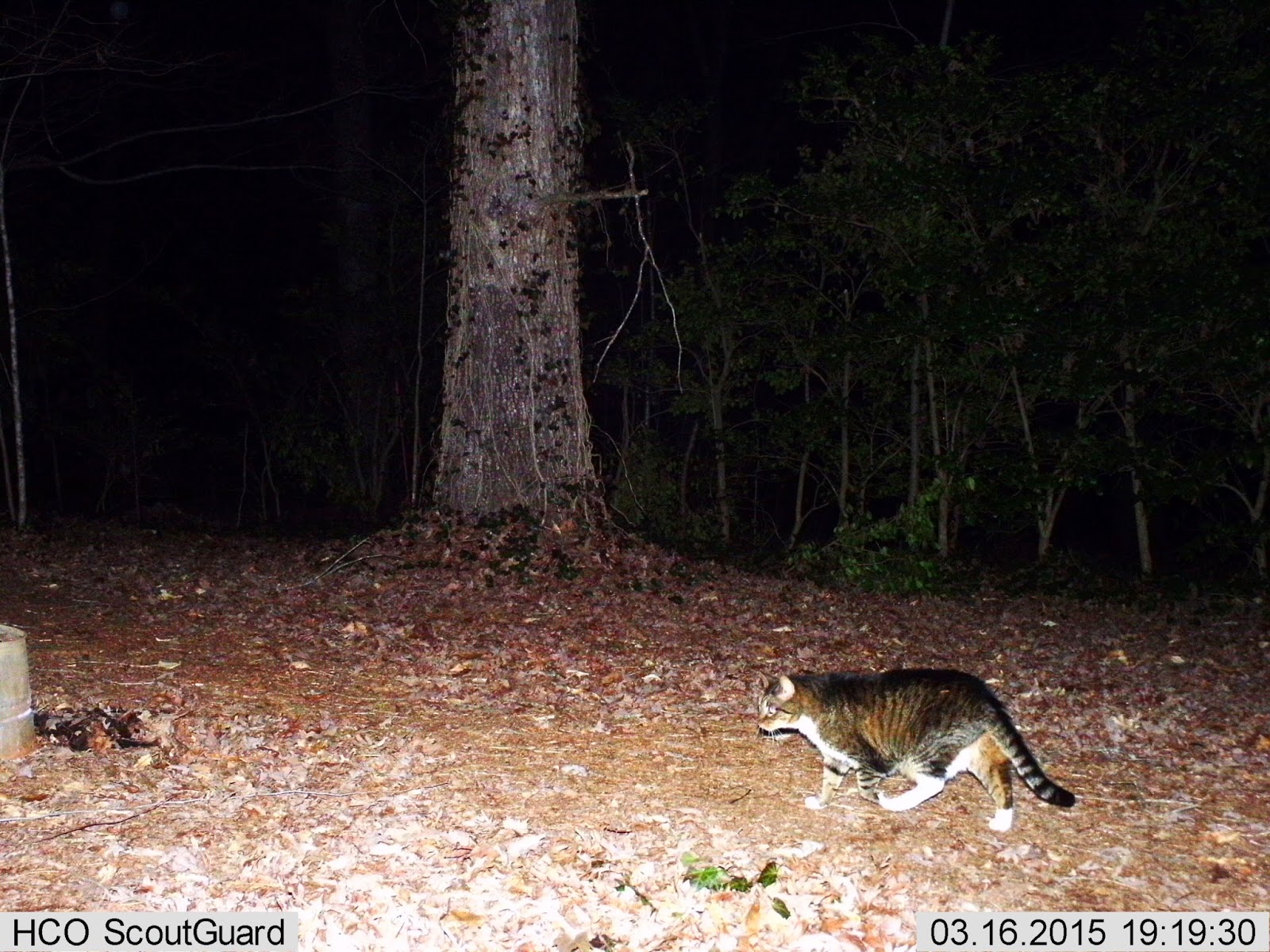 Next this Virginia or Common Opossum (Didelphia virginiana) trundled into view.  It seems to me like opossums have one leg shorter than the rest as they sort of hobble along. The opossum is North America's only marsupial.  The babies are very tiny at birth (Lima bean sized) and must make their way to their mother's kangaroo-like pouch called a marsupium. There they develop until they are able to climb in and out of the pouch and eventually are mature enough to go off on their own.  Twice over the years we've met one stuck in the bottom of a trash can unable to escape the vertical walls of the container.  We've found one eating figs at night from fig tree branches overhanging the deck railing a time or two.  As a teenager I kept ten young opossums for a few weeks.  A local family doctor who lived next door brought them to me after accidentally hitting their mother in the road on his way home the night before.  We gave the half grown opossums to a park ranger who took them to a "menagerie" at a nearby state park for the public to view. 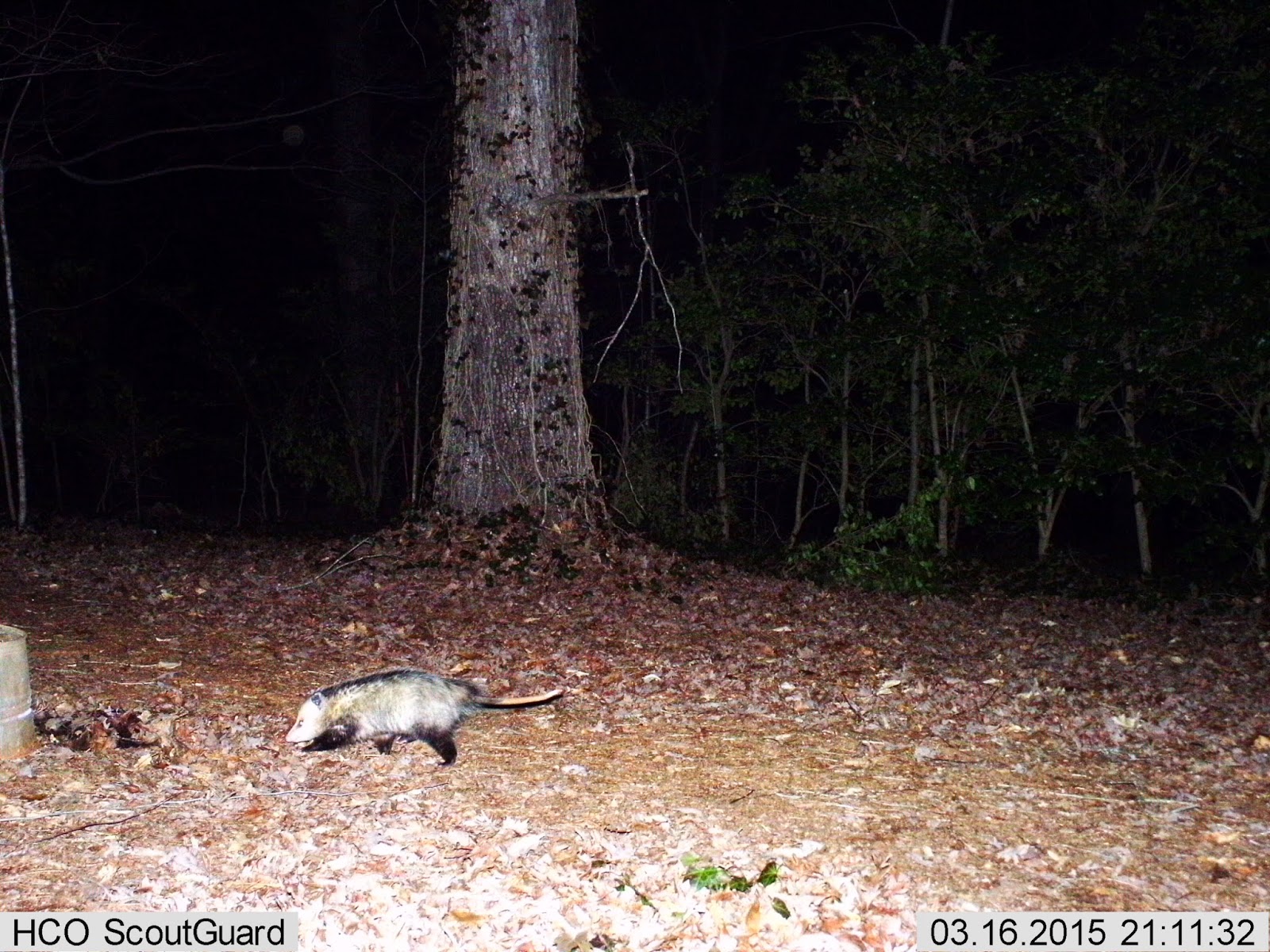 Heading for the deer block next was another neighborhood cat.  This was a solid black kitty that reminded me of my sister's college cat that she named Dawg! 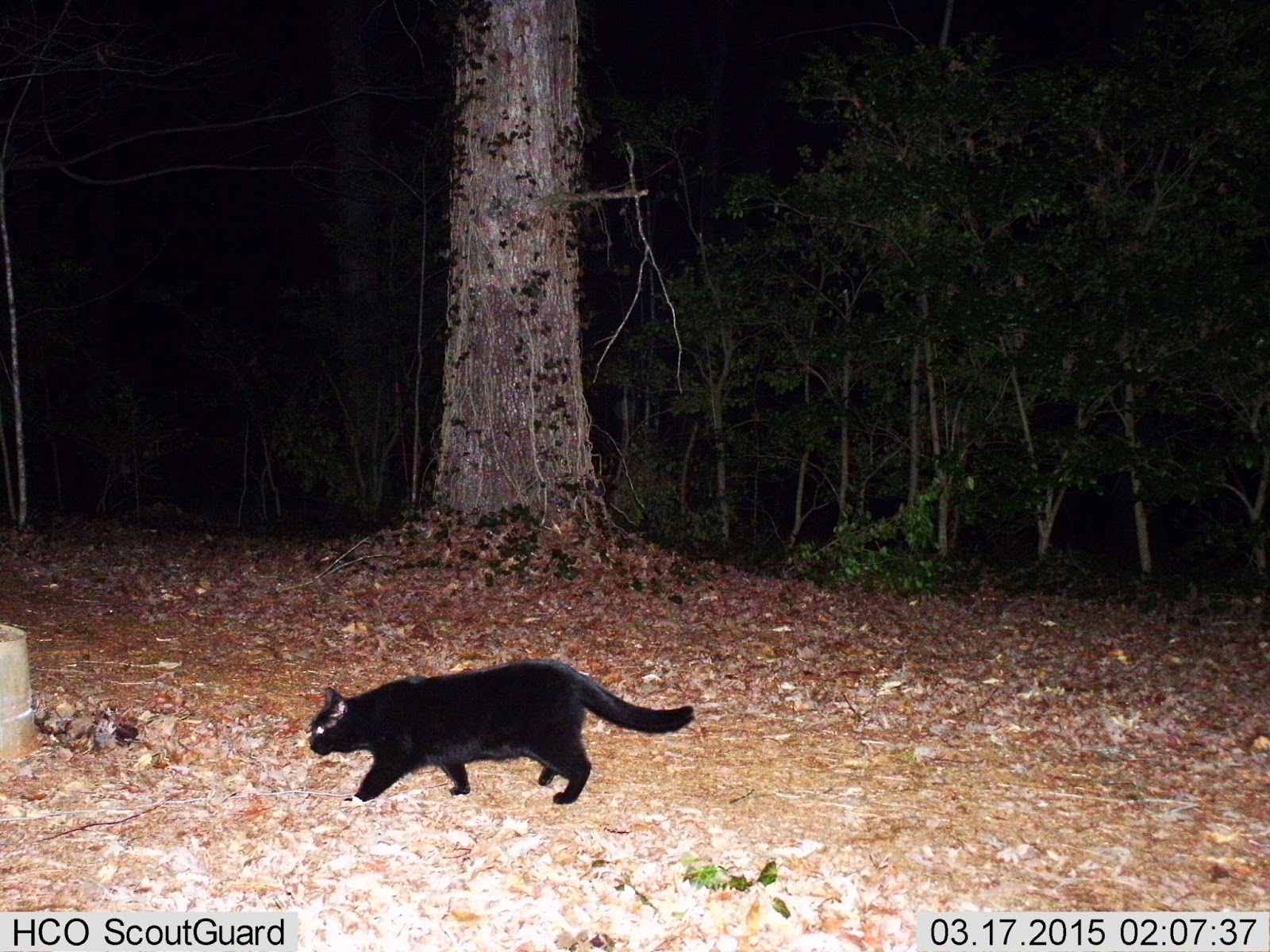 A raccoon was next in the parade of animals. It was in the area off and on for 45 minutes.  I'm not sure whether it was scared off by the flash or not, but if so it returned for a second and third visit.  I learned that the scientific name comes from the Latin and Greek for "before dog washer" (Pro-cyon lotor) which alludes to the raccoon's propensity for sometimes scrubbing and dipping food items collected from shallow water.  I also learned that the English settlers at Jamestown in the early 1600's took the name raccoon from the sound of the Powhatan tribe's word for this masked creature. 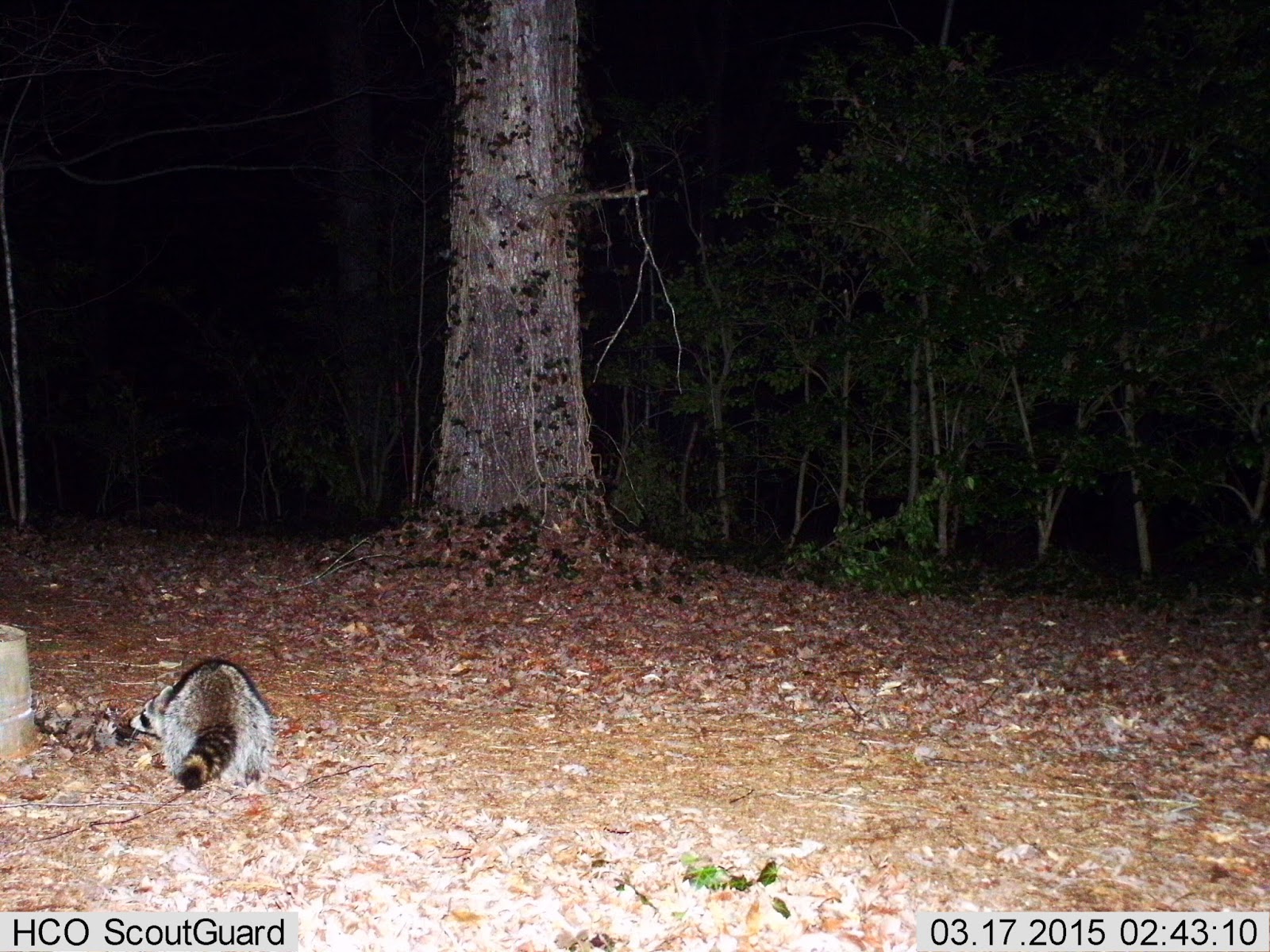 Here you can see two of the raccoon's most recognizable features, its ringed tail and its black mask. 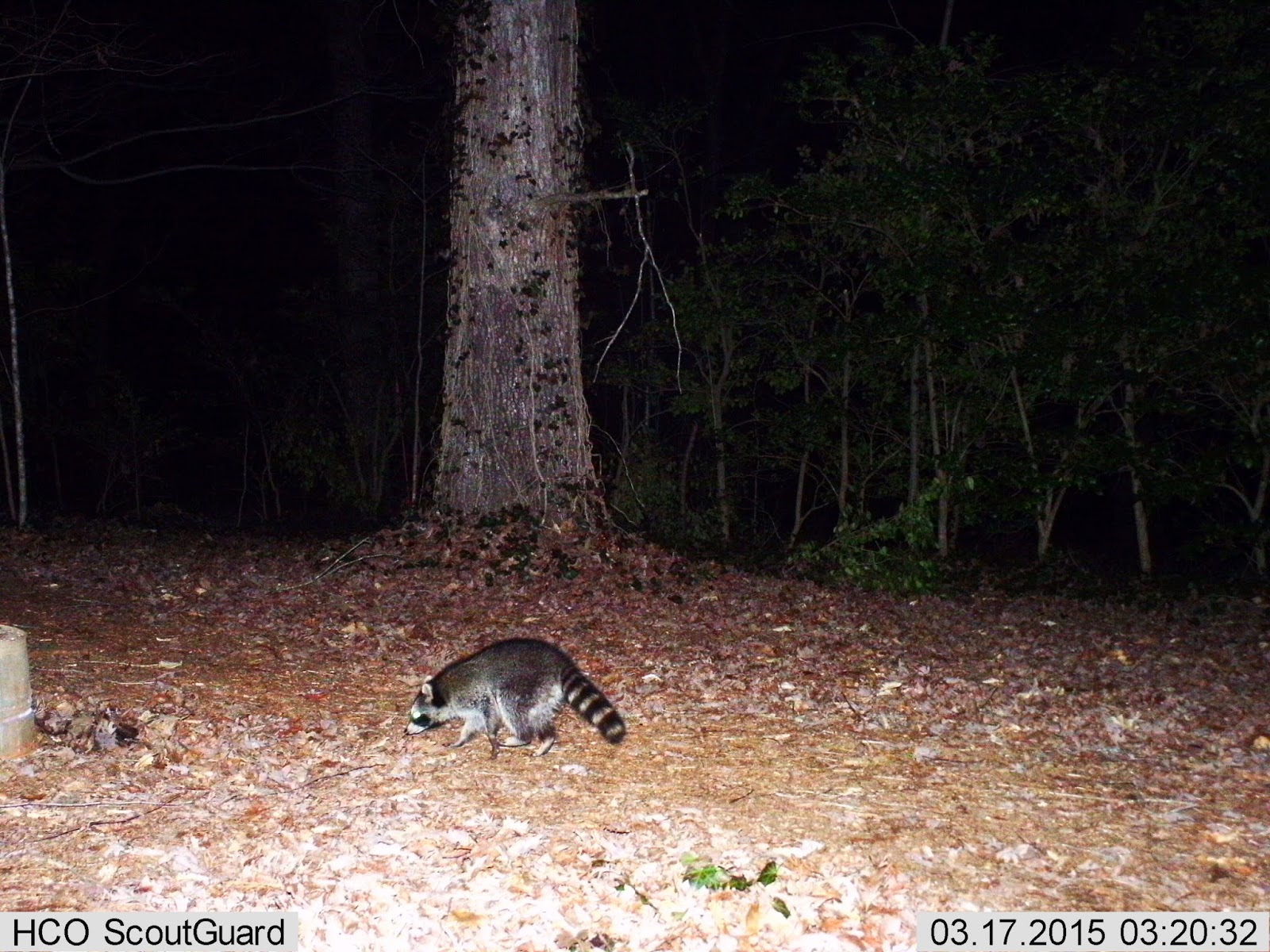 Raccoons are also known to be very clever mammals.  The toes on their front feet have pads that become very flexible when wet which aids in identifying food items. 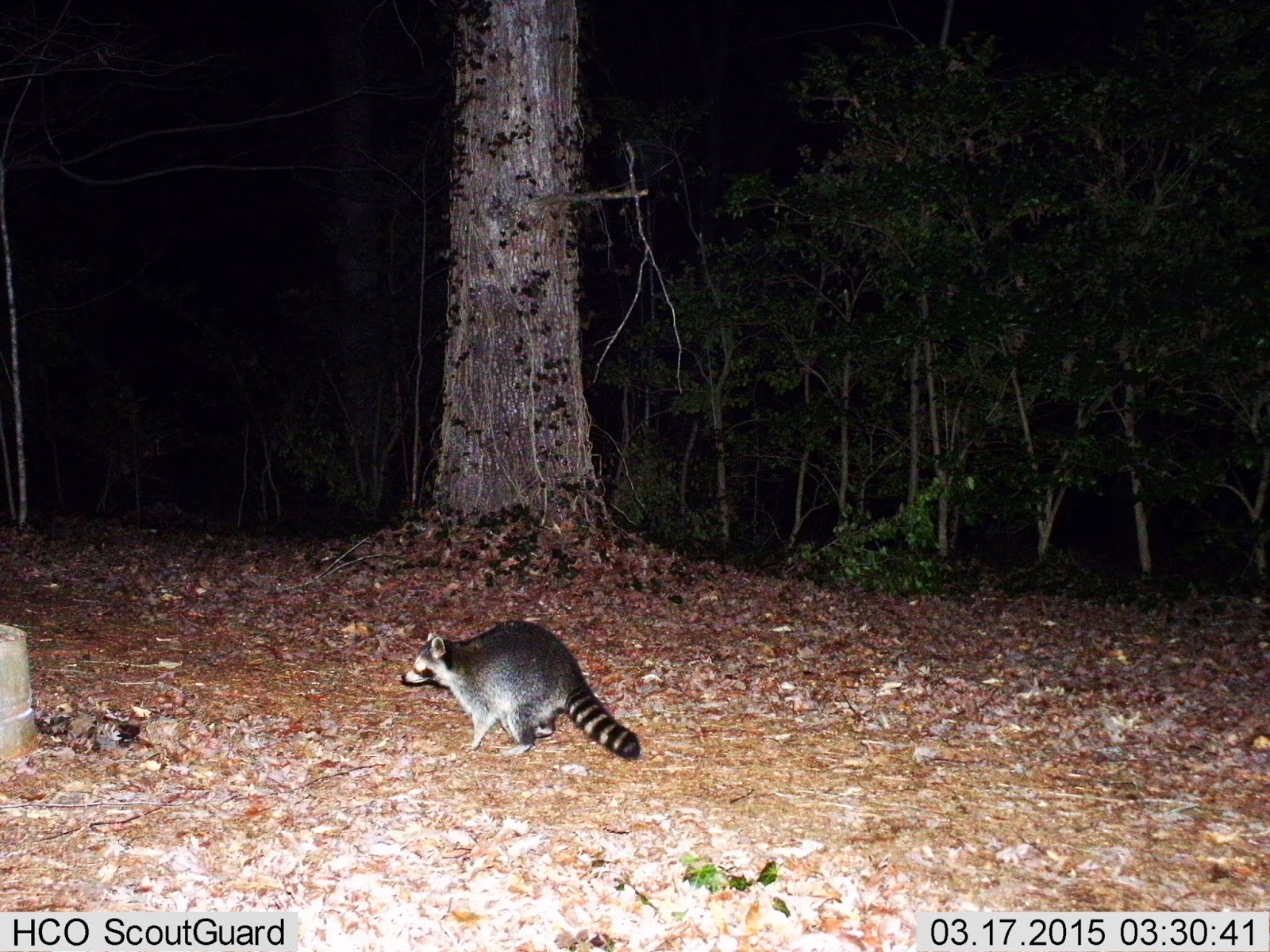 This secretive canine visitor arrived next with what appears to be huge "headlights" for its eyes.  This is our native gray fox  (Urocyon cinereoargenteus which translates to "tailed-dog - ashen silver").  I have seen red foxes in our yard during the daytime a number of times over the years and we know that pair raised kits a number of years less than a block away from our yard.  But this is the first gray fox I've seen here. Years ago I learned that gray foxes have retractable claws like cats and are quite able to climb trees.  In fact these gray foxes are one of the oldest canines. The earliest fossils are from 3.6 millions years ago. 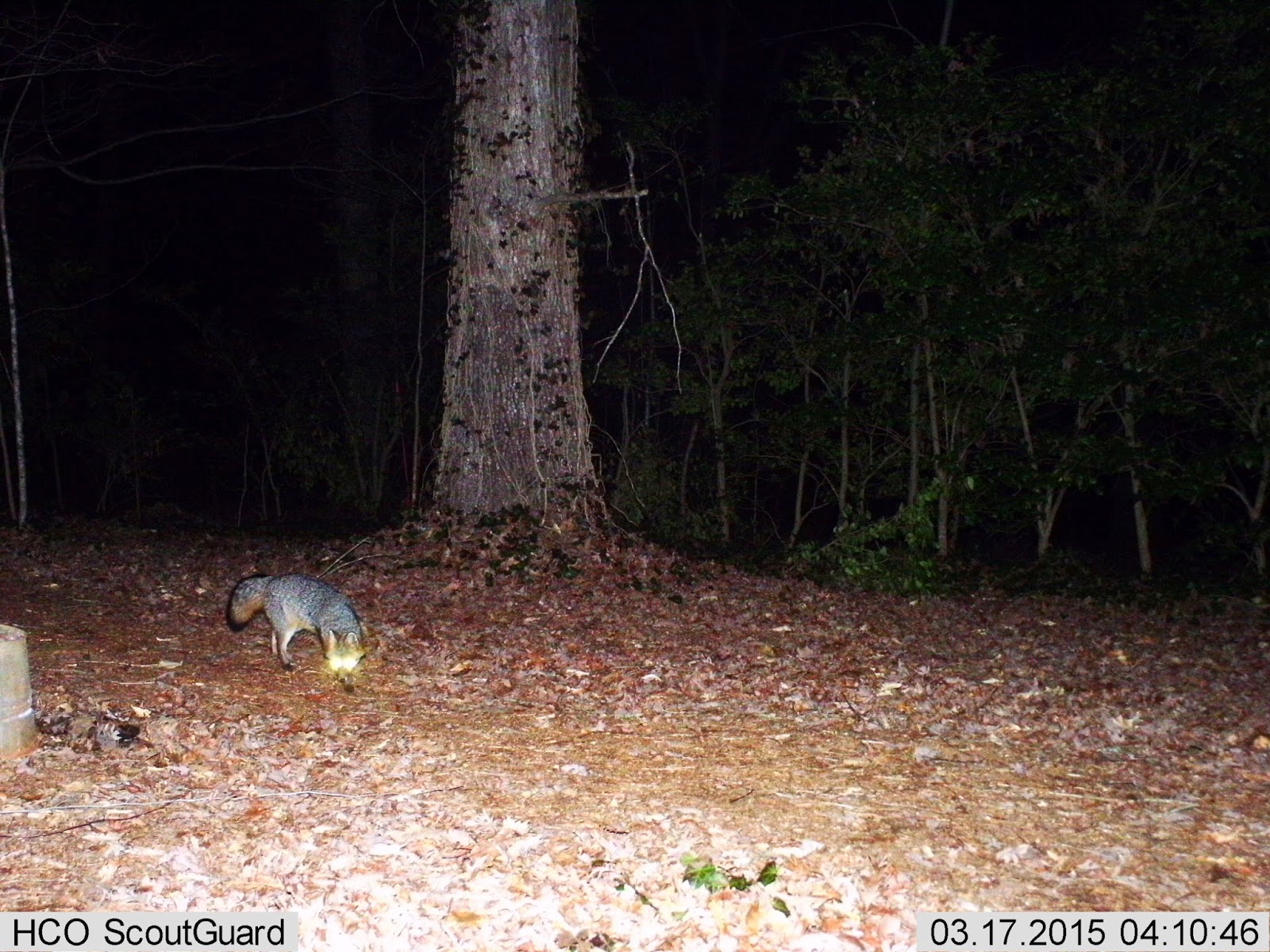 For a few minutes around 4:30 AM a male White-tailed deer showed up and triggered the camera four times.  Recently a coworker had told me about looking for a dark mark on the inside of the hind leg as an identifier for a male White-tailed deer.  This is the tarsal gland that the male deer uses to alert other bucks and does of its presence by marking vegetation it passes through. 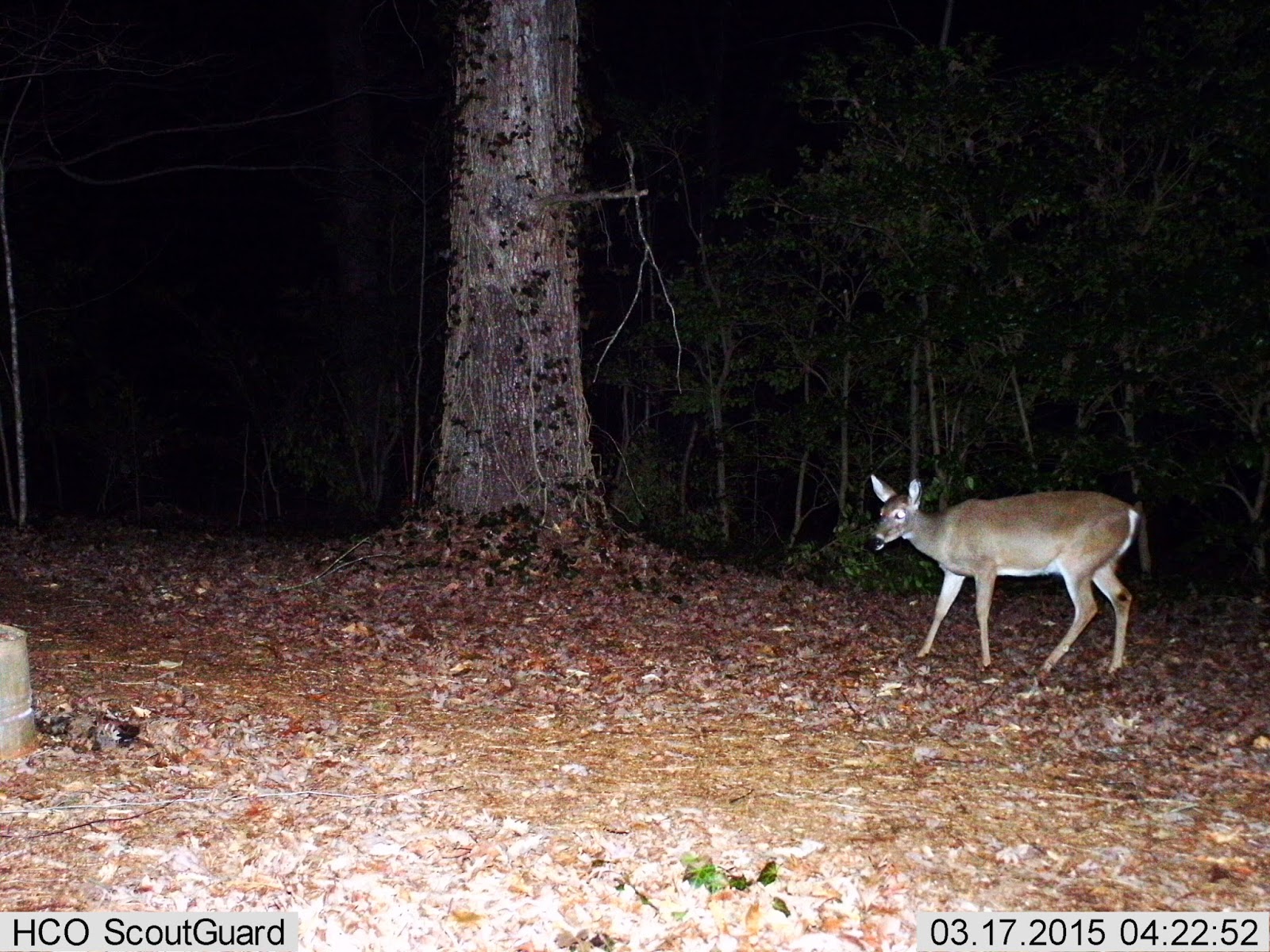 I did not see evidence of anything eaten from the deer block, but I believe the deer may be eating white oak acorns that are still on the ground in small numbers. 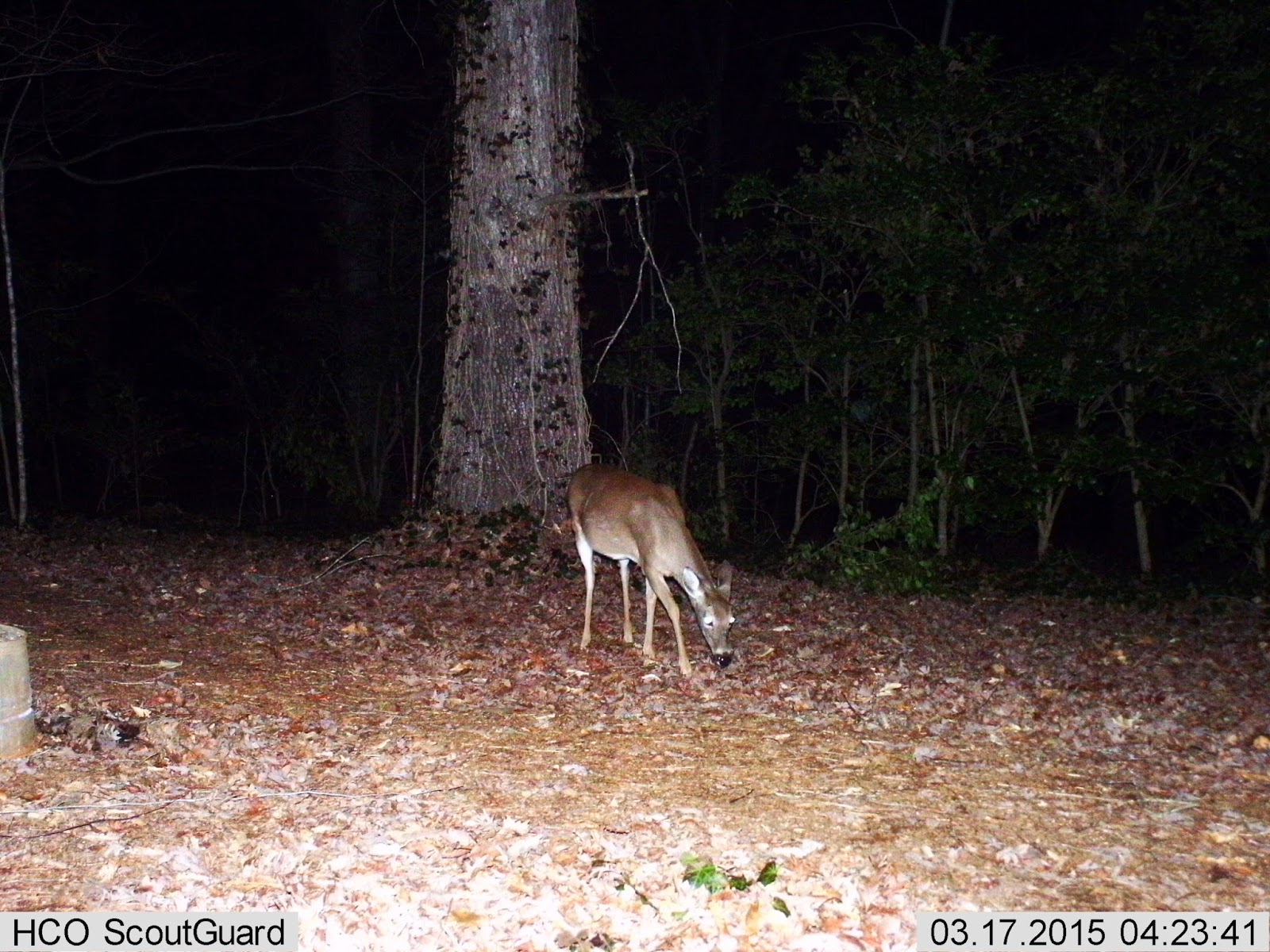 Perhaps this buck is getting curious about all this flashing going on. 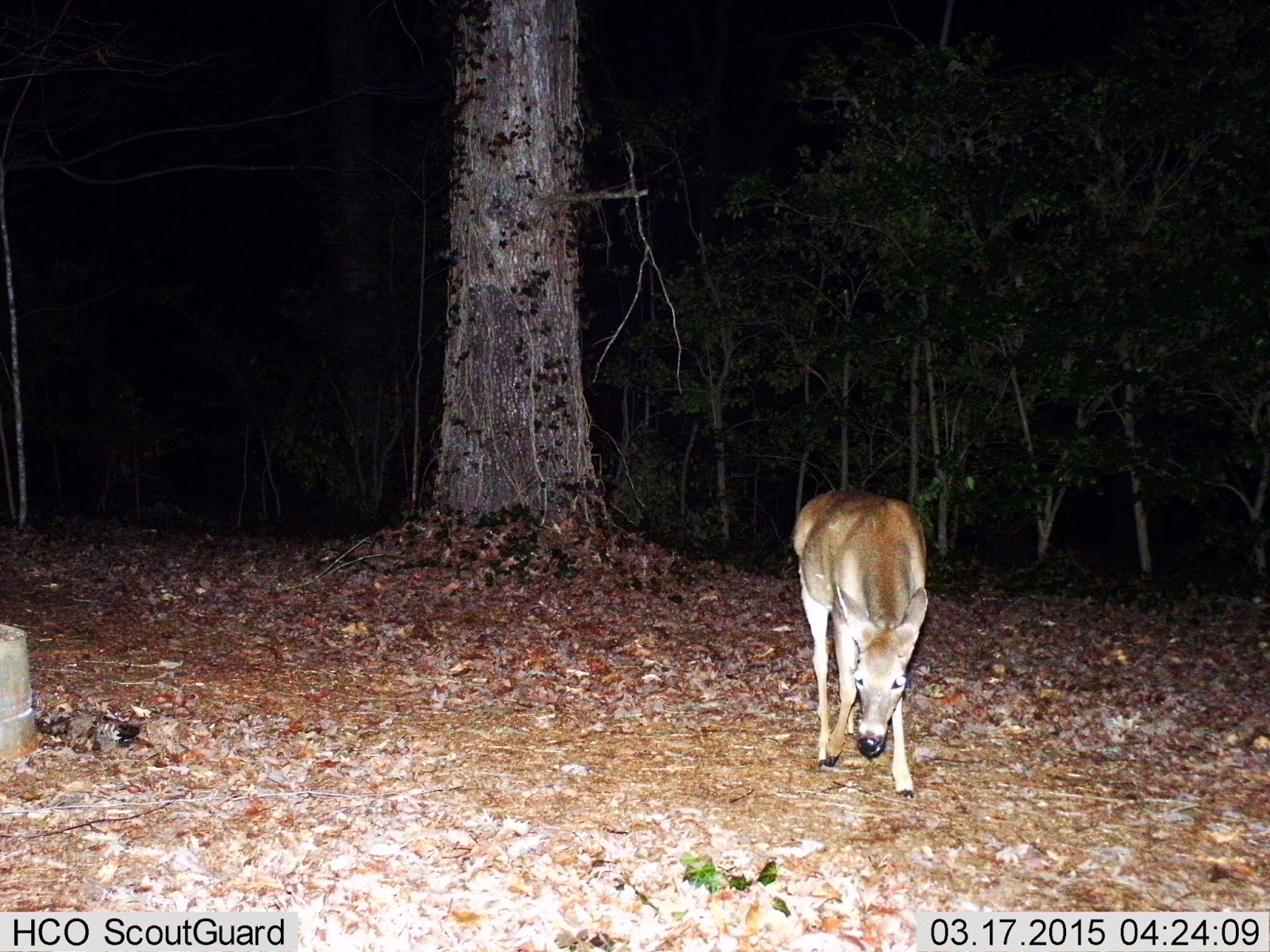 Thirty seconds later he is still in front of the camera.  The flash must not be bothering him too much. 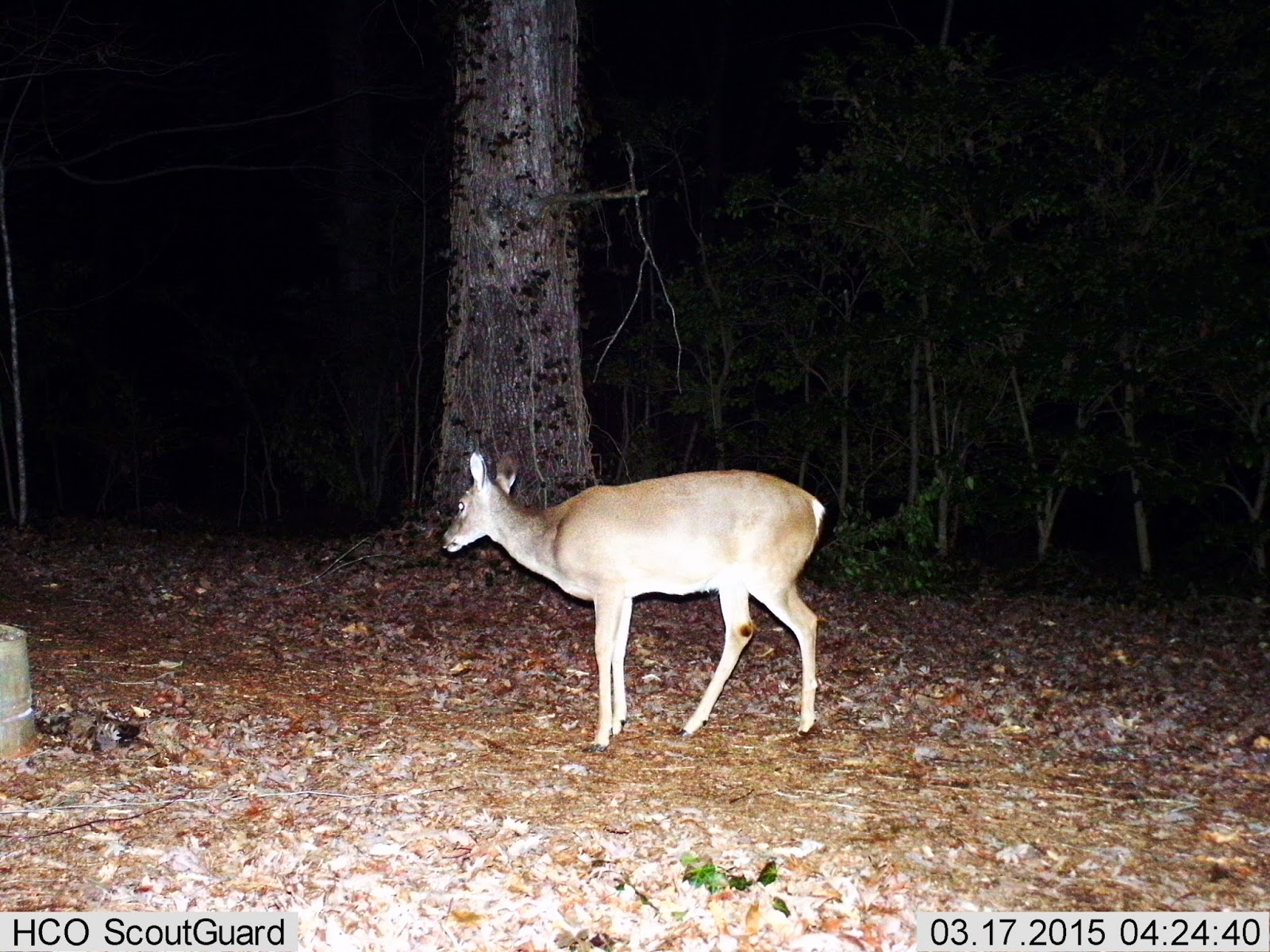 Another masked friend showed up for about thirty minutes around 5 AM.  It's possible this is the same individual, but to me it looks lighter in color than the previous visitor. 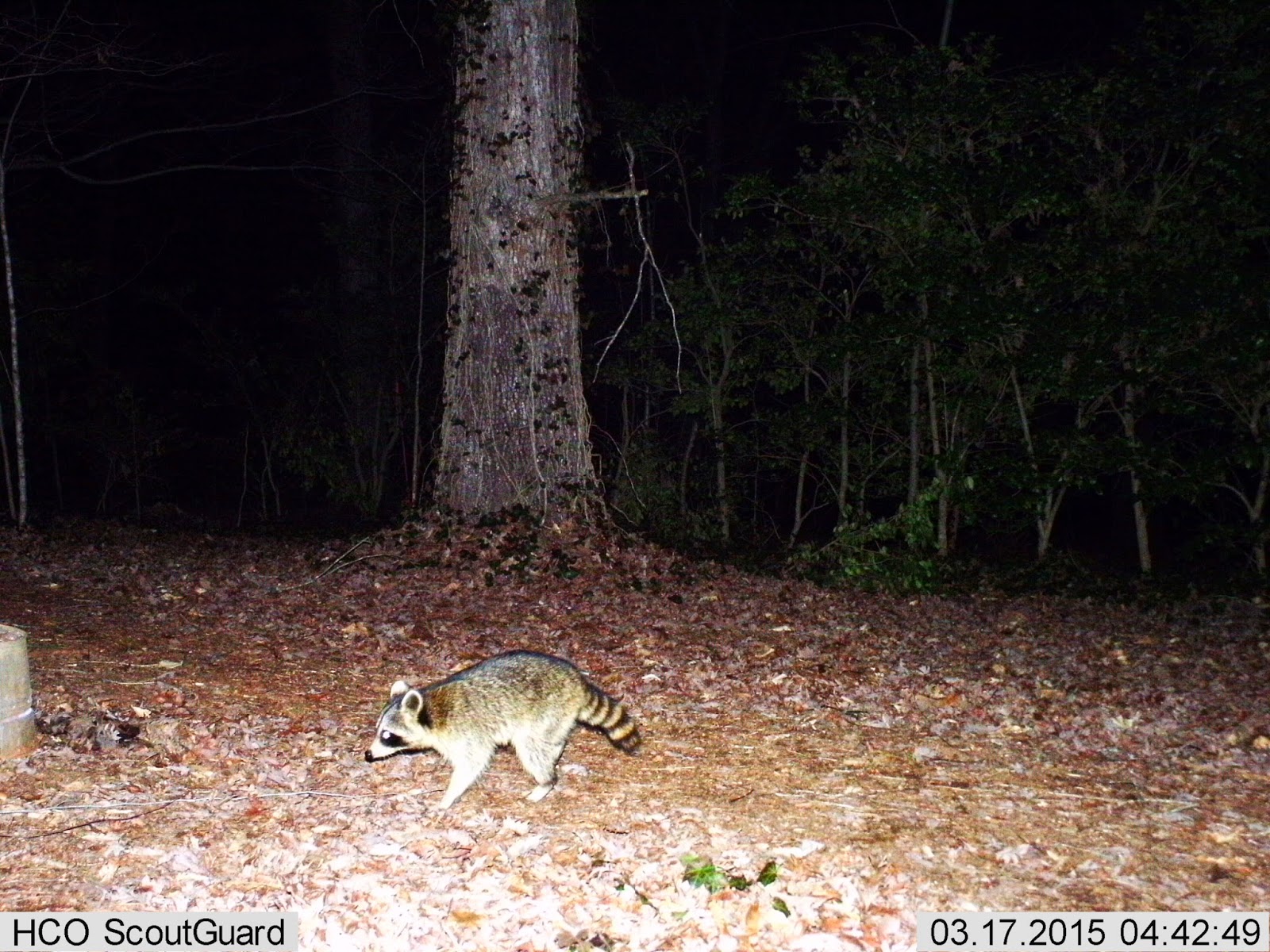 This is a nice view of the raccoon's fluffy ringed tail. 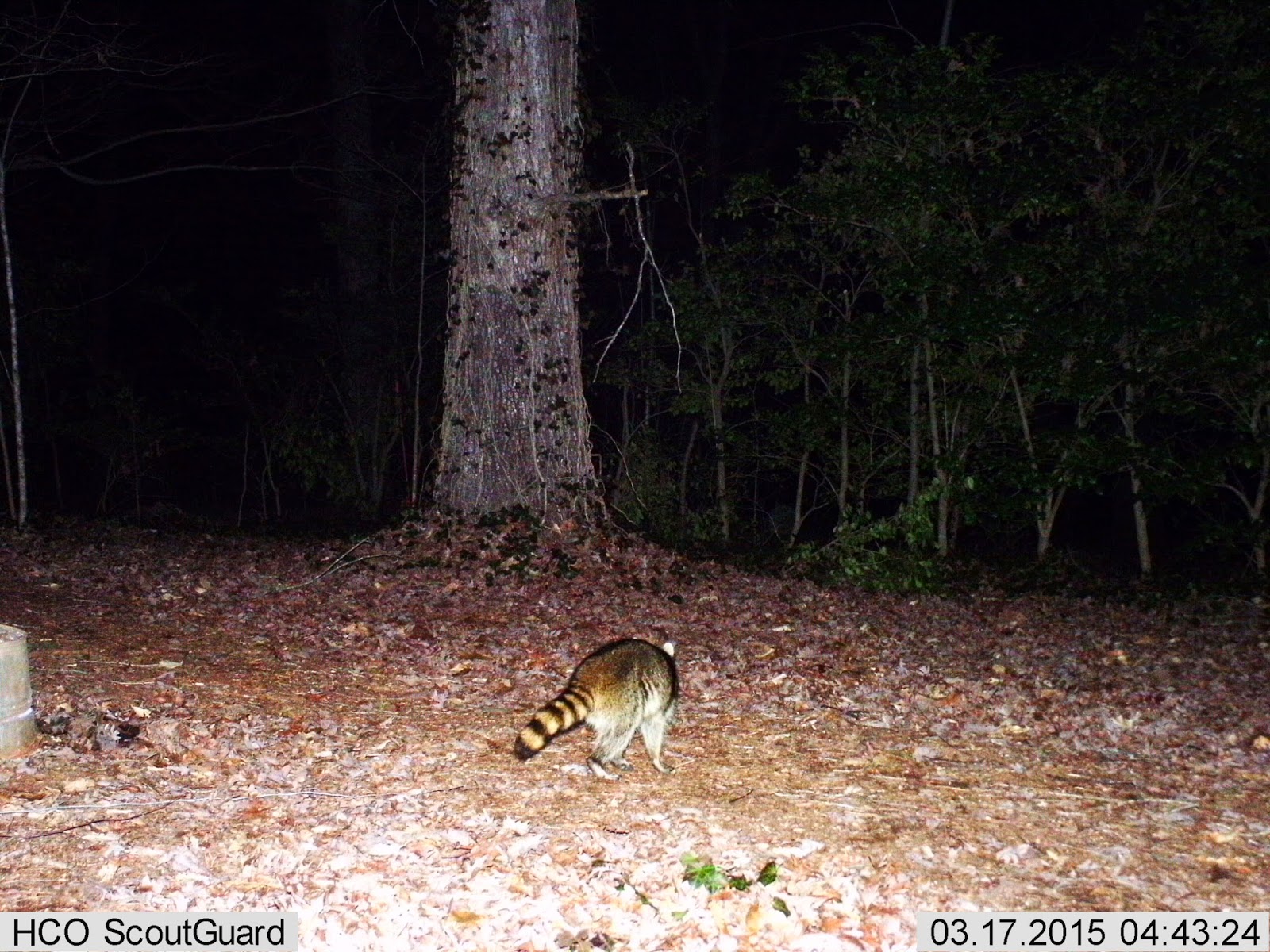 Looks like this raccoon is looking for acorns, too. 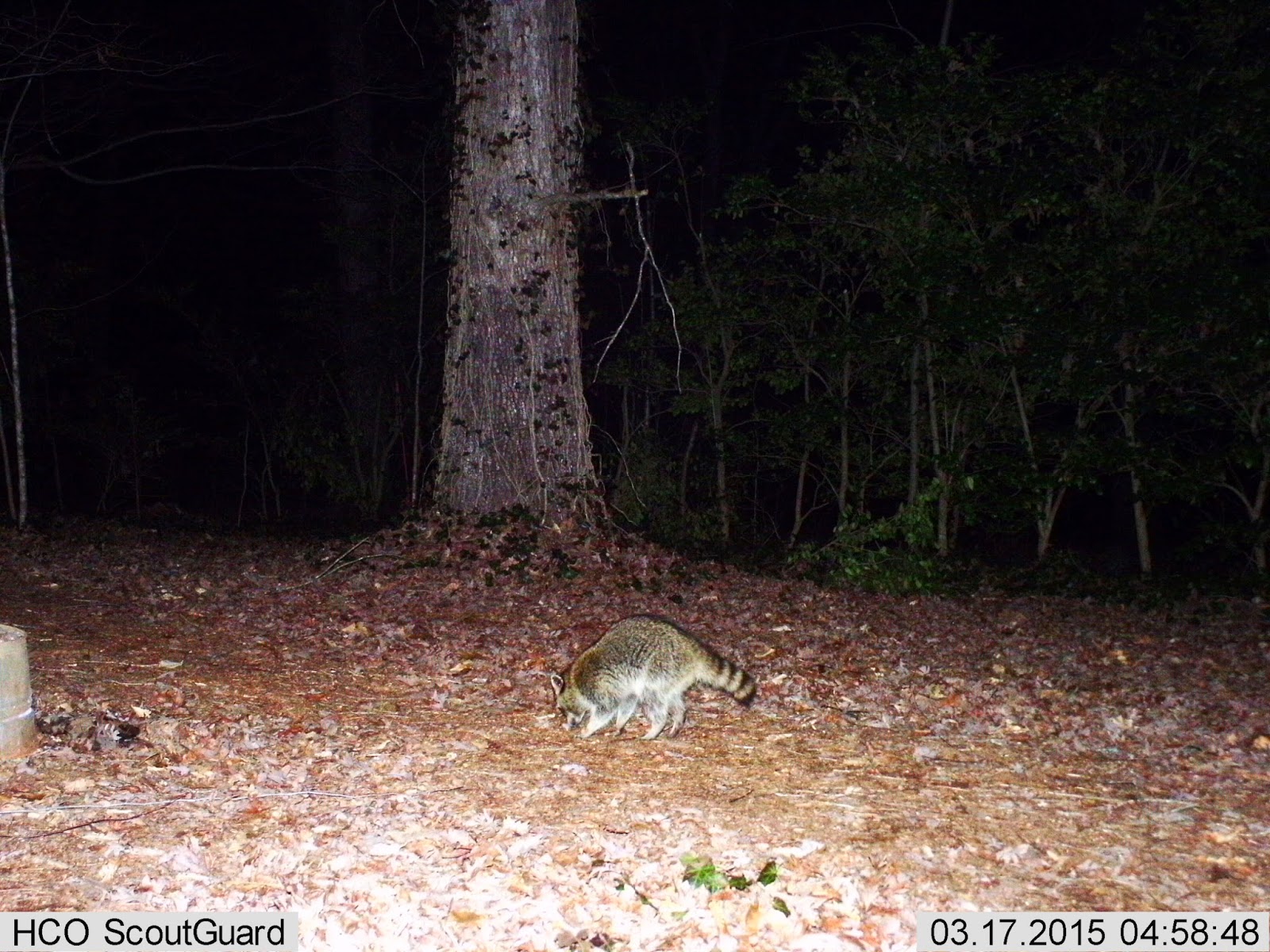 Maybe one more acorn before I go? 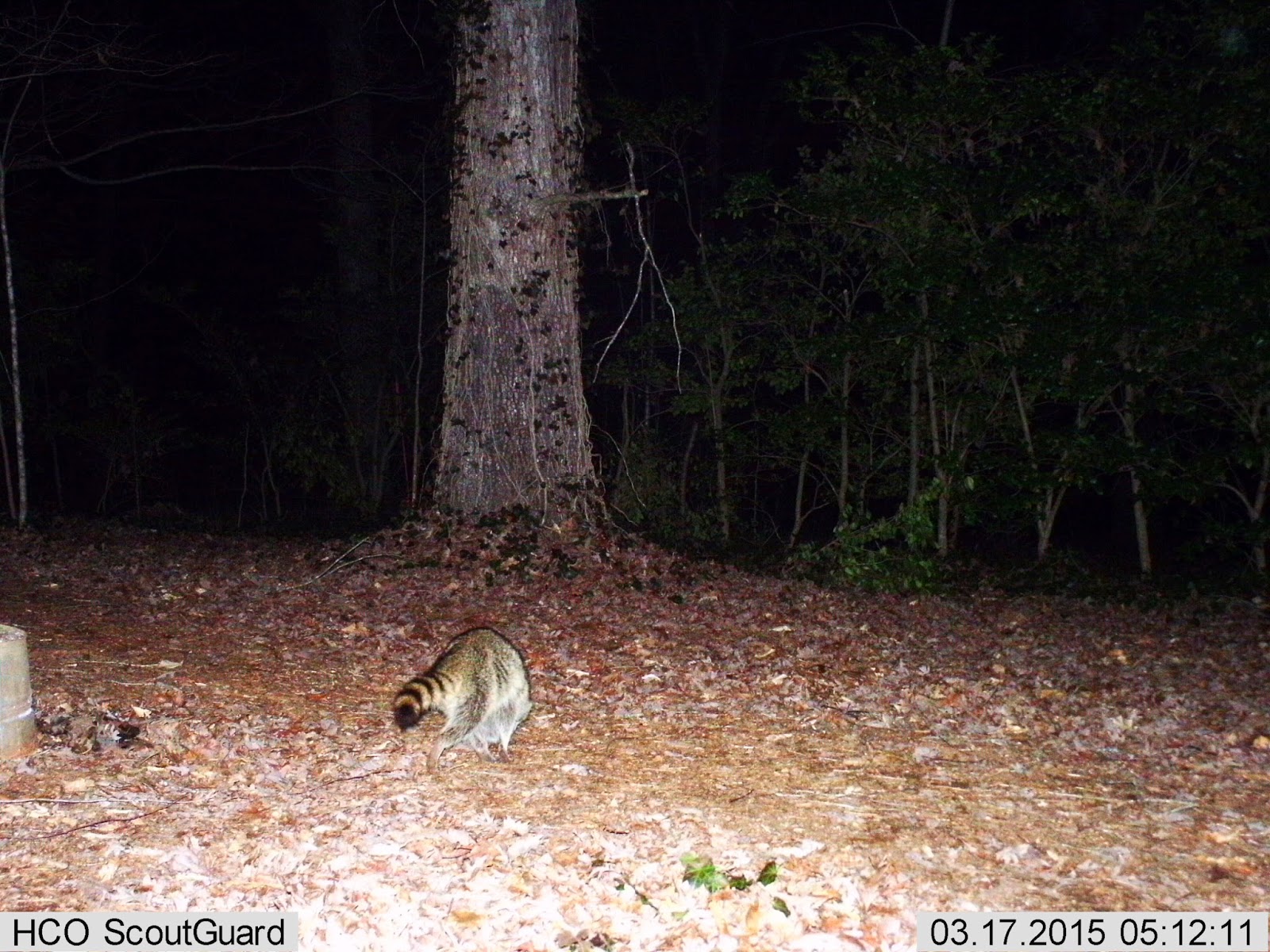 Over the next few nights the camera caught a gray squirrel just before dusk and another shot of a raccoon on top of the deer block.  I'll wait a few days before I check the SD card again.

Posted by From Bluebirds to Turtles at 8:18 AM