ALONG CAME A SPIDER. EEEEK!

Little Miss Muffet
Sat on a tuffet,
Eating her curds and whey;
Along came a spider,
Who sat down beside her,
And said, "What's in the bowl, kid?"

There was so much to see during the late summer that I wanted to share.  When you stop and look at the same places each day, you are likely to find some pretty interesting creatures.  This post is about four spiders, one of which was new to me.﻿

First up is a little quarter-inch long spider that I visited several times over the summer, trying to figure out what it was.  I assumed, wrongly, that this was an immature spider that would grow up to be something that I'd recognize.  Often there would be two or three spiders of two different color patterns scooting around with their bellies up, and seemingly between layers of a web which were built across an open area on one side of a small shrub.  It wasn't until I attended this year's BugFest at the NC Museum of Natural Sciences, along with about 35,000 other folks, that I found the answer.  At a booth called "Stump the Experts", Dave Stephan looked at my photos and identified this small arachnid as a Bowl and Doily Weaver.  The Bowl and Doily Weaver spider is a sheetweb weaver that constructs a web with two parts.  The top section is a bowl shaped web with a network of trip lines above it.  Below the bowl is a flat sheet-like web that looks a bit like an old timey doily.

(link to a picture of a doily)


Looking down through the center of the bowl, perhaps you can make out the underside of this female Bowl and Doily Weaver and some of the debris left in her web. 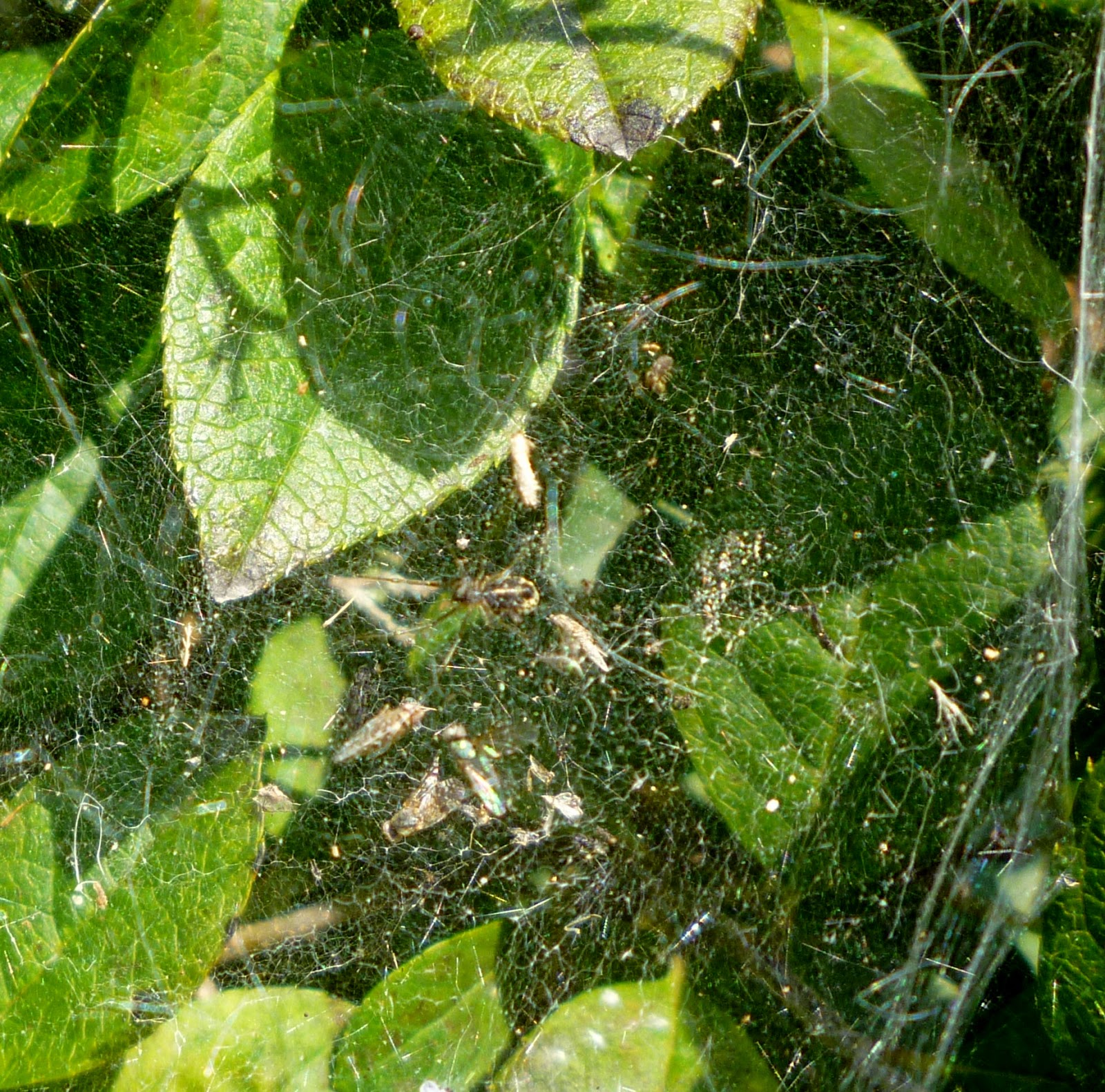 This is a side view of the female Bowl and Doily spider. Her abdomen is boldly marked with black and creamy white while her cephlothorax and legs are brown. She is hanging upside down on the underside of the bowl with the trip lines extending to the upper left and part of the doily beneath her to the lower right. Flying insects hit the "trip lines" and fall into the "bowl".  She will grab a small insect from beneath the bowl, pull it through the web, and wrap it in silk.  The spider often sits on the doily portion of the web to feast on her prey. 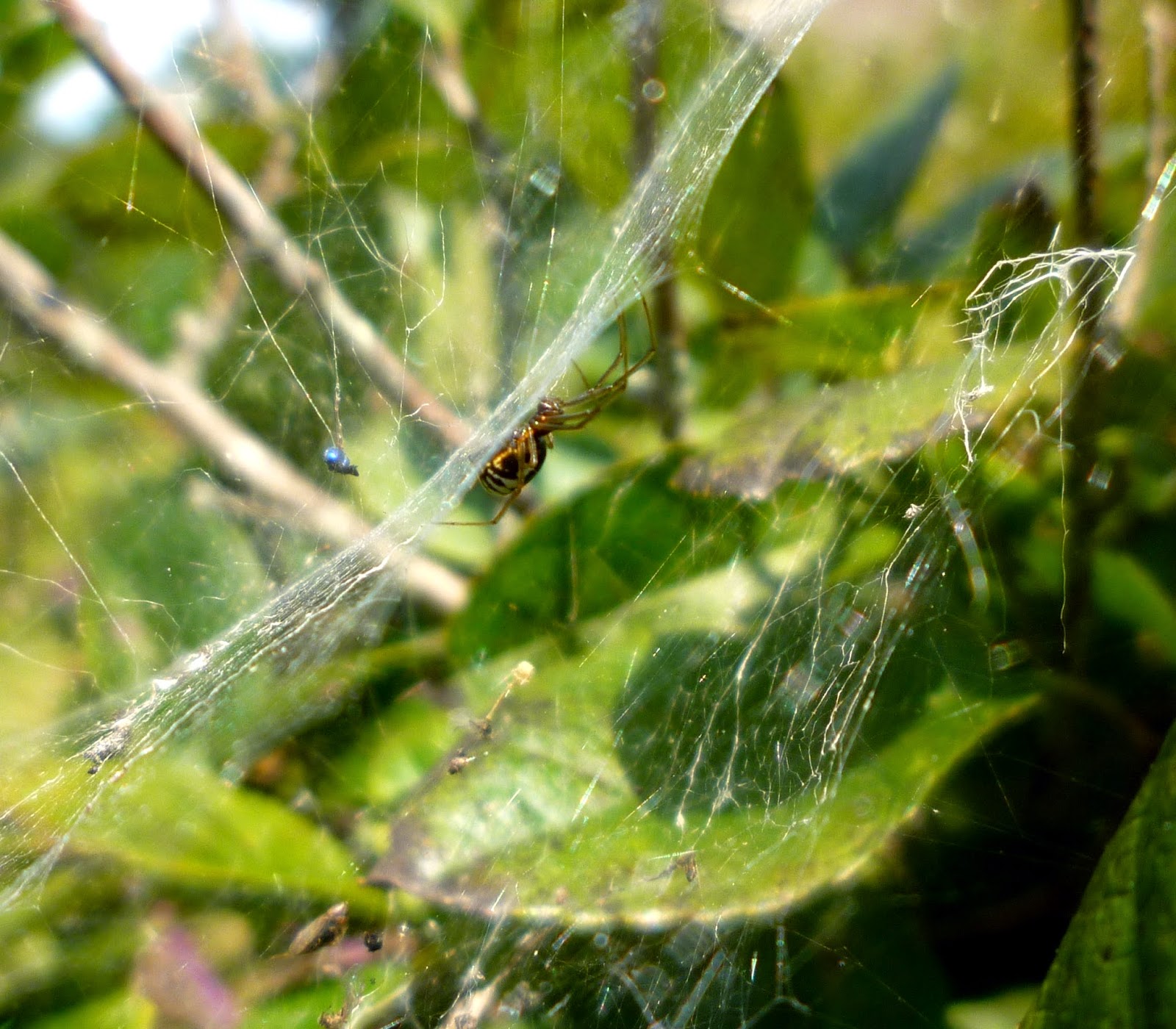 One or more male Bowl and Doily Weaver spiders may live in the female's web even after mating, competing with her for the food provided by the web she built. There are two theories for why the females sometimes allow the males to remain in the web.  One is that it takes too much of the female's energy to chase the male off. She needs to conserve her energy for securing and consuming her own food and also for producing the eggs that will become next generation of her species. Another theory is that the female has a reduced chance of being eaten by other species of spiders that feed on Bowl and Doily Weavers if her male counterparts are also available in the web.

(link to Bugguide picture of male)

I will definitely be looking for more opportunities to observe this spider species in future summers!


Information on cohabitation is from : http://bobklips.com/lateaugust2009.html  and

Late in the summer the female Black and Yellow Argiope spider in our front yard has gotten quite large, likely with many eggs.  Two other common names are Writing Spider and Scribbler because the zig-zagging stabilimentum she constructs in the center of her orb shaped web looks a bit like scribbly writing.  She is also called the Yellow Garden Spider. The males are very small and sometimes become her meal after mating.  In our area, the female dies at the first hard frost, but in warmer climates the female can live for a few years or more.  She makes one or more tan colored egg cases that each can hold between 300 and 1400 eggs.  The eggs hatch in autumn, and the spiderlings survive the winter by remaining in the egg case until Spring.  The egg case also protects the little spiders from some predators, but I read that "one study found that in addition to" young argiopes, "nineteen species of insects and eleven species of spiders also emerged from egg cases!"

(link to more about the Black and Yellow Argiope)

(another link to more about the Black and Yellow Argiope) 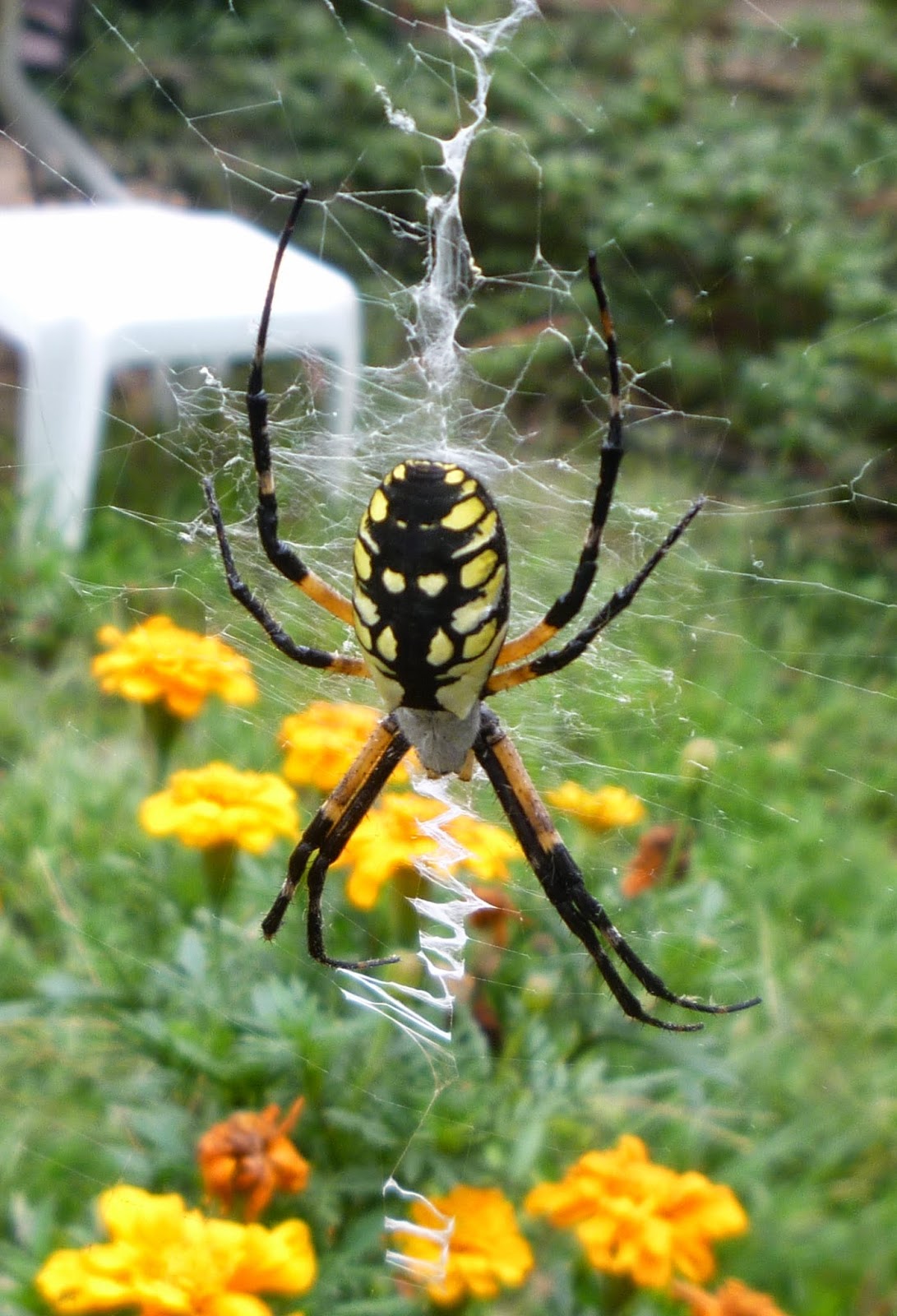 This spider with the marbled abdomen and light brown legs is a female Common House Spider.  These spiders live almost exclusively around human dwellings and are responsible for the cobwebs in the corners around the inside and outsides of our homes.  The Common House Spider, which is usually harmless to humans, is related to the venomous Black Widow Spider.  Both species have a globe-shaped abdomen and build a "tangle" web.   I read that the tangle web design is an adaption to protect the cob web spiders from being captured by mud daubers.


(link to Bugguide picture of a male and a female)

(link to Bugguide picture of egg case and spiderlings)


(link to wikipedia picture of male and female House Spiders) 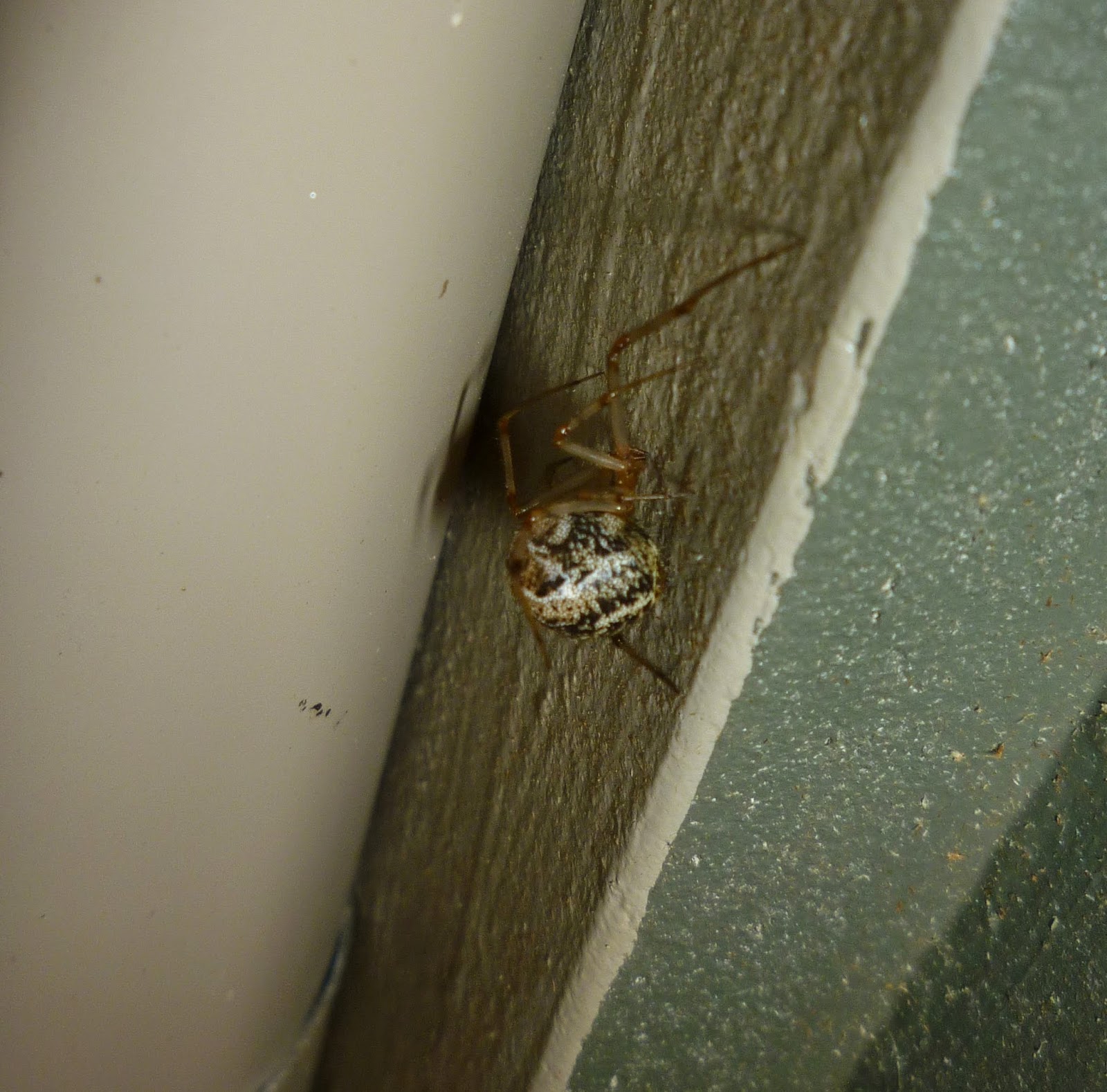 
This variably colored spider is sometimes called the Cross Spider because of the cross-shaped mark on the back of its abdomen, but is also known as the Barn Spider and the Spotted Orbweaver.  Late every summer several of these spiders build their webs in front of our doorways and windows, and across the sidewalk. They seem to appear out of nowhere, but in fact they have been getting bigger through out the spring and summer and are now filled with little spider eggs.  Before long this spider will spin a yellowish silken egg case that will hold up to one thousand eggs.

This large female has a light colored cross pattern on the back of her abdomen with black, tan, and reddish brown legs. She has plenty of bristles on her banded legs for controlling insects that she catches in her web. 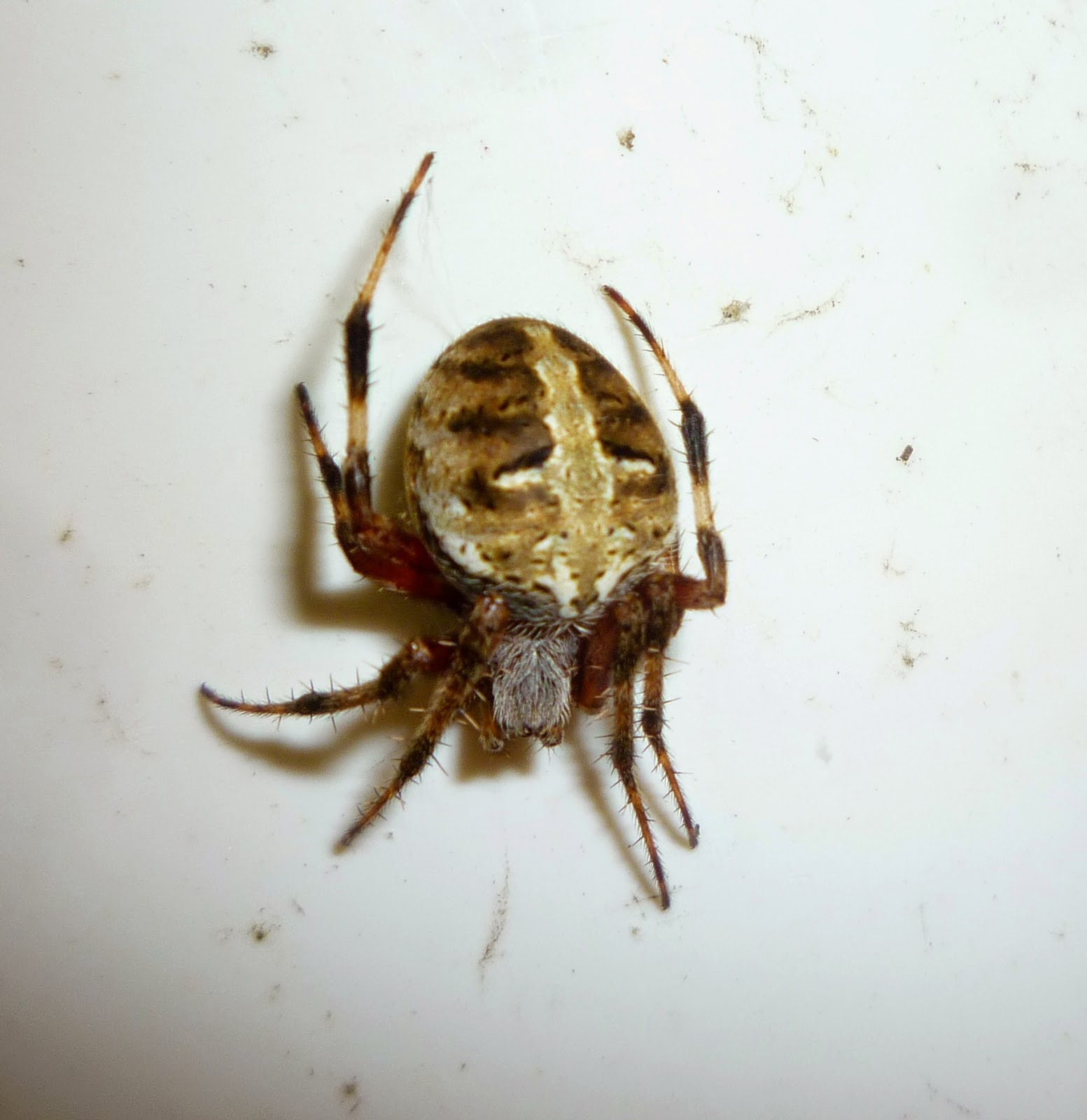 This female Cross Spider is a study in variations of grey. The cross shaped mark is still visible on the back of her abdomen even though it is just a shade lighter than the surrounding surface. 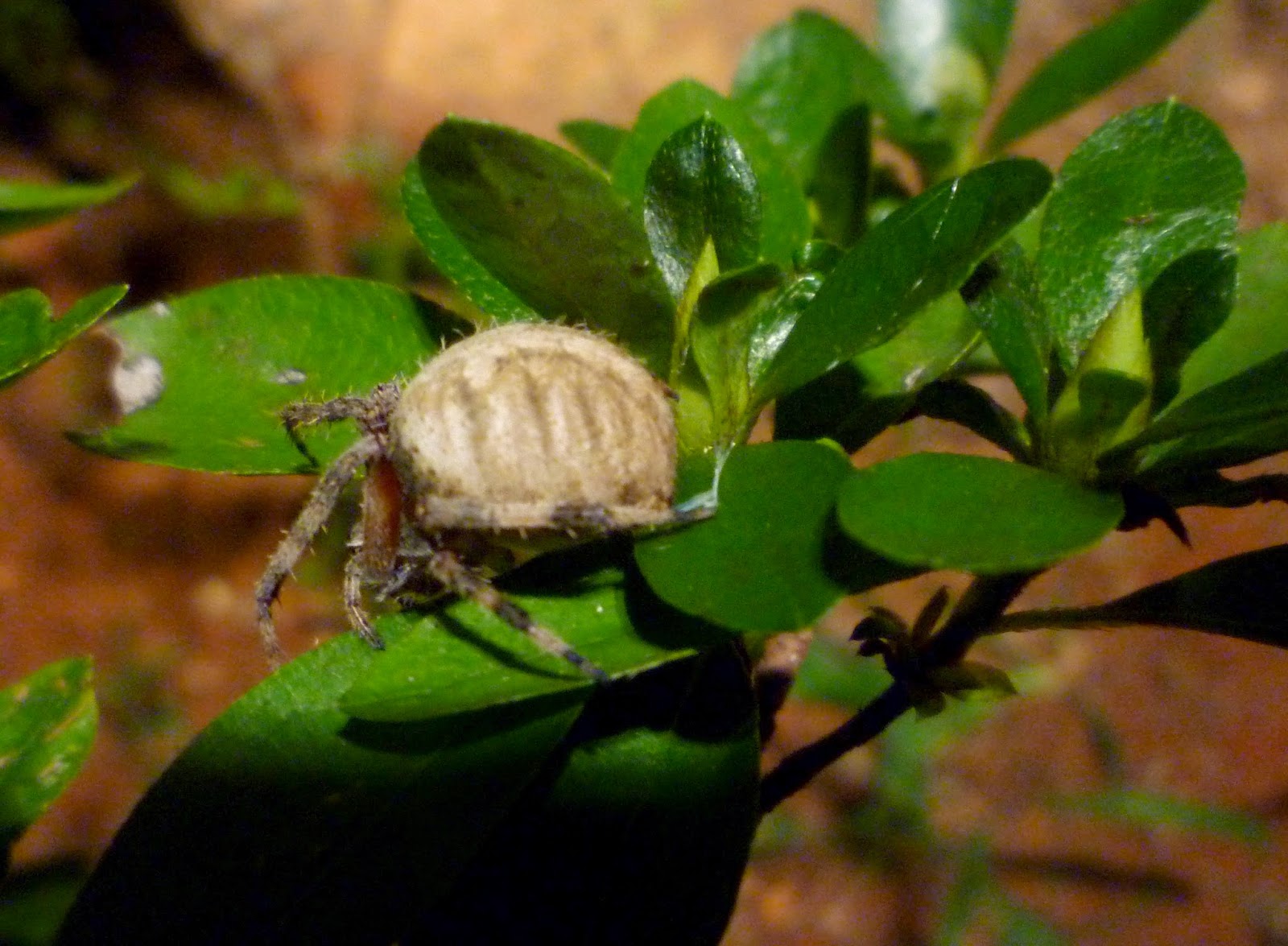 This is the underside of the same gray Cross Spider.  One characteristic of this species is the black mark on the bottom side of the abdomen, framed by a pair of white L-shaped brackets.  Also visible is a single strand of silk she is spinning from her cluster of orange colored spinnerets. 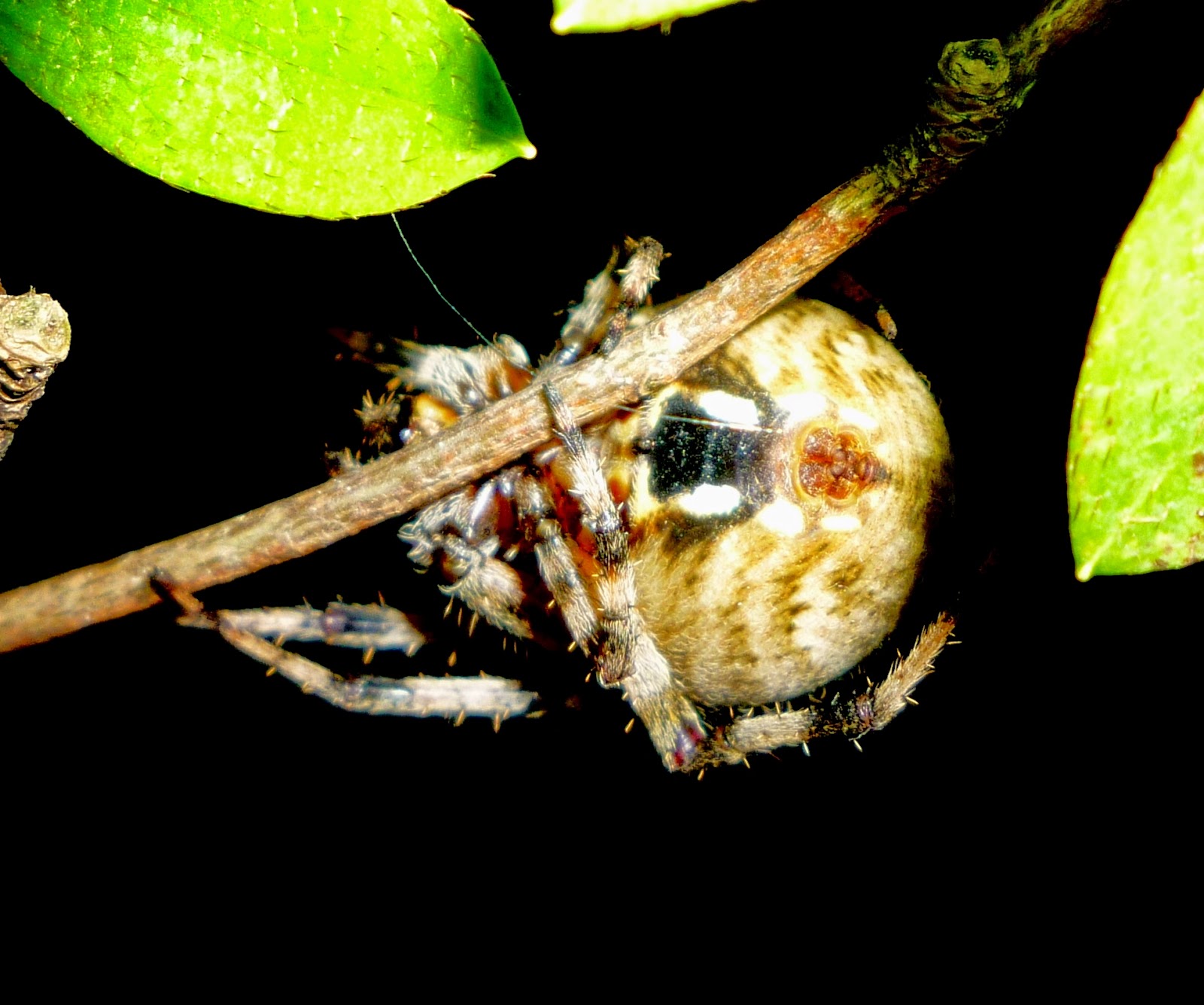 An egg sac produces hundreds of young spiders. To be successful the little spiders need to spread out.  One way to do this is to use a technique known as "ballooning".  The spider finds an elevated leaf or other object, stands on its eight little tiptoes, and casts a long strand of silk into the wind. When conditions are just right, the wind lifts the silk with the spider attached into the air and the "balloon ride" begins. The spider is off to some random new location where it may face less competition for food and have a better chance of survival.

I recently found these two videos in response to a question from my little five year old friend, Brooklynn, who asked me about how spiders fly.

(link to video of spiders ballooning)


(link to another video about spiders flying)

At the upper left of the picture is a broad band of silk that was spun by the gray Cross Spider as she was repelling down to the ground. 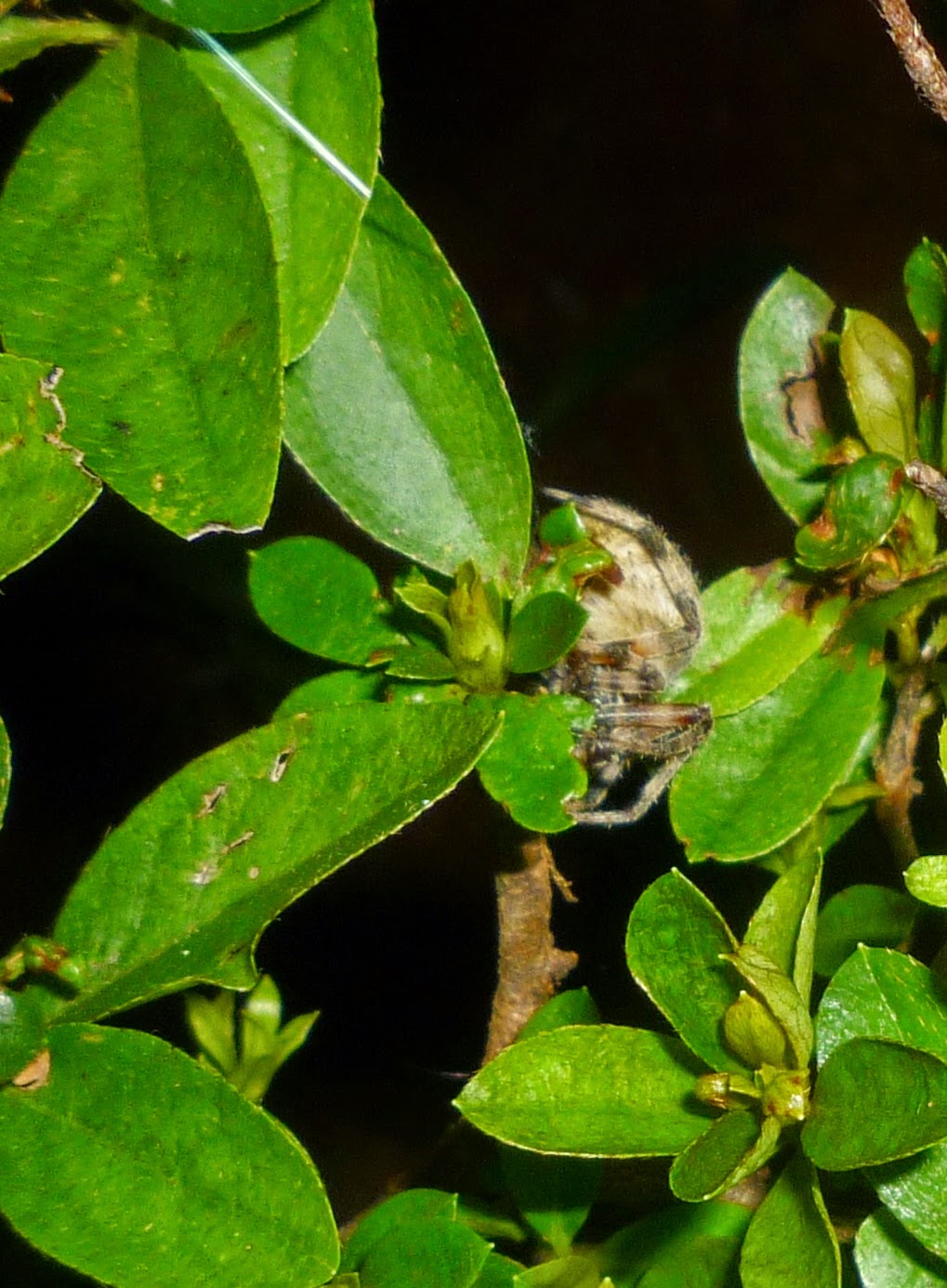 I read that young spiders only build their webs at night and take them down during the day, eating the silk as they do. This is an attempt to protect themselves from two species of Mud Daubers that have a talent for following the web's foundation lines which are not sticky.  Using this method mud daubers find and paralyze young spiders and then store them in the nesting chambers they build out of mud.  A mud dauber fills each chamber with up to twenty paralyzed spiders and then lays an egg on the last spider deposited before sealing the entrance.  When the mud dauber egg hatches into a larvae, it has a large supply of fresh spiders to eat as it matures and later emerges as an adult.

This is one of my favorite photographs.  It was taken by Alan Henderson of 15 paralyzed jumping spiders found in one chamber of a mud dauber nest.  The mud dauber larvae is at the center of the picture dining of one of the spiders.

Some of the information in this post came from:

Posted by From Bluebirds to Turtles at 7:38 AM