Early autumn brought opportunities to observe a number of flying insects, including a few that were species that I had not seen before.  This post features two wasps and two really neat flies.

As I was pulling up the maturing sicklepod plants from around the bird feeders, this little metallic blue-green creature buzzed into view.  It made several brief landings on the stems of the largest plant.  Of course, I was off to Google in search of an identification.  It didn't take long to find that this insect was some species of cuckoo wasp.  I found that there are 61 cuckoo wasp species in North Carolina and about 3000 worldwide.  They are an insect that has been found in the fossil record up to 140 millions years ago!

These wasps do not make their own nest, but lay their eggs in the nests of a host insect.  These hosts include bees, flies, and other species of wasps.  There are bird species that use this same nesting behavior.  One of  these is the European Cuckoo for which this wasp family is named.  Another is our native Brown-headed Cowbird. Some cuckoo wasp larvae eat the host insect's larvae as well as the food items stored for it, while some cuckoo wasp larvae eat just the host's paralyzed prey. 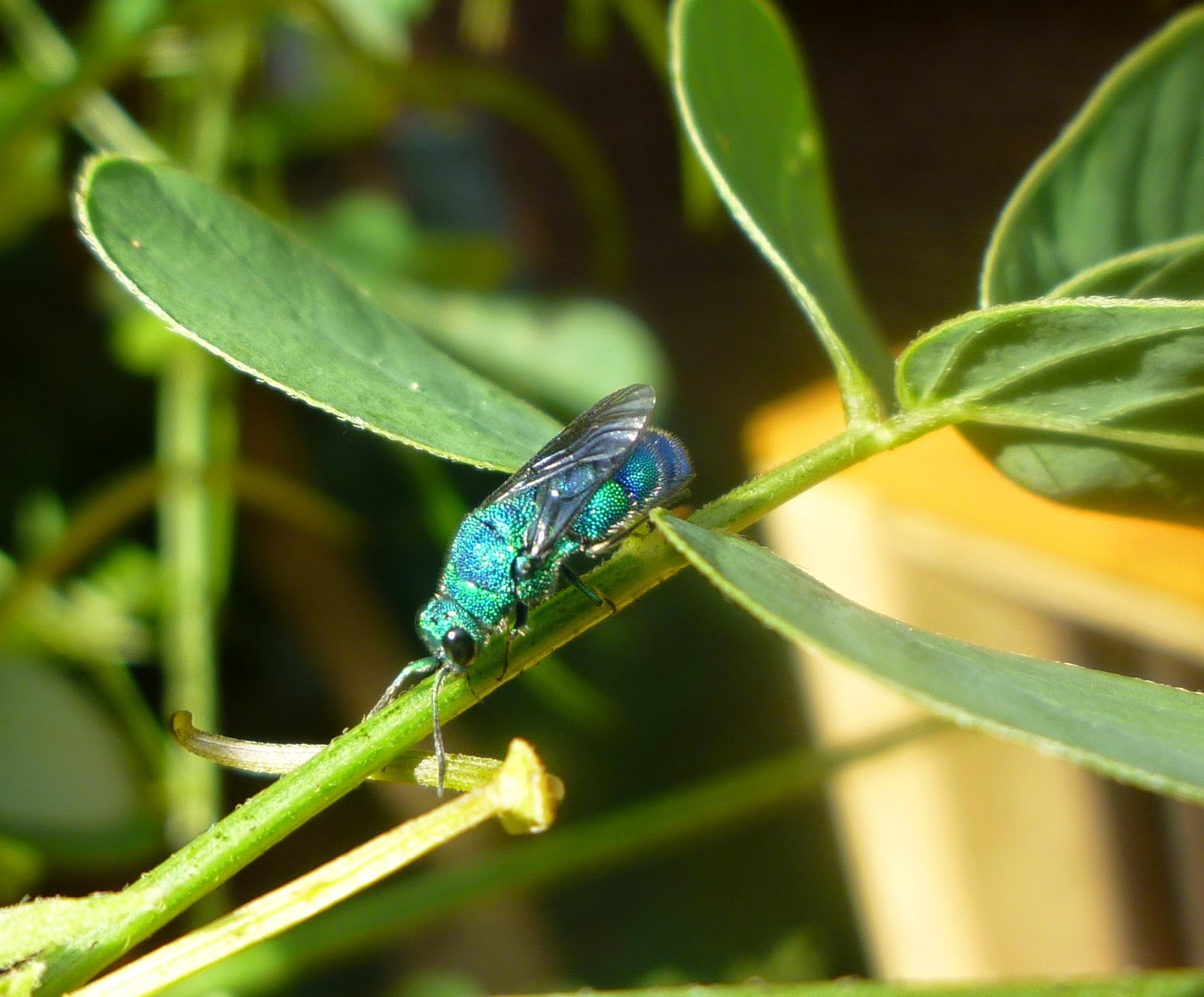 Though a bit blurry, the next three pictures helped me identify this particular species of cuckoo wasp.  One of the websites I found, www.discoverlife.org, has a search page that has an array of detailed pictures and sketches. From this site I am pretty certain that this small wasp is the species, Chrysis conica, sometimes called the Neon Cuckoo Wasp. 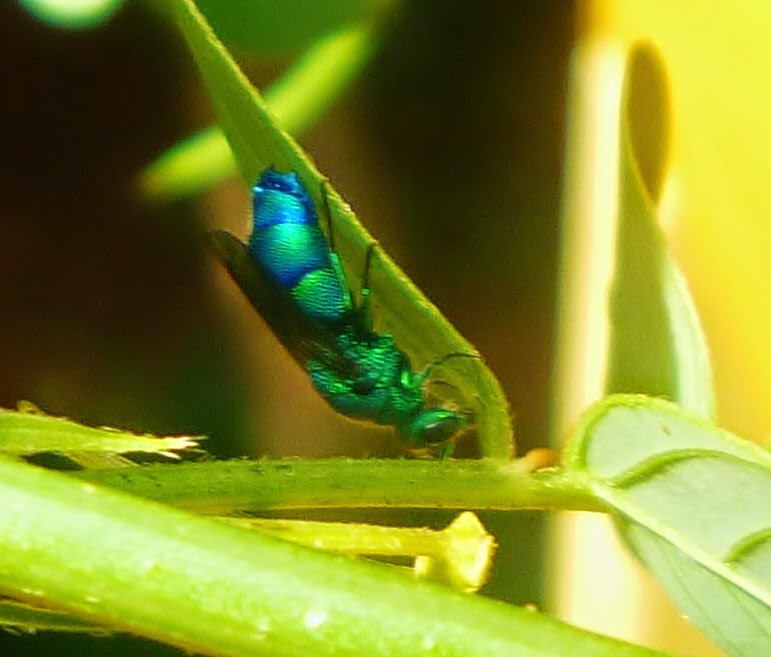 (link to discoverlife.org picture of back of abdomen detail)

(link to Bugguide.net picture of a Neon Cuckoo Wasp)

Below is a link to an awesome macro-photo of the shape of the Neon Cuckoo Wasp posterior abdomen that I found on Wikimedia Commons. 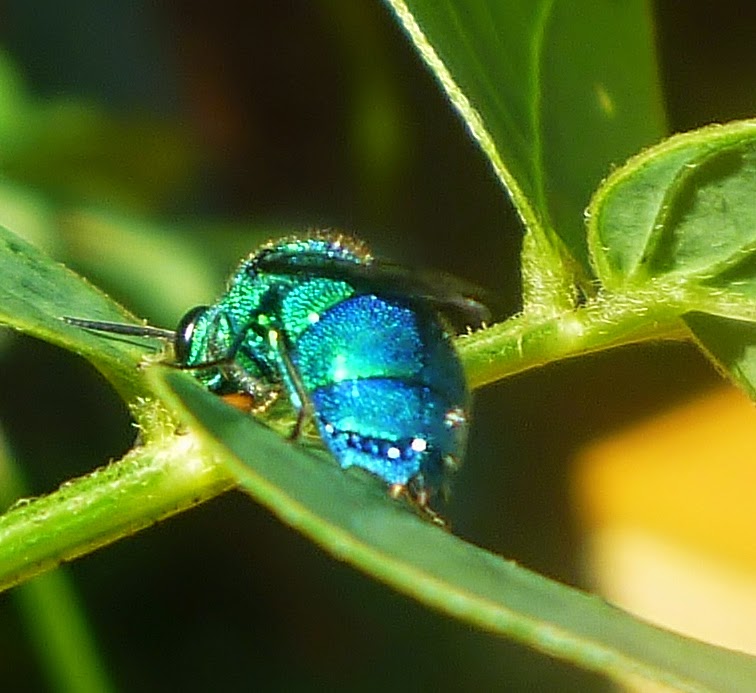 This species of cuckoo wasp typically lays its eggs in the nest of a potter wasp (Eumenes fraternus).  Potter wasps build small marble-sized mud nests which they attach to vegetation as well as to man-made structures. These nests resemble tiny clay jugs.  The potter wasp stocks each nest with several paralyzed caterpillars before laying one of her eggs. The cuckoo wasp tries to sneak in and lay her egg before the Potter wasp's nest is complete. When the cuckoo wasp egg hatches, it will feast on the Potter wasp larvae as well as the paralyzed caterpillars.

(link to Bugguide.net picture of Potter Wasp, nest, and prey)

Cuckoo Wasps have a thick and pitted exoskeleton that protects them from possible bites or stings of the host insect. In addition, these wasps are one of the few insects that can curl up into a ball like a pill bug (roly-poly) as an added form of protection as illustrated in the images from the internet below.

A curled up roly-poly

In late September I noticed a few wasps nectaring on tiny yellow flowers arranged on the plume-like fronds of the Tall Goldenrod behind the lab. These were a species of paper wasp.  These wasps make their nests from fibers that they collect from plants or dead wood. Combining their saliva with these fibers, they produce a grayish paper-like* material that is resistant to water.  The wasp queen and her helpers fashion this material into a comb-shaped cluster of six-sided open cells. The nest may contain up to 30 cells or more by the end of summer with the queen depositing one egg per cell. Common places for paper wasps to build their nests include; under the eaves of houses, in out buildings, or to undersides of tree branches.  During the summer I'd found the nests of these wasps inside two of the seven bluebird nest boxes set up around the lab's perimeter.

*There is historical evidence that the nest making of paper wasps influenced a Chinese official in 105 AD to develop the process of making paper from wood fibers.
From:  http://en.wikipedia.org/wiki/History_of_paper


(link to video about nest building)

The abdomen of the wasp below is marked with reddish brown blended with black and is ringed with a few thin bands of yellow. The legs are mostly yellow as well.  The antenna are bent and then hooked at the end.  After looking over the 22 species of paper wasps that live in North America, I believe this is probably a male Polistes dorsalis. 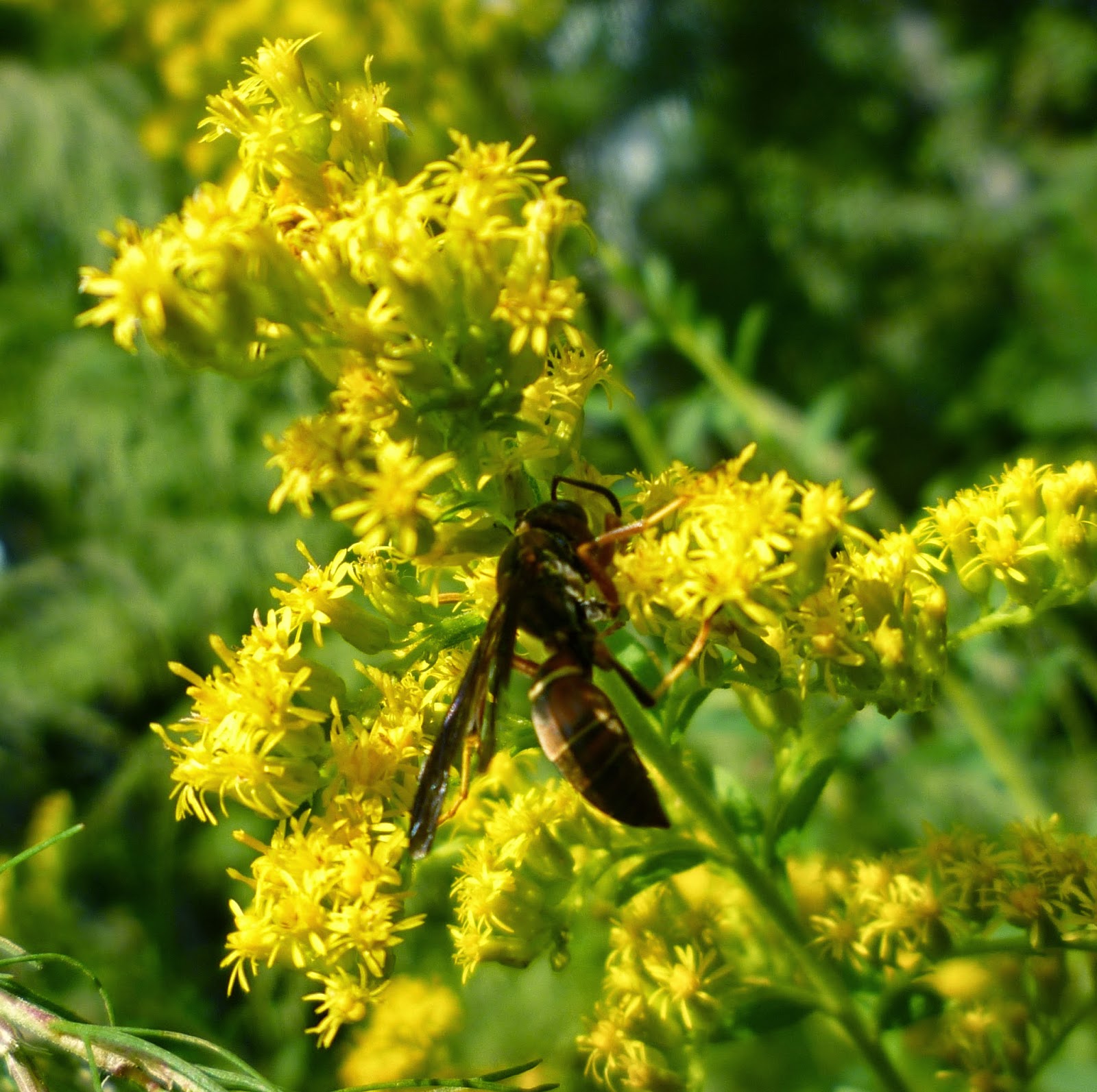 (link to University of Alberta picture of male wasp)


(link to Bugguide.net male and female paper wasps at nest)


A paper wasp colony consists of a foundress (queen), her daughters (includes non-egg laying workers plus "gynes" - next year's foundresses), and her sons (drones). Having mated with a male wasp prior to winter's onset, the foundress finds a protected place to survive the cold weather.  The cold temperatures kill the previous year's queen as well as the workers and drones. After finding a suitable location with the warmer weather of spring, the foundress begins her colony as a small nest. There she lays several eggs, one in each cell, that will become her first female workers.  She feeds and cares for these daughters. These worker wasps then help expand the colony by building more cells and taking over the duties of hunting for food and caring for the eggs and larva. The queen now focuses only on egg laying. Late in the season the queen will lay unfertilized eggs that will become drones. She will also lay some fertilized eggs that will become gynes. These females do not help care for the eggs or larva, but will mate with drones from other colonies, and will found new colonies next year.


The underside of this wasp shows more yellow.  This is more obviously a male paper wasp because of its yellow squarish face and long hooked antenna.  Males are more abundant in the late summer and early fall. 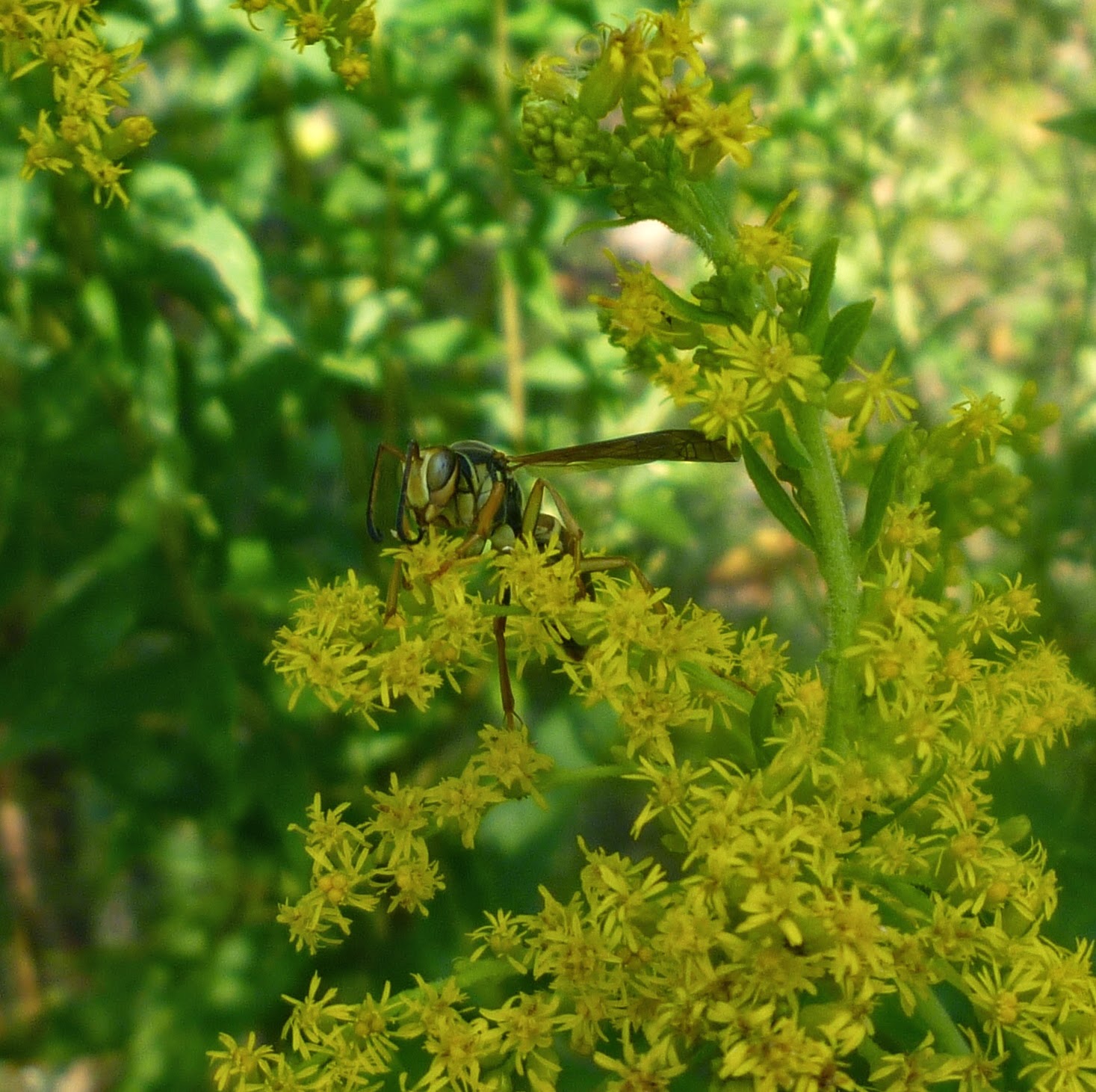 (link to Bugguide.net picture of female)

I will be looking more closely at wasps next year to see what other species are neighbors of ours.

I noticed this small flying creature at the back of the lab in early fall.  One of the most interesting thing about this insect was it behavior, especially the "oaring" motion of its wings.

One of the marks that identify this as a Picture-winged Fly are the two white triangles on the leading edge of its wings. Picture-winged flies have a bulb-like abdomen, plum-colored eyes, and their head is shaped like a horse's.  This fly's grayish abdomen is a characteristic of the female of this species, Delphinia picta.

(link to Bugguide.net picture of male and female) 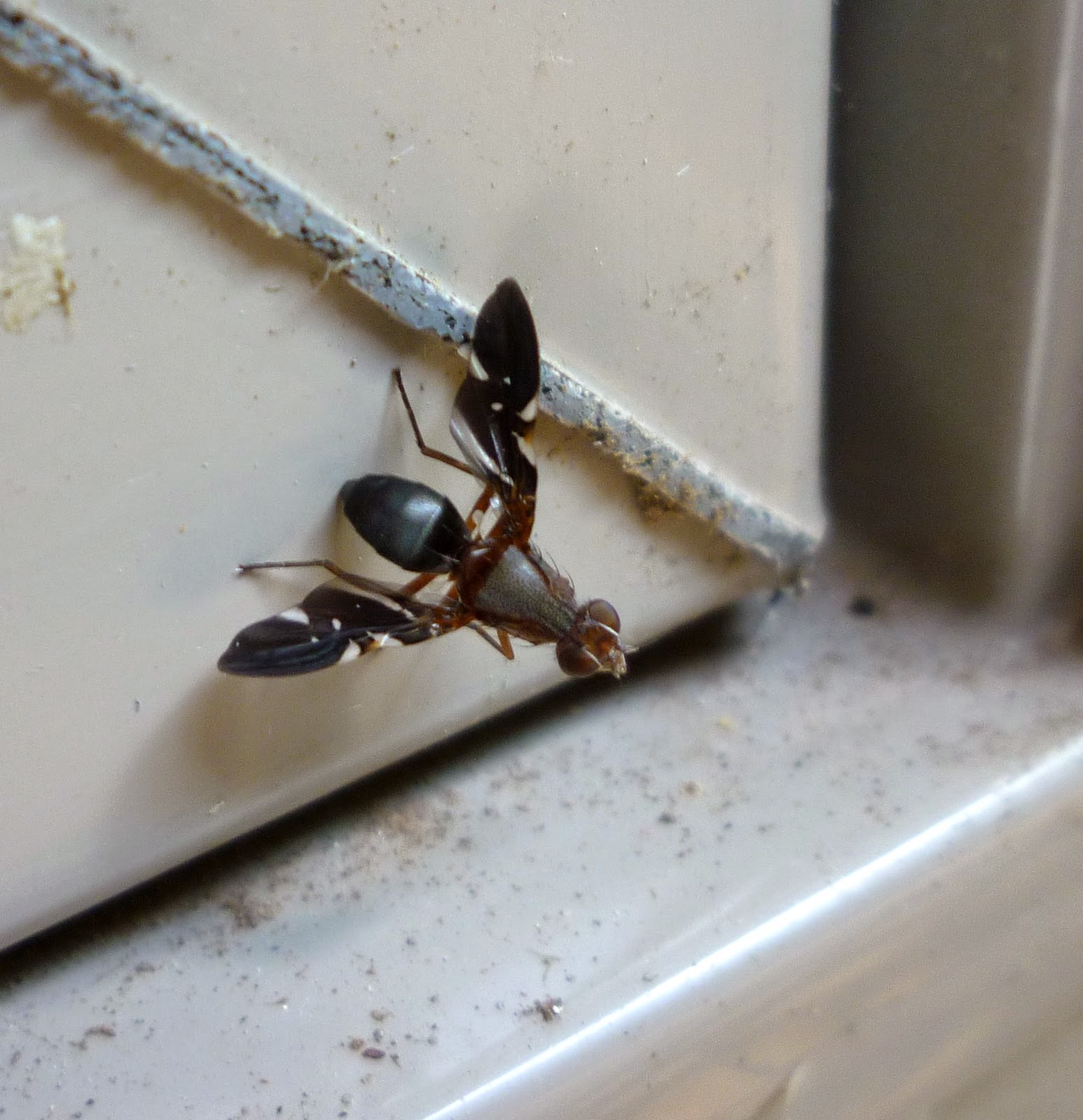 Picture-winged flies feed on decaying vegetation and rotting fallen fruit.  They are interesting and harmless creatures.  I hope I get to see more.

Back in late summer I took this picture of a black and yellow fly that looked somewhat like a bee, a wasp, or a hornet mining away for nectar in this aging Rudbeckia bloom.  This fly is from the family known as Syrphid flies (but also called Hover flies, Drone flies, or Flower flies). They are important pollinators of certain flowers. These flies have the hummingbird-like ability to hover in front of a flower on nearly invisible wings as they feed on nectar.  In fact they can fly backwards.  There are 23 species of syrphid flies in North America.  This group of hover flies has an unusual aquatic larval form known as a "rat-tailed maggot". These larva live in polluted or contaminated water and breath through a long slender tube which perhaps looks like a rat's tail.


The Larvae of the Drone Fly - aka "the Rat-tailed Maggot" 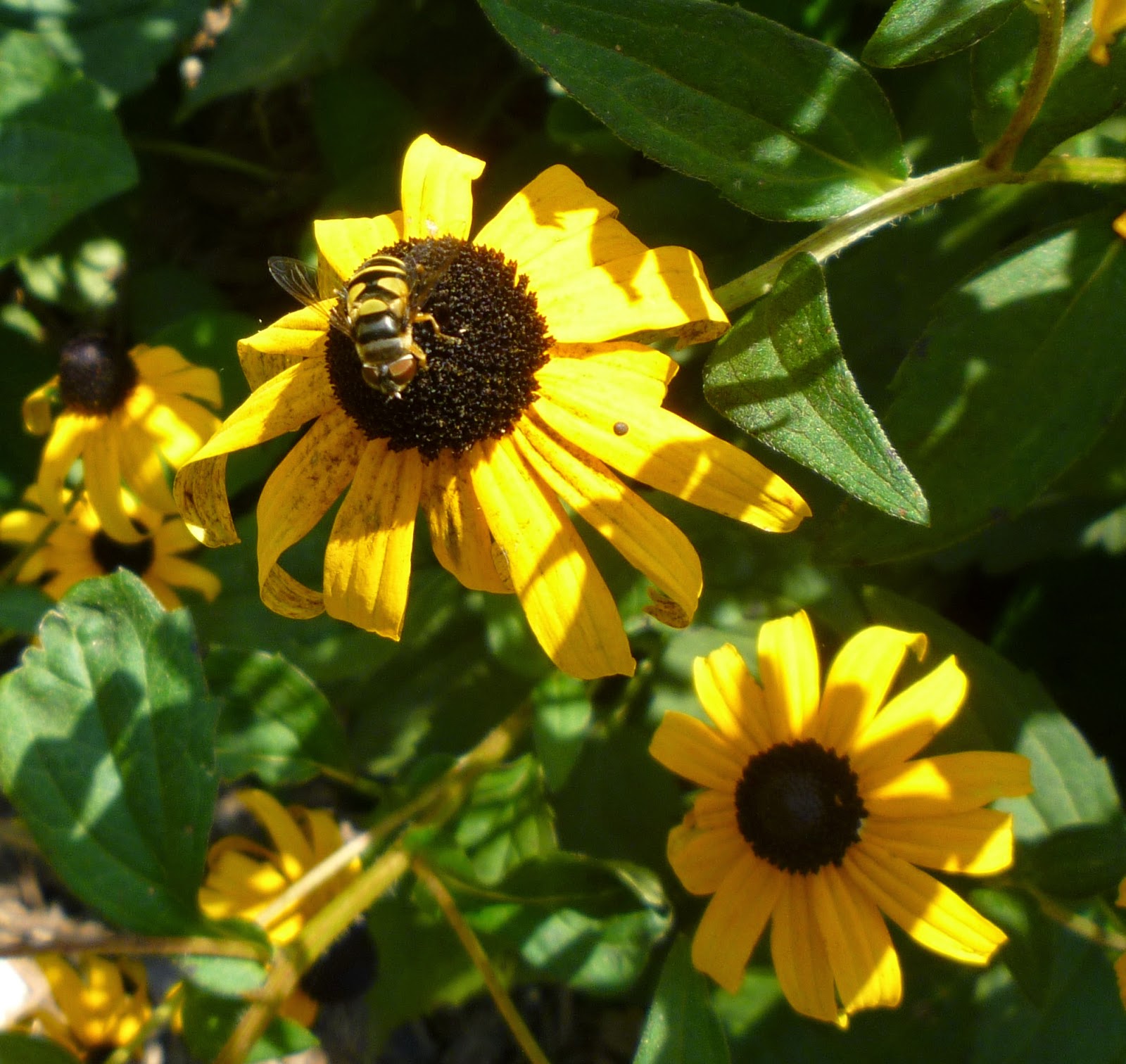 The common name for this particular fly is the Transverse Flower Fly.  The identifying marks are the gray color on the front portion of the thorax and the yellow scutellum.  This fly is a female fly which is indicated by the space between its eyes. In the fuzzy enlargement below you can see the yellow half-moon shaped structure at the top, the lighter gray front part of the thorax in the middle, and the separated eyes of the female at the bottom. 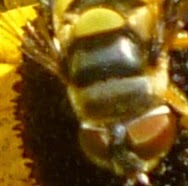 (link to Bugguide.net picture of a male hover fly)

(link to www.diptera.info/photogallery picture of a female hover fly)

My first experience with this fly was many, many years ago through my friend and colleague, Susan.  She brought me a jar with several very strange wormy-looking creatures with long stiff tails swimming about.  She told me that her son had retrieved them from a wet polluted area behind her home.  I took these odd larva to Jesse Perry at the North Carolina State Museum of Natural Sciences.  When he saw them, he happily exclaimed, "Ah, Rat-tailed Maggots!", like he had just found a long lost friend.

Below is a link to a video of rat-tailed maggots swimming.

(link to video of Rat-tailed Maggot)

I did  not realize that the word "insect" comes from the Latin words that mean "cut into sections".  The name refers to the three segments of an insect's body; the head, the thorax, and the abdomen.

Some hover fly information came from the following websites.

Posted by From Bluebirds to Turtles at 5:16 PM