Along a sidewalk in the front yard, there grows a grouping of Gumpo azaleas. Every June these two and a half foot tall, compact evergreen shrubs are covered with large, long-lasting white flowers interspersed with bright pink blossoms and a few bi-colored ones, too.  Gumpos are one of the Satsuki* hybrid azaleas developed in Japan from a cross between two varieties of Rhododendron.  Below is a picture of one of our Gumpos taken in June 2013 after a spring rain.

* The Japanese word Satsuki translates to "fifth month" because this azalea blooms in the fifth month of the Asian lunar new year.  In 2014 the fifth lunar month runs from May 29th through June 26th. 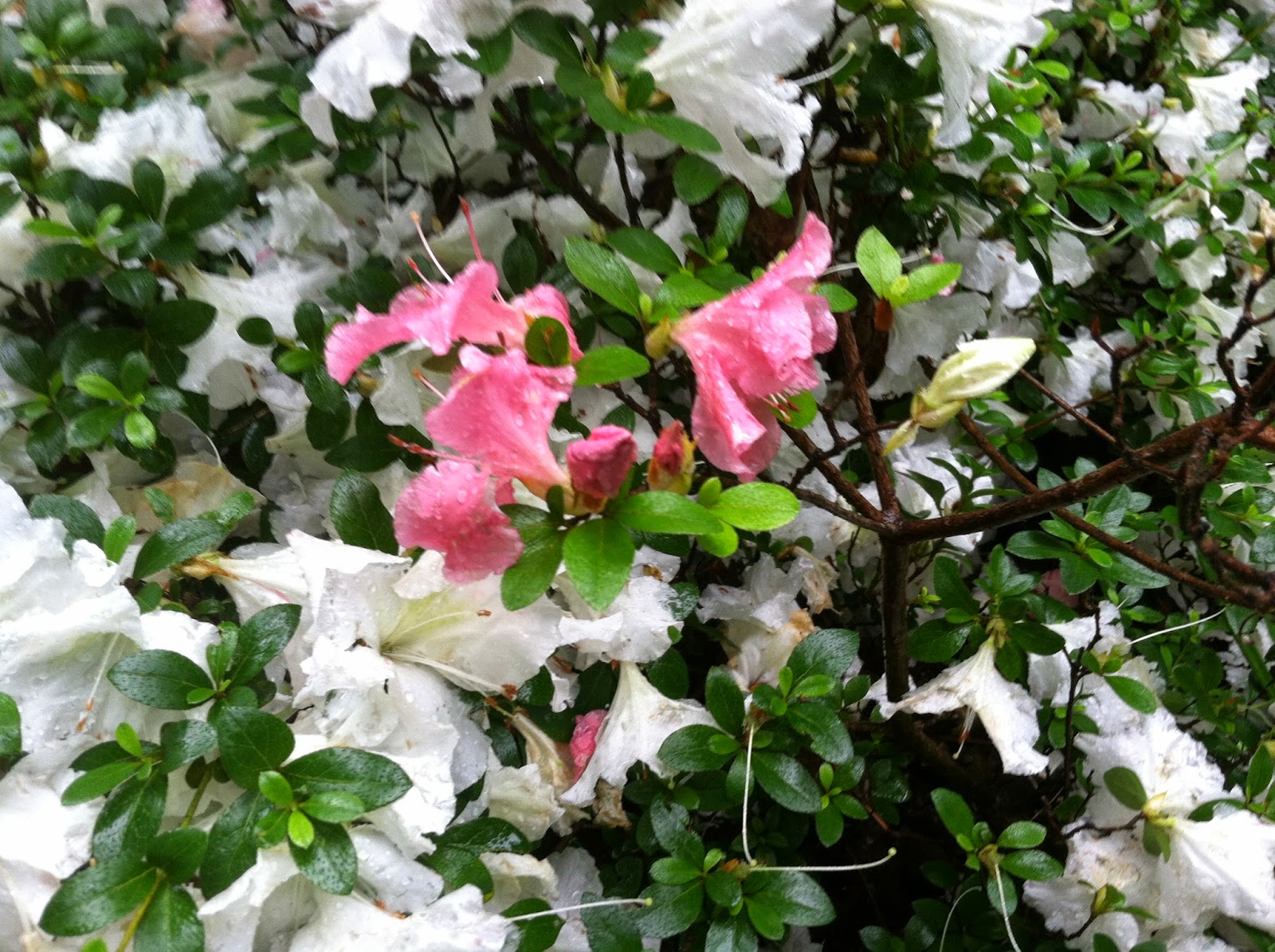 In mid September we stumbled upon a dense gathering of elegant caterpillars.  I was not aware of them at first as I inspected a few azalea twigs that were stripped of leaves. As I peered further down into the azalea, a group of nearly thirty caterpillars came into focus.  They were feeding on the leaves around the base of the branch. The caterpillars overall color was a reddish-brown mahogany with wide, bold, yellow stripes running the length of their bodies.  Long white hair-like structures sprouted from behind their heads and along their sides.  Using Bugguide.net, I discovered that these were the aptly named Azalea Caterpillars with the scientific name, Datana major. 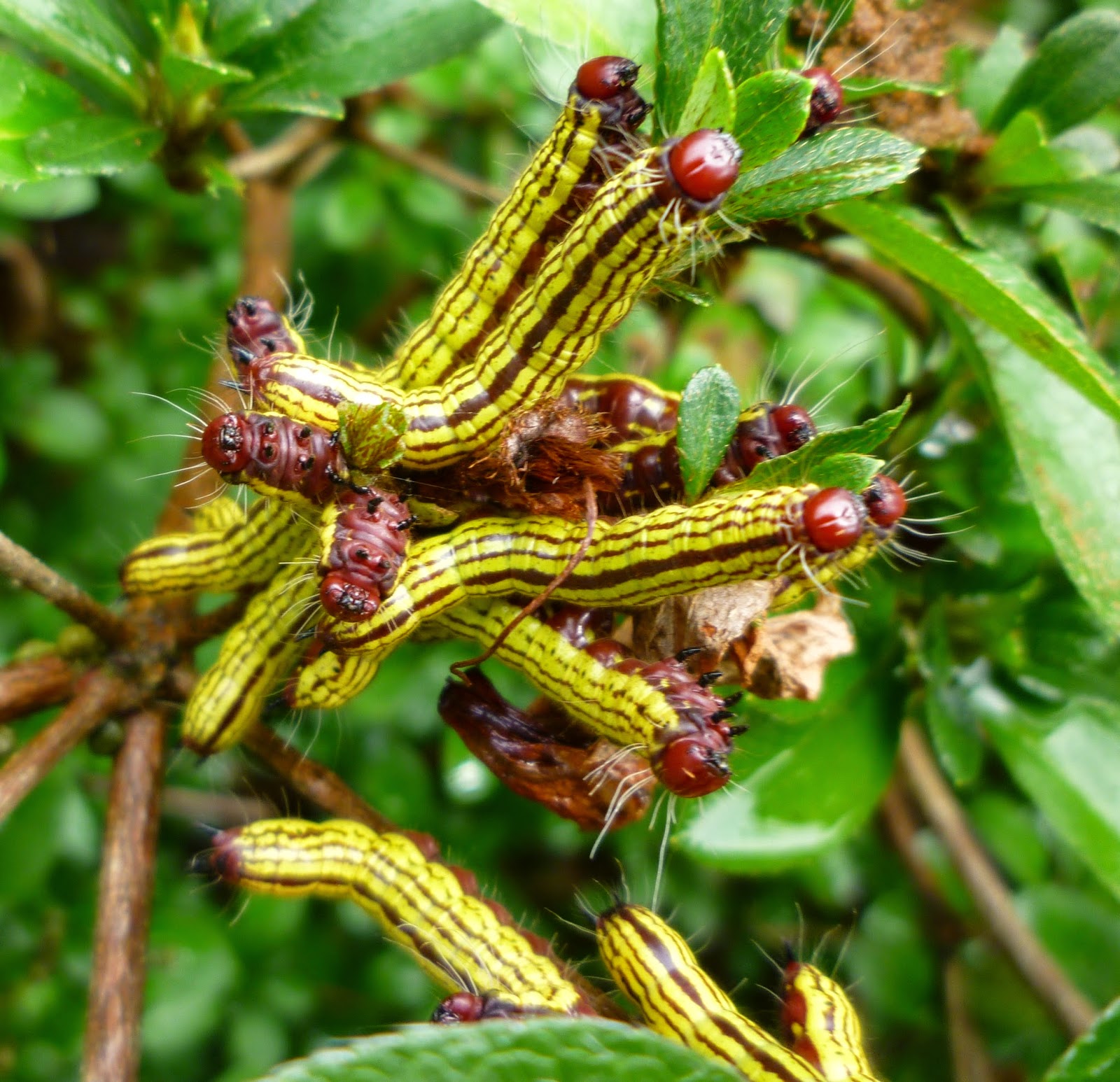 When these caterpillars were disturbed, each individual in the group arched its back into the characteristic posture you see below.   These half grown caterpillars held this pose for several minutes until the perceived danger had past. 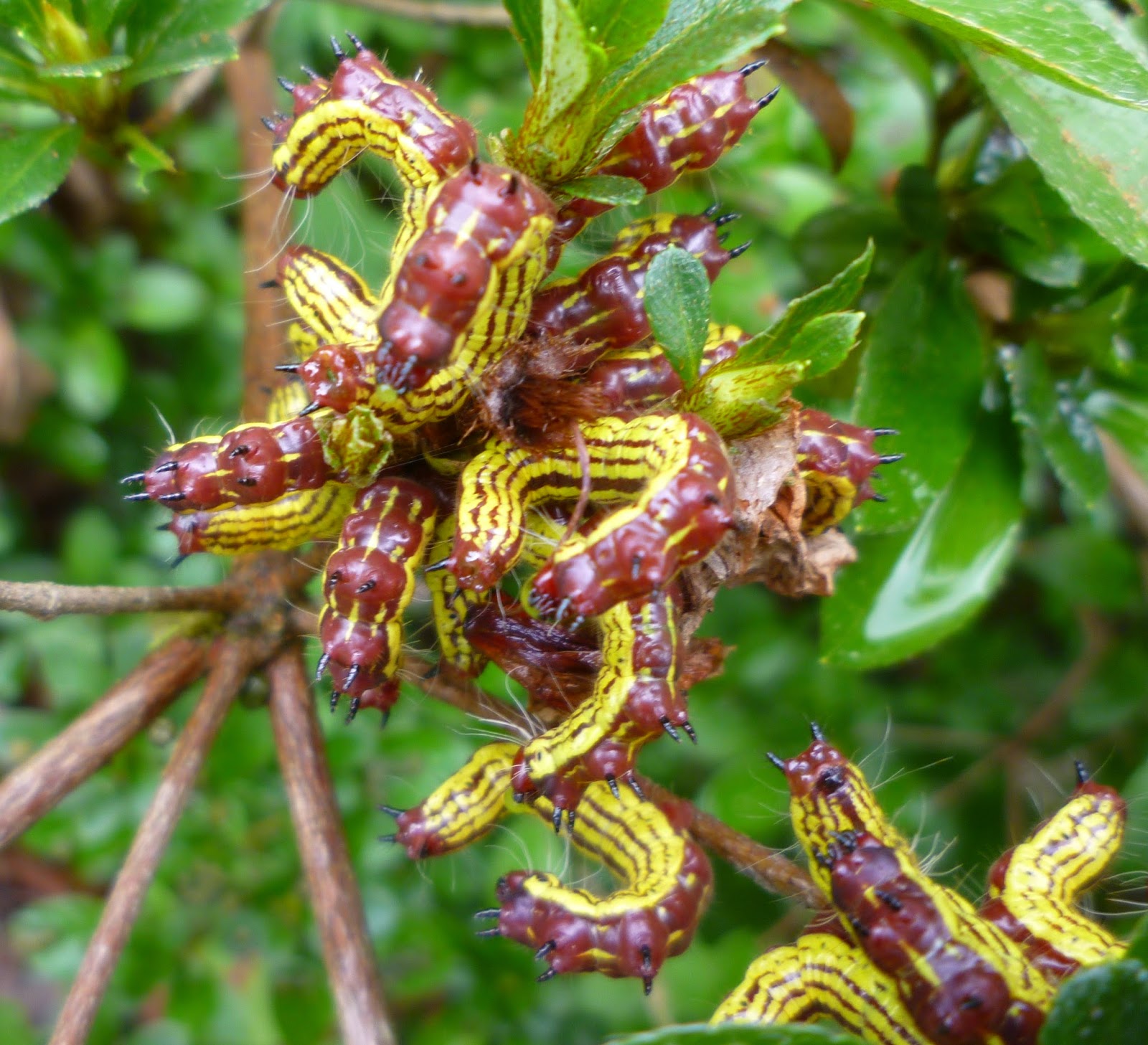 In late September the normally June blooming Gumpos put out more buds.  The Azalea Caterpillars spread out and were nearing maturity, but their leaf munching seemed to have left only small areas of localized damage to the azaleas.  The caterpillars retained their mahogany head and tail color, but their body color had turned jet black.  Their broad yellow stripes became broken yellow lines fit for some long straight stretch of two-lane highway in rural America.
(link to national safety commission handbook) 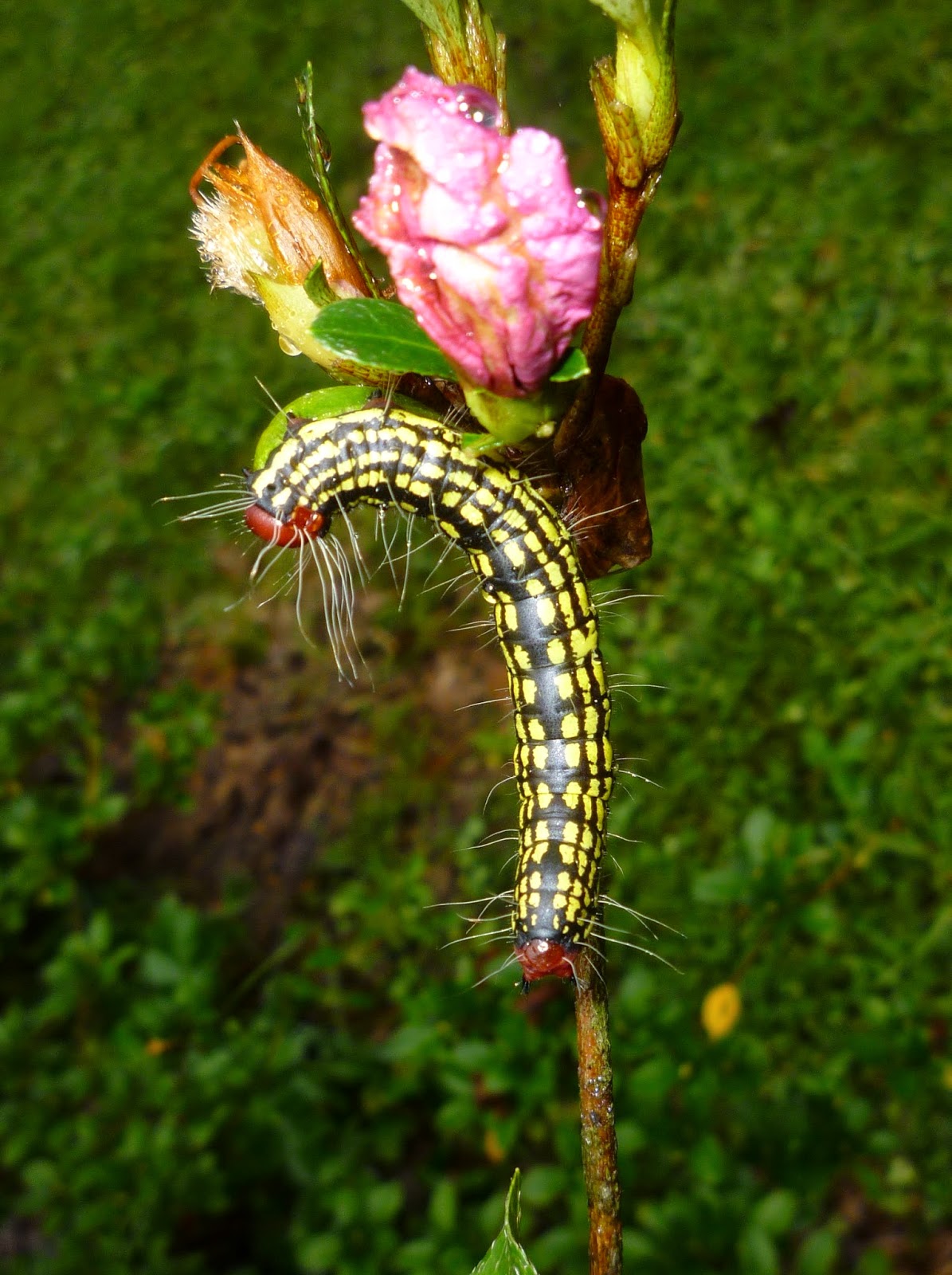 And of course when I picked up this mature caterpillar, it immediately assumed its innate defensive posture that several species use. 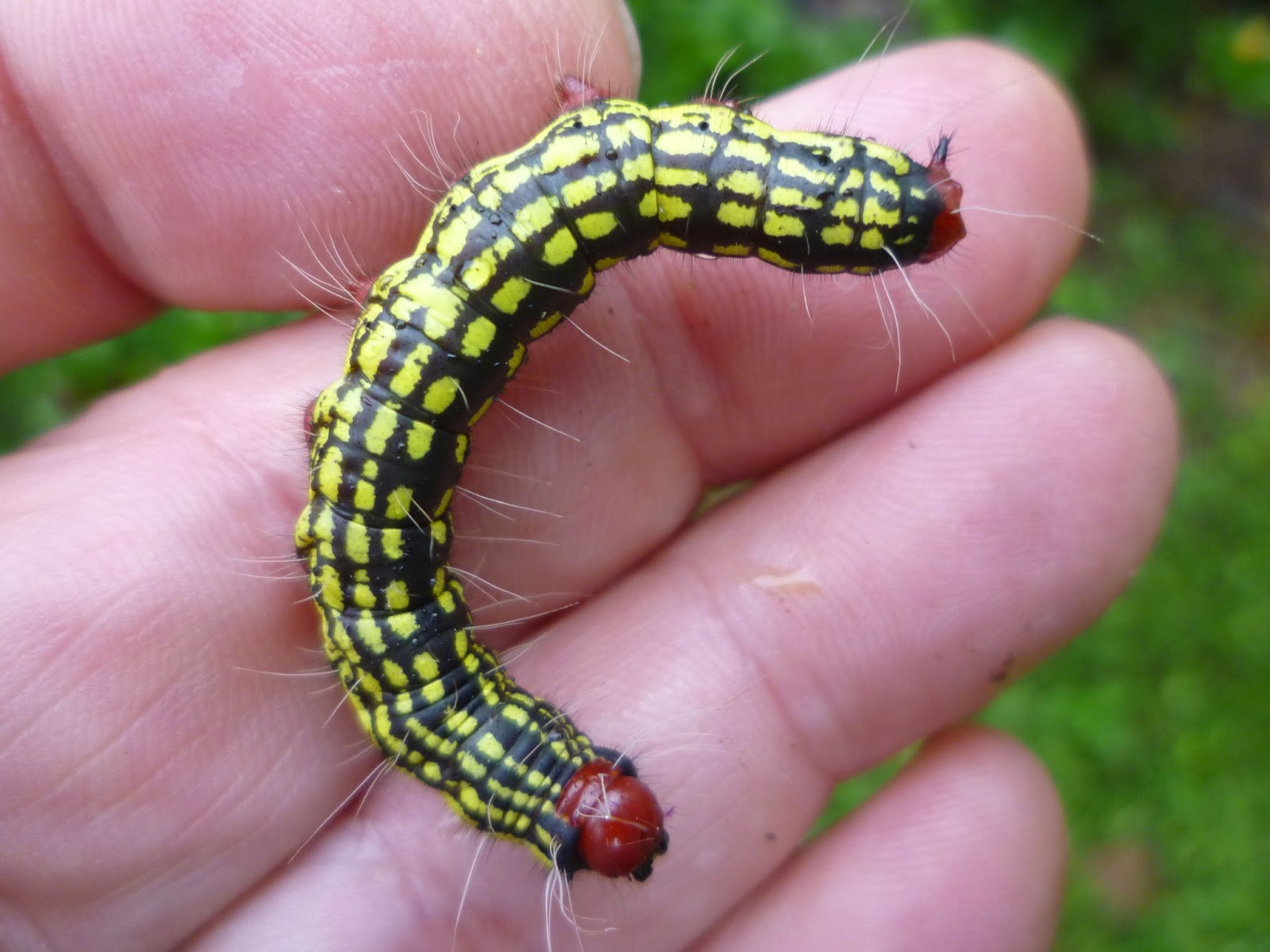 This caterpillar will transform into a pupa that will overwinter in the soil nearby.  Late next Spring the adult moth will emerge and after mating will lay eggs on host plants which include many varieties in the azalea / rhododendron family. Below is a cellphone picture of a Datana Moth, the adult form of the Azalea caterpillar, that Grammy found at Campbell University in August 2013. 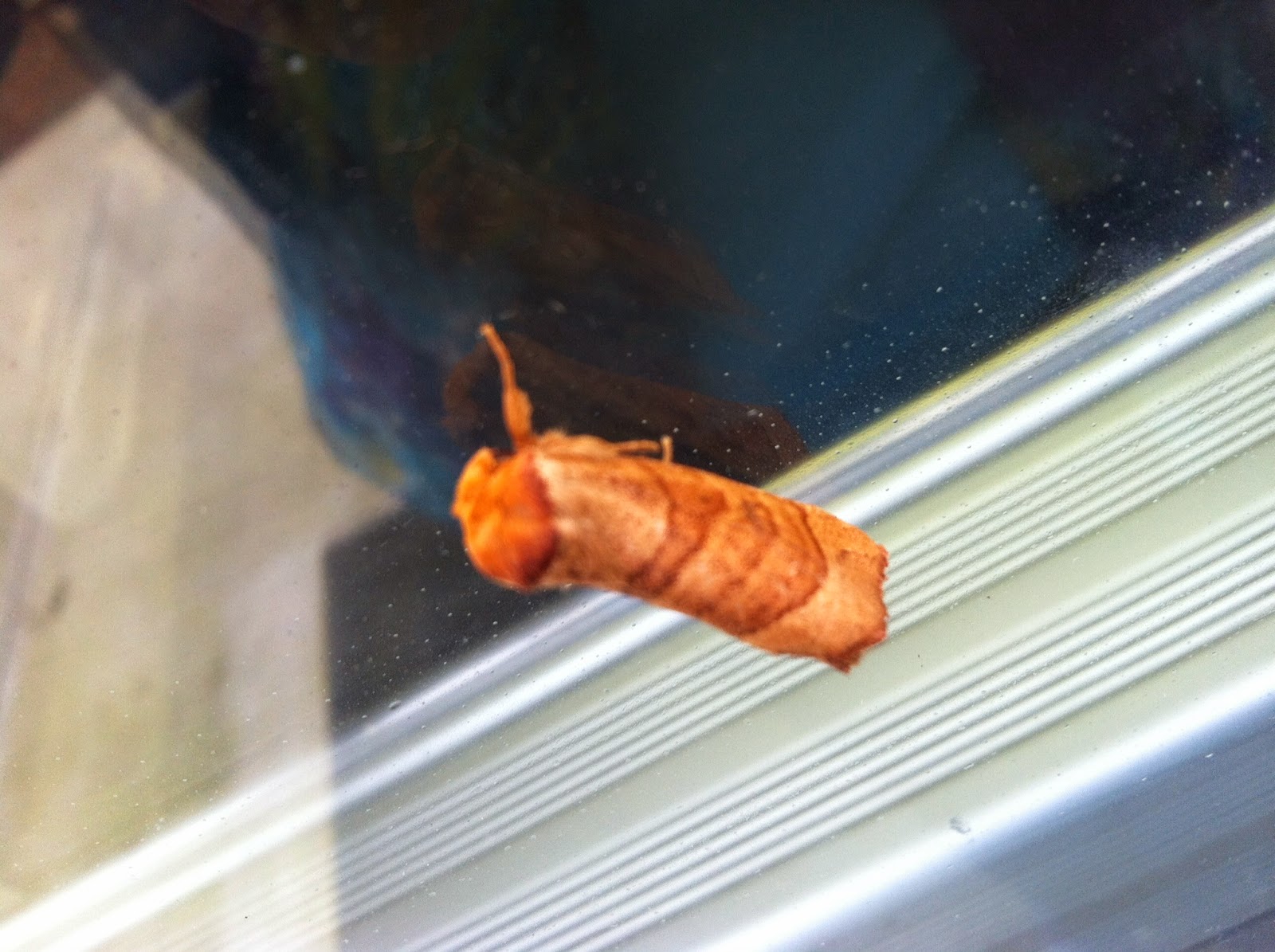 On November 6th I found this freshly opened Fashion azalea bloom near the house. This azalea bloomed earlier this year at the expected time of late April to early May, like a number of other azaleas in the yard. I've not seen this happen before. I wonder how this year's second blooming will effect next Spring's flowering, since these shrubs normally set buds in late summer for the blooms that appear next Spring. 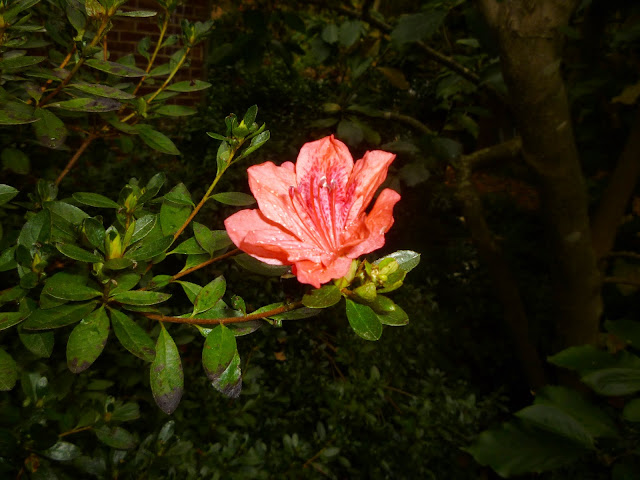 Posted by From Bluebirds to Turtles at 10:24 PM