Earlier this summer I added a couple bronze fennel plants to the front yard with the hope that Black Swallowtail Butterflies would find them an attractive place to lay their eggs.  By mid summer I found this young caterpillar and several companions roaming about on the stalks of the fennel plants. This young caterpillar is protected from predators to some extent by its coloration which mimics the appearance of a bird-dropping. 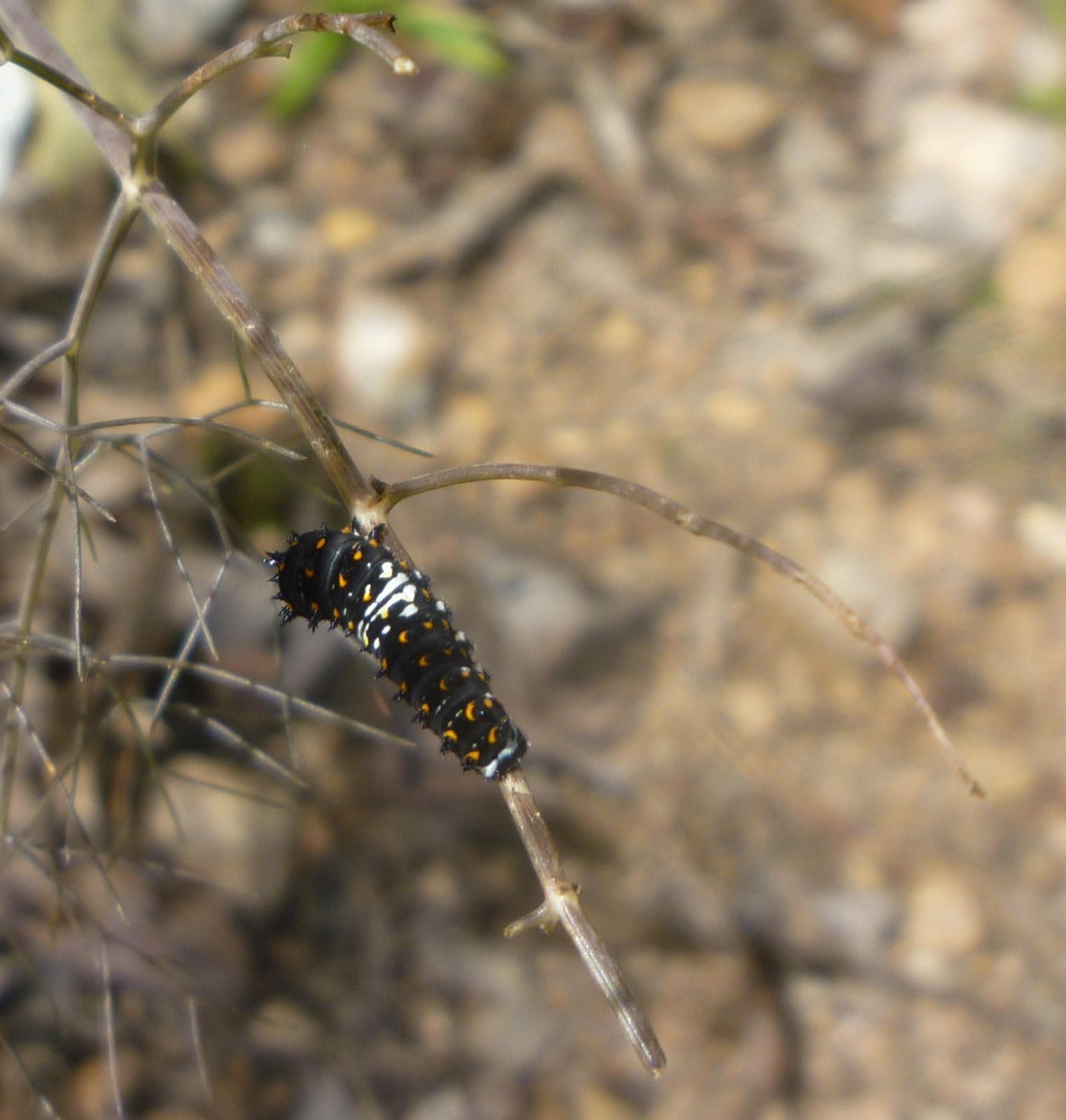 This second instar caterpillar was happily munching away on the fennel.   Black Swallowtail caterpillars are particularly fond of plants in the Carrot/Parsley family. These plants include dill, carrots, Queen Anne's Lace (wild carrot), celery, parsley, cilantro, and anise among others. 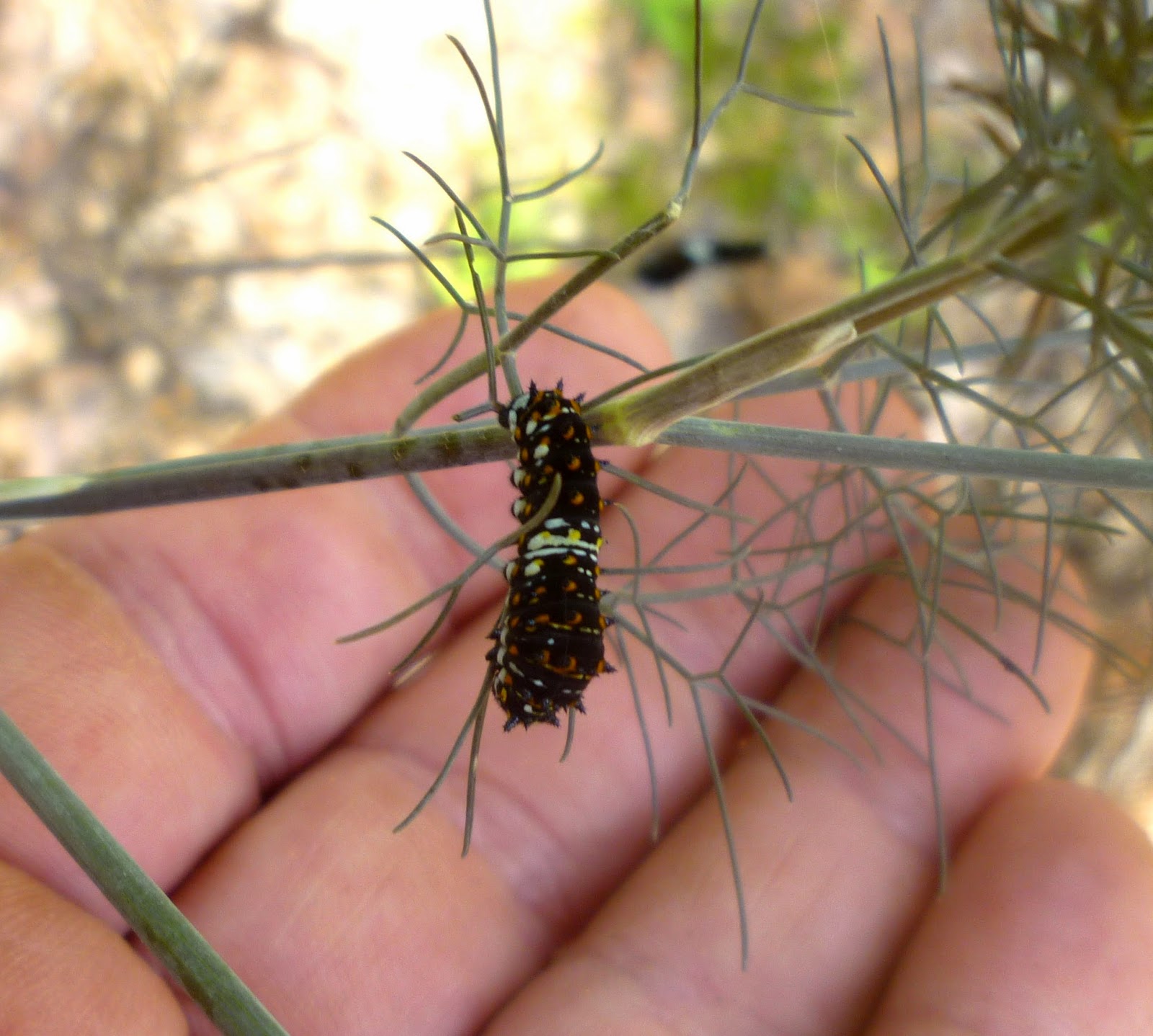 Over the next few weeks the caterpillars continued to feed on the tender leaves of the fennel plants.  By then these handsome butterfly larvae were brightly striped with black, green, and white, and prominently spotted with yellow.  This is known as their fifth or final instar. 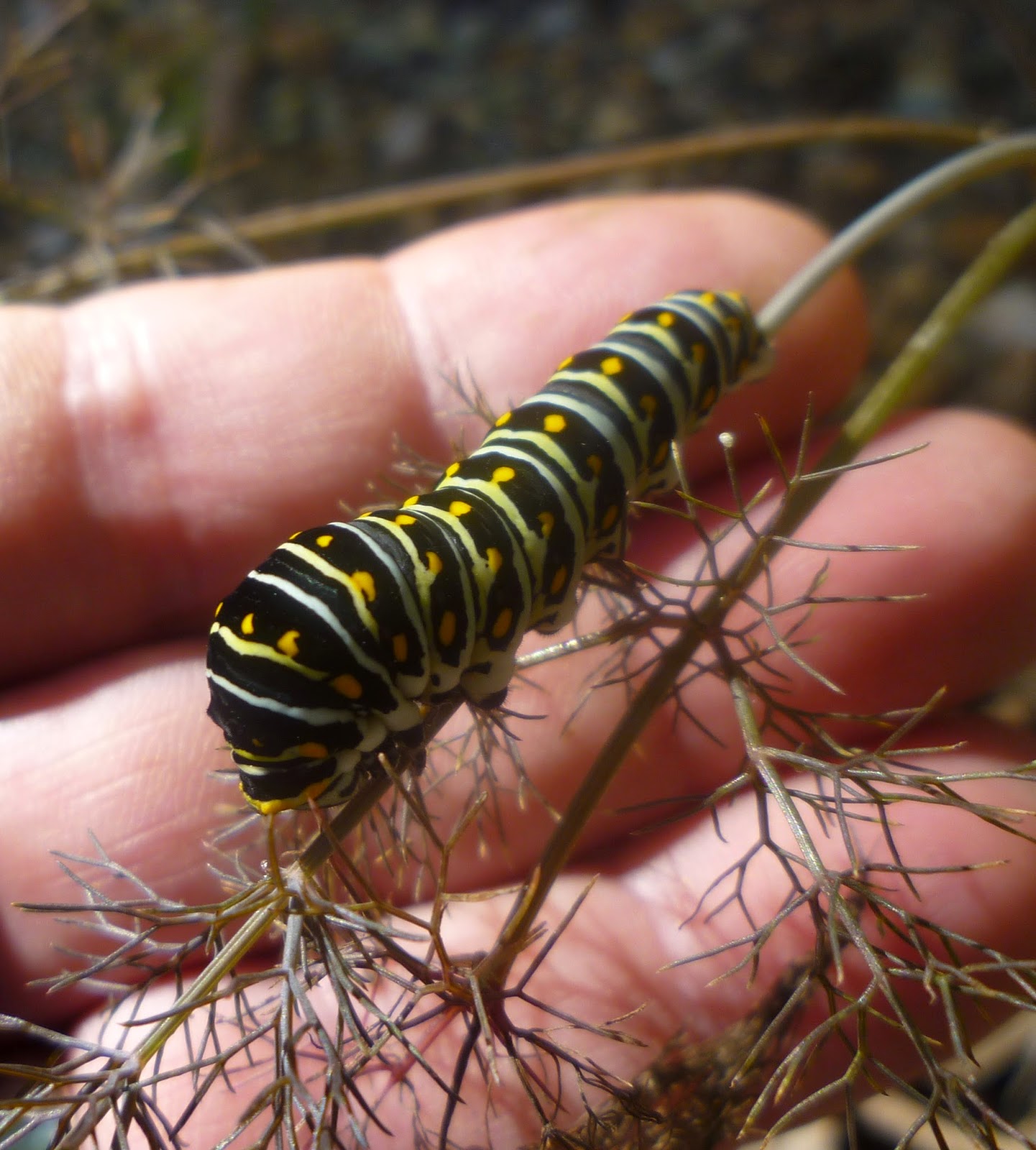 Below is a view of the underside of a caterpillar latched onto a stalk of fennel.  At the upper left you can see the three pairs of very small thoracic true legs.  These legs have five segments with hooks at the end which are used for grasping food. The true leg pairs are called the forelegs, the midlegs, and the hindlegs.  About half way down the larvae, the caterpillar is clasping the stalk with four pairs of abdominal prolegs. The ends of these pudgy leg-like structures are covered with tiny Velcro-like hooks called crochets that help secure the caterpillar to the twig or stalk on which it is crawling.  At the lower left is a pair of anal prolegs or claspers that are also covered with tiny hooks.
I've added a diagram below that I found on the internet which better illustrates the details of the caterpillar legs. 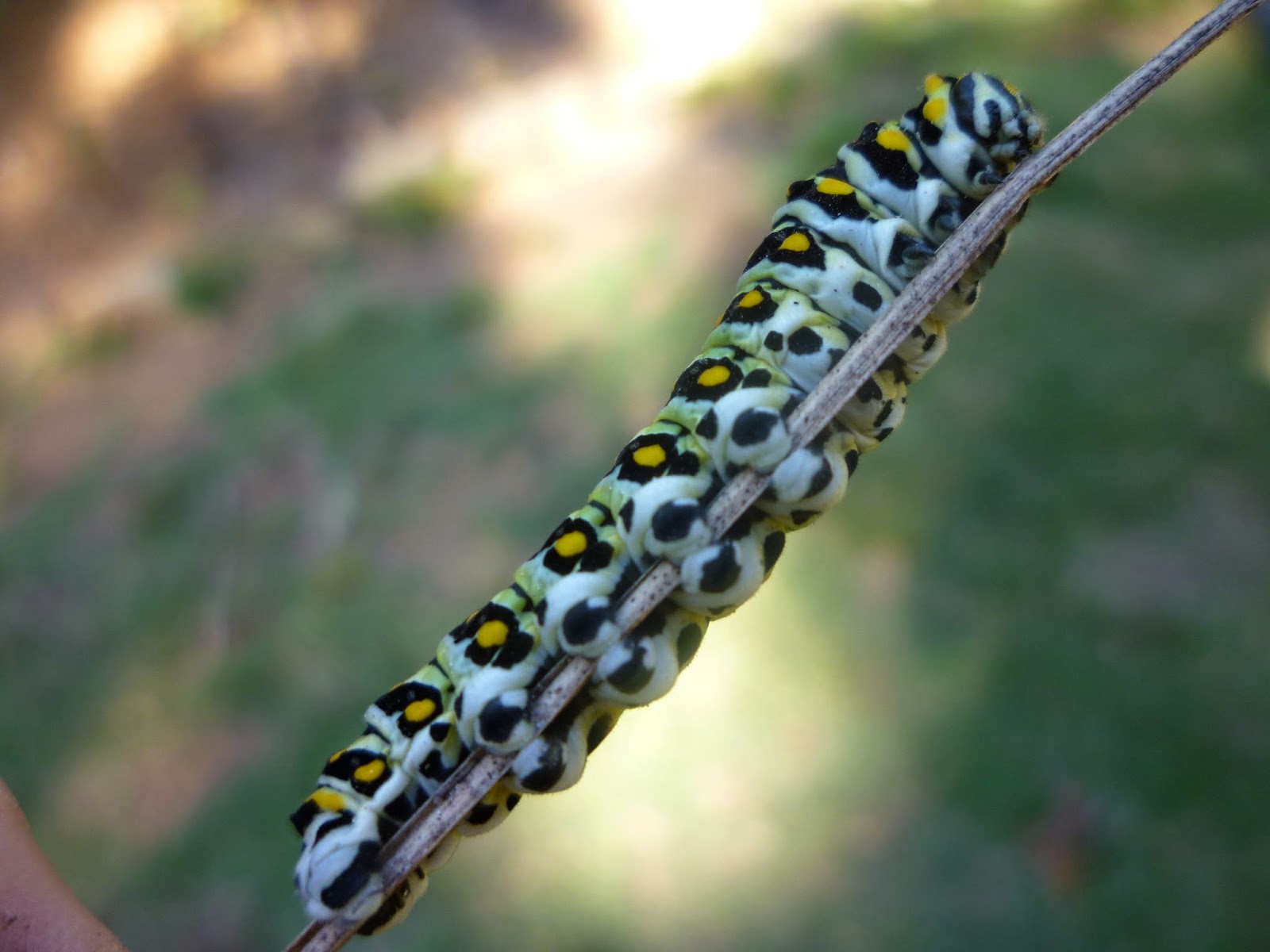 At the left of this picture is a better view of the three small pairs of jointed thoracic legs. 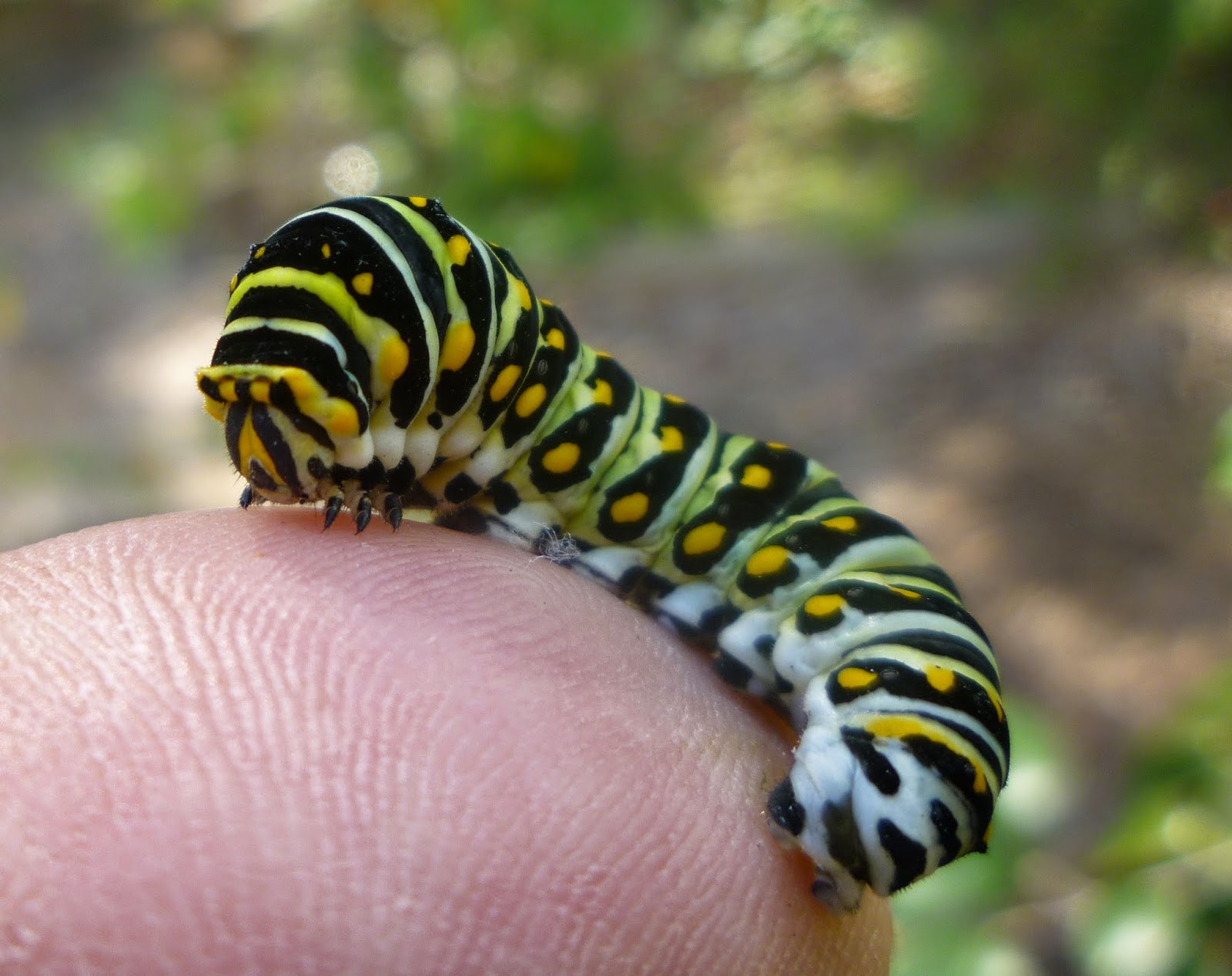 Three years ago I found this Black Swallowtail caterpillar at Big Pa's house.  When I gently nudged it, I was greeted by its bright orange, V-shaped osmeterium.  This organ is thought to provide some protection to the caterpillar.  When it feels threatened, the caterpillar releases a chemical odor from the osmeterium that is somewhat objectionable to potential predators. 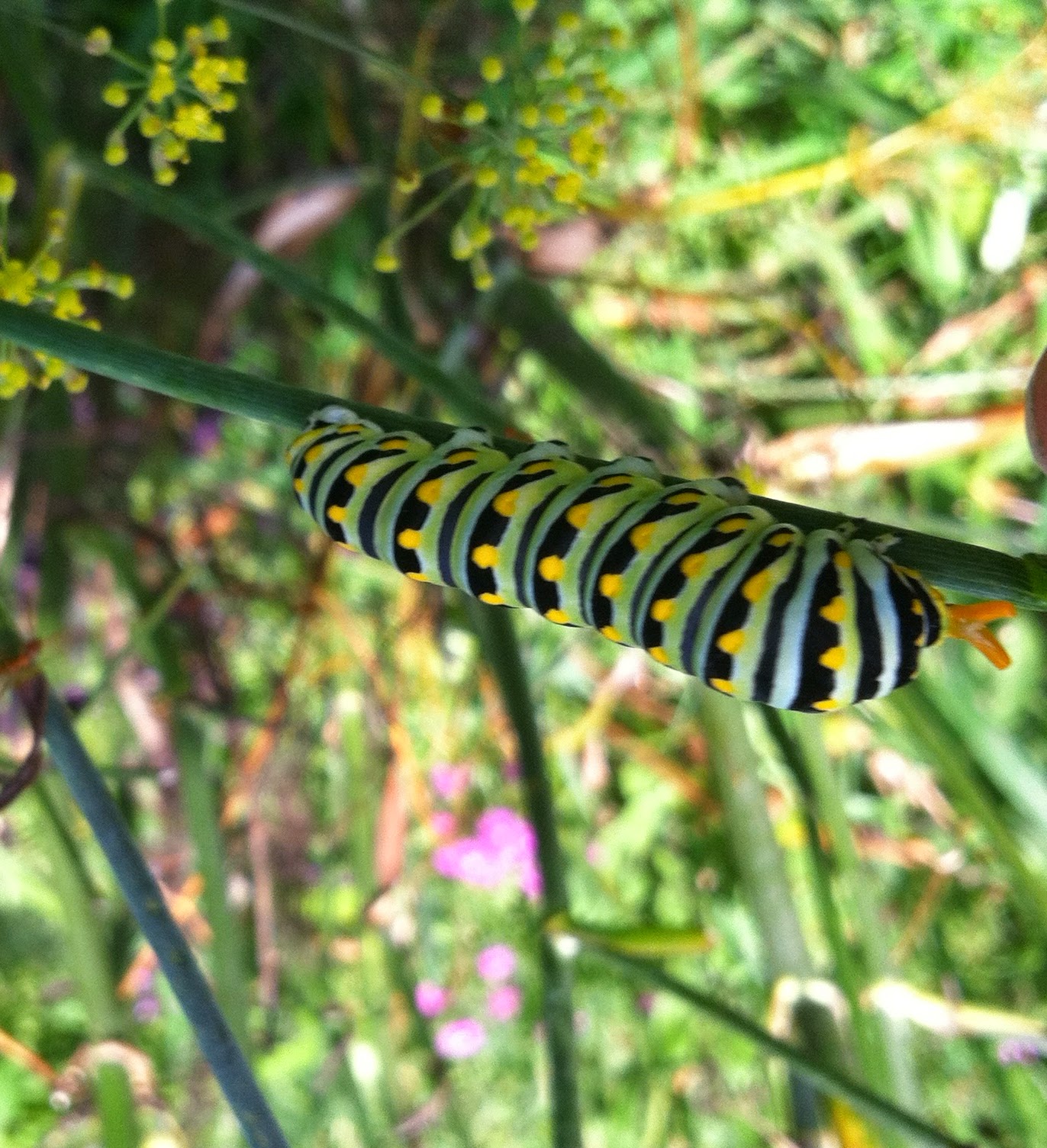 (link to a close-up of an osmeterium)


Two years ago, my good friend and colleague, Michele, and I raised several Black Swallowtail caterpillars that I collected from fennel that Grammy and I grew in a planter on the deck. Every few days, we supplied the caterpillars with fresh organically grown carrot and fennel tops to munch on. 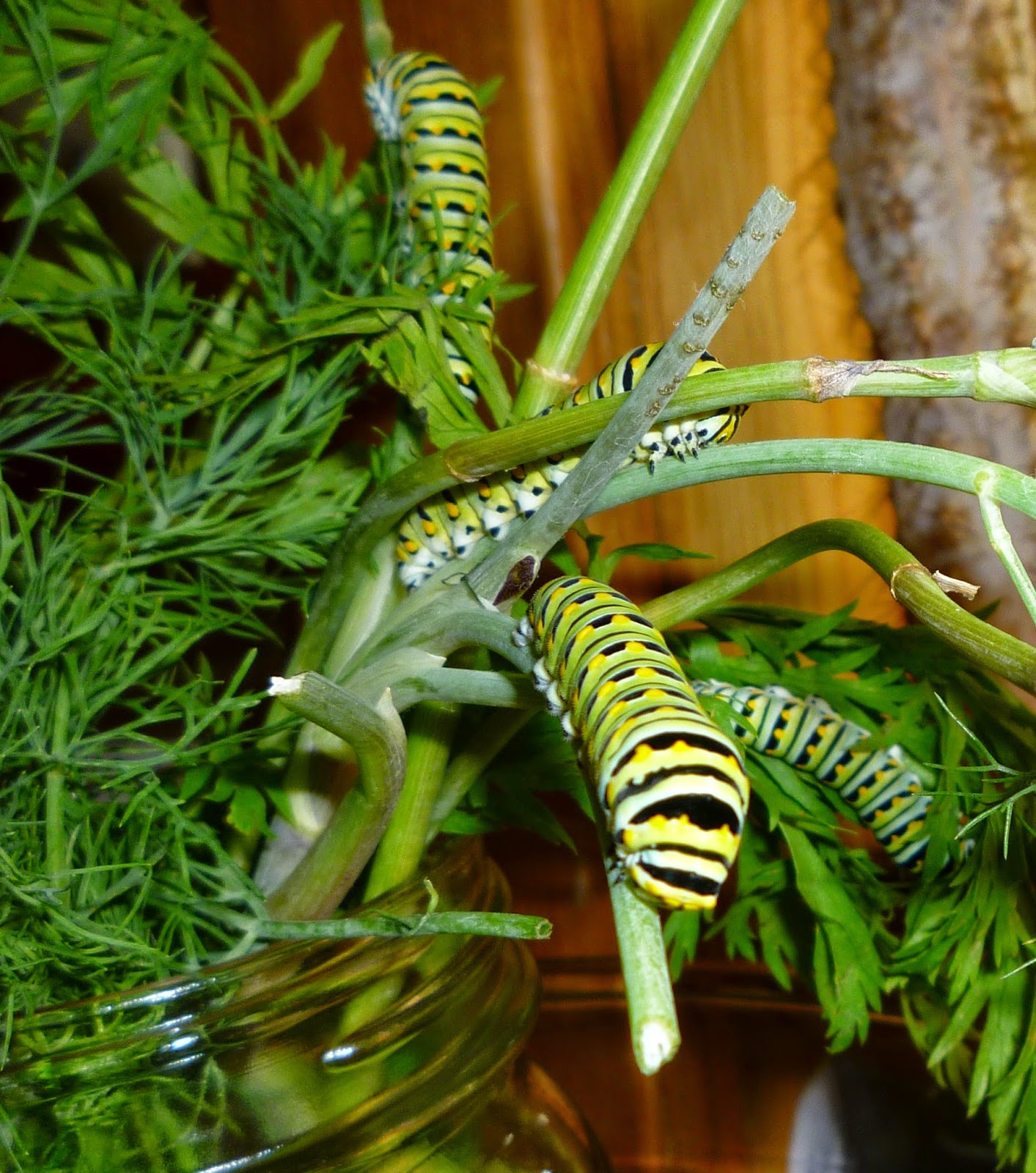 Below is a picture of the Black Swallowtail's chrysalis.  At the bottom (and out of view) the caterpillar has made a silk pad on the side of the container.  The two anal prolegs have transformed into a structure called a cremaster that is covered by microscopic hooks (again, very much like Velcro) which it thrusts into the silk pad to secure itself to the surface. At the top, the caterpillar makes another silk pad to which it attaches the thin silk girdle that you can see supporting the upper body of the transforming caterpillar.  I have added links below that show a series of pictures that more clearly describe this process. 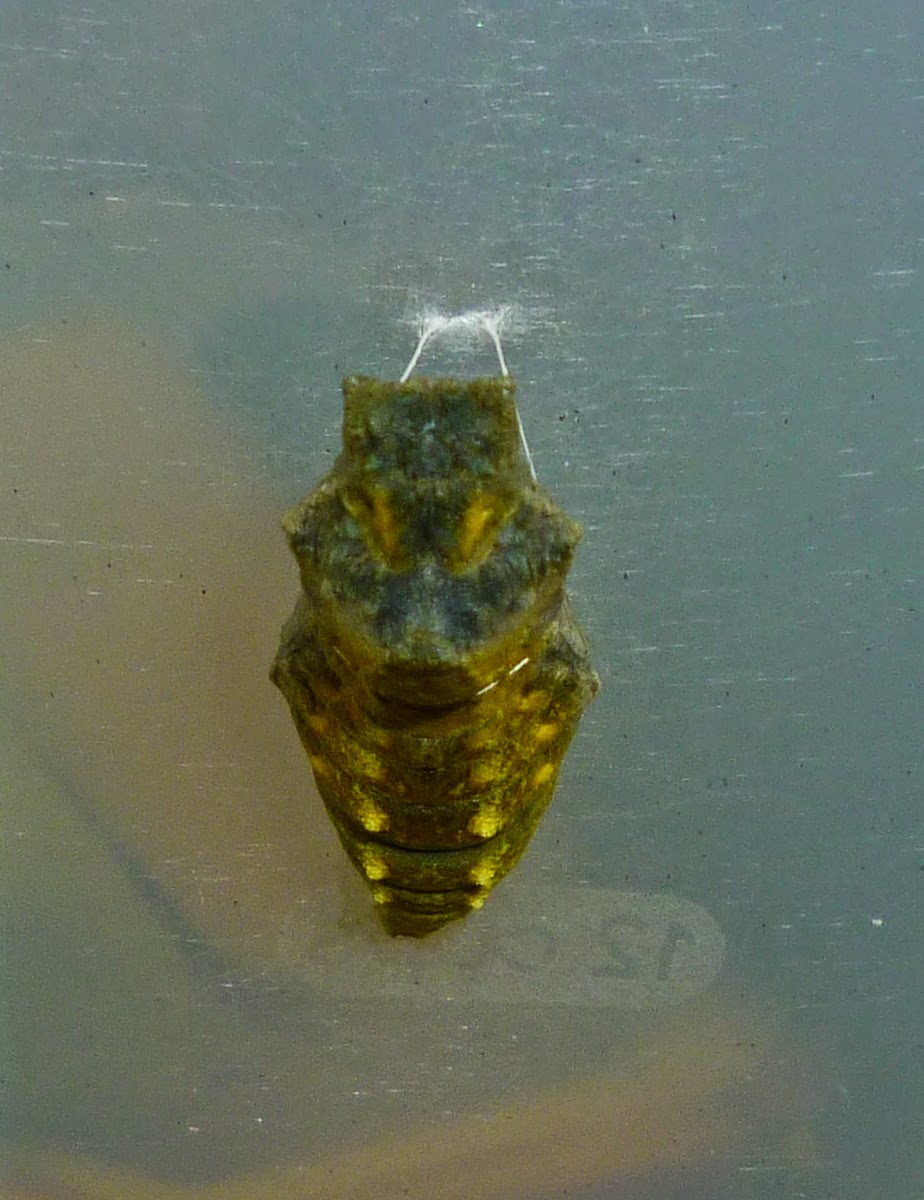 There are several species of small parasitic wasps and flies that lay their eggs on the Black Swallowtail caterpillars.

Often these parasitoids find the caterpillars by detecting the particular scent of the caterpillar's poo (also called fecal pellets or frass).  Like some other caterpillars, Black Swallowtail caterpillars actually use their mandibles (jaws) to grab and then fling their frass away from themselves.  This makes it harder for the parasitic wasps and flies to locate the caterpillars.

Although several chrysalises formed, and perhaps due partly to parasites, we did not have great success with the butterflies emerging.  Below is a link to more information about the Black Swallowtail including its life cycle.


(link to pictures of male and female Black Swallowtail Butterflies)

Some of this information came from: http://edis.ifas.ufl.edu/pdffiles/IN/IN90600.pdf

Posted by From Bluebirds to Turtles at 7:51 AM