An American Lady, a Green Lacewing, a Crane Fly with "Guests", and a Scutigera


I have gotten way behind on the blogging side of life.  I have to attribute much of that to falling under the spell of Facebook's two-toned notification alert telling me that someone is "liking" or "commenting on" some photo I posted there (like this).  I guess I have been grabbed by that instant gratification, however brief, that comes with knowing that someone has responded to a photo that I took.  That's the way we amateurs roll!

Added to this distraction was my wife's departure for the United Kingdom for a month long adventure as an instructor for a Campbell University student who was taking a British Children's Literature summer course.  More on that in a later post.

As I left the lab to pick up my American Lady and deliver her to the airport that day, I came across another American Lady.  Of course, in order to realize this, I had to search Google first for an identification.  It seemed appropriate that this butterfly presented itself on my wife's travel day.


The American Lady Butterfly (also called American Lady Painted Butterfly) is found across much of the US, but this one individual was a first for me.  The underside of the hind-wing has two large eye spots (or ocelli).  There is a large patch of orange and an overall feel of looking at a stained glass window.  The antennae have ends that remind me of cotton swabs.  The upper wings of this butterfly look much different as you can see in this (link) to Wikipedia.

I further learned from Bugguide that the caterpillars of this species feed in a weblike nest that they construct on just a few plant species which includes Pussytoes (Antennaria plantaginifolia) (link). 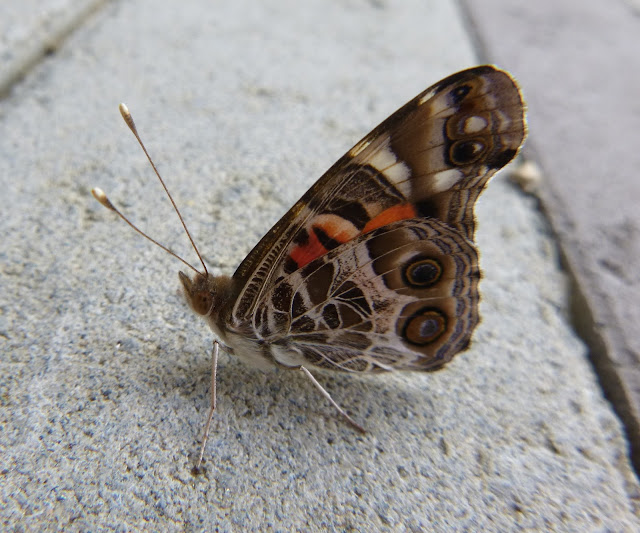 Shortly after my wife's departure for the United Kingdom, I began taking photos of insects at night by the porch lights. One of the first photos I took was of this Green Lacewing.  Its delicate and transparent wings reveal its abdomen underneath.  So this insect might look delicate, but its larvae are voracious predators that feed on the eggs and nymphs of insects like aphids, whitefly, mealybugs, and leaf-hoppers as well as spider mites.

(link to larva in Wikipedia) 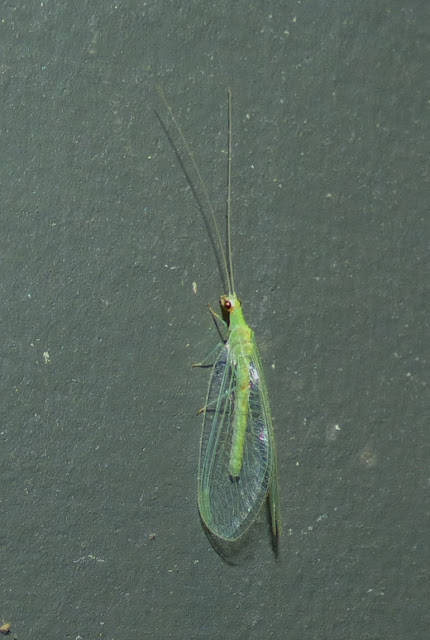 
Another visitor to the porch light was this individual from a species of Large Crane Fly.  As I zoomed in on the digital photo in preparation to crop it, I noticed tiny red objects around the crane fly's head and thorax. 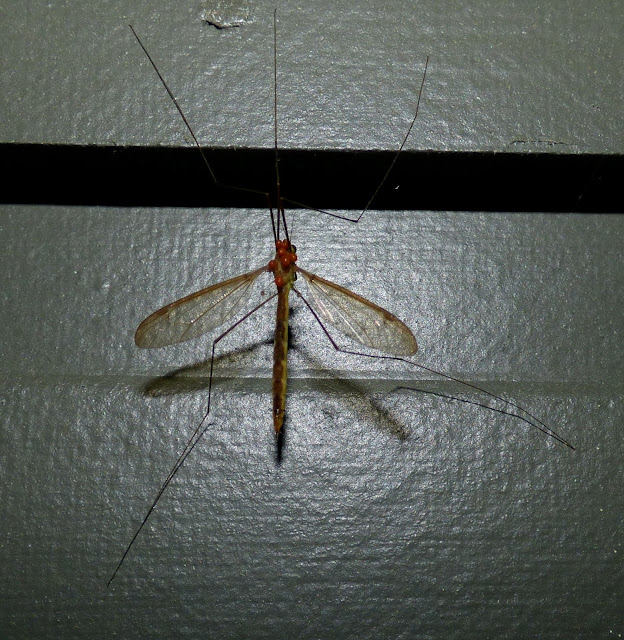 As I zoomed in closer I could see that this crane fly was carrying at least seven mites.  I read that most of these mites are phoretic, that is, they hitch a ride on the winged insect to get to an area where their preferred meal is located and do no harm to their flying limousine service.  There are a few mite species that actually do feed on the host. 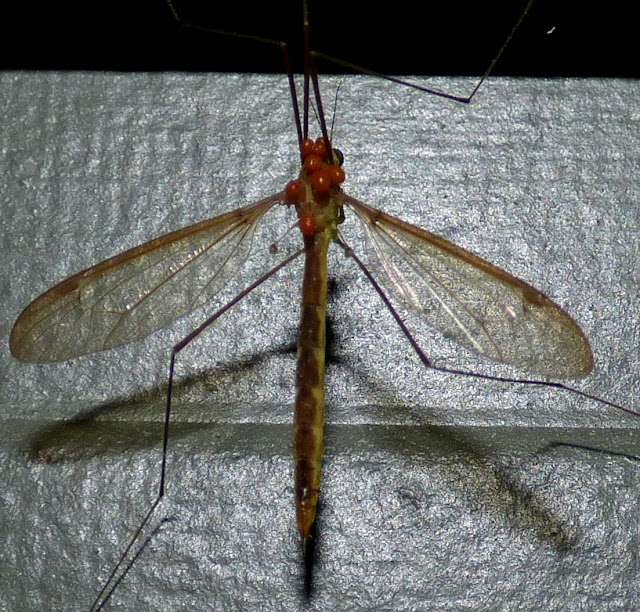 One evening I found a Scutigera scuttling about on the foundation outside.  More commonly known as the European House Centipede, this species was formerly native to areas around the Mediterranean Sea.  I have seen several of these fascinating creatures in the past couple years at the new public health laboratory where I work.  A hatchling Scutigera reaches adulthood after several molts.  By that time these centipedes have 15 pairs of legs, the rear pair resembling their antennae so that it is difficult to tell which is the front and which is the back of this arthropod. The pairs of legs are shorter at the front of the body and get progressively longer toward the back.  This enables the centipede to run swiftly without "tripping over its own 30 feet"!  I read recently on Wikipedia that these centipedes can live for three to seven years. They are ferocious insect and spider predators. I once saw a video of a Scutigera catching and eating two Brown Recluse Spiders! 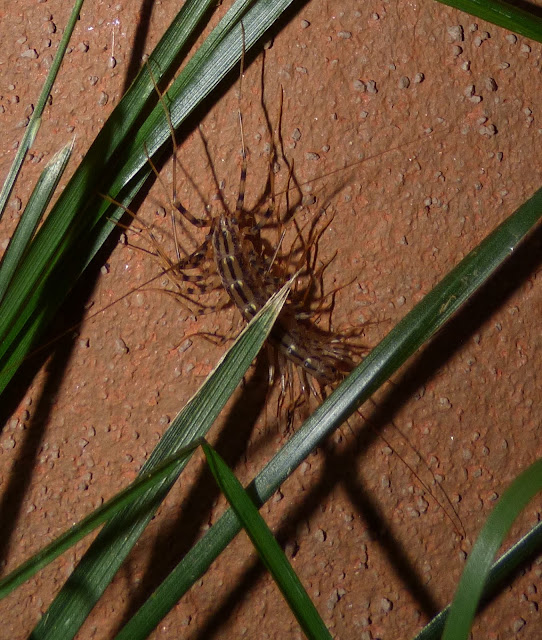 Posted by From Bluebirds to Turtles at 2:08 PM