One Method for Setting Up a Solid Bluebird Nesting Box

The Bluebird nesting boxes that I have been monitoring on two different trails over the past three years were beginning to show some age, so a couple weekends ago I decided to replace four old boxes with new ones, and take the old boxes home to repair and repaint for return to the field the next weekend.

I had excellent help from four youthful assistants and their parents. The happy youngsters all pitched in.  They carried the new nesting boxes, helped tighten screws and bolts, placed plastic nesting cups inside the boxes, inserted the galvanized nail that secures the door, and reminded me to soap the ceiling of each new nesting box to deter paper wasps from building nests inside.  And there were plenty of questions about why we install special nesting boxes for the beautiful Eastern Bluebirds, about the plants that were growing nearby, about a Killdeer we saw, and many other natural wonders. I was heartened by their bubbling enthusiasm. 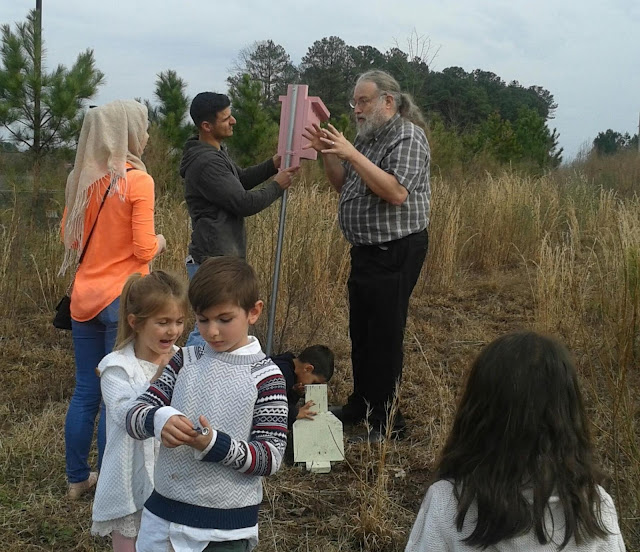 This past weekend I switched out three more Bluebird nesting boxes, replacing them with ones that the kids helped me take down the weekend before.  I had cleaned them up, filled most of the cracks and dings in the wood, and repainted them hoping to extend the life of each box.  I painted only the exterior of each box and used light colored paints which will help keep temperatures inside the box a bit lower in the heat of summer.  The interior of the boxes should not be painted.


Most folks who put up Bluebird nesting boxes and monitor the status of any nests that are built in them (noting the number of eggs, hatchlings and successful fledglings), have their own favorite style of nesting box and method for mounting the nesting box.  I'd like to share a pictorial of the approach that I've used the last few years on a couple of short Bluebird trails.

The Bluebird nesting box that I use is referred to as the "credit union" box.  They are built by the Eastern Bluebird Rescue Group for the North Carolina State Employees' Credit Union.  The boxes are made out of 1" pine and sell for just $10 each and are available at many NCSECU branches across the state of North Carolina.  According to the article that is linked (here) over 100,000 of these boxes have been built over the past 14 years.

An important feature of any Bluebird nesting box is a guard of some sort around the 1 1/2" diameter entrance hole which is optimal for Bluebirds.  The "credit union" box is equipped with a sheet metal guard that prevents squirrels from chewing out the entrance hole to a larger diameter which would allow larger birds like Starlings to use the box.  An expanded entrance hole will allow squirrels and other predators to gain access to the box. 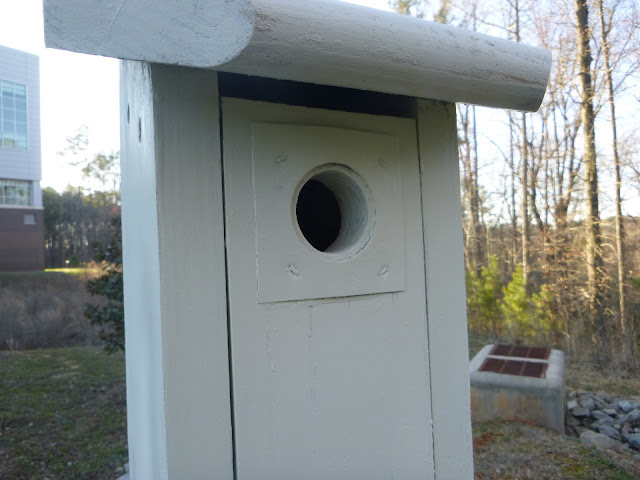 I have adopted using 1" EMT (aluminum electrical conduit) as a pole on which to mount the nesting box.Stores like Lowe's or Home Depot carry this product which comes in a 10 foot length.  Using a pipe cutting tool they have handy, I cut the conduit into a 7 1/2 foot piece with a 2 1/2 foot piece left over (the store staff can cut it for you,too).  This results in a length of conduit that is easy to transport home.  I use a sledge hammer (or other heavy hammer) to drive the shorter piece of conduit into the ground at the desired nesting box location, stopping every six inches or so, removing the conduit, and then continuing until I have a hole about 18" deep.  Once the shorter piece of conduit is removed, a sort of "socket" remains.  Placing the longer section of conduit into this socket leaves the pole about six feet tall.  This method provides a sturdy mount for the nesting box at a comfortable height for monitoring the status of any nests, eggs, and young birds. 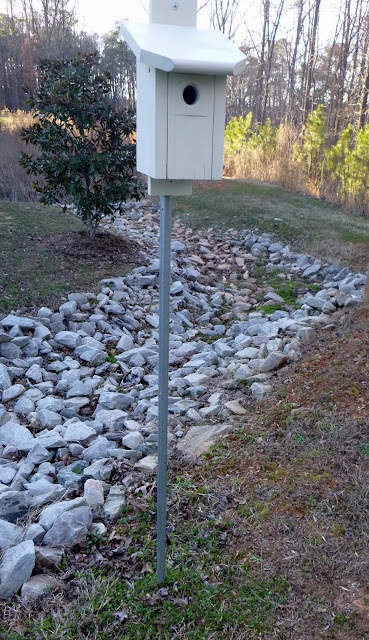 To mount the nesting box, I first use a 5/16" bit to drill a hole through both sides of the conduit about 1 inch down from the top, drilling through the top of the back panel of the nesting box as well.  At the bottom of the back panel, I pre-drill two 1/8" holes and attach a two holed U-shaped conduit strap using 1" Phillips-head screws. 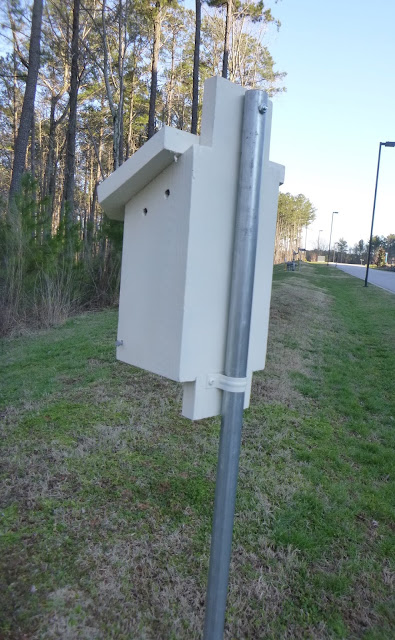 After sliding the U-shaped strap over the conduit and aligning the hole in the back panel with the holes in the top of the conduit, I insert a 2 1/2" long 1/4" machine screw or bolt.  I secure the box to the pole with a 1/4" nut and snug it down with a nut driver that I carry for that purpose. 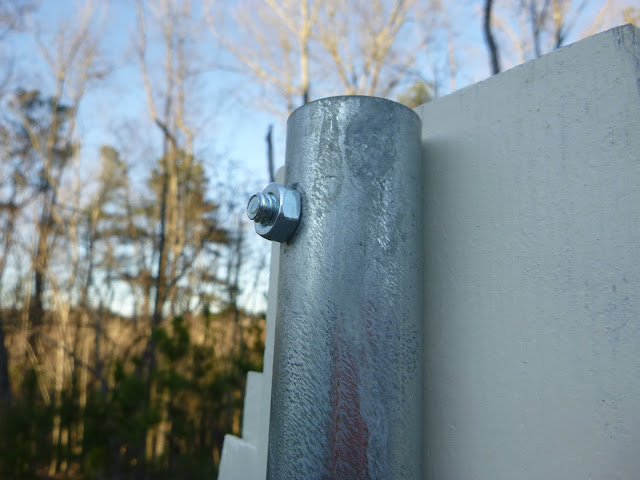 This is a close-up of the two-holed 1" EMT U-shaped strap with the conduit inserted. This method allows for easy removal of the nesting box for repair or replacement. By removing the 2 1/2" machine screw at the top of the pole, the box can then be slipped up and off of the conduit.  Rehanging the box is easy as well. 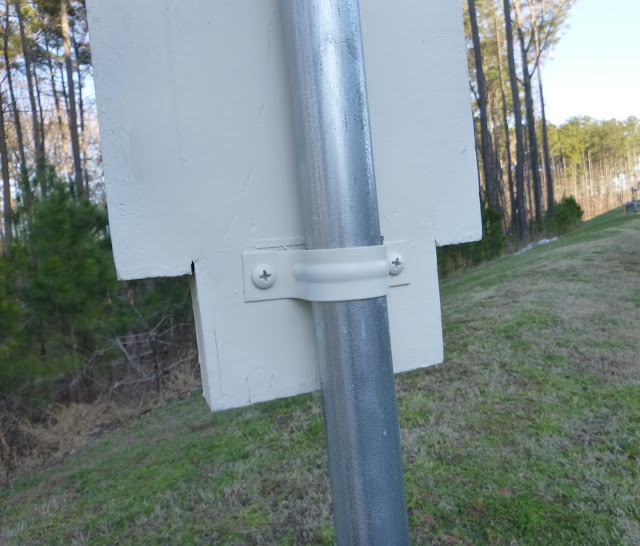 I have found that one good product to use as a removable nesting cup is a 4" (100mm) plastic plant or seedling container.  They can be washed in warm, soapy water for reuse after each nesting. 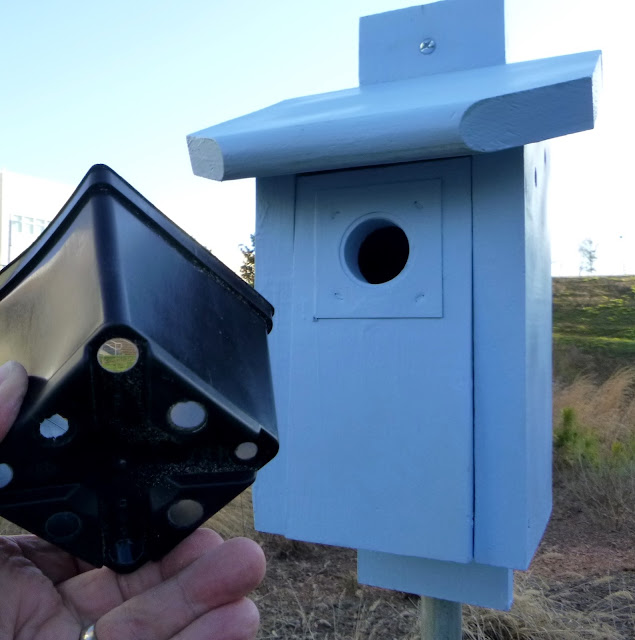 Lifting the front of the box allows easy access for inserting and removing of the plastic plant container.  Notice the grooves cut into the back side of the door.  These slots can provide nestlings that are ready to fledge a toe-hold to boost themselves to the entrance hole.  A long time Bluebird monitor told me recently that young birds that are ready to fly don't really need these grooves to exit the box.  But this is the theory behind why these slots are cut. 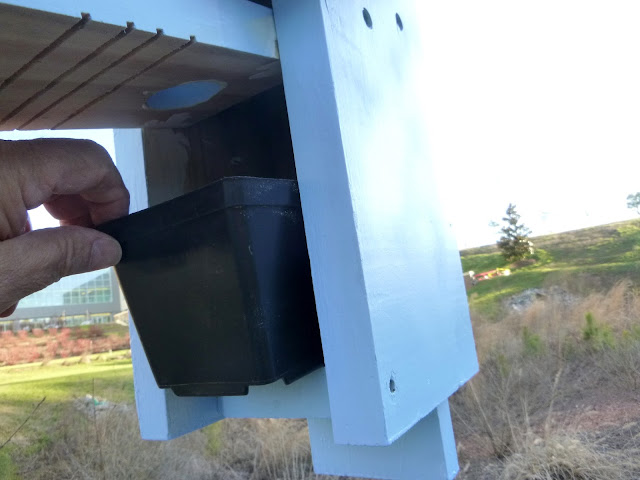 I like this option for a nesting cup because it fits so snugly in the box.  I find that this keeps the fecal sacs that the young birds produce after being fed from falling outside the rim of the nest cup where the adult birds cannot retrieve them. Can you imagine how much bird poo would accumulate in the box it the parent birds weren't hauling it away? 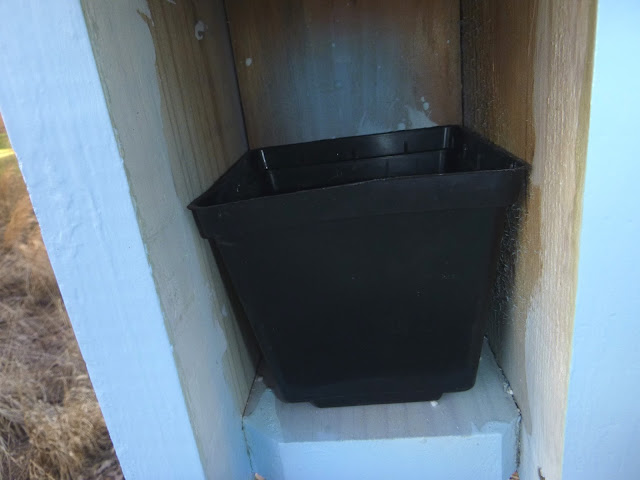 To secure the front panel of the nesting box, I use a 3/16" bit to drill out the hole shown here to the depth of about 3 inches.  A galvanized 16 penny nail is inserted to keep the front panel closed.  This 3 1/2" long nail means that about a half inch is left exposed so that it can be easily removed when opening the box for monitoring the nest. 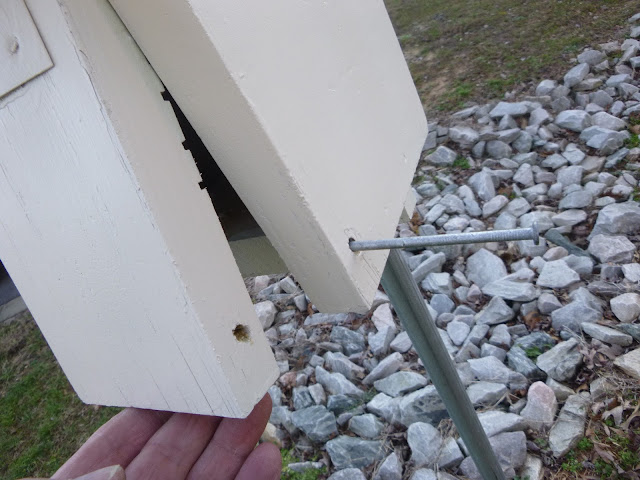 Sorry for the blurry photo!  I learned last year that you can use a bar of Ivory soap to coat the underside of the roof (ceiling) to deter paper wasps from building their nests inside Bluebird nesting boxes.  The presence of wasps in a nesting box makes it difficult for Bluebirds to nest and raise their young. 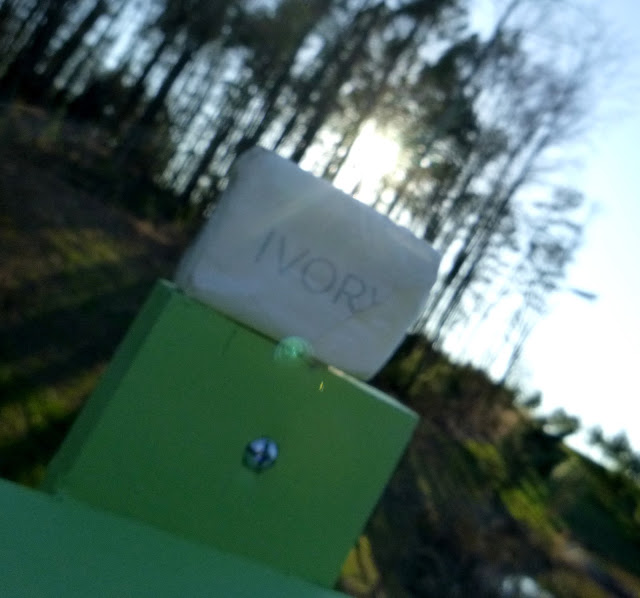 This light green nesting box was used by a pair of little Brown-headed Nuthatches last summer.  They laid six eggs and fledged five young birds.  Later in the summer a pair of Eastern Bluebirds built a nest in this same box.  I found that nest had failed some time after the eggs were laid but before they hatched.  The nest was very wet. It appears that a storm blew rain through the entrance hole and soaked the contents.  I generally face my boxes to the East, Southeast or South so that the front of the box get some early morning sun, especially in the early spring.  In our location many of our storms come in from the West, so I usually avoid facing boxes in that direction.

The summer before, this box was home to a large paper wasp nest.  This was before I learned about Ivory soap!  In addition a mud dauber built its chambered nest on the side of the nesting cup.  Nature is always looking for a way and a place to reproduce! 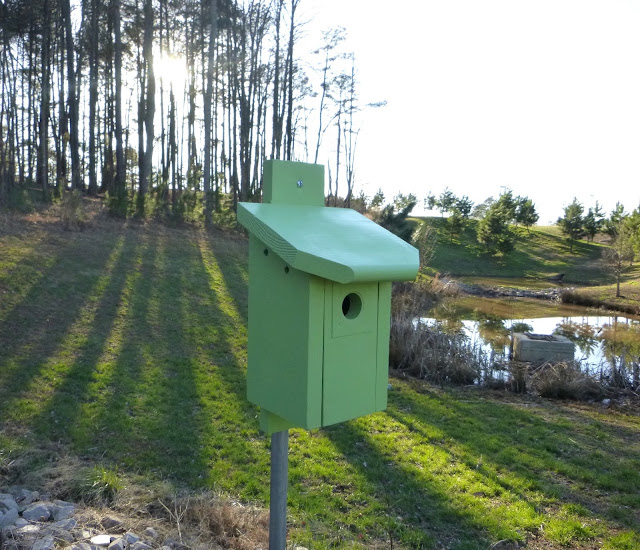 This light blue Bluebird nesting box has been home to five Bluebird nests over the past two seasons.  One of those nests failed last spring, the eggs not hatching several days after the expected hatch date and the mother bird abandoning it.  After removing the old nest and eggs and placing a new nesting cup in the box, the pair built a new nest and raised a successful brood. 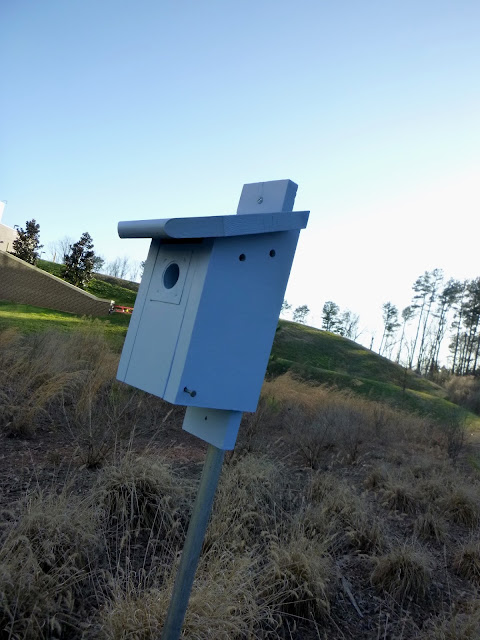 Ventilation is very important for nesting  boxes.Notice the two holes on the side of the box near the roof-line and the open slot just above the entrance hole.  These openings help evacuate the heat that can build up inside the box on hot summer days. This trail of seven Bluebird nesting boxes is located in West Raleigh, NC.  I have eight more boxes erected around our home about four miles away.  Last year these 15 nesting boxes provided safe cavities for 18 nests to be built.  Those nests held a total of 90 eggs that were laid by several species of birds including Eastern Bluebirds, Carolina Chickadees, Brown-headed Nuthatches, Tufted Titmice, and Carolina Wrens.  Of those 90 eggs, 70 hatched and 69 of the hatchlings developed into young birds.  These little birds took flight after being successfully fed and nurtured by their parents. 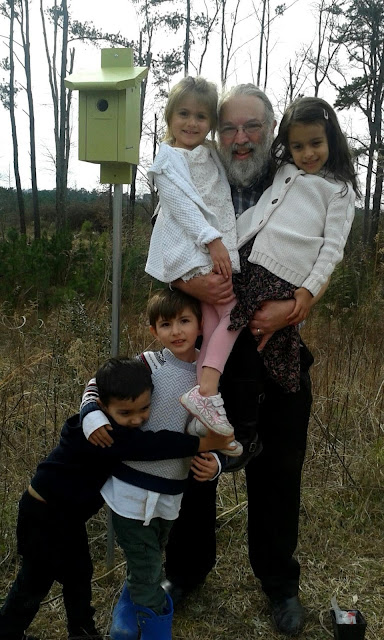 Posted by From Bluebirds to Turtles at 9:14 PM