MID-JULY "MOTH HUNTING" WITH THE GRANDSONS (AND OTHER CREATURES)

With the grandsons visiting from Georgia, we decided to set up an inaugural event for our "moth pit", not to be confused with a mosh pit (no wild dancing allowed - see: (mosh pit)). Earlier I had ordered a mercury vapor lamp which I modified for the moth viewing area.  I suspended an inexpensive large white bed-sheet from a piece of 1/2" conduit and draped the sheet over a folding table.  I placed the mercury vapor lamp on a plastic crate which I set on the folding table. At the other end of the moth pit, I hung another bed-sheet and suspended a black light in front of it.

One of our first customers was this Brown Marmorated Stink Bug (BMSB).  I've read that this species was accidentally brought here from China and can cause damage to fruit trees and crops such as corn, soybeans, and tomatoes. 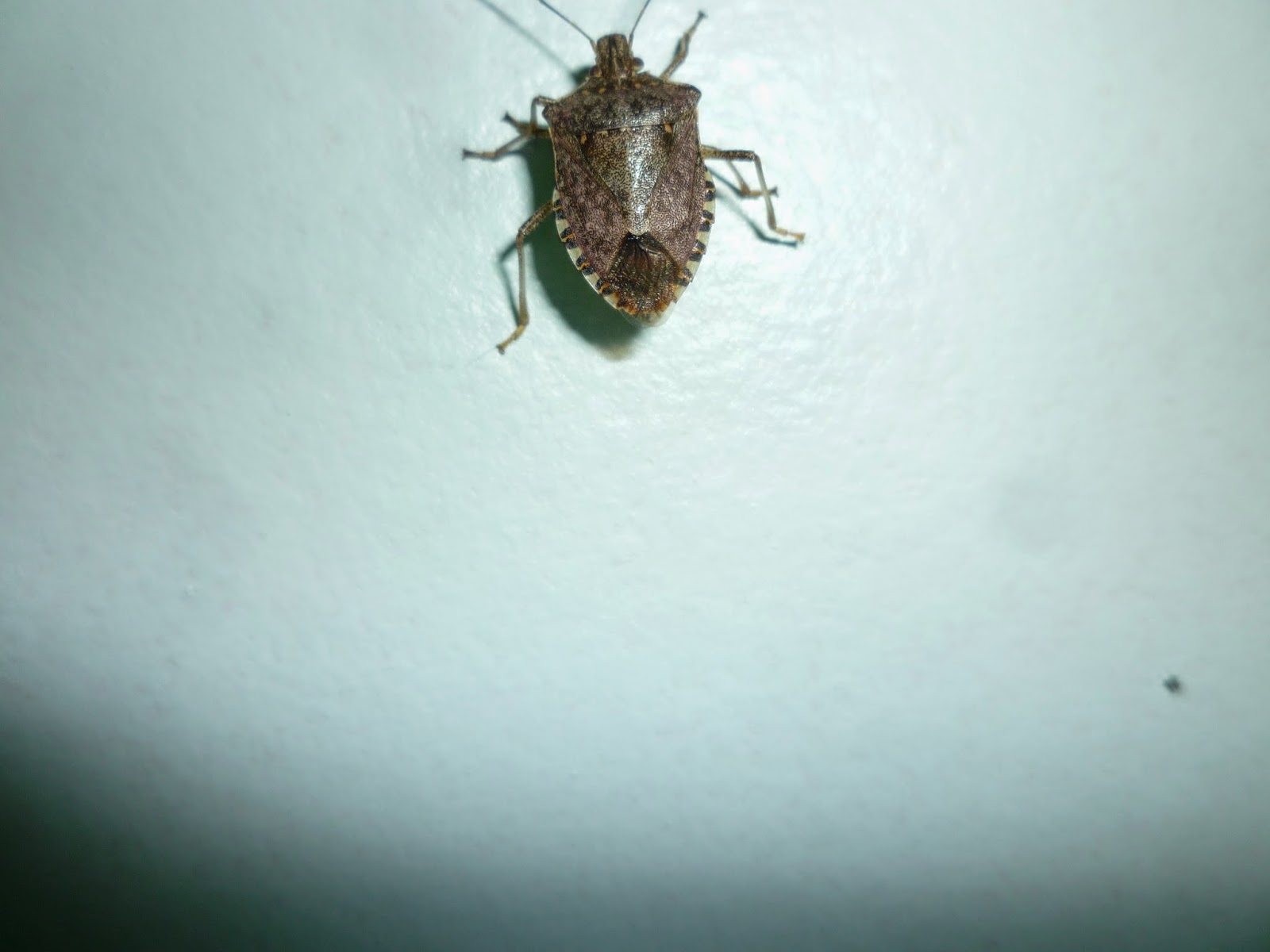 Our first moth visitor was this black and white beauty, a Grape Leaffolder Moth.  Their caterpillars feed on grape leaves and make their cocoon by folding part of a grape leaf and "stitching" it together on the open sides to form an insulated pocket in which to transform into its adult moth form. 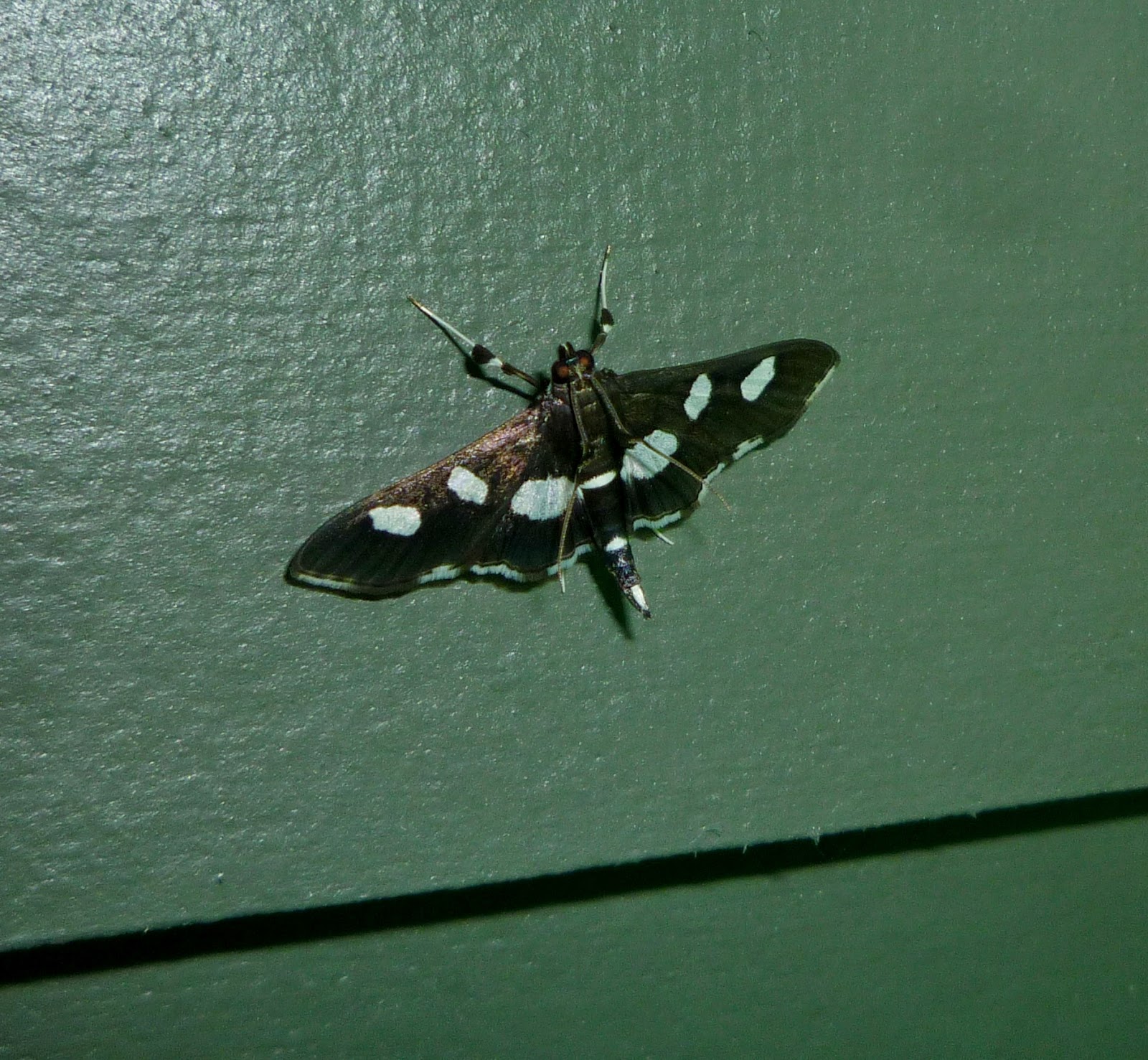 Soon we had another moth visitor.  This lovely moth is a female Pink-striped Oakworm Moth.  My wife had seen a pair of these moths a couple weeks earlier.  Their fuzzy head is quite luxurious. 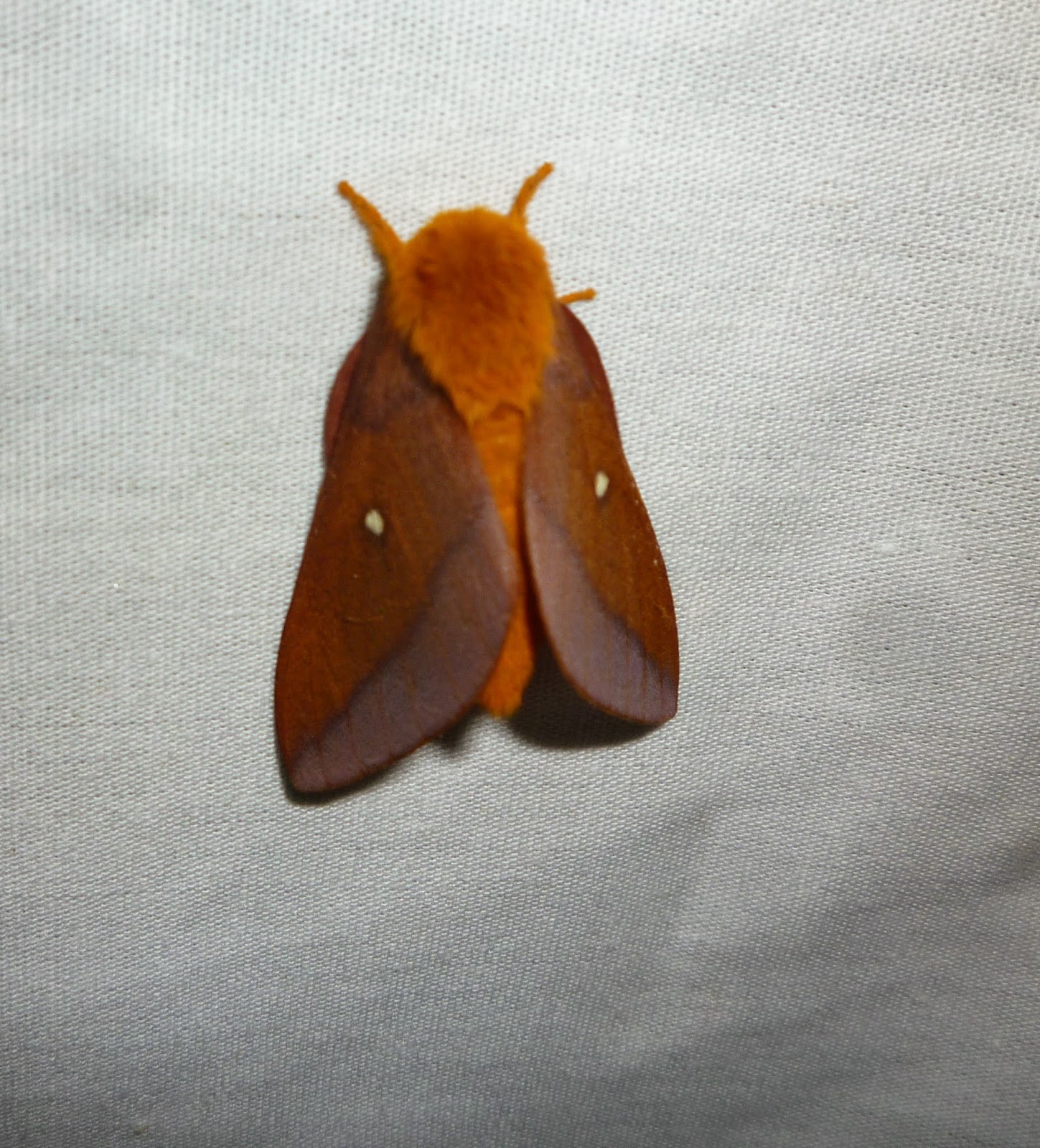 Next up was this Skiff Moth.  It is a chunky little moth with chocolate brown side "panels".  The "What's That Bug" website describes the caterpillar of this moth as a harmless species of the "slug caterpillar" family some of which have spines that can deliver a painful sting.

(link to What's That Bug - caterpillar) 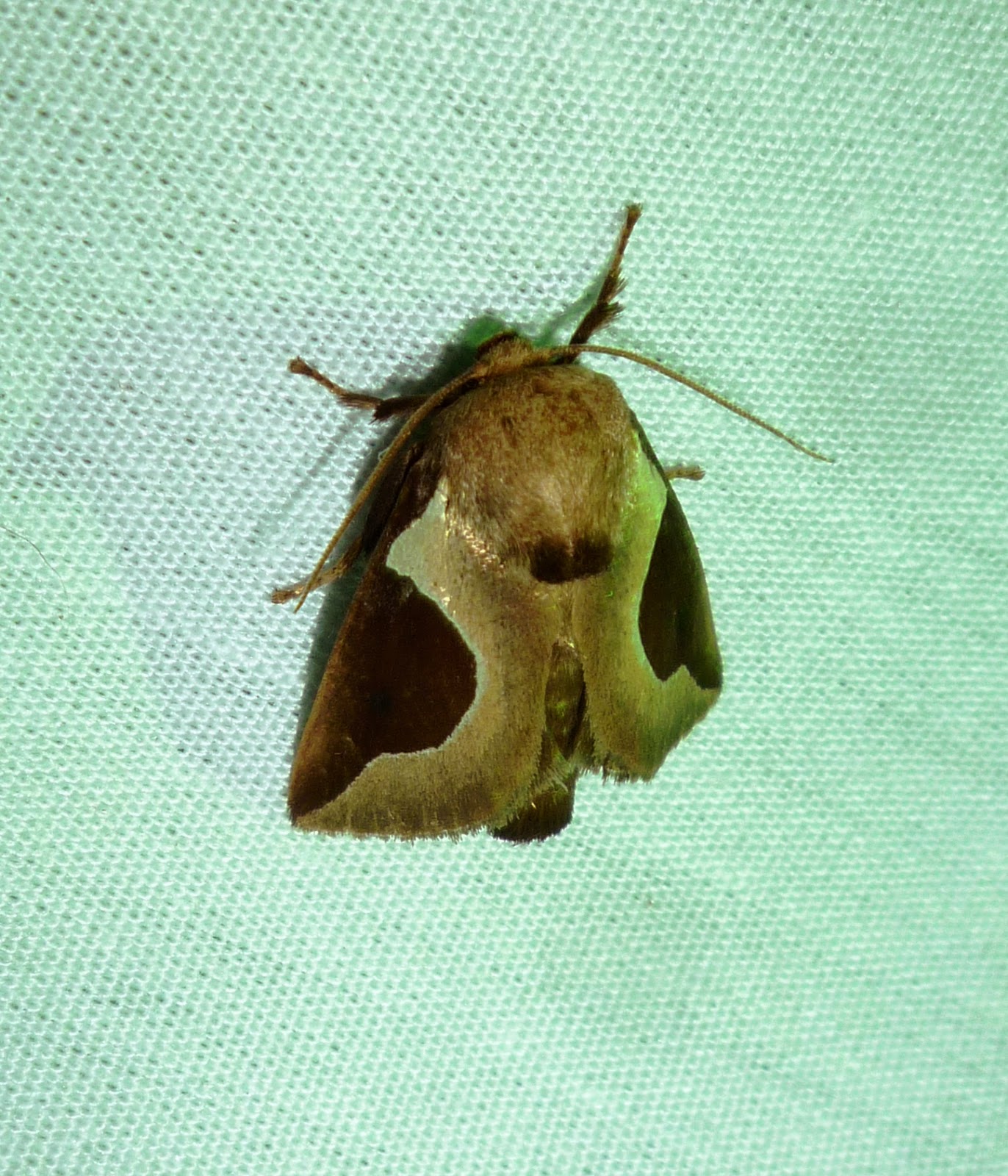 Soon this robust beetle with pincers flew in and landed on one of the sheets. 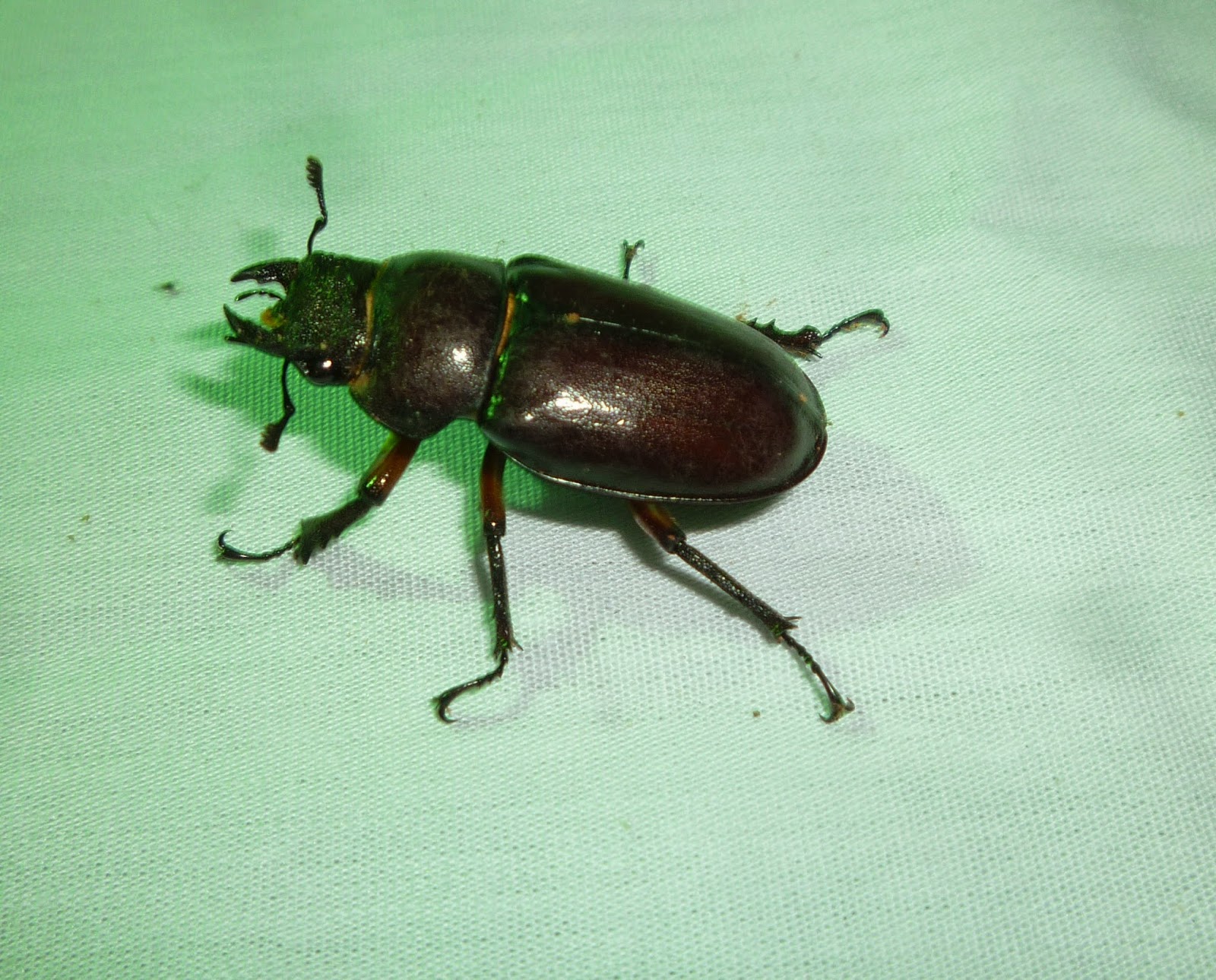 One of the twins let the female Reddish-brown Stag Beetle take a ride on his finger.  These so-called "pinch bugs" are pretty harmless, but a bit scary looking.  One of the characteristics of this stag beetle is the yellow-orange color of the femur (thigh bone).  The larvae of this beetle, large "C-shaped" grubs, feed on rotting trees and logs.  The adult beetles feed on sap.  I read that captive adults can be fed maple syrup or sugar water. 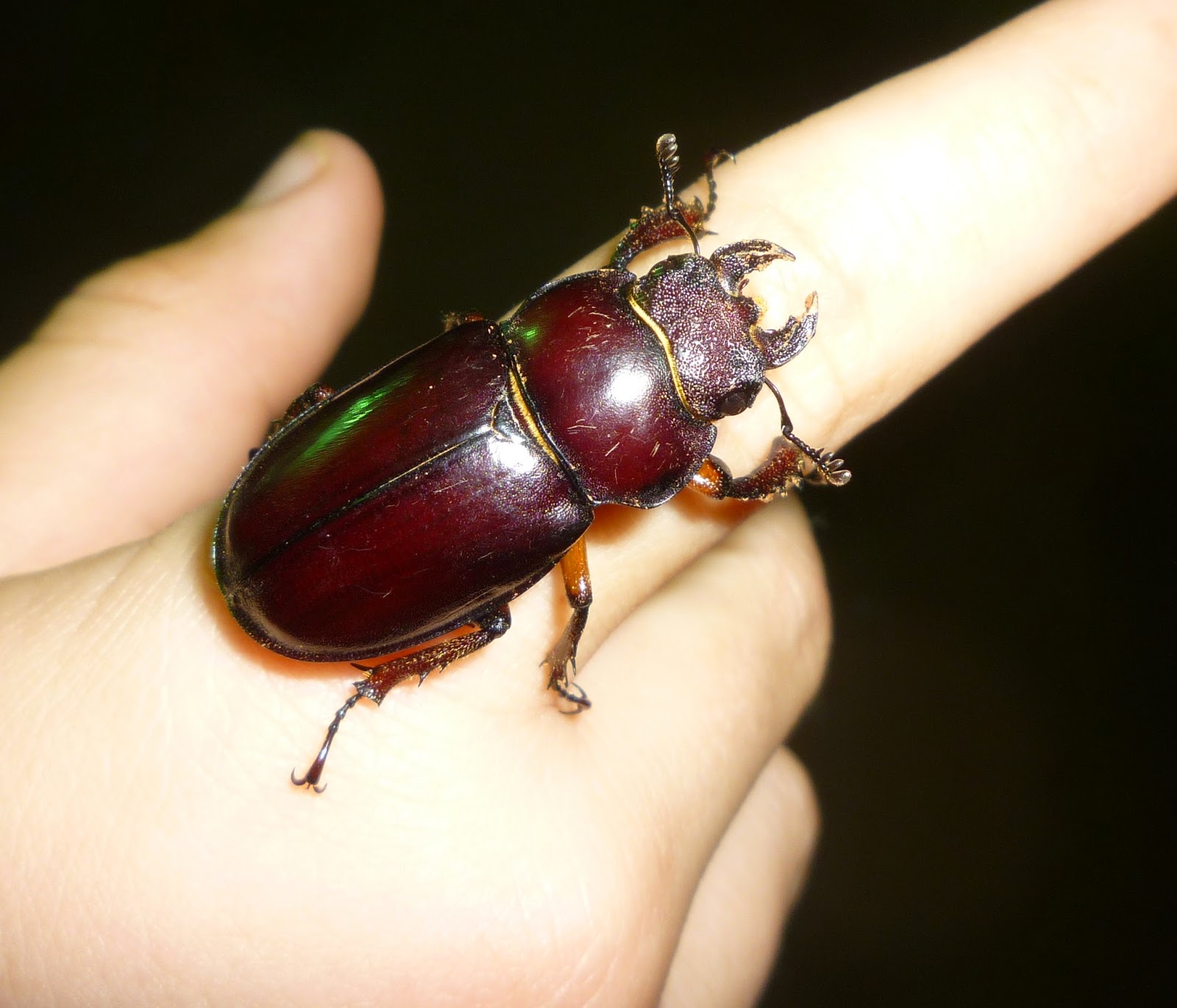 About a month later this male showed up one evening.  The males use their sickle shaped "pincers" to wrestle with other males for the chance to mate with a female. 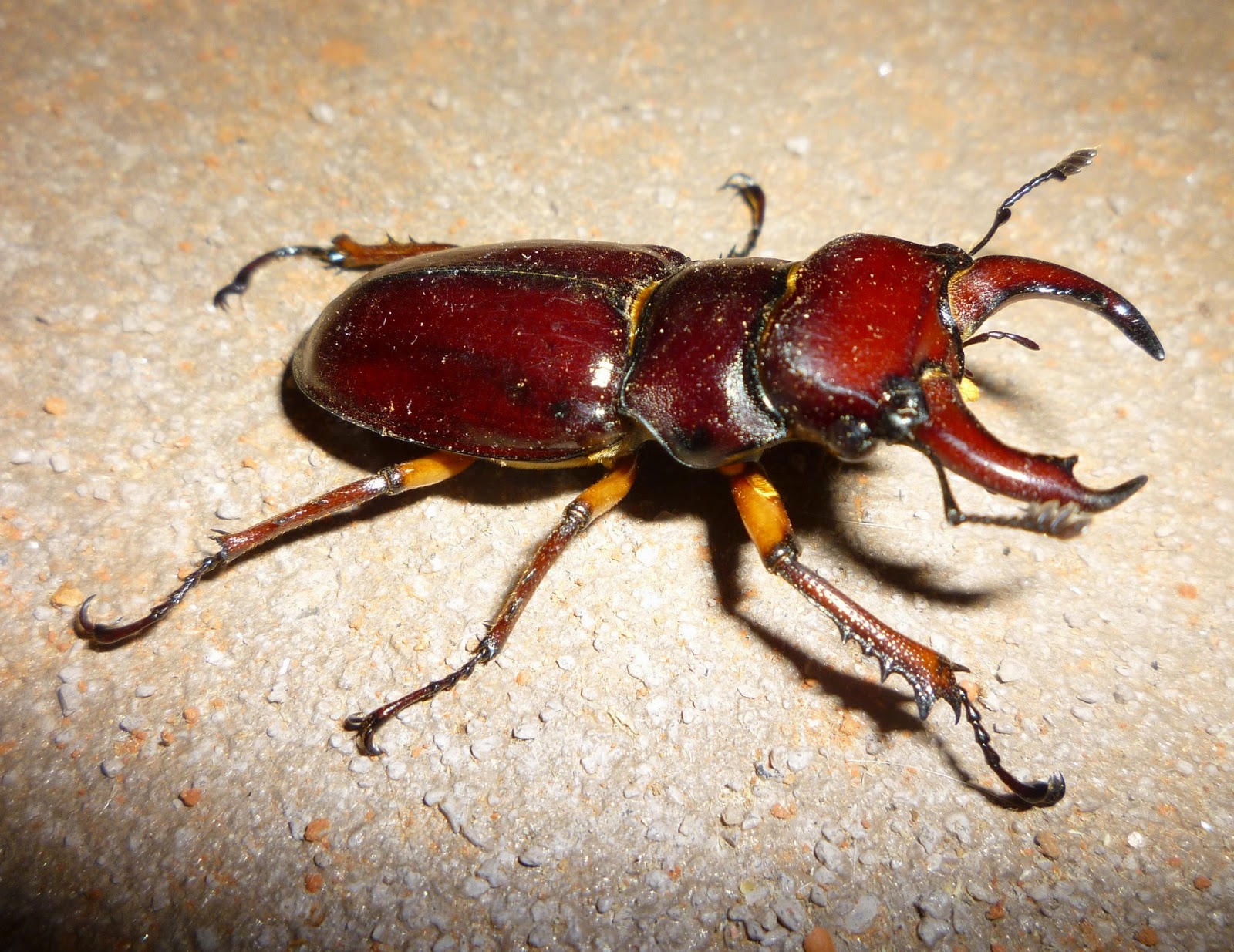 Below is a close-up of the female Stag Beetle's antennae.  I read that the stag beetle's antennae usually have ten segments.  Many species have the segments at the end of their antennae enlarged, and some species, like this one, have elbow shaped antennae. 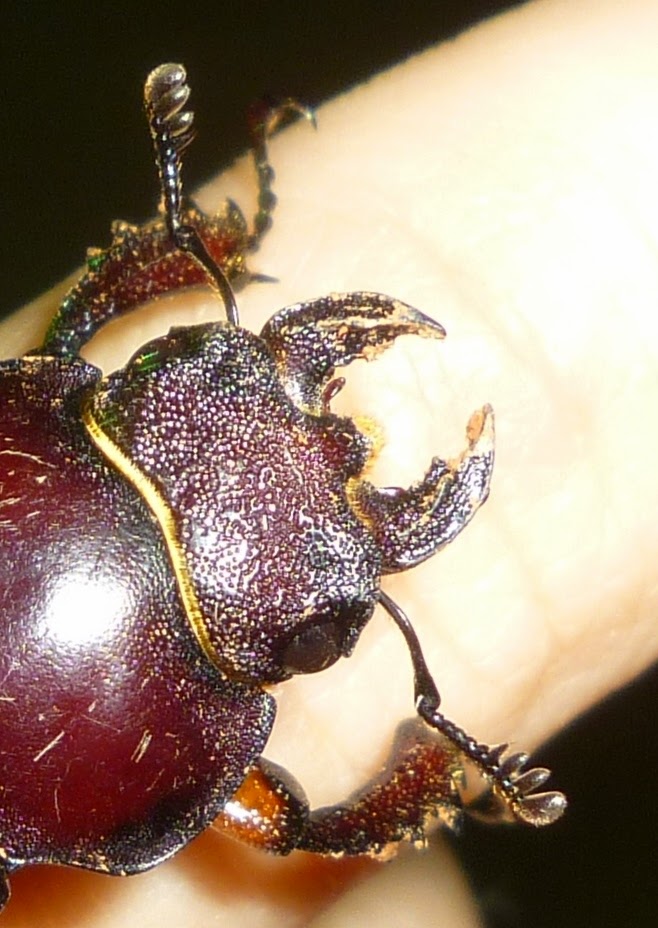 This is a close-up of the male stag beetle's antennae and mandibles.  See if you can count the ten segments.  The one closest to the head is a long segment. 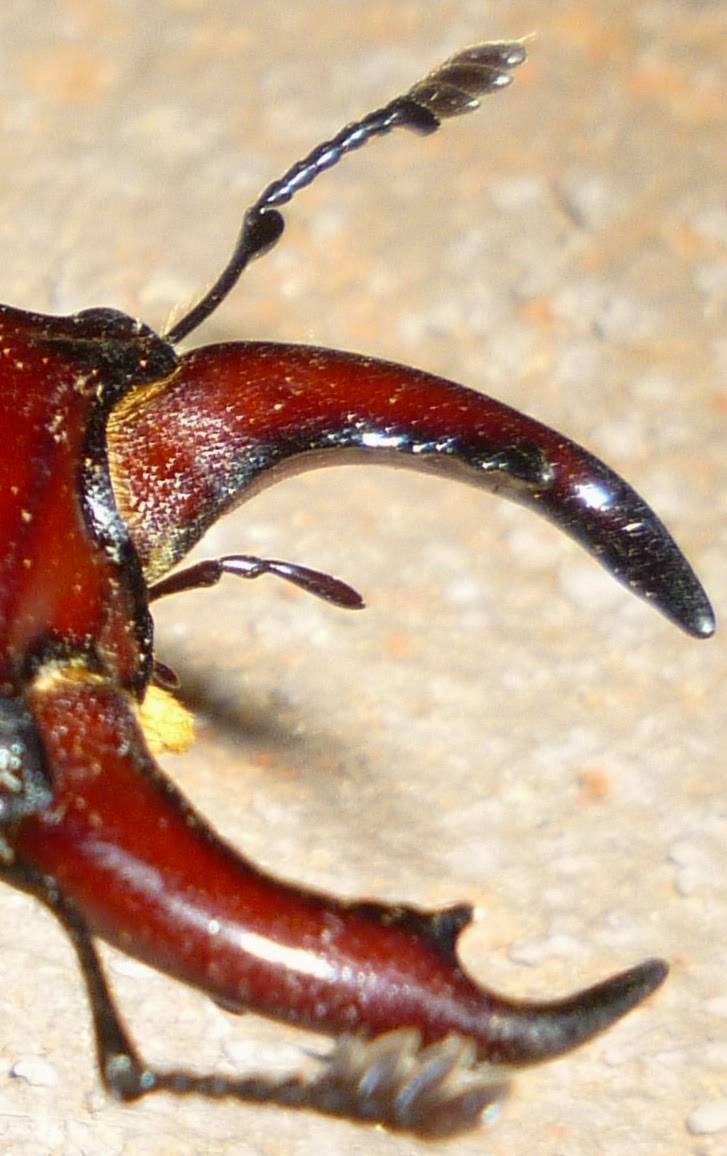 We found a few other moths that evening, but I have not been able to identify them to this point.  But the biggest hit of the evening was a Brown Garden Snail that the boys positioned to see if it could crawl up the vertical portion of a concrete step.  They were impressed that indeed it could!  I did not get a photo of it that night as I was busy tracking down moths and beetles, but I did get these pictures last fall of a Brown Garden Snail on the leaf of an October Glory Red Maple. 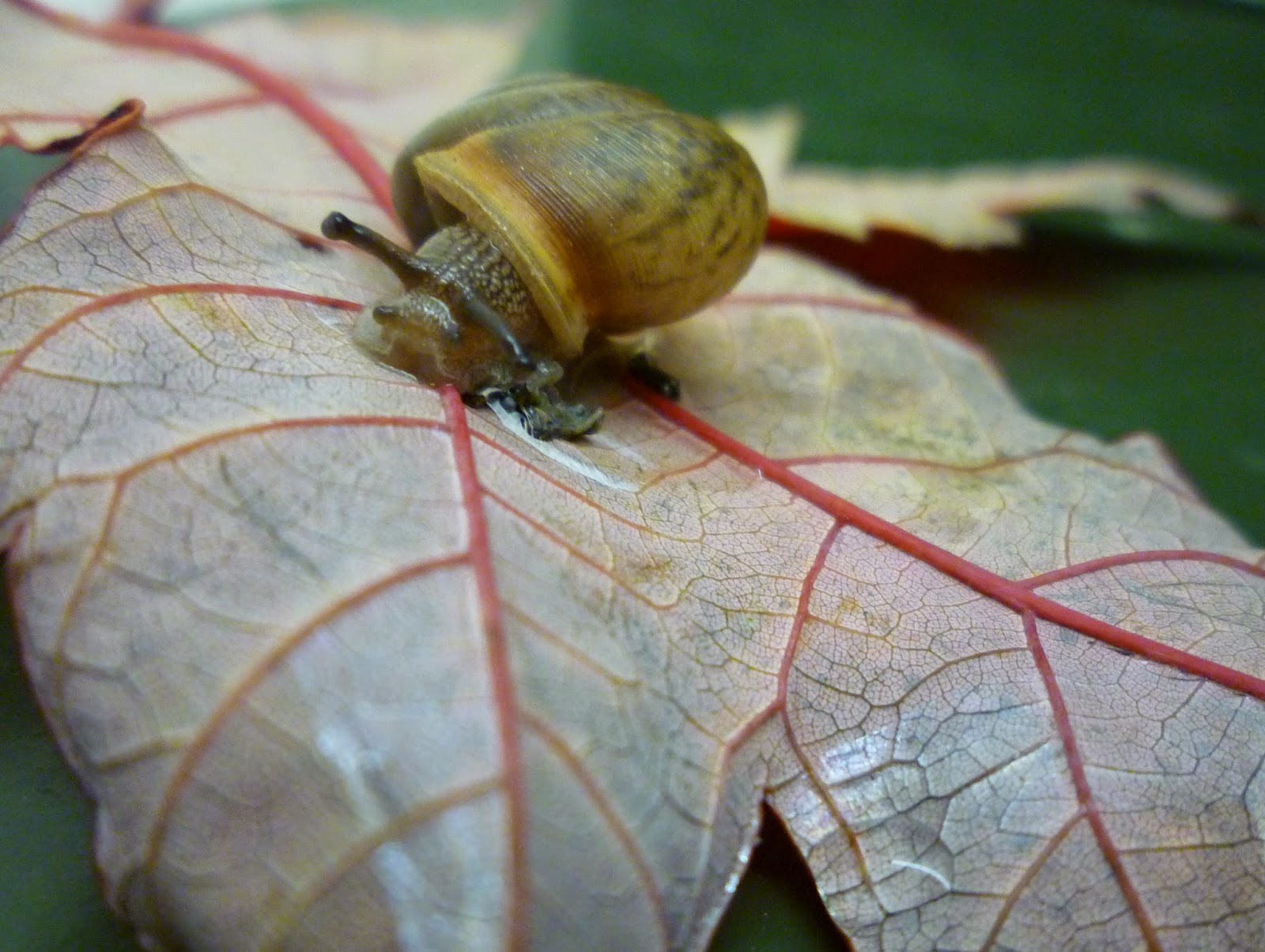 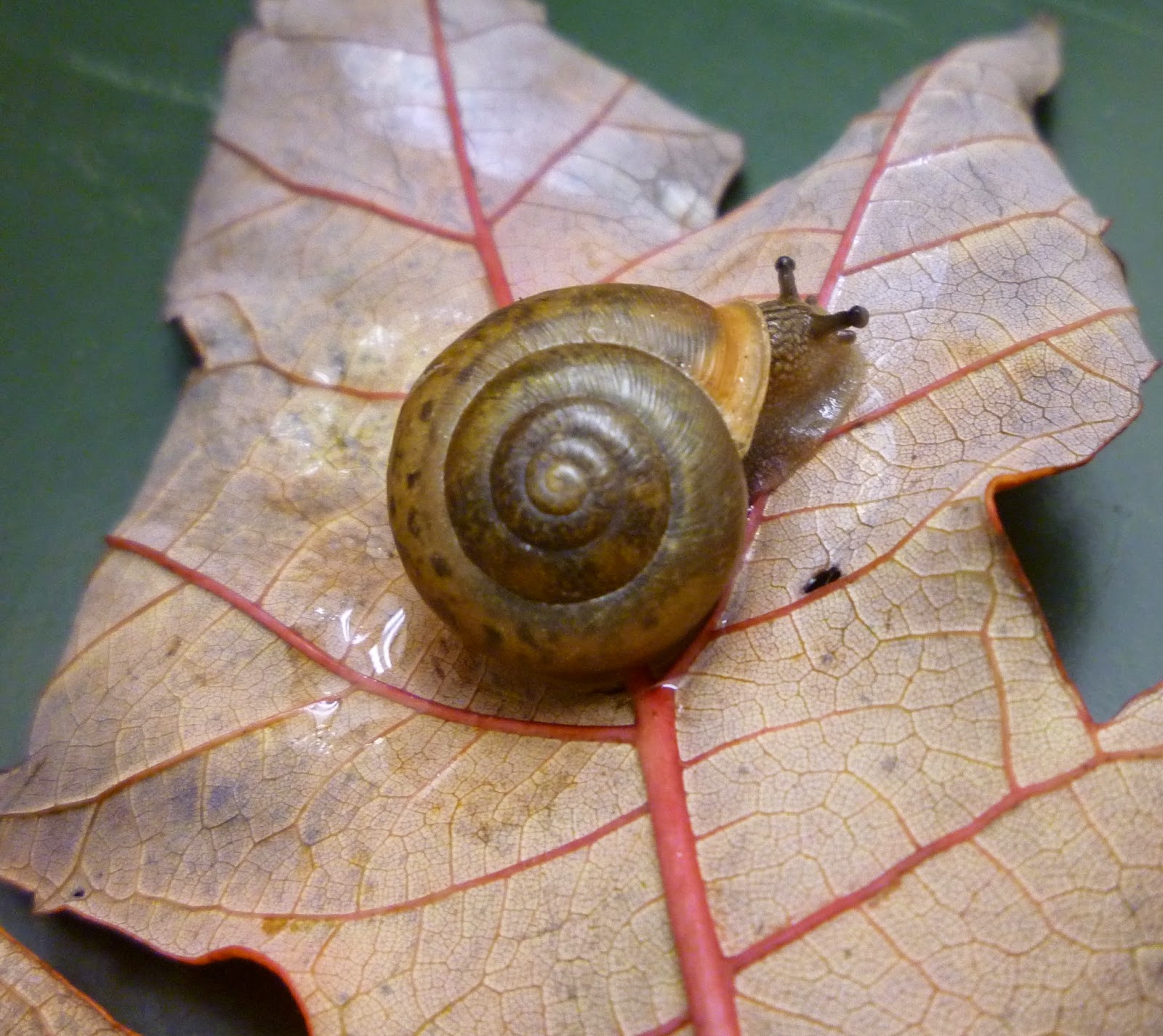 The boys also spent quite a while following three large Leopard Slugs that glided around near the edge of the Moth Pit.  I did not get photos of them either, but here are a couple links to pictures and interesting facts about these handsome mollusks.

(another link to Spotted Leopard Slug)

Sadly, the grandsons were gone too soon, back to their Georgia home.  So we've continued our hunts for more of nature's creatures from our respective environs.

Back at the lab I found this remarkable Clymene Moth wearing a dagger-shaped (or cross-shaped) marking on its back.  Its hind wings, which are covered here, are bright yellow. My sister found one of these moths just two weeks earlier at her home in Washington, PA.  This moth is in the Tiger Moth family and its caterpillar is quite spiky like its cousins the woolly-bears.  Here is a link about how to keep a woolly-bear to observe for a while. (link) 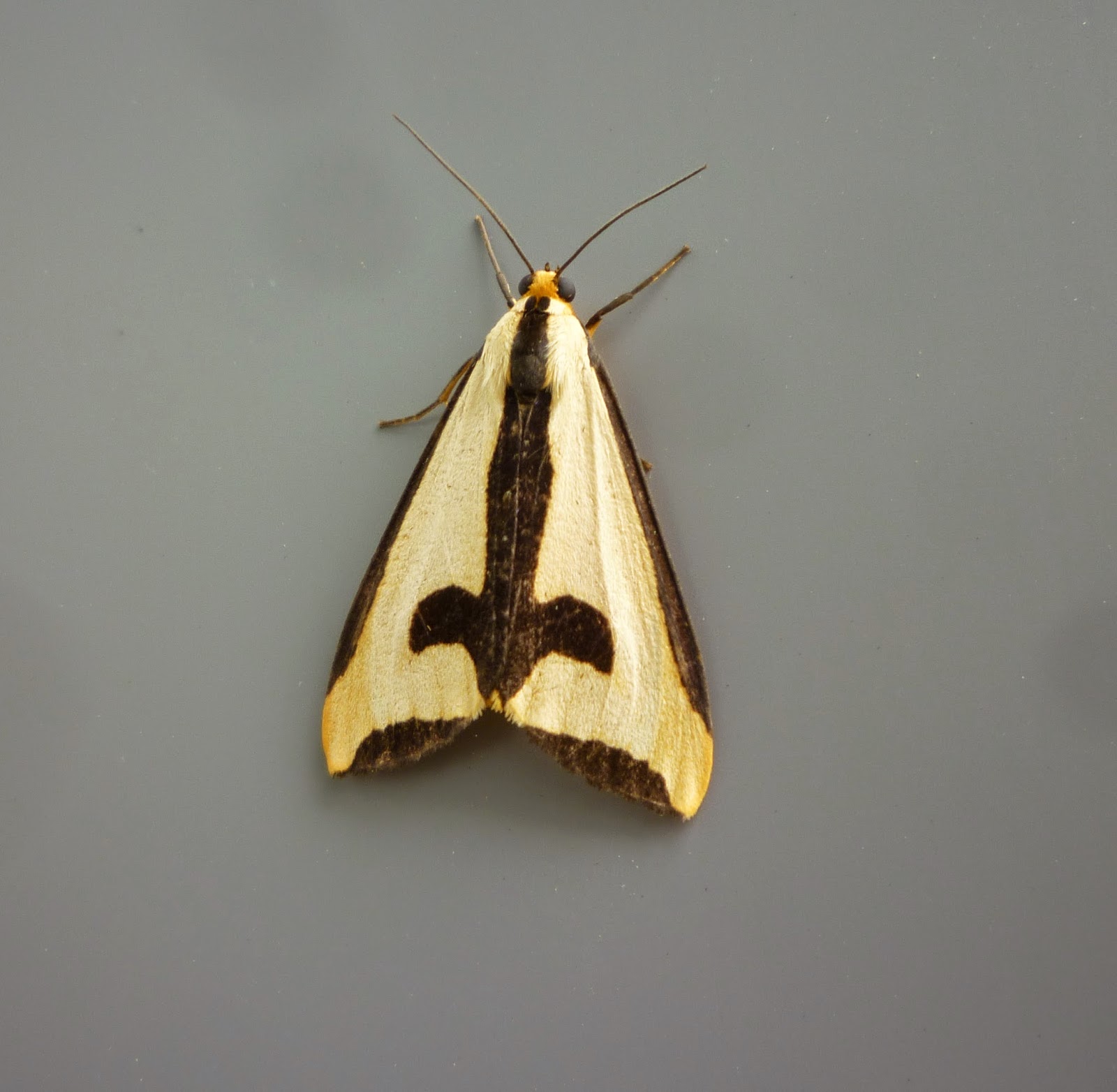 At home by the light at the side entry door, we found this beautifully iridescent moth with pale gold along the front edges of its wings.  Its antennae gracefully trailed back over its pearly wings.  I emailed a copy of this picture to "What's That Bug". They identified this winged beauty as a moth with the sscientific name, Stemorrhages costata  (link).  Later I found references to an almost identical moth know as Kimball's Palpita Moth (Palpita kimballi)  (link)  that is more common in our area.  I need someone to show me the difference! 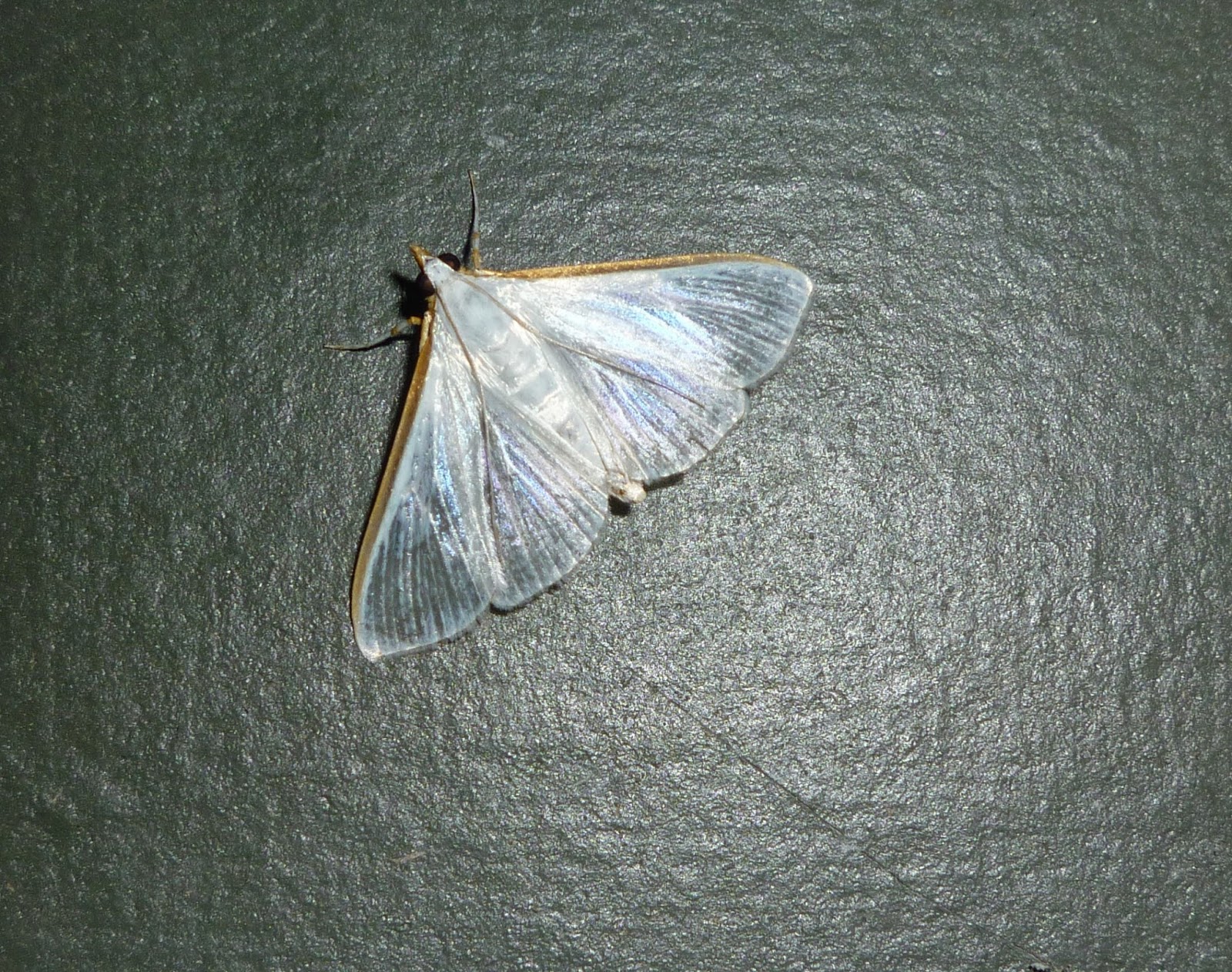 Nearby we found this gorgeous Tulip-tree Beauty Moth.  It stayed in the same spot for two days before flying away. The caterpillar stage of this moth is one of our largest measuring worm or geometer ("earth measurer"). On a Sunday morning late in July as I passed the pottery jug birdhouse of Carolina Wrens on the way to potty the dog, I noticed that the wrens seemed to be hanging out of the nest, sort of on "their front porch".  They'd be flying within an hour or two as we soon found out. 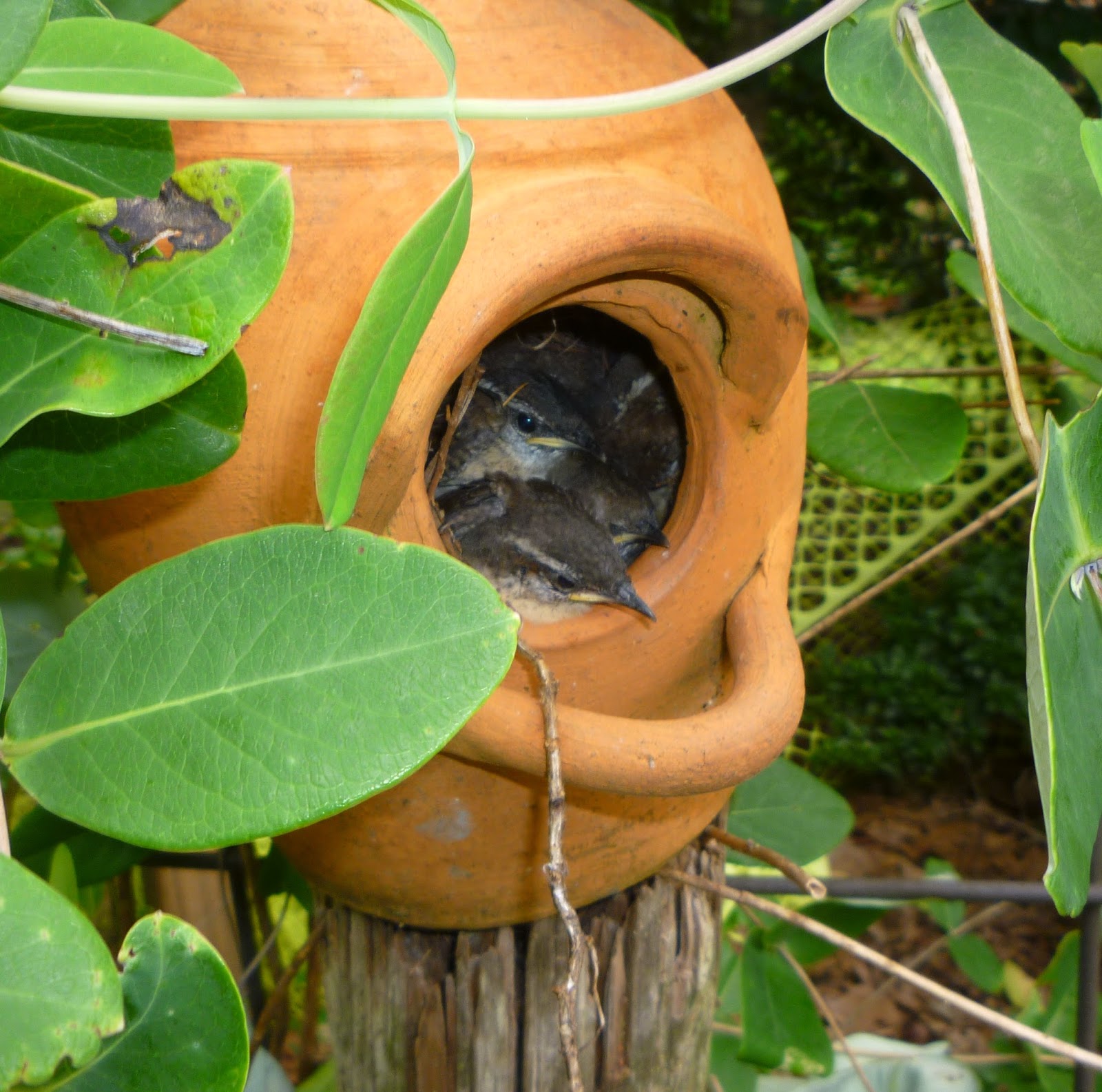 My wife called me to the living-room to see four little birds fluttering around on "our front porch".  We went out to investigate and as we tried to locate each of the four babies, I felt something alight on my left should.  My resourceful wife grabbed her i-phone and took this picture.  The little bird sat there for nearly a minute before fluttering off after his nest mates!  We're not sure if it was reminded of the nest it had just departed when it looked at my scruffy face. 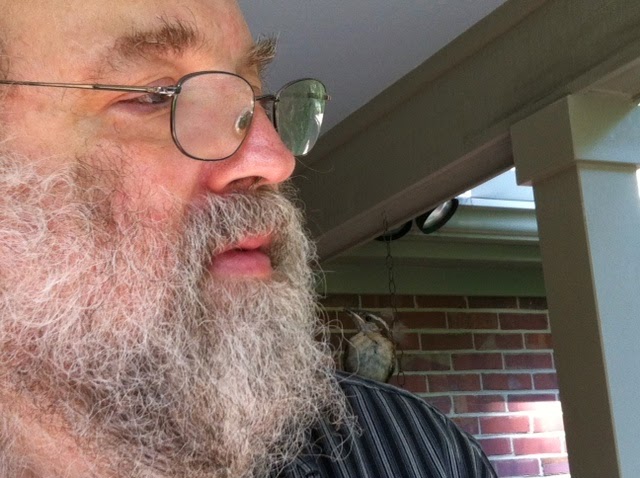 Taking a leisurely walk behind the lab I found this Carolina Mantis on a Winterberry Holly bush.  It had some sort of winged insect in its grasp. 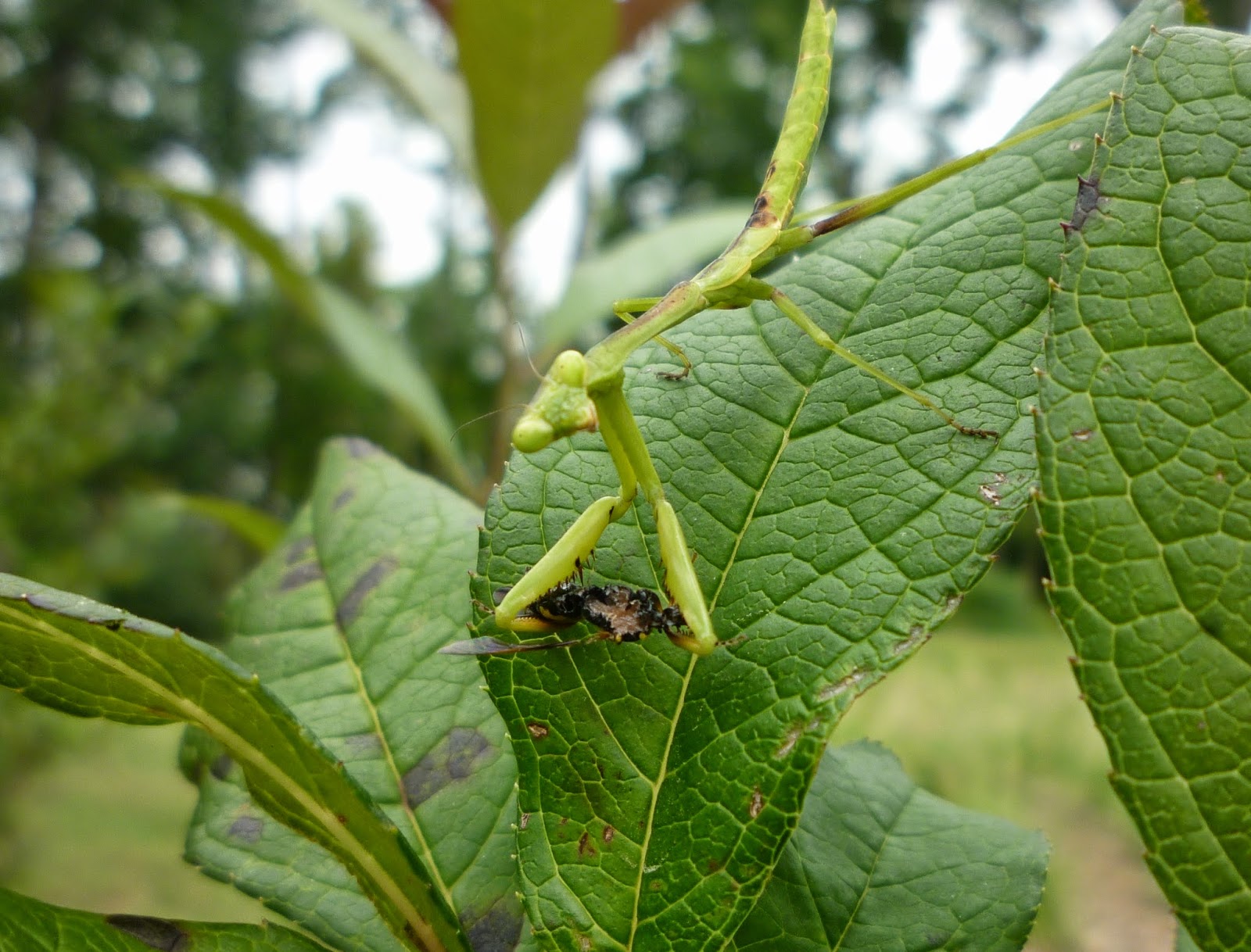 The mantis always seems to be looking my way no matter where I moved.  So I headed on to the next bush so that it could finish its meal in private. 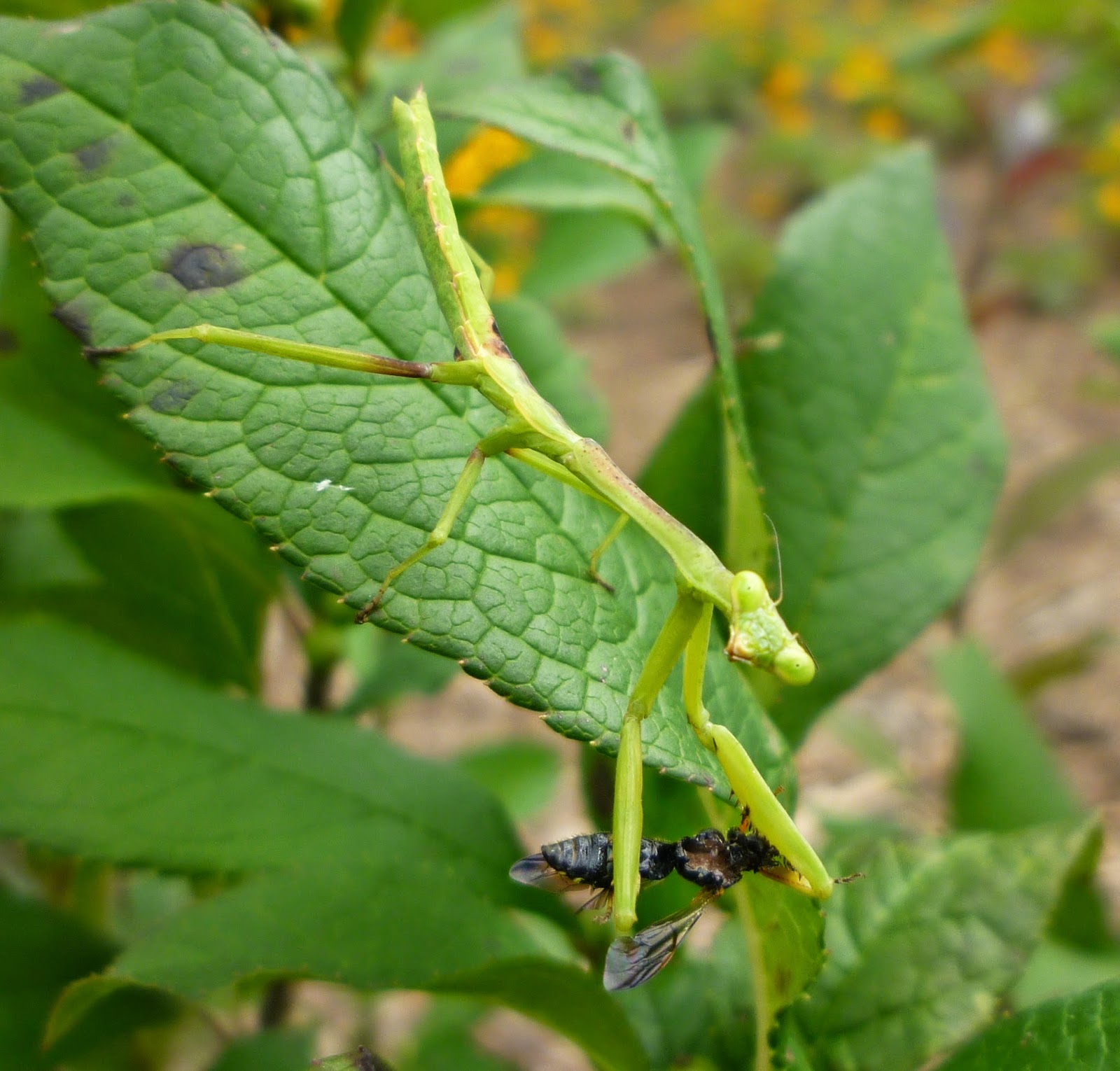 On another Winterberry Holly, I found this odd looking creature.  It took me a while to Google up the identity of this caterpillar.  When I first saw it on the leaf, I was reminded of a partially washed off bird splash.  I also couldn't figure out the material that was suspended seemingly in mid-air between its front end and its back end.  I learned that this is the caterpillar of the Harris's Three Spot Moth.  The suspended material is actually the remains of the head that it shed when it last molted and it is attached to wiry hair-like structures on its body.  These caterpillars use these "old heads" in one of its defense strategies. 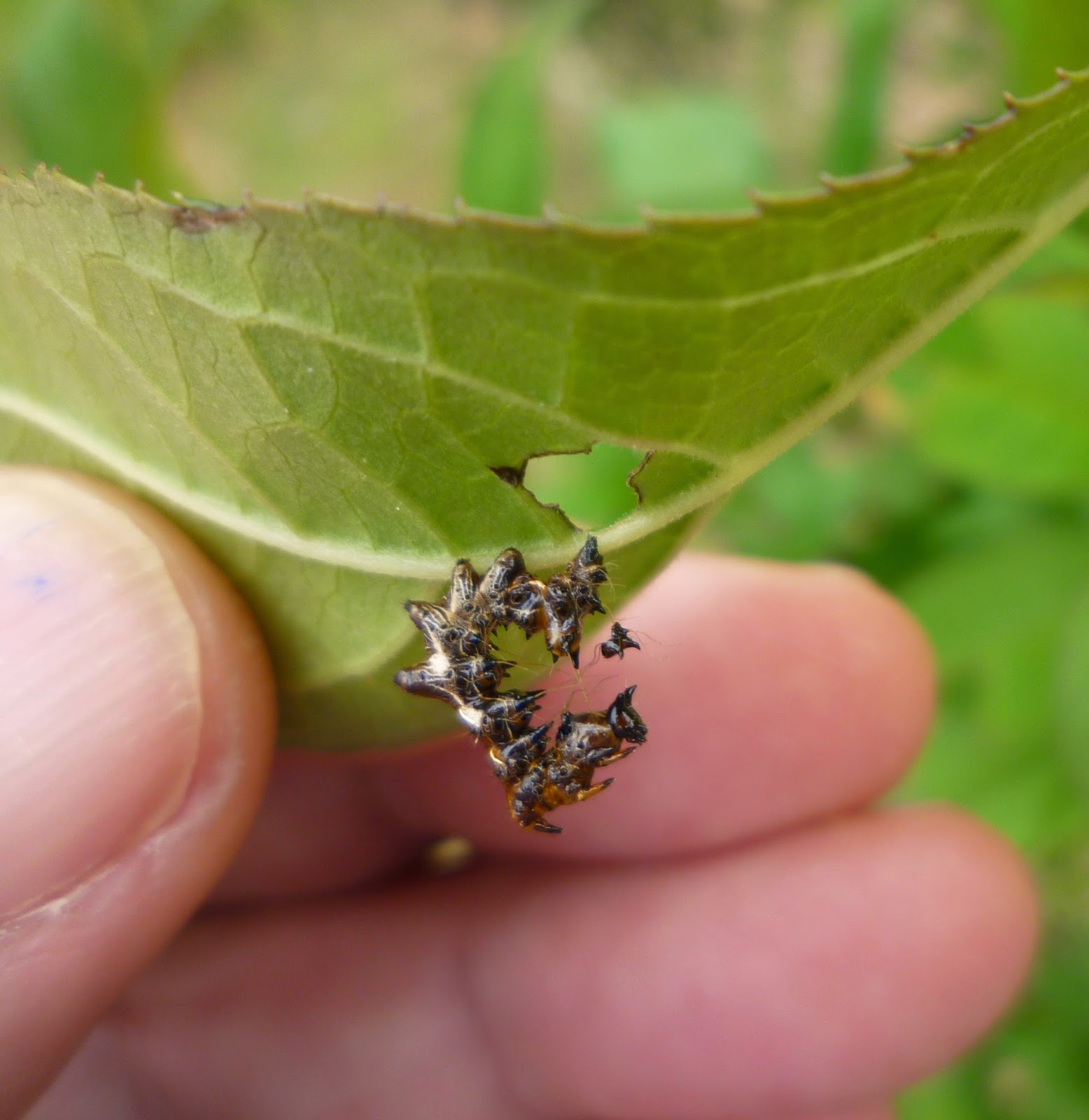 I found this interesting moth on the back window of the lab. The unique silvery markings on its wing helped me confirm its identity as a Soybean Looper Moth. 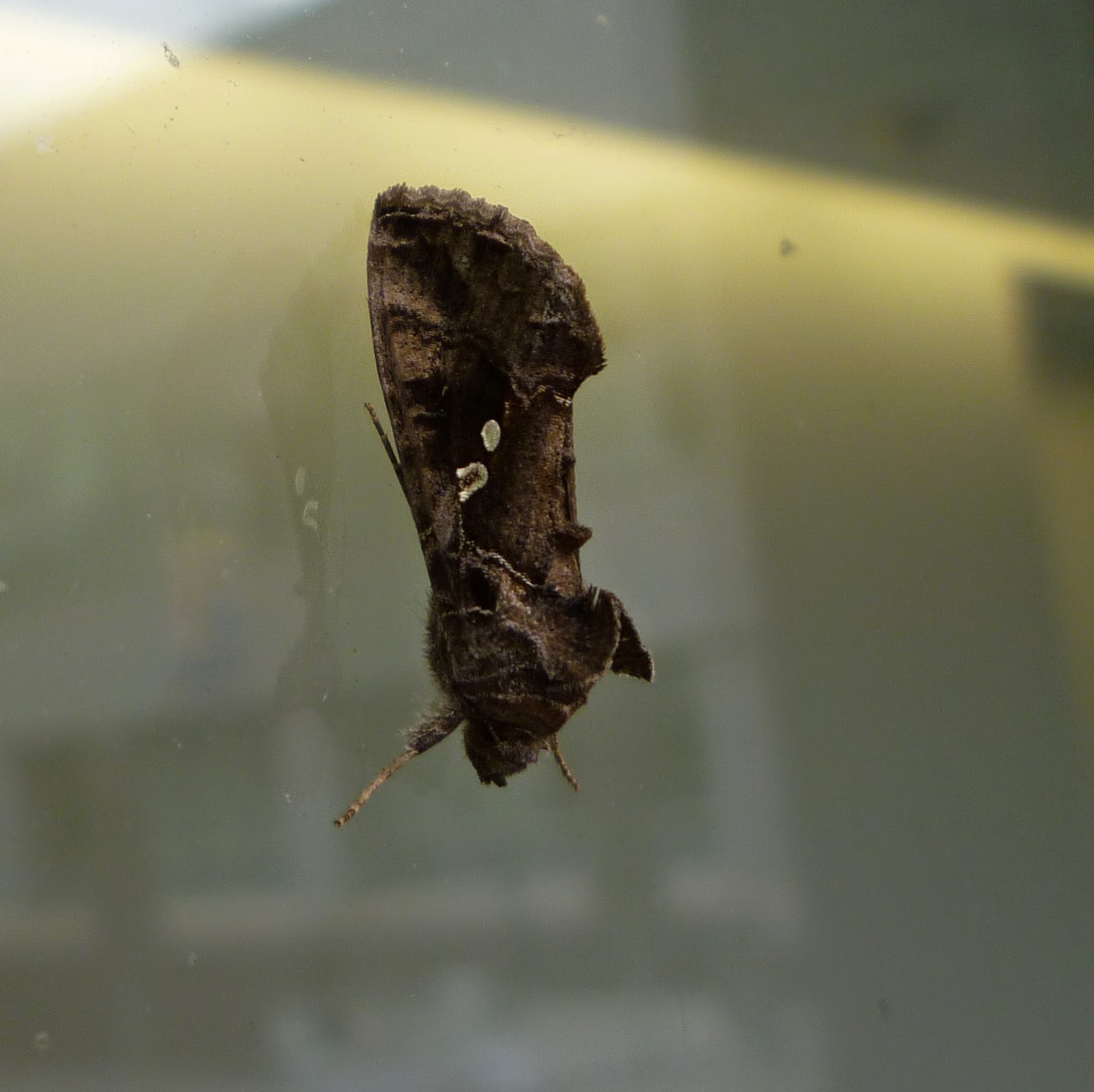 This Black and Yellow Mud Dauber gave me a chance to capture the iridescence of it wings.  This is the species of mud dauber that built its nest of twenty or so mud columns in one of the Bluebird nest boxes at the lab.  That nest is pictured in my July 2014 post.  I've added the following link that shows the number and variety of spiders that the mud dauber paralyzes and stores in each nest chamber to feed its developing offspring.

(link to what mud daubers put in their nest chambers) 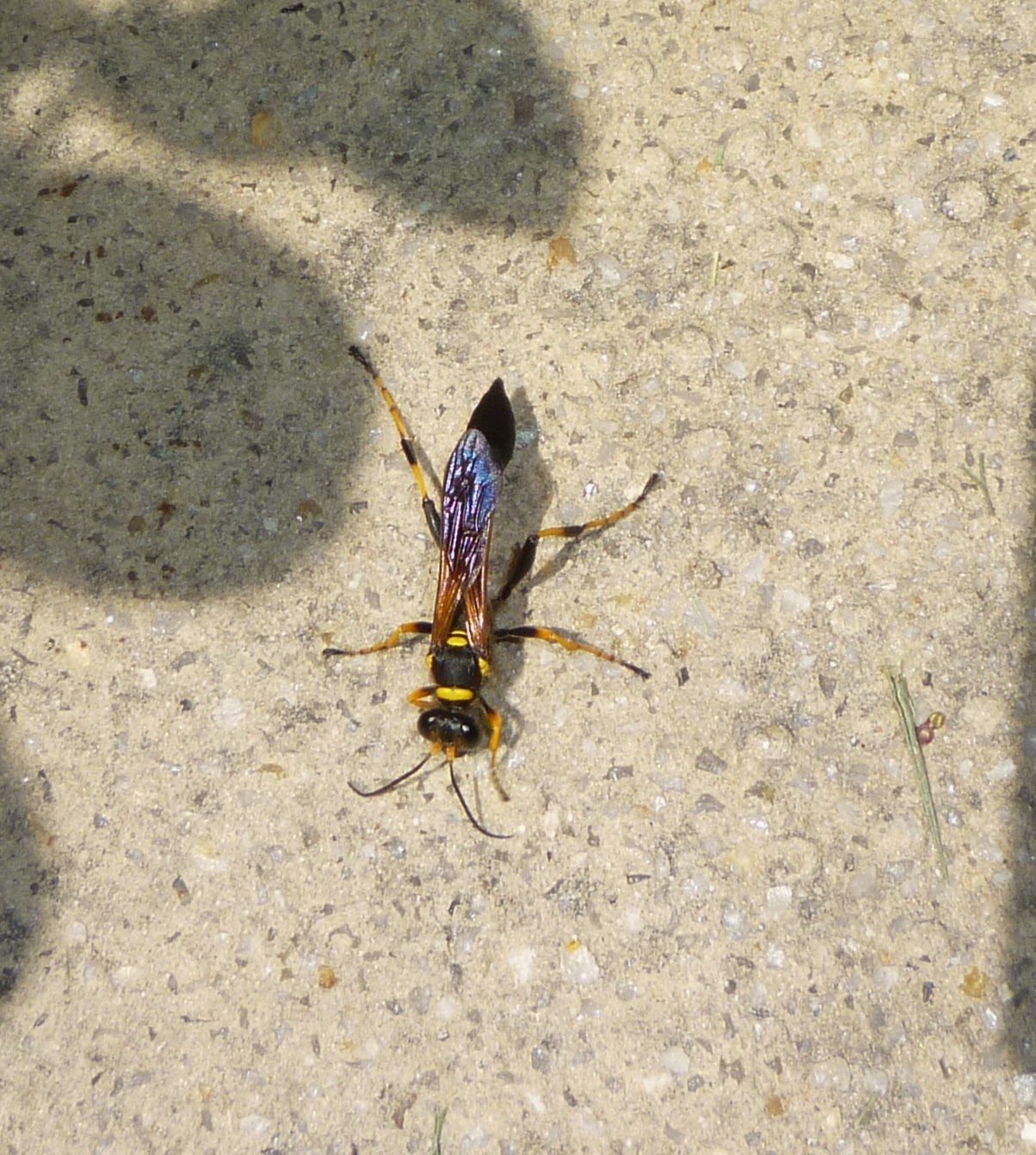 Posted by From Bluebirds to Turtles at 4:33 PM