As I looked out a window at home Sunday afternoon, I saw something small twisting in the wind from a tiny twig of a Winged Elm in the center of the backyard.  This species of elm, which is also called the Cork Elm by the peoples of the Muscogee (Creek) Indian Nation, has two corky "wings" on either side of some of its branches.   You can see one of these branches on the right-hand side of the picture below.


At first I thought it might be a leaf, but the twisting was so constant and so regular. Using binoculars we saw a small bird suspended from the twig. It was so tiny that I immediately suspected that it was the Ruby-crowned Kinglet that had I seen visiting our suet feeders the past 5 weekends as I counted birds for Project FeederWatch (a Cornell University citizen science project).  For more information on this interesting activity click here.

Out in the backyard, I found it was indeed a kinglet hanging upside-down from an elm twig about nine feet above the ground. To reach the bird I needed to bend the twig toward me.  I grabbed the closest "tool" I could find which turned out to be a piece of downed tree branch that was partially covered with muddy red-orange clay.  I "hooked" the appropriate limb and pulled the ensnared bird closer until I could cup him in my left hand. After dropping the muddy stick, I used both sets of thumbs and forefingers to snap the twig from its branch while cradling the kinglet in confines my left hand.  Below is a picture of the kinglet with the twig entangled in its right wing.  Ruby-crowned kinglets are tiny greenish-gray winter visitors from summer breeding grounds in Canada and a few northern states.  They have a prominent white eye-ring that gives them a "big-eyed" appearance.  The leading edge of their primary wing feathers is lined with yellow and they have a white wing bar.  The males have a patch of crimson feathers on top of their heads that is often hidden.  During breeding season and when they are excited, they perk up these ruby red feathers into a sort of crest.


I found a pair of nail clippers and went to work on the twisted mat of feather barbs and barbules. In the picture below the twig appeared to have wedged between the second and third primary feathers apparently as the kinglet flew too closely to the elm.  The terminal bud of the twig is just in front of the kinglet's shoulder.  The yellow leading edges of several of the ten primary wing feathers are visible.


a picture of a twig

diagram of a feather

Eventually, with clay muddied fingers, I was able to remove the twig.  The kinglet's wing looked a mess, but fortunately, the twig had just been lodged between feathers and had not broken the wing. 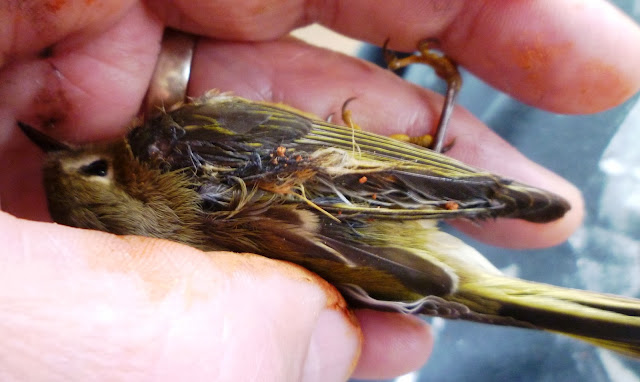 The picture below shows the "offending" twig with remnants of barbs and barbules from the kinglet's primary feathers. 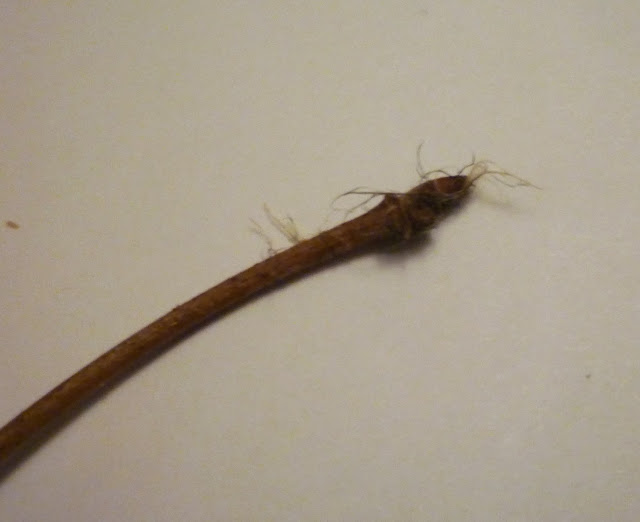 
Before I released the kinglet from my cupped hand, he preened the primary wing feathers a few times to return some sort of order to his wing and to clean off some of the muddy clay.  As I opened my hand, he flew fairly stably to an azalea bush about six feet away. He sat and preened a few more times and then sat motionless.

I left the porch and circled widely around the azalea so I could slowly approach him head-on.  I was concerned that the stress of having his wing caught up in the twig and then being handled by a "giant" might have been too much for him. I pinched off a piece of suet from a feeder as I neared the kinglet. Parting the azalea branches I eased the morsel of suet toward the "little king". To my surprise he took two small pieces and swallowed them! 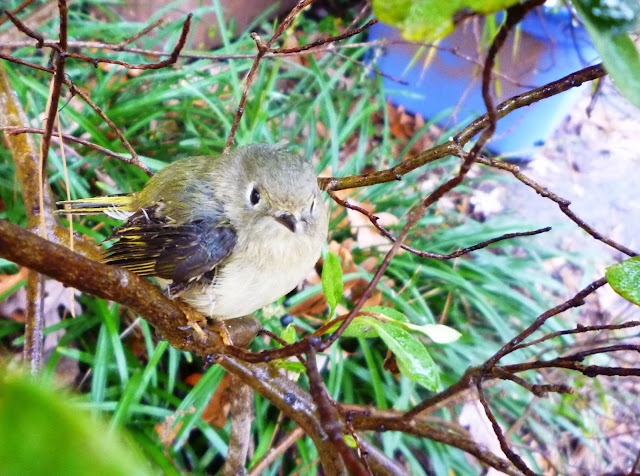 In just a few more seconds he flew off to the row of camellias twenty feet across the yard. Later in the day I saw him back in the area near the suet feeders. I'm hoping he'll make it!  I will be looking for him this weekend as I am "counting" birds again.


For more information on Ruby-crowned kinglets you can visit the links below:

Some beautiful words about kinglets at http://wildcarolina.com

﻿
Some of the information in this post came from these sources.

http://www.muscogeenation-nsn.gov/
Posted by From Bluebirds to Turtles at 1:33 PM